Once we had the sky-cam rigged up, and ready we went back down to the river, hopped on a boat and started getting ready for the night shoot. We were so far away from everyone that I wanted to get more reach and decided to go with the Canon 7D + Canon 100-400 f4.5-5.6 L IS Zoom combo.

Something I immediately realized was that this particular set up is great for "up close and personal shots" (which I discuss on all of my Camera training DVDs). You still need to be somewhat close, but the reach lets you get right in there without them knowing what you are doing. Not possible with a 24-70 2.8 or even a Canon 70-200 2.8 IS L . 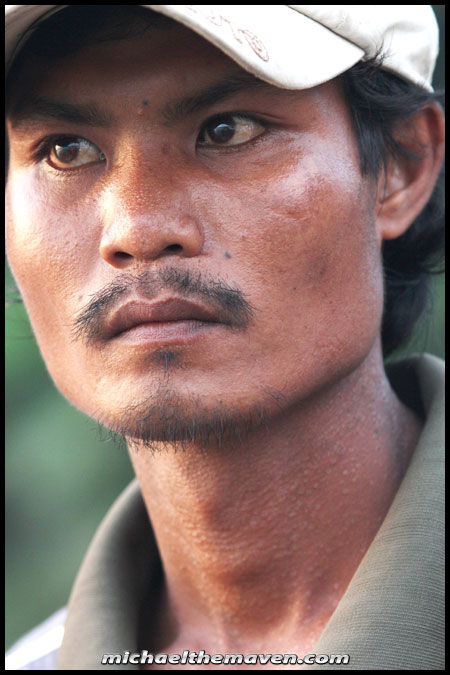 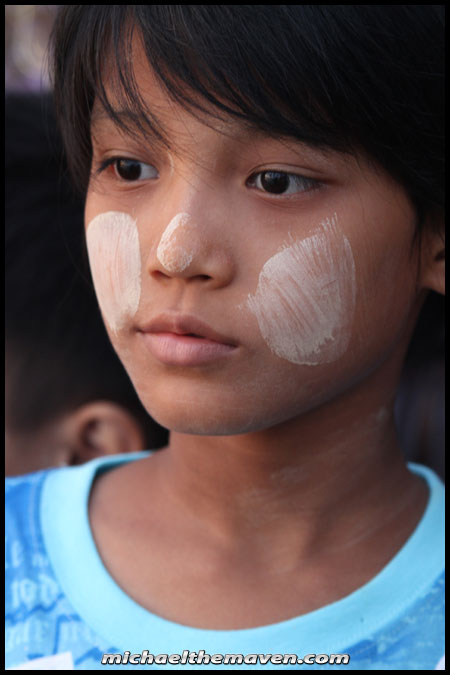 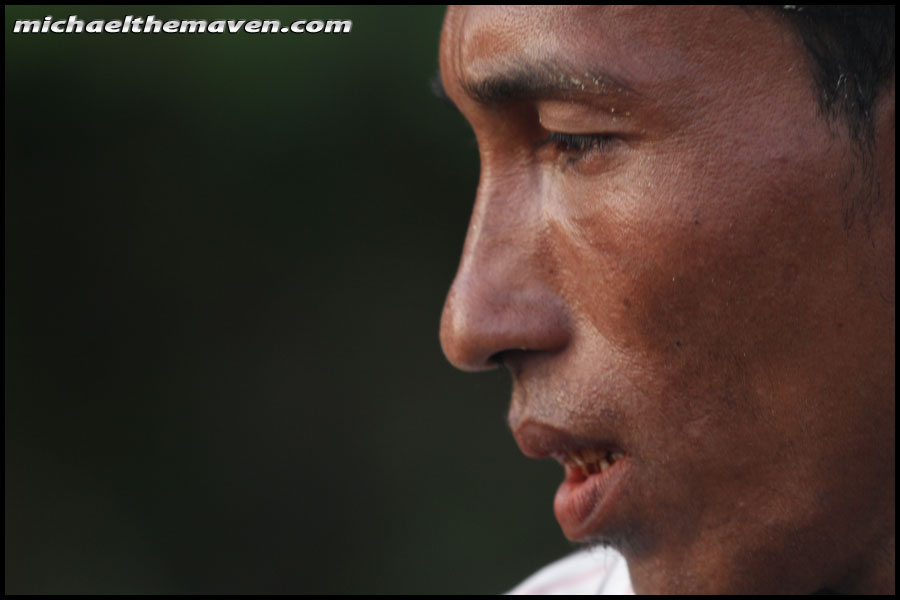 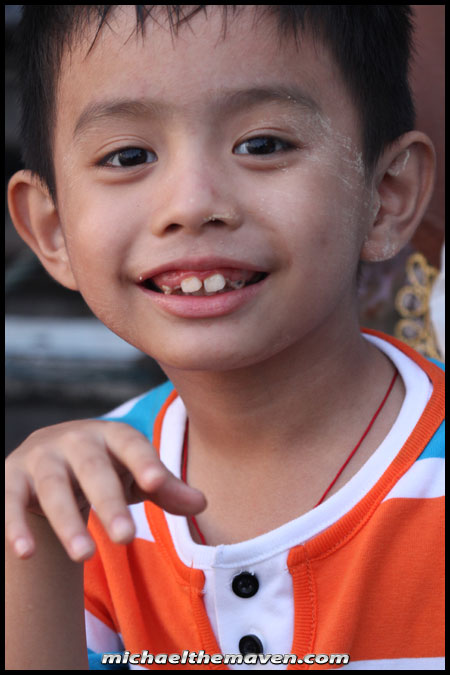 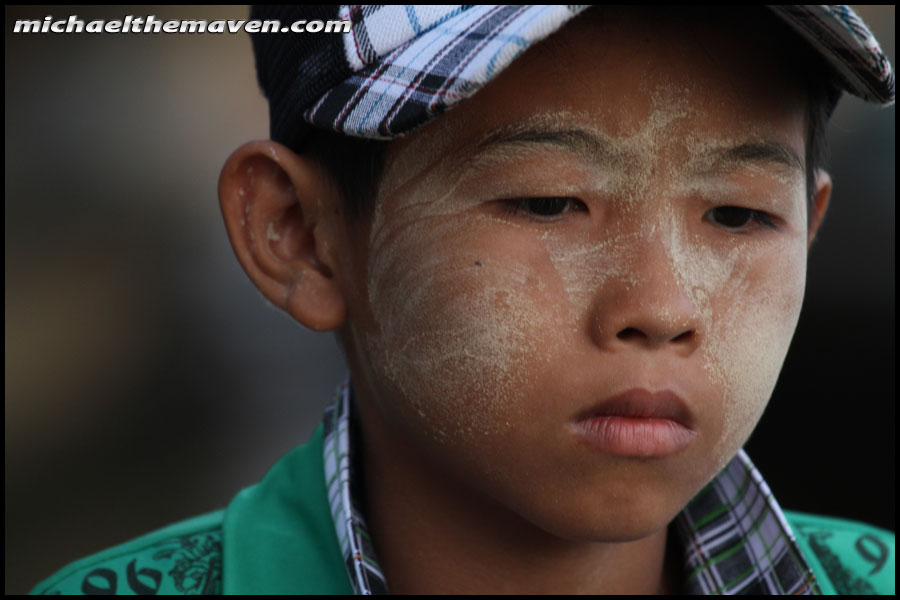 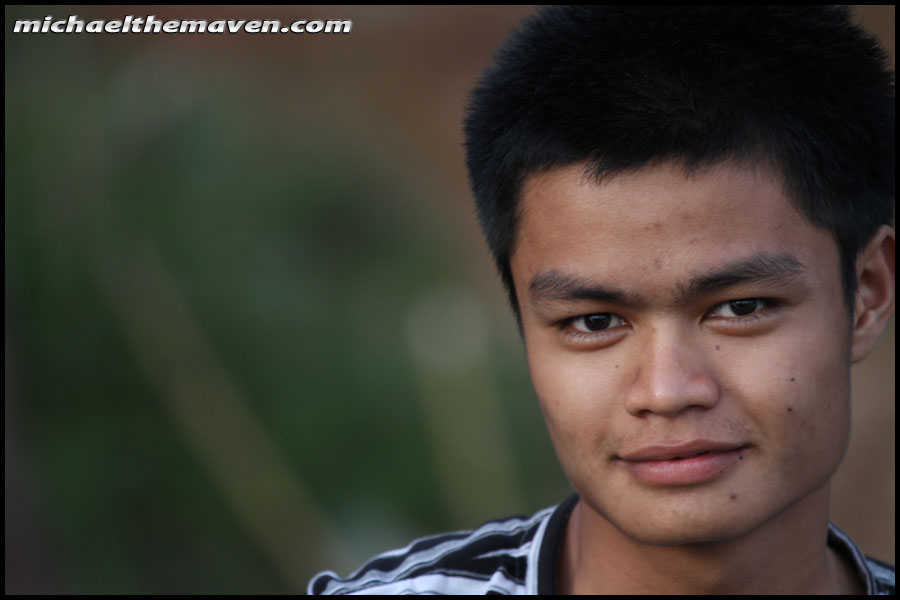 This combo was also really great for getting passing boats, I tried to pan at the same speed which they passed and it seemed to work great. It was also fantastic for getting shots of people on shore. All round the 100-400 proved to be the best for shooting from the boat. 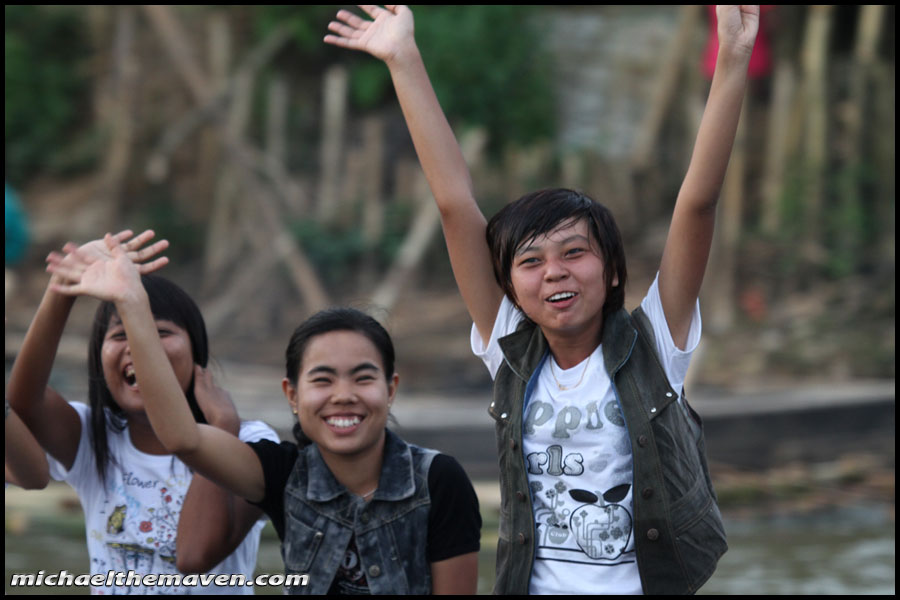 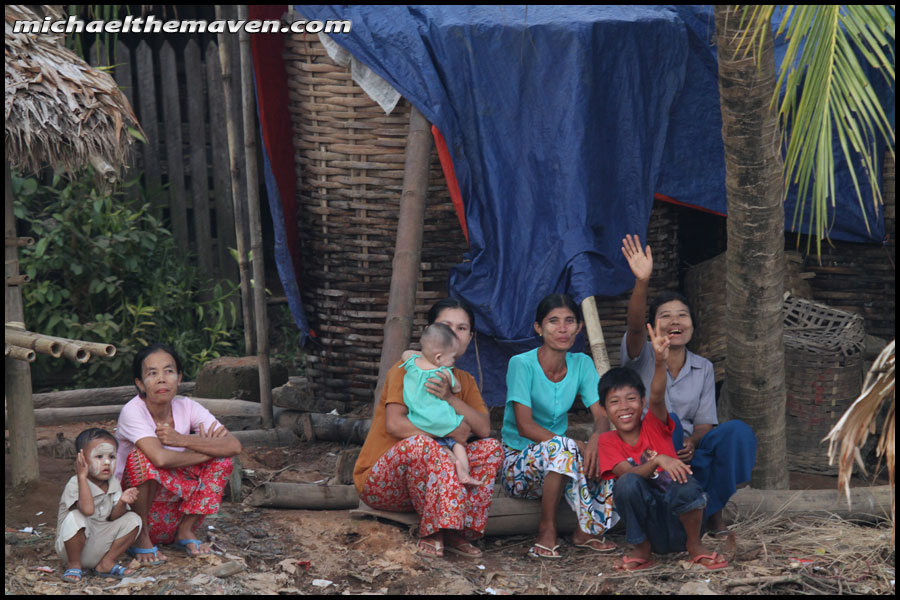 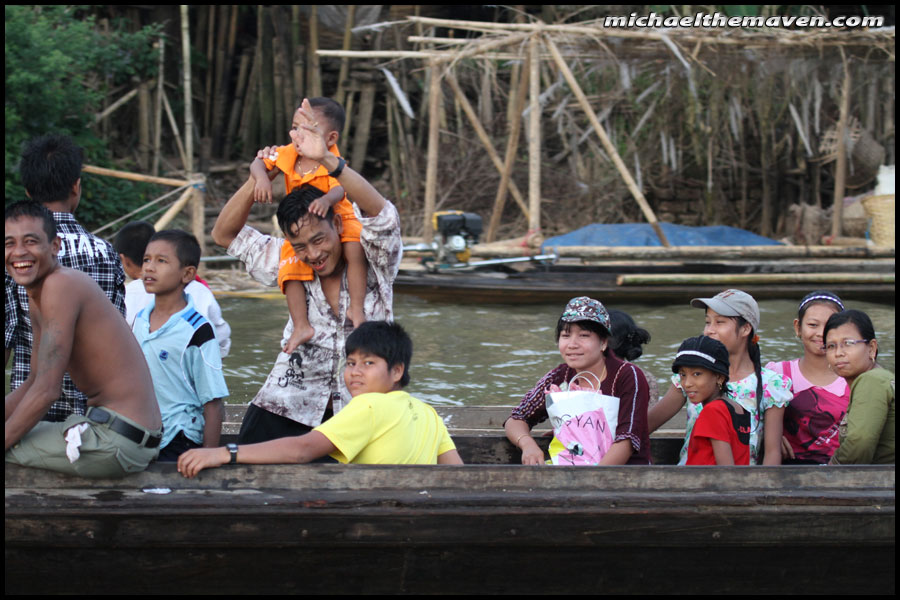 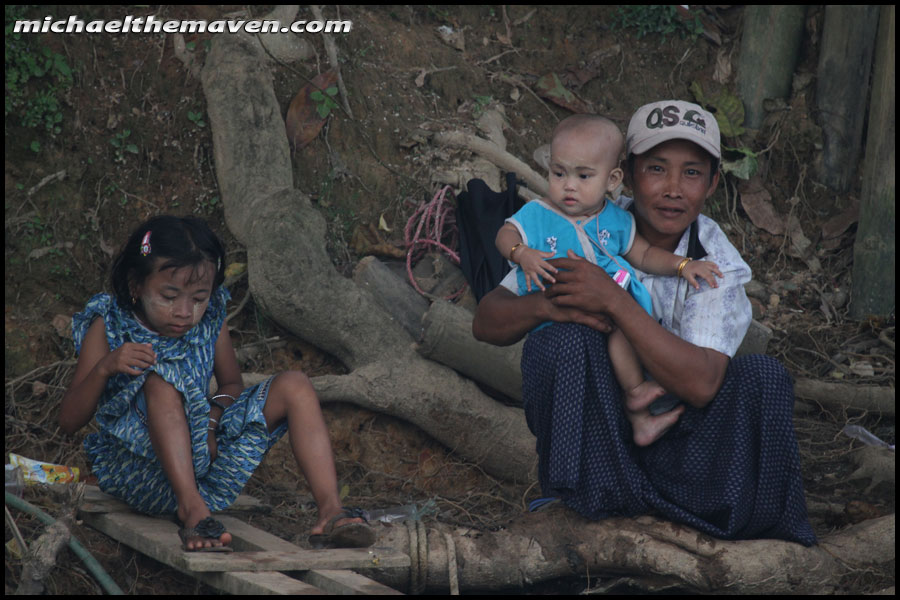 You can see this guys mouth is all red as he was chewing some type of local spice root. It was very common, I guess that is their version of bubble gum. 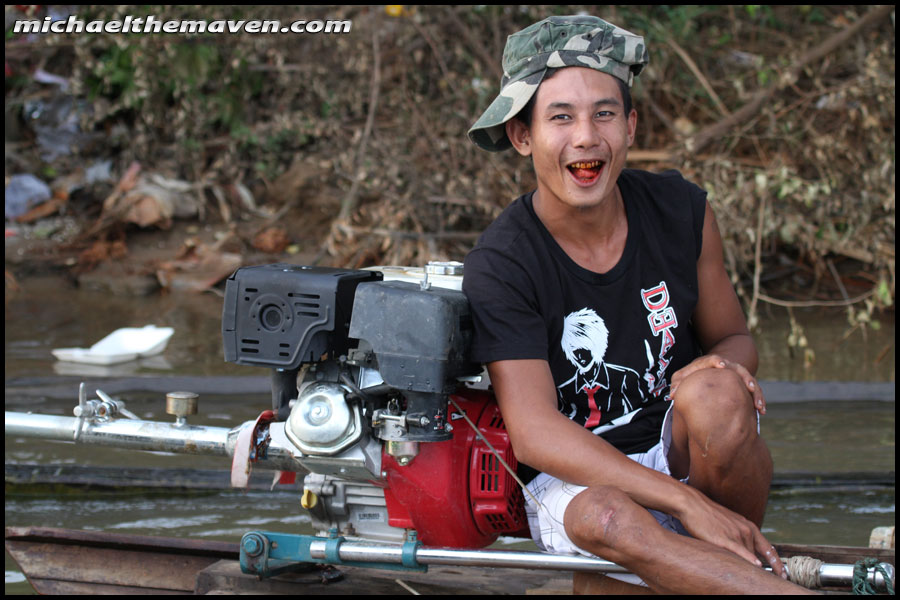 One thing I found fascinating was how they bathed....with their clothes on! It was just how they did it. Taking a bath in the river naked would be a no-no. Bathers would also wash their clothing the same time they themselves cleaned up. It was pretty hot there so, if you have ever felt like just jumping in a pool with all of your clothes on, this is probably the same reasoning they use. 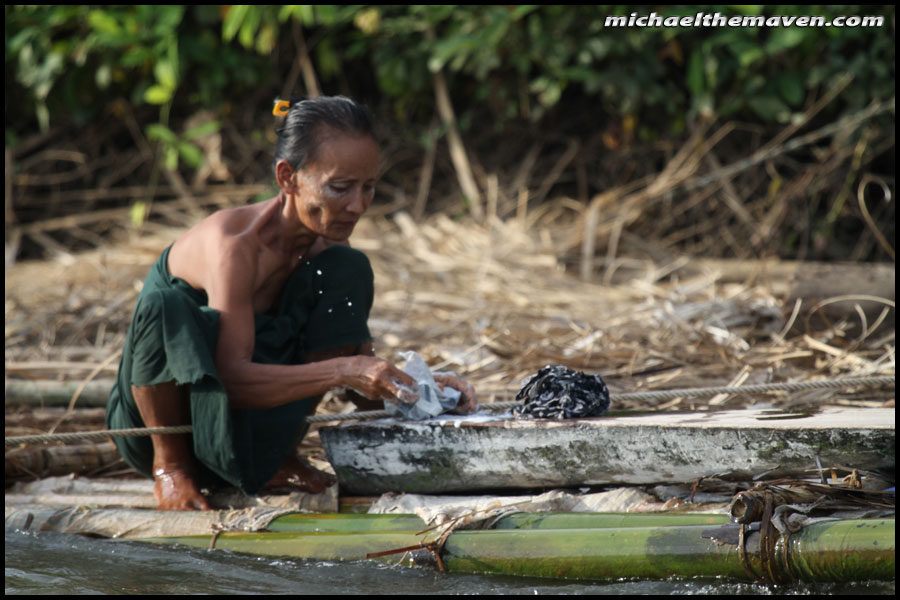 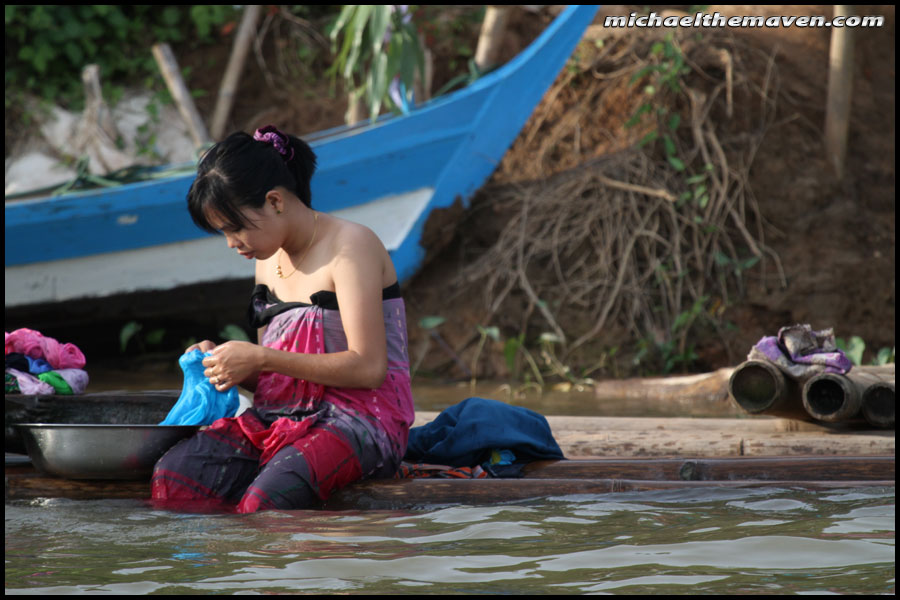 We even go a few shots with the sky cam, and this one was the most interesting. Combo is the Canon 5DII + Canon EF 8-15mm f/4L Fisheye 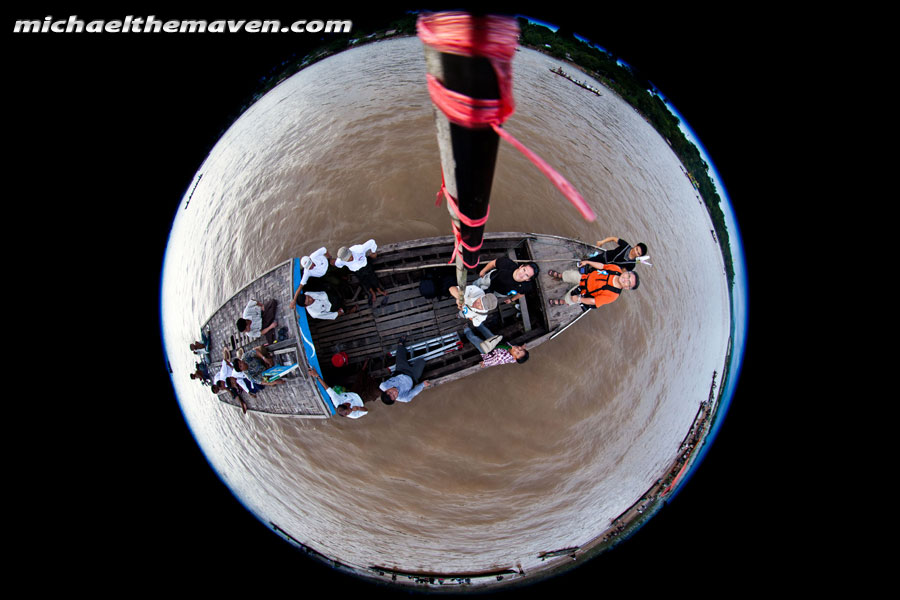 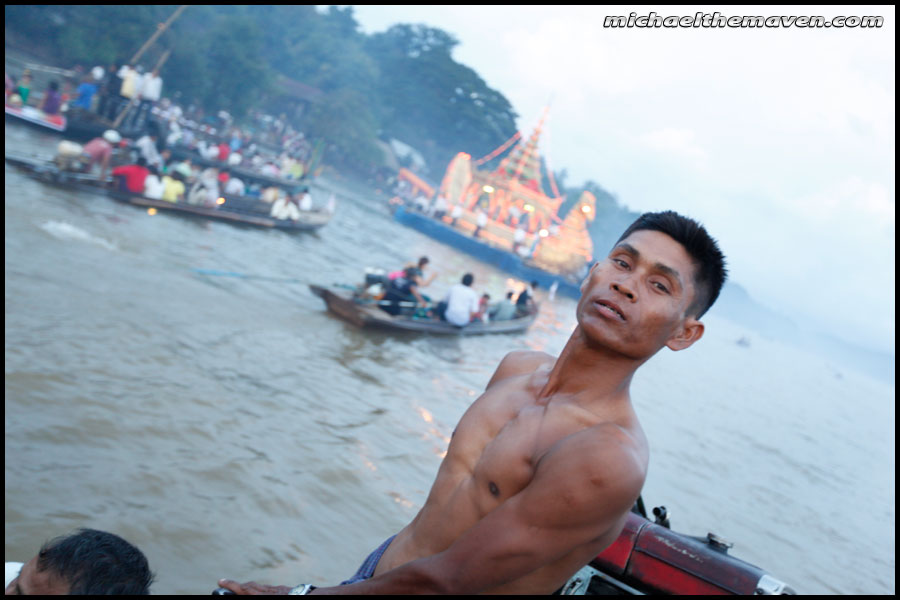 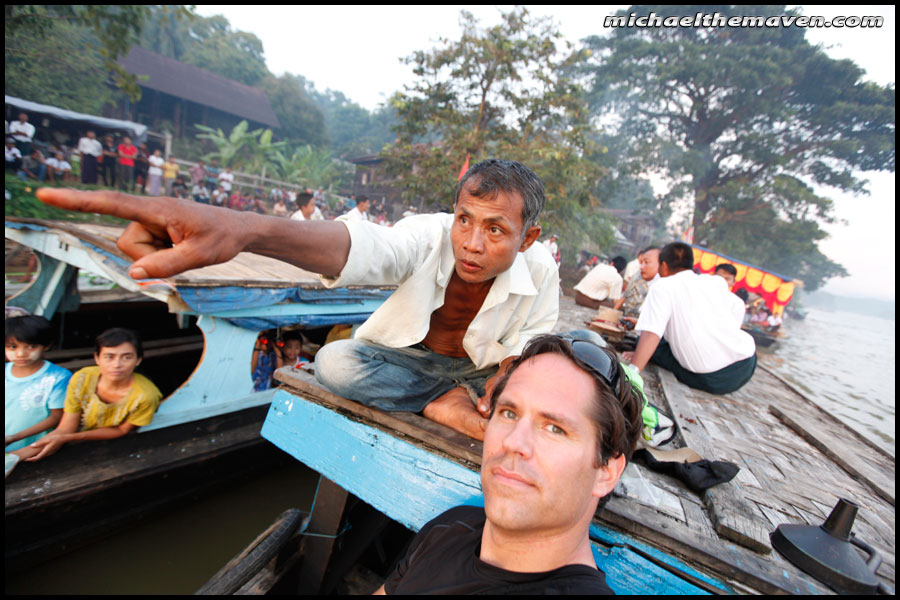 As night fell, candles boats were lit and placed into the river.... 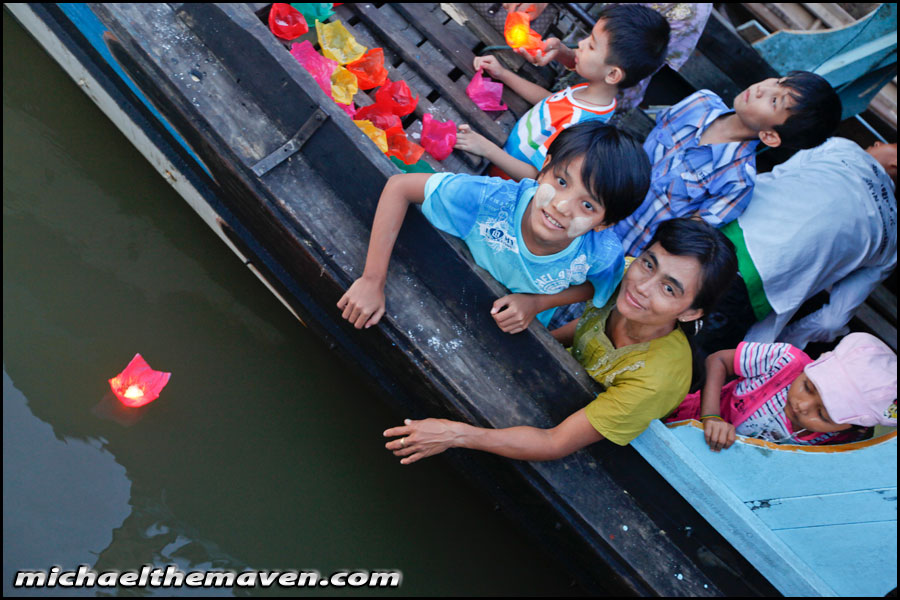 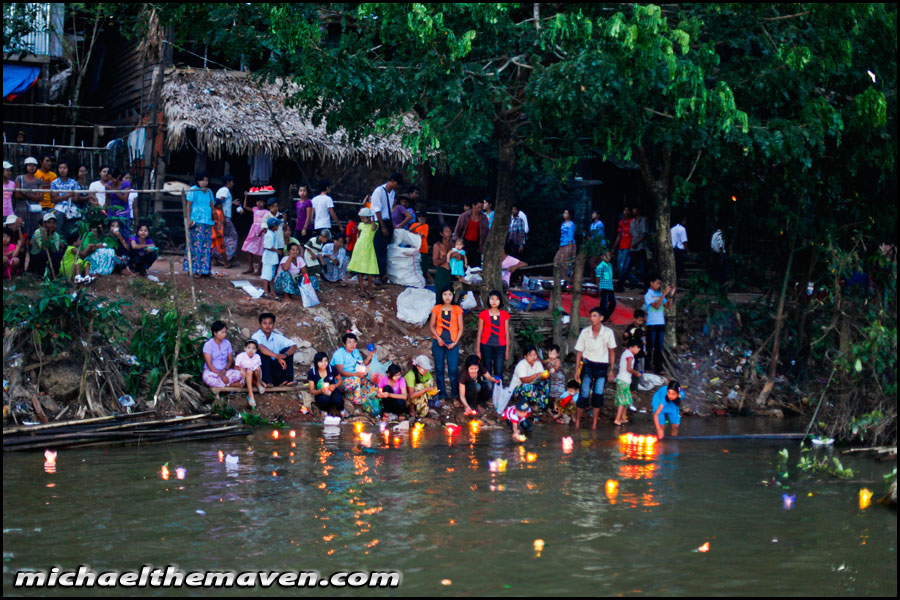 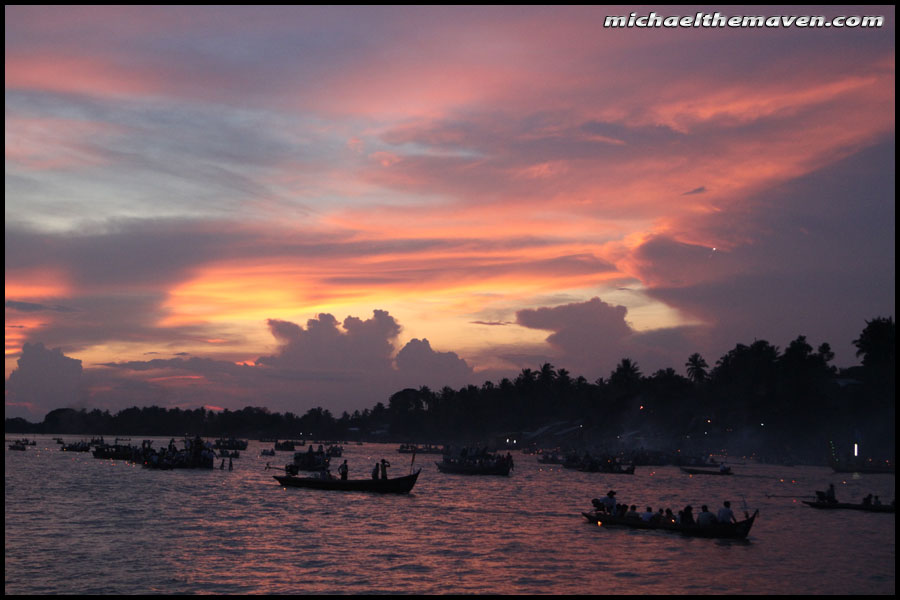 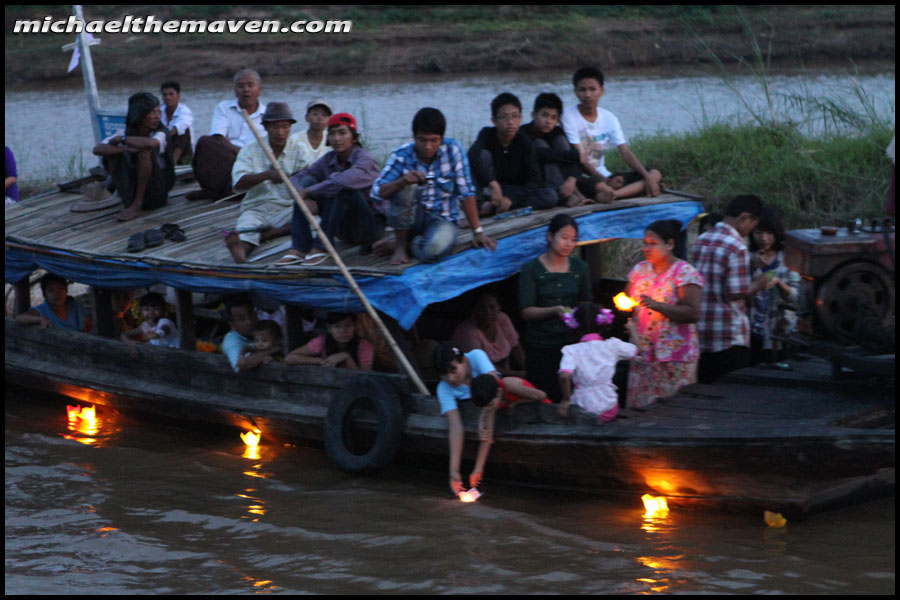 Soon fireworks were going off and I quickly realized that we wouldn't be able to get any decent shots from the boat, as it was rocking way too much and I needed to use a shutter speed of at least a second or longer to get the effect I wanted.

We had the boat pull over on the opposite side of the river and I had to jump with everything I had to land on try ground. Poky followed me, we set up the tri-pod and I went to work. I cannot tell you how thankful I was to know enough about the technical stuff to get set up fast - the fireworks didnt last very long at all and if I was slow, I would have never gotten the shot. 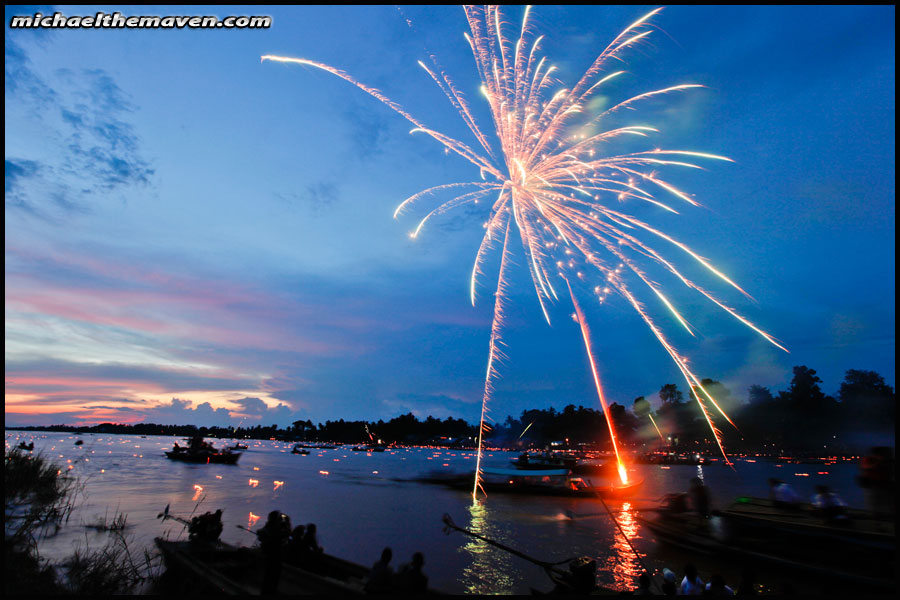 This was my favorite shot of as far as fire works go: 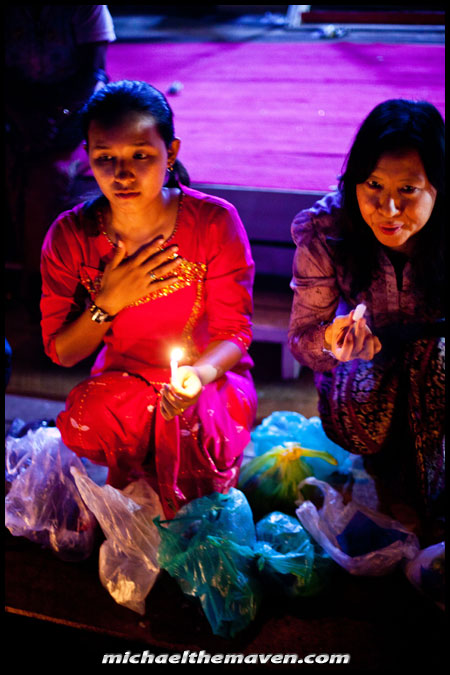 As the night went on the fireworks and candles faded and we decided to wrap it up for the night.... 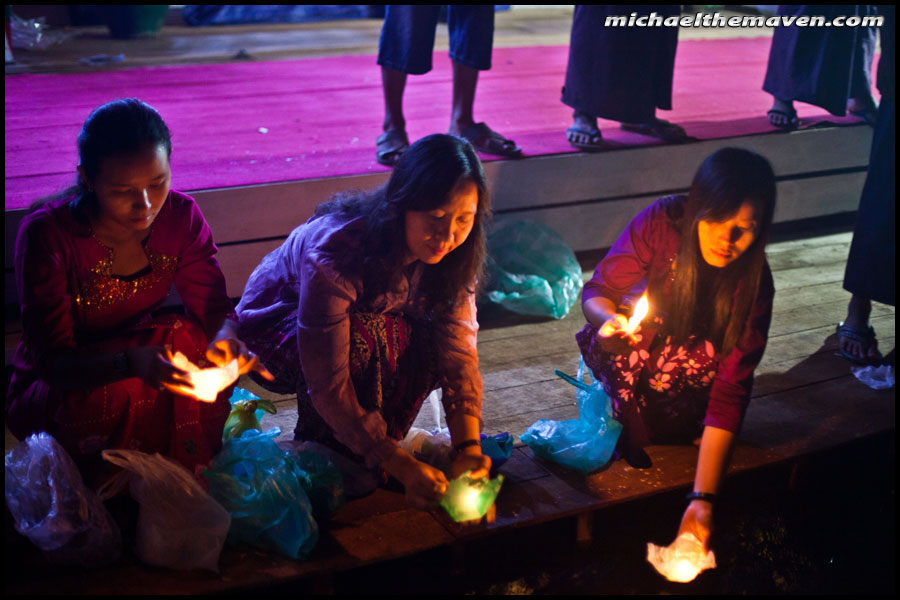 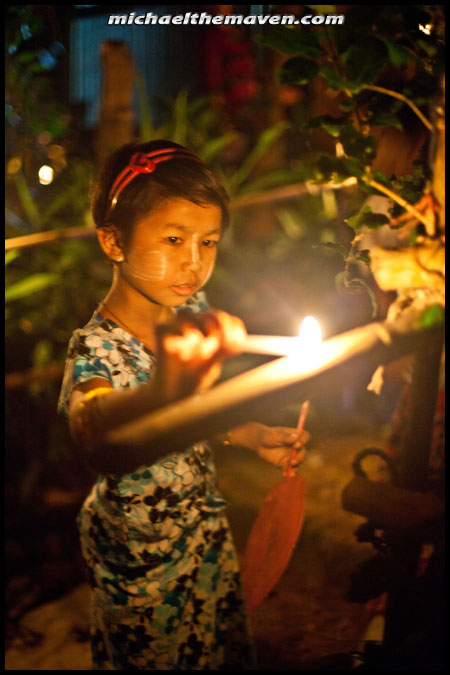 Typical side "street" in Shwe Kyin. 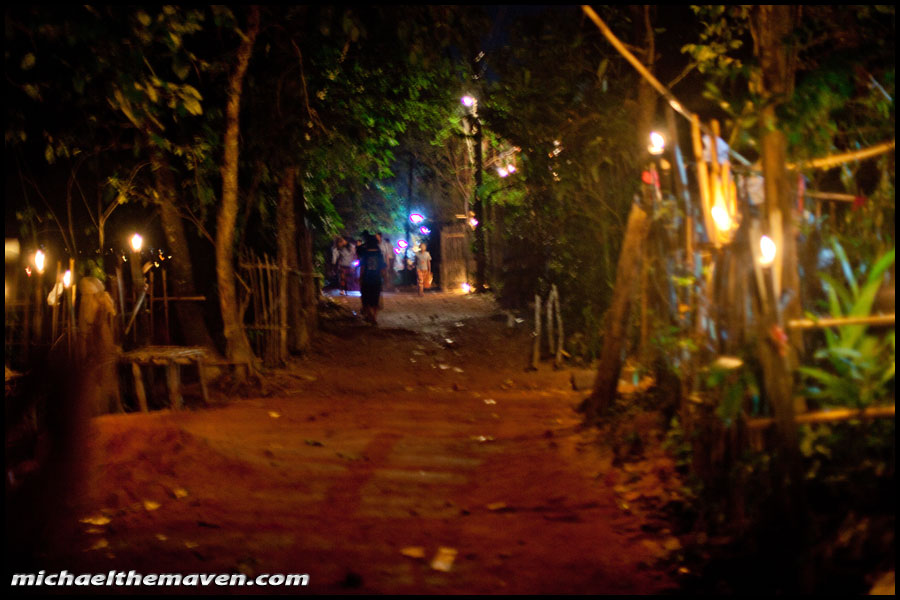 Some families had electricity and would just sit outside their homes continuing to sell what they could...(the "guns" are toys) 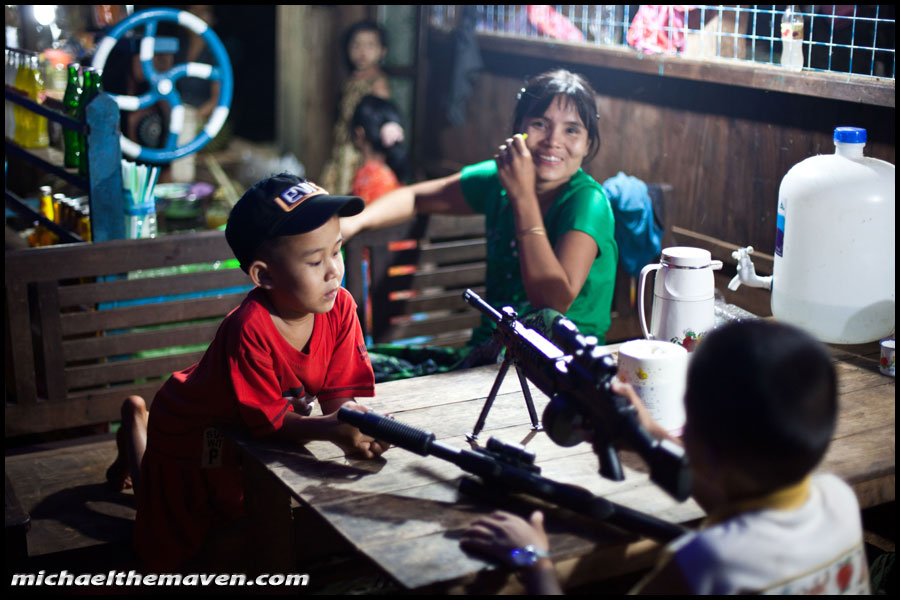 ...but the main street was abuz with electricity and people. It was a long, tiring day...almost immediately after we started taking pictures on the main street, the police asked that we go inside for the night for our own protection and we did so. 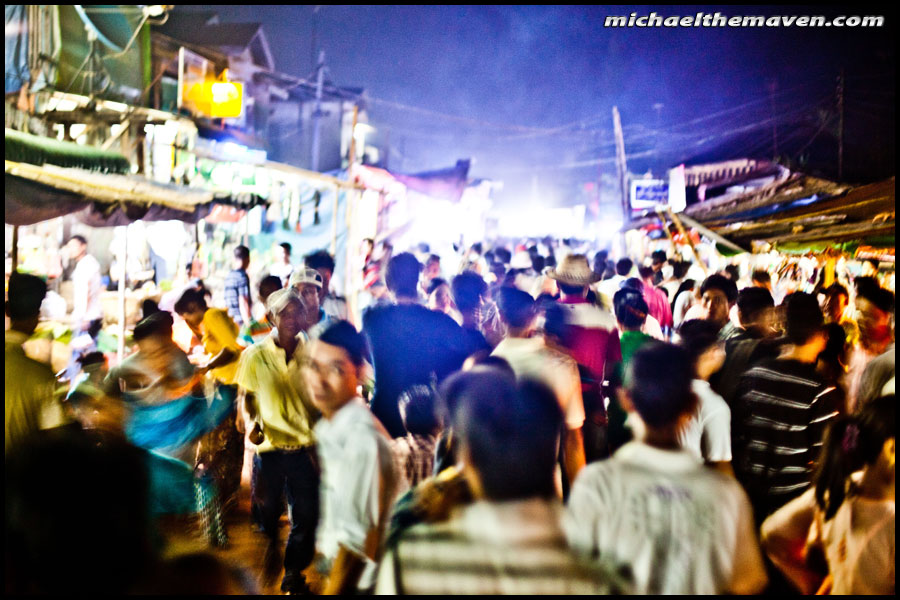