The Truth About Photographers Contract Maker 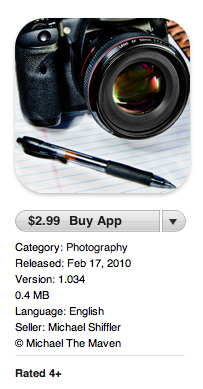 A good friend and customer has brought to my attention that there are a number of very naughty things being done and said to attack Photographers Contract Maker. I apologize because I know in reality that maybe 2-3 people in the world actually care which are me, and the creators of competing apps.

Fortunately, it turns out that my blog is quite powerful when it comes to search engine rankings and I need to clear some misinformation that is being spread to attack my product. Many of you do not know it, but there is quite the war going on now between my app and another. For the majority of my faithful blog readers out there, I would say just skip this one, lol- it isn't so pretty. Ive kinda let this stuff slide for a while and Im not going to take it anymore.

The fairest assessment was given by a Third Party recently, Terry White from Photoshop Magazine, I think he is quite fair in his observations and I accept his grade. You can read the article here: Photographers Contract Maker vs Easy Release

Photographers Contract Maker (aka PCM) was absolutely the first Photographers Contract and Release Making App to the market. It took about 5 months of careful planning, development, testing, retesting to get it right. While I have spent a lot of time in the past developing it, it is not my numero uno concern right now, I have a lot of great things coming, including updates to PCM, and I am learning the hard way that it is not a good idea to discuss great ideas because other people will come along and copy you. This was the reason I was originally keeping it hush-hush for so long.

The reasoning behind PCM was simply that I was sick and tired of not having contracts and releases with me at all times and I knew the iPhone was absolutely the way to go. (And YES, this is me taking credit for this because I busted my a-- developing it.) I wanted a very fast, effective, completely customizable and relatively inexpensive app all photographers could use to customize their contracts and releases. Even now PCM is absolutely the fastest way to get to a contract- this is what I was aiming for.

All the cool little features you see in there, from the syncing with the iPhone Contact list to the custom "placeholders" (yes, even the name "placeholders" was something I created for this app- which oddly are now appearing in my competitions features, as well as contact sync, etc) were something we spent a tremendous amount of time and resources developing. While these bits of code are not new to programming in general, they absolutely were unique and original in the way they were assembled to work within the app and on the iphone. As we saw in the movie "A Flash of Genius" - A similar example would be to say that letters of the alphabet though are not unique in general, can be when assembled into a unique creative written work. What I am saying is I view that little App as my creative piece of work/art that I worked extremely hard to make and I am quite proud of it.

One week after it's release, I posted the next series of updates we were working on, you can still see the original thread here: PCM Updates- Feb 24th Even still at that point, we were the only contract and release maker on the market. I learned the hard way, this was a mistake- I should not (and will not) reveal upcoming features on my apps.

Within a few more weeks, 2 companies released extremely similar type apps, they were:

I have also learned that there is a new app out called "iD Release", which has an animated character talk you through the process (very nice idea). I am and always have been a big believer of pure competition, if someone thinks they can do something better than me, well- show me. This is the true spirit of competition and I believe brings out the best of everyone. I do not have a problem with pure competition. Its the sneaky, underhanded things I have problems with and this is the reason for this article.

Shortly after the release of these apps, a number of extremely curious things started happening. The first was hate mail, which we remember
posted here: Hate Email. My App feedback at that point had ALL been 5 Star ratings, and suddenly I had several 1 star ratings. This is most commonly referred to as "torpedo-ing". I have not retaliated against this, it would be easy for me to find 20 people to buy an app and return the favor, but that is just not my style, I prefer to play fair and all I asked in return was that users who liked my app post feedback and thankfully many of you did. If there is any question at all that an adversary is actively doing this, just take a look at my ratings now: Photographers Contract Maker on iTunes Keep in mind this is just after an update that gave it so many more new features.

This is not something I am not overly worried about for one main reason: Photographers Contract Maker is a seriously awesome app. The product speaks for itself and this is something I count on, I focus on the product, make it the best I can and the rest will take care of itself. If the product is great, it will get great reviews and referrals even from random strangers. Why in the world would I want to spend my time asking people to torpedo another product's feedback? Who has time for that?

It has now recently come to my attention that the makers of Easy Release have posted a comparison chart, and this is where I have finally said enough. You can see their updated chart for yourself here: Easy Release's Comparison Chart - I have also noted they have recently changed their features with their upgrade, but have left my upgrades alone. I looked this chart over and I can tell you right now, nearly all of what it says just isn't true.

It is impossible for me to tell if this was deliberate on their part or if it was a simple error, but whichever the case doing this was unprofessional. Being the creator of PCM, and for the record, these are the facts: 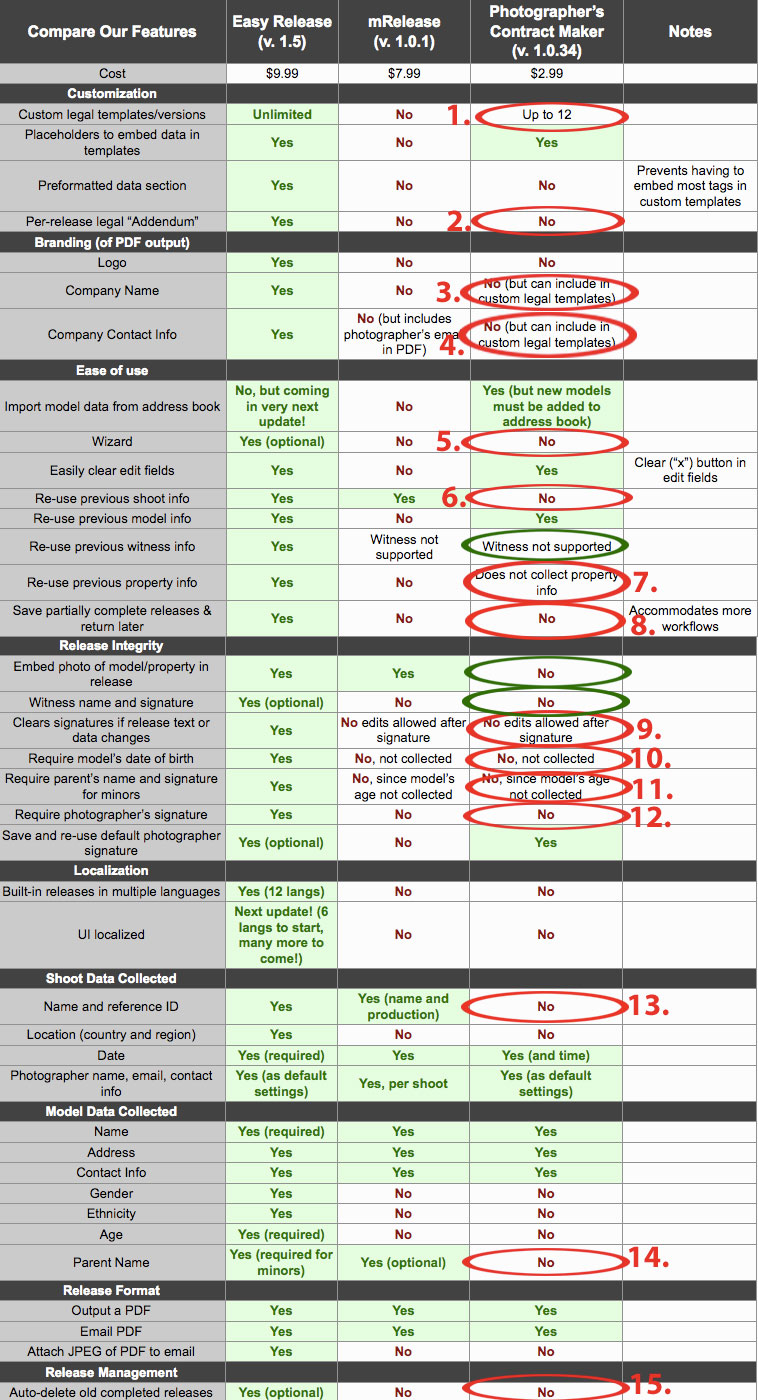 1. Not True- PCM Allows for Unlimited Templates. The App allows for 12 Templates on the Main Selection Screen. Unimited Apps can be stored in the Deleted Template Bin and Restored at anytime. That Said, last I checked, Easy Release works the same way, you have to select which Model and which Property Form you want. How many does their template selection form hold? 2

2. Misleading- PCM allows you to make "Edit Draft" Changes on any contract and therefore, an addendum CAN be added to ANY contract. Easy Release does not allow you to make draft changes, so the band-aid here is to add an addendum to each contract. Again, PCM can do both, Easy Release, only the Addendum.

3. and 4. - Not True- I especially like the disclaimer, first they say no, then they say yes. PCM is set up for Photographers to put their contact information ANYWHERE they want. Thats the way it was designed.

5. While indeed Easy Release has a wizard and PCM does not. PCM doesn't have a wizard is because having a wizard is less effective. Wizards force you to go through extra unnecessary steps.

6. Not True- Any shoot which requires multiple contracts (for multiple talent) can be set up just as easily, if not so faster than Easy Release. If it was me, I would make a template for the one shoot and then crank out all the contracts I needed for it.

7. Not True- Property Releases can be set up just as easily as any other release in PCM. Its just a matter of template design.

8. Misleading- PCM will allow for contracts to be designed and saved as an unsigned contract. Because there are only 3 steps (picking a contract, client and date/time) there is no need to save partial contracts. Easy Release has this feature because they require multiple steps and wizard pages to fill out- not an advantage in my book.

9. Not True. Period- You cannot change the content of a contract once it has been saved. You can go back and edit a template, but this in turn creates a new contract.

10. and 11. Most photographers actually know when they are shooting talent under the age of 18 and therefore would select a child model template for their parents to sign.

12. This is completely confusing- Photographer's Signatures are added only after the client signs. There are times Photographers need to email unsigned contracts.

13. All contracts are saved with a name and date reference.

15. PCM allows you to delete as well as restore contracts at any time. Last I checked the reason why Easy Release has an "Auto-Delete" feature was because you couldnt delete them manually.

We can see why this chart exists (for their marketing purposes obviously), the creators of the chart can either update it to reflect accuracy or they can leave it and continue to try to trick their customers into believing my product is something else. If ALL of these 18 points were each a simple mistake, I understand and now you have the facts. If these 18 points were not a mistake, well then, now there is a record of what the truth is and our customers will judge.

It is hard to calculate what the damage is on misinformation like this, but in any event I will say thank you to everyone who has continued to support me, Photographers Contract Maker and what it is am doing. Yes, I have competition and I can live with it, but do not expect to misinform the public about my products without a response from me.

In any event, I will continue to move forward and create the best products, apps and yes, updates I can think of. They are coming and no, I wont be talking or hinting about them anymore.

Sorry you guys had to read all this, but when someone is saying things about your product that just are not true, it is requisite to defend yourself.