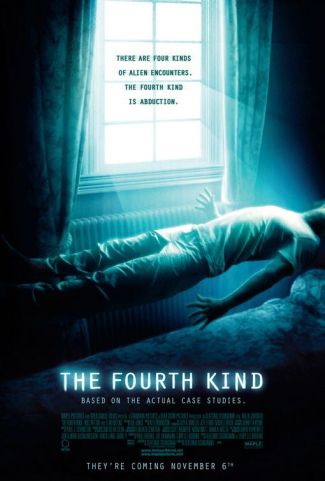 When I saw the previews to this movie, Mila Jovovich, who portrays the main character, preludes with "what you are about to see is based on true events, including the actual documented footage". Having watched this movie with this in mind, it was pretty amazing....I was however a little skeptical of one thing: The interference in parts of the video. How is it possible to have interference (probably magnetic) that effects the video and not the audio. In fact, I had problems with many of the "documented" clips.

Turns out: The ENTIRE movie is fiction. Completely fake. here's the link: The Fourth Kind is fiction

The director, and I am assuming the "writer", Olatunde Osunsanmi, appears in the movie as the interviewer and makes an appearance at the end "testifying" its all true. Turns out, hardly anything from the movie was, apparently his angle was he was making a movie "about a documentary", not a documentary, "a movie about a documentary". Olatunde, I am not a professional filmaker like you (yet), however you broke a cardinal rule in film making: Never Lie to your Audience. This will tarnish your credibility for the rest of your career. If this is difficult for you to understand, please refer to "Never Cry Wolf". Should you ever decide to do a legit documentary, no one will accept it as credible.

Its one thing to lead you audience down a path and let them decide for themselves, (Like the 6th Sense did, which was brilliant), its another thing to tell your audience "this is true, believe what you want" when its not. M. Night Shalyman did something similar in the "Village" by constantly telling the viewer what to think (as in directly) but even he didn't have the arrogance to slap a "this is a true story on it".

I feel embarrassed for having been tricked into seeing this movie. Its pure fiction, and knowing this after the fact greatly diminishes the entertainment value. If it was true, it would have been amazing, but it isn't so skip it!