Update: I have updated language using stop values, instead of EV values to prevent confusion from the absolute EV/LV standard. I hope this clears up the confusion. The results and the performance of the cameras remain unchanged. I welcome constructive criticism as it would be easy to retest. Thanks 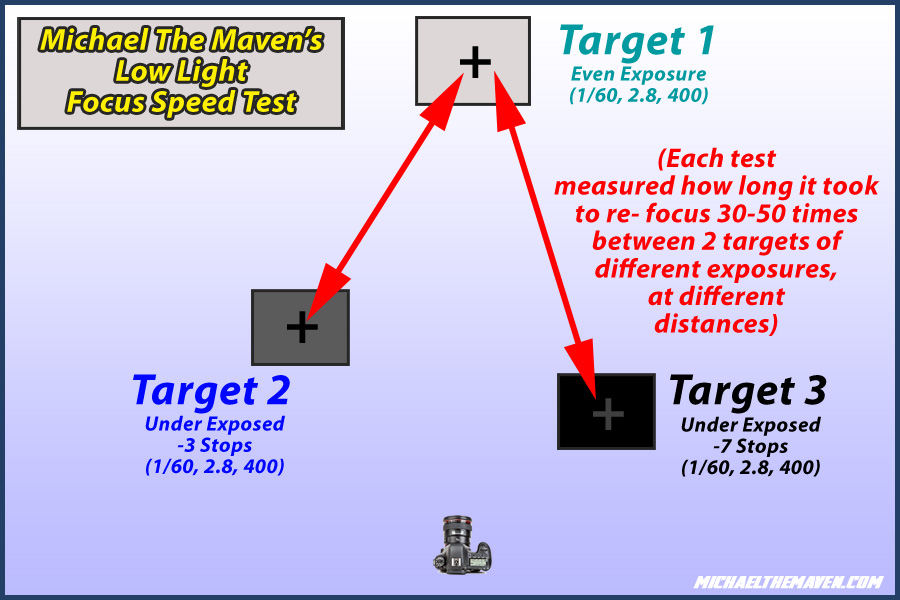 This is going to be a bit of a gear head, nerdy type test which I occasionally do when I am really intrigued with something about a camera or set of cameras. For the sake of all of our sanity, I will bold the important, take home messages so you can skim if you like.

The Canon 6D's center focusing square touts a rather extraordinary low light focusing ability to - 3EV (EV meaning Exposure value, or stop of light), which means the 6D should focus well in darker situations. As a wedding and portrait photographer, I cannot emphasize how important it is to have a camera that can focus in low light, especially in a reasonably quick manner. On paper, the Nikon D600 is rated at -1 EV.

I conducted a series of tests this afternoon at my place, and it will take a minute to explain how this was done for any of this to make any sense. There may even be some flaws, but I believe these results are going to be pretty easy to duplicate under the same circumstances. This was not a test for focusing precision (whether it was tack sharp or not), this was a test of how fast these 4 cameras can focus in low light.

When we focus once or twice between 2 differently lit subjects, it all happens pretty quickly about a second or two, and we may not be able to easily measure the differences. When we focus between the 2 same subjects 30-50 times, it becomes much easier to measure differences in focusing speed.

I set up 2 targets, both were sets of Black Gaffers tape on a white wall.

Target 1 was positioned on a white wall next to an overhead lamp. In the manual mode, it exposed evenly at 1/60, 2.8 ISO 400 (this was confirmed with all 4 cameras). It was about 20 feet away. The reason I chose these settings was because 1/60 is the minimal shutter speed I like to use shooting portraits, and all three of my wedding lenses max out at 2.8. An ISO of 400 gives me some room to play. 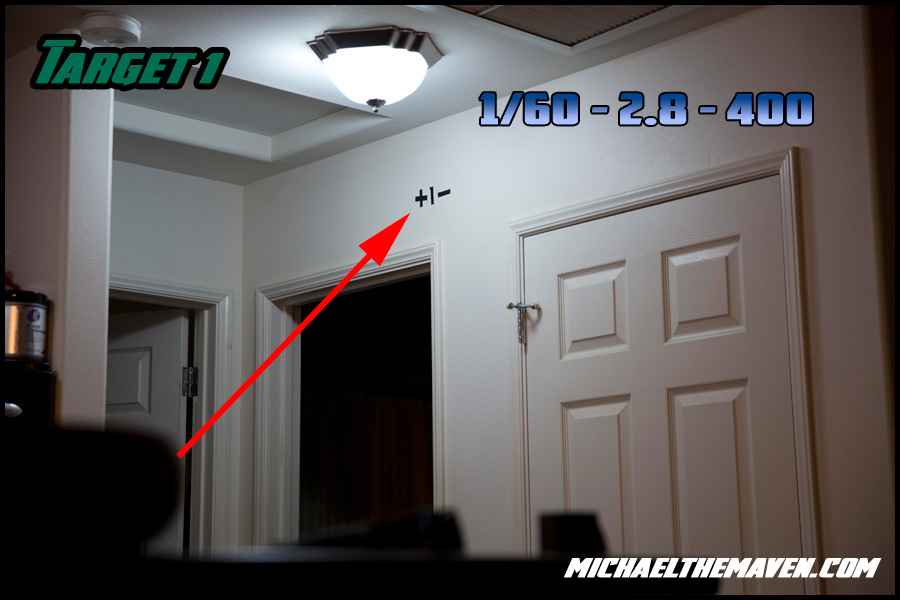 Target 2 was positioned on a white wall under a shelf, about 5 feet away. In the manual mode, it underexposed 3 stops for those same settings. (1/60, 2.8, ISO 400). From plain ol experience, I know most cameras should be able to expose properly on this target, even though it is significantly darker. 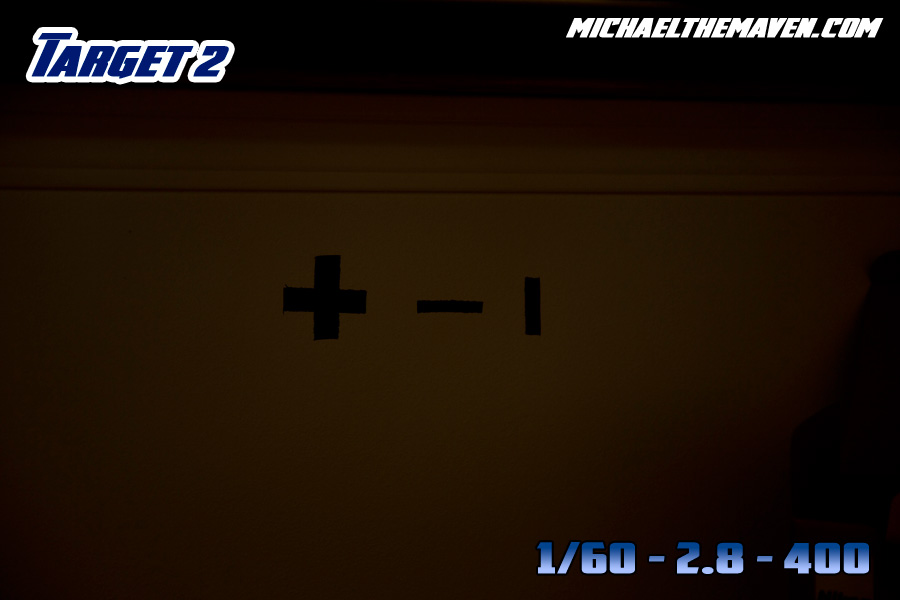 All cameras were using Evaluative Metering, One Shot focusing mode (in the case of the D600 Single Servo). I turned on the "Beep" audio signal on all cameras to indicate focus lock, and I also turned off Nikon's AF assist light for all tests (very important) - none of the Canon's have an AF focus light, & I was interested in the native ability of the focusing systems in low light.

Aiming the test camera at Target 1, I would start a timer and immediately get a focus lock on a "+" gaffers tape mark, depressing the shutter button down halfway until I heard the audio beep confirming focus lock, & I would then immediately aim the camera at Target 2, again pushing the shutter button halfway down until the audio beep confirmed focus lock, then back to target one. For the main test on the center focus square I went through 50 focus locks, and here are the results:

Between Targets 1 --> Target 2, the Nikon D600 was about 10-15% faster. The D600's focusing systems are very good, but I was really surprised with the Canon 5DII . Its a very old camera, but that center focus square is really snappy and quick. The 6D and 5Diii feel like they are focusing in 2 stages, like a quick jump followed by a smaller, refined step. It's probably safe to say that the Canons are all very close.
I wanted to take this further, so I repeated the experiment, only this time, instead of using Target 2 I used a new Target "3" which was on the floor under my desk and required a 2" exposure at f2.8 ISO 400, or ~7 Stops Underexposed with the same settings of 1/60, 2.8 ISO 400 It was also pretty close at about 4 feet, with Black Gaffers tape on a grey carpet. I know from 10 years of shooting experience that this area was dark enough that most cameras would have trouble focusing on anything here.

While I could still see the Target with my naked eye, it was so dark that if I shot it under the same test exposure settings, it was completely underexposed. Even processing in RAW I wasnt able to recover anything: 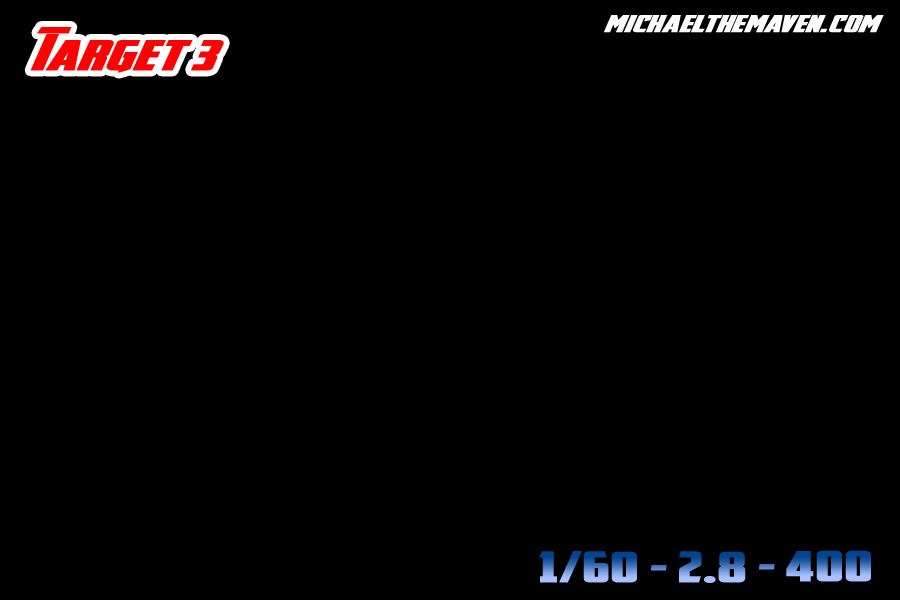 When I reshoot it with the 6D's high ISO, we can easily see it. 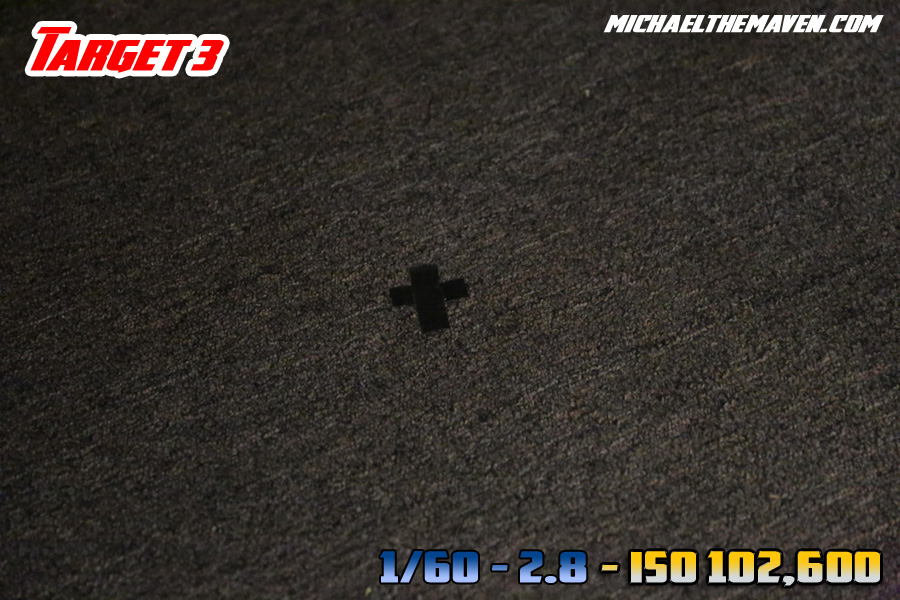 I repeated the central focus point test from Target 1 to Target 3, this time with 30 focusing locks:

There is definitely something going on with the 6D's focusing system on that central square. It is very, very good in low light, about twice as fast as the 5Dii & It even out performs the 5Diii's central square.

The Nikon D600 failed to lock even once without its AF light.

UPDATE : Many readers were extremely bent out of shape over the fact I turned off the AF Assist Light, which may or may not be appropriate for the type of shooting you are doing. Similarly, there were questions about the AF Assist Beam from Canon Speedlites on these 3 Canon models, so I repeated the test. Very interesting results:

Please keep in mind this is over 30 cycles, which translates to:

Whether this is something you can or cannot use is going to be up to you.

It seems to me, that when we combine the 6D's very clean ISO noise, combined with it's native low light focusing ability of the central square, it is an excellent low light performer. Think weddings & social events, street shooters will also love it.

Nikon D600's focusing is going to be better for well lit situations, think any day time shooting, sports and wildlife. If you are ok leaving the AF focus assist light on, you will be in terrific shape.

I am anxious to read about any other independent tests others are doing and would be willing to repeat the test with constructive criticism.

Out of curiosity I also decided to test the very center top most focus square on Target 1 -> Target 2 test for 30 cycles -; I repeated for the furthest right center focus square:

I also repeated the Target 1-> Target 3 test for the Top Center as well as far right center focus Square of each camera: