I have already started breaking down the Canon 5Diii, so far I can tell you this: it's impressive and not a 7D's focusing system in a 5Dii (not even close). I've been shooting with the 5Dii and the 7D since each of them were released. When the 7D came out, I did an ISO comparison test you can see here: Canon 5Dii vs 7D ISO Noise Test

And I also wanted to do a comparison of the 5Diii's ISO with the ISO of the 5DII, and the 7D. There are plenty of images you will find around the internet that show the Canon 5Diii's high ISO in action, and I even did a comparison test as last time which you can see below.

I took a picture of a tripod stand because of the different shades of grey visible. The settings on all cameras were as follows: 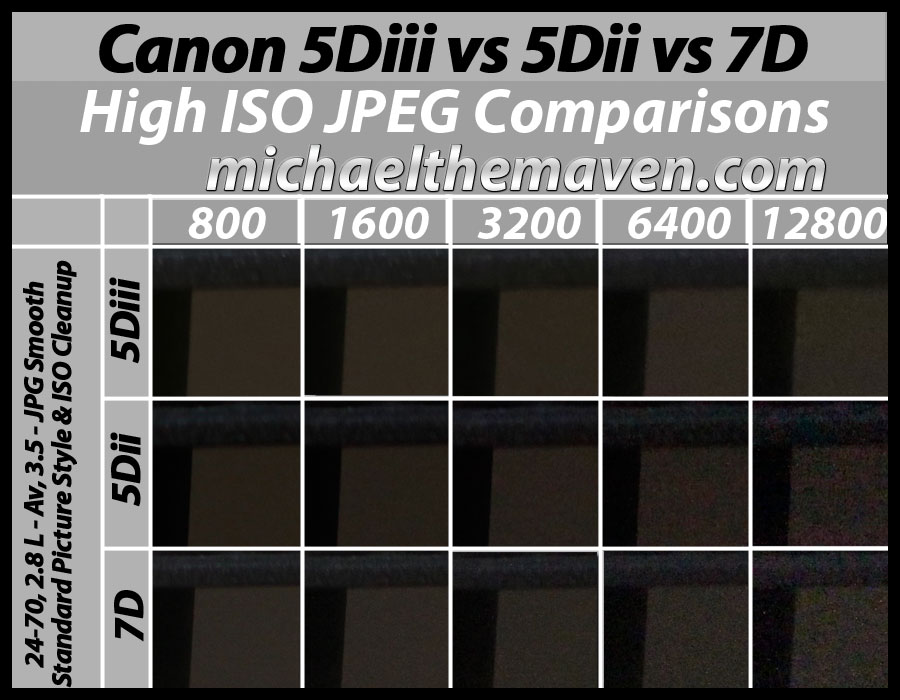 Something I struggle with when I see these kinds of comparisons (mine as well as others) is that subject matter really matters when it comes to high ISO. Some subjects are much more forgiving, others less so. There needs to be a better standard for ISO noise measurement, and if there is I don't know it.

One thing that was very peculiar that I had never noticed before was how the file size increases with ISO.

This makes sense, If two images are exactly the same in all ways, they will have the same exact file size. ISO "noise" has to be accounted for by actual pixels, as more colors and noise are introduced, this also has to be accounted for by the file. Therefore, an image with high ISO noise, will have a much larger file size than an image of the same thing with low ISO noise. Im amazed I never picked up on this.

What I decided to do was to calculate a somewhat arbitrary threshold value where file size increase as a result of high ISO noise renders the image as "unacceptable". Having shot with the 7D and 5Dii for so long now, I have a ballpark idea of which camera is good at what ISO.

To be honest, I have very little faith in the 7D over 400. It just seems to be more noise prone than the 5Dii, but to the 7D's credit, I have used it often at 800 and even published images from it at 800.

Because each of the camera's sensors are also different sizes, I couldn't use absolute file size and ended up charting the % increase for each camera, which I am posting here:

Im pulling a few things away from this data (which, mind you is a very quick and dirty test).

If this information is accurate, what it is saying is the ISO noise from a 7D at ISO of 400, is comparable to a 5Dii at 1600 and a 5Diii at 3200! Or in other words, the 5Diii has 3 stops improvement over the 7D, and at least 1 stop over the 5Dii. (I know Canon advertises it as a 2 stop improvement over the 1D Mark IV, but I am going on "invented" pixels.)

Something that is very, VERY peculiar, is what happens between ISO 400 and 800 on the 5Diii. Perhaps it is an irregularity, Ill have to test this more, but the 5Diii actually improves significantly between 400 and 800 (from 22%, back down to 7%). Its almost as if Canon has a different algorithm kicking in at anything over 400. Ill have to play with this more.

Looking to do more tests tomorrow. but I will say this:

A. There is no question the ISO is GREATLY improved over the 5Dii.
B. The monitor is RIDICULOUSLY sharp on the 5Diii. Its really amazing.
C. The focusing systems are way BEYOND the 7D and the 5Dii.