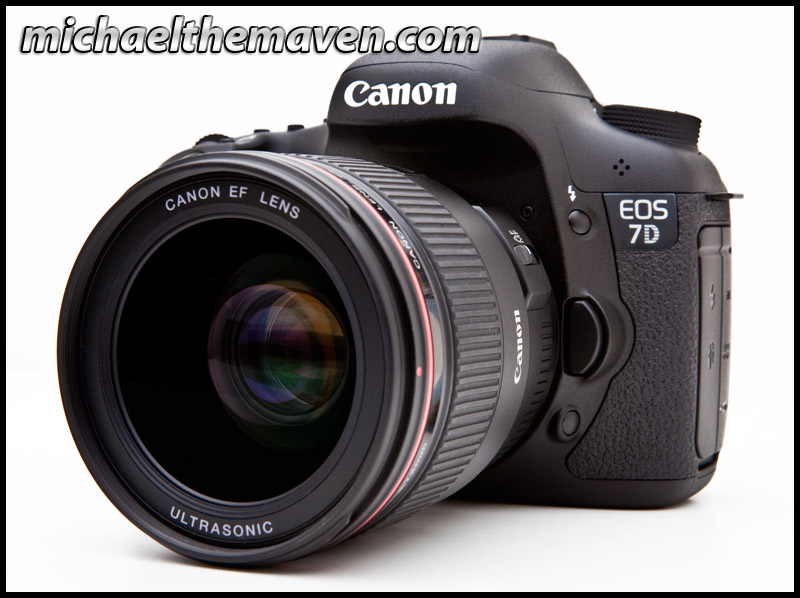 Having owned (and loved) the Canon 5DII since itâs release last year, it has been my #1 go to camera. Today I picked up my Canon 7D and took a very close look at the specs, and started playing with the new features. Granted, not everyone has a need for a photo/video hybrid SLR camera but I do, so I will make a few notes on the video systems as well. Even without the new video features (1080p @ 24 fps), the Canon 7D very well could be a 5DII killer.

First lets start off with the things I DONâT like about the Canon 7D, there arenât many:

I just cant see how Canon will not fix #4 and #5 with the firmware updates. I mean, I might just want to shoot regular old standard def at 24 or 30 fps instead of 60, it should reduce the file size by half and speed up my workflow. Just because I can shoot HD, or at 60 FPS, doesnt mean its ideal for the job.

1. The FOCUSING Systems- OFF. THE. HOOK. Greatly improved. Many, MANY different focusing options. Works much better in low light than the 5DII. The guy at the camera store tested the Beta and he said itâs the best heâs ever seen in ANY Canon model. For me, this alone is HUGE and a potential time saver with workflow (nailing focused images instead of having to take many moreâ¦just in case)
2. High Burst doubles the 5DII speed, 8fps vs 3.9 fps
3. Built-In Speedlite Transmitter- (The equivalent ST-E2 runs about $300, which if you discount off the camera, puts the price of a Canon 7D around $1400, not to mention the bag space you save)- Transmitter can control: Channels, Groups and Ratio controls (Up to 1:8). To me this feature was really impressive.

These 3 main improvements make the Canon 7D a very attractive camera when compared with the 5DII, the rest of this stuff is really just gravy, but its some tasty gravy at that! ☺

4. RAW â JPEG Button (If you are shooting in one, press this button, and you will shoot in the other as well, automatically goes back after a few seconds)
5. Exposure Compensation is now +/- 5 EV, vs typical 2. Bracket shows 3, but it works up to 5.
6. View Finder Grid (you turn it on or off in your menu) â To me this was awesome, makes you wonder what else they can do with this feature.
7. Copyright Info Embedding
8. Battery Information (Percent), shots remaining
9. Electronic Level (You can see it in LV too!)
10. Improved Spot Metering (2.3%)
11. Selectable Aspect Ratio Selections - Shoot in 8 x 10!!
12. Customizable Buttons- like all of them. Not Just Shutter and AF-On, DOF- Preview, Pop-Up Flash, etc
13. Uses same batteries and charger as 5DII.
14. Variable Frame rate HD (24-30fps) on 1080p â very nice.

As far as photography goes, again, the only 2 real things the 5DII has is Full Frame and extra low ISO. To me that just doesnât warrant an extra $1000- Does it to you?!?

On the flip side, with the greatly improved focusing systems, built in transmitter and shooting speed, the 7D absolutely will out perform the 5DII for sports/action shots. I donât want to jump to conclusions, but Ill be taking it out either tomorrow or Thursday to test the image colors for portraits and colors (Full Frame typically samples colors a little better). If the colors are comparable to the 5DII, I just donât know why anyone would even want a 5DII.

The 5Dii is an amazing camera, don't get me wrong. I will be hanging on to my 5DII...for now. If you are considering it or the 7D, I would highly recommend taking a very close look at the 7D, my initial impressions are that its a very good overall camera.

Looking forward to shooting with it as soon as possible! Ill post the images when I can.

What it boils down to is this:

If your goal is to shoot amazing portraits, landscapes or you doing very technical type video shooting that requires shallow depths of field and manual audio controls for video, you will want the 5DII.

If you are primarily shooting Nature, Sports and need a decent camera for portraits, go with the 7D.