Im a few days behind on my 365, so I wanted to do a catch up day, besides, what happened yesterday was pretty amazing.

About 2 hours after the river picture (see Day 201), I am driving through Montana, minding my own business, listening to the newest Borne Identity Audio book and I catch a glimpse of what appears to be....a FREAKING BEAR maybe 50 or 60 feet on a hill not far from the road. I wasn't sure if my eyes were playing games on me or not- just the chance of what I thought I saw might be real....was worth pulling over (immediately) and getting some proof, because if you dont have proof, you cant really believe what you hear. Im sick people saying they saw a bear or big foot or the actual JAWS and they never have any pictures!! Not me...Im all about what you can or cannot prove and thats all that really matters in the end.

I grabbed the 5DII, slapped the 70-200 on it, and started heading back to the general area I saw him. Normally, Id like to use a 1.6 body for zoom shots, but the battery on the T1i was a little low and didn't want to risk it dying on me.

I knew getting out of my car and walking on foot back to the place I saw a FREAKING BEAR probably wasn't the keenest of ideas, as I would probably just be a giant meat marshmellow for this guy, but I really REALLY wanted to get the shot so I threw precaution out the window and laughed at it too. I walk back about 100 yards and lo and behold, there he was! I couldn't believe it!!! He was just out there chillin by the road, so naturally I start taking pictures! I mean...we are just two creatures in our elements, he is out hunting for something to eat...Im a photographer, this is what happens when talent collides!

The amazing thing is.....he sees me and then starts walking towards me!! Im thinking...."Is this really happening? THIS IS SO AWESOME!!!" . The distance between us starts getting smaller and smaller, down the hill....still towards me and stops just before the ditch that leads up to the road, I would say it was less than 20 feet from where I was standing. Mr. Bear stops, shifts his weight to his back legs and gets an eye lock on me...like some kind of staring contest and then he starts to make this growling sound....20 freaking feet away from me!!

Now, not to worry....Ive seen this before and I decided to let my experience just take over, which it did. I know when first time models get in front of the camera, its natural for them to be a little nervous, so I figured maybe this was the case with my bear friend, and I just started talking to him as I continued to snap away. "Mr. Bear you look awesome! What have you done with your hair-its FABULOUS!! Have you ever considered a career as a professional model?" and just keeps on growling at me so I keep on taking pictures and keep on talking to him: "Hey Mr. Bear...could you turn your head a little to the left, the light is giving you some really flattering shadows on your face."

The amazing thing is after I say this...he stops growling, and he DOES IT!! Turns his head this way and that way, being a little bear diva-model he is, like it was some dream or something (which I might add is a very typical type dream for me).

After a good minute or so of shooting, I couldnt be happier with the shots I had so I gave him a thumb up and say "Dude...you rock! Great shoot! Ill have my people call your people". And I put the camera down. This was a mistake because he then stands up on his hind legs, puts both claws into the air and lets out this thunderous freaking roar and I can smell an awful stench of what smelt like dead meat. At this point, I was getting a little nervous but what do I do? I pick up the camera to get him in this truly awesome "im-going-to-eat-you-now" pose and right as I get the camera up, he gets down on all fours. I missed it!! Man I was sooo bummed about this as, obviously I cannot ever prove that it actually happened- but the whole thing was so surreal, I was thankful for the proof I did have. He looks at me for another 10 seconds and then starts walking away.

Im thinking, "wow-I just had a bear pose for me". I walked back to the car and was so happy that I took this in lay picture for a 365, this is me reviewing the bear pictures literally 5 minutes after this all went down. I never felt like I was ever in any danger, though I couldnt help to keep my eyes peeled for a pack of them coming out of the woods, attacking me, and dragging me off for dinner, which if happened- I assure you, I would have gotten some great pictures! :)

I was a little disappointed I didnt have someone else there with me to see everything I just told you because I realize it may be hard for you to believe. Heck I wouldnt believe it if I wasnt there. In any event, I do have plenty of pictures and plenty of PROOF! ya BaBy! :) Check out my favorites! 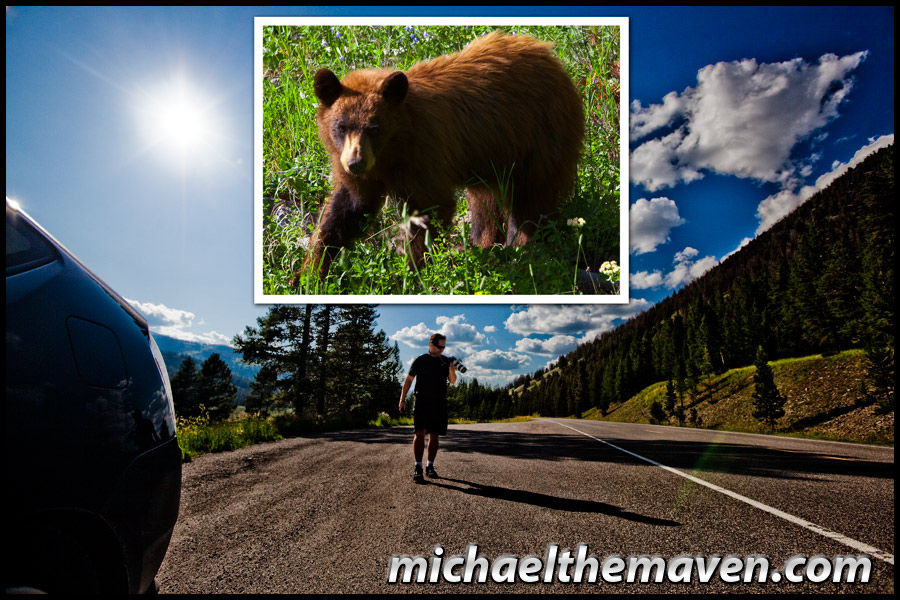 This below picture is when the bear started to approach me coming down the hill..... 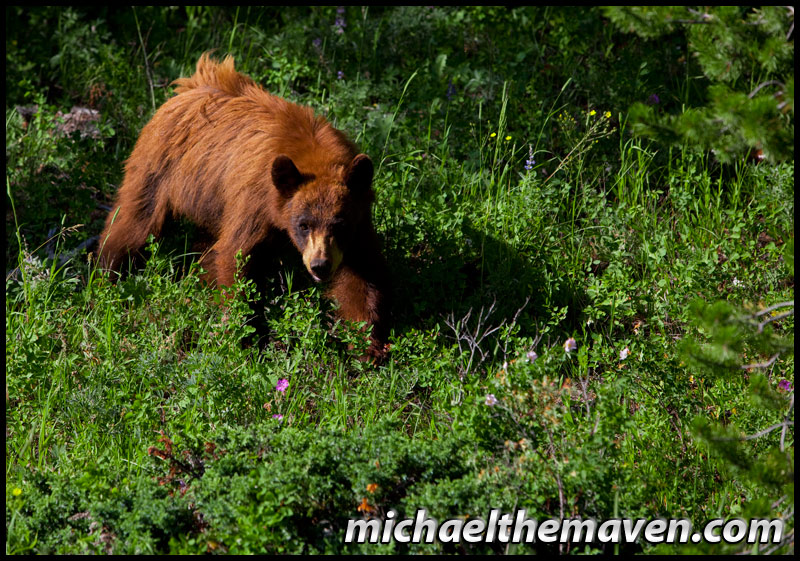 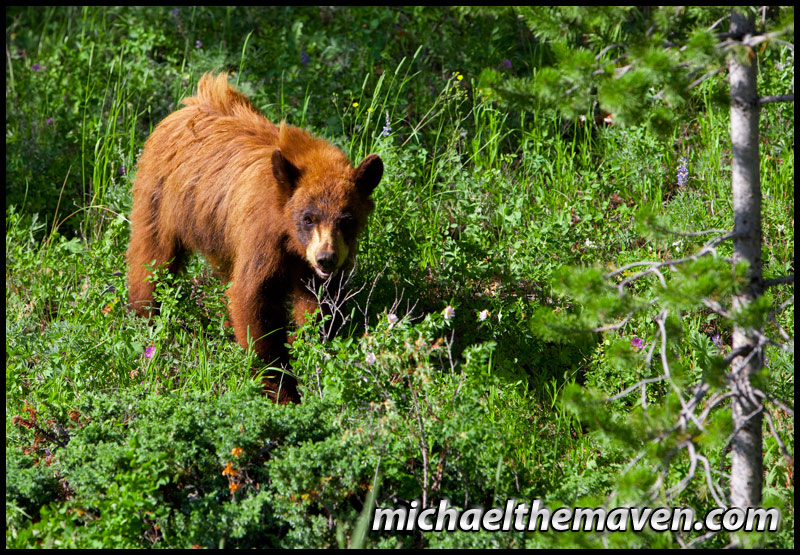 This was my favorite of Mr Bear when we were having our stare down contest. Mano-a-Mano... 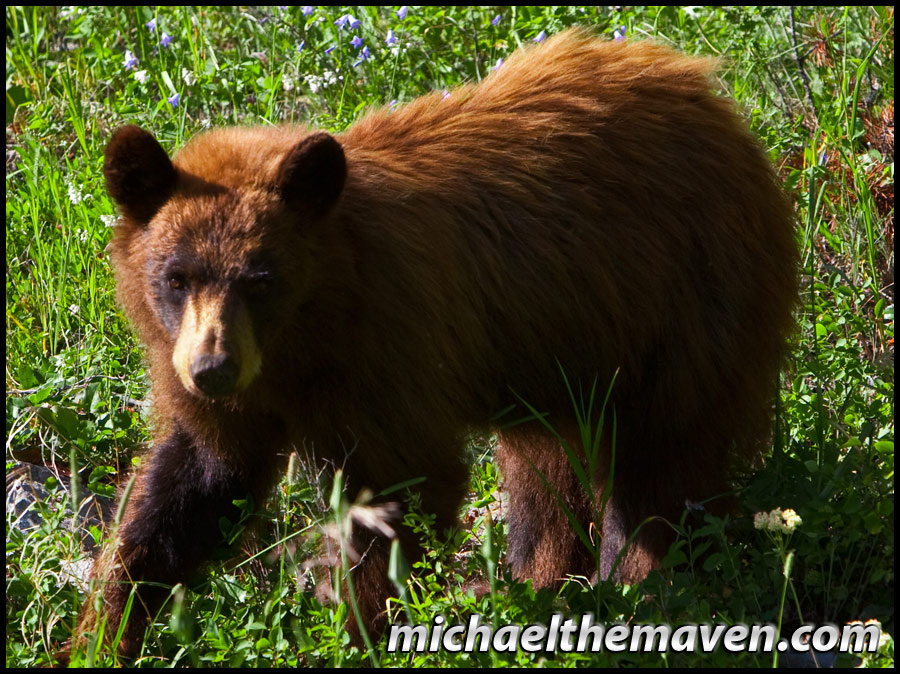 This is when he turned for the camera.... 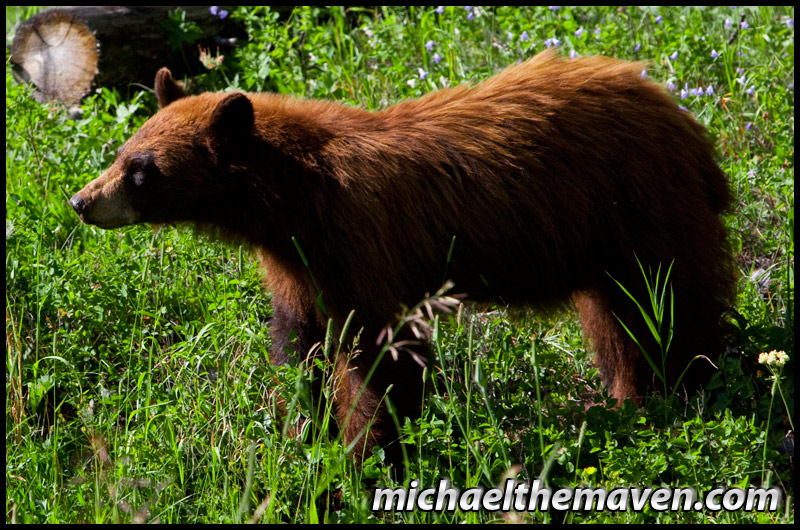 This is when the Bear realized he had just lost the stare down and put his tail between his legs, metaphorically speaking. 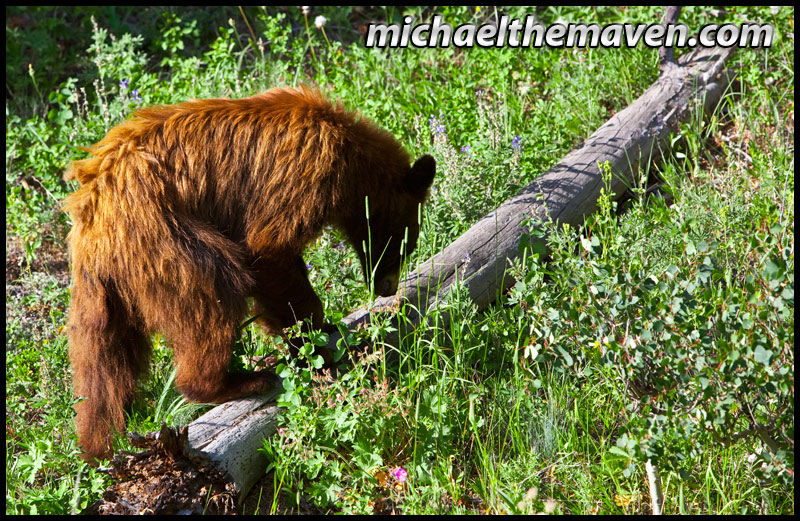 This is where Mr Bear shows us his tail between his legs in actuality, as he crawls shamefully away into the lonely dreary wilderness after losing his battle with Michael Andrew. :) 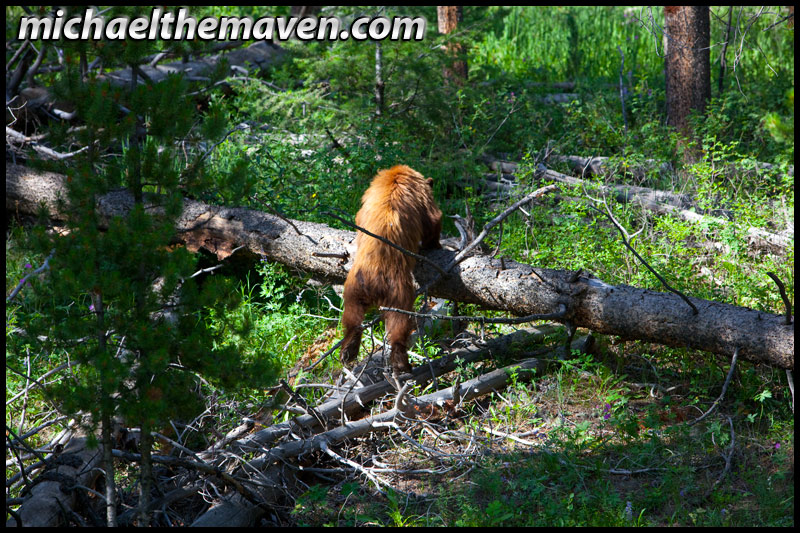