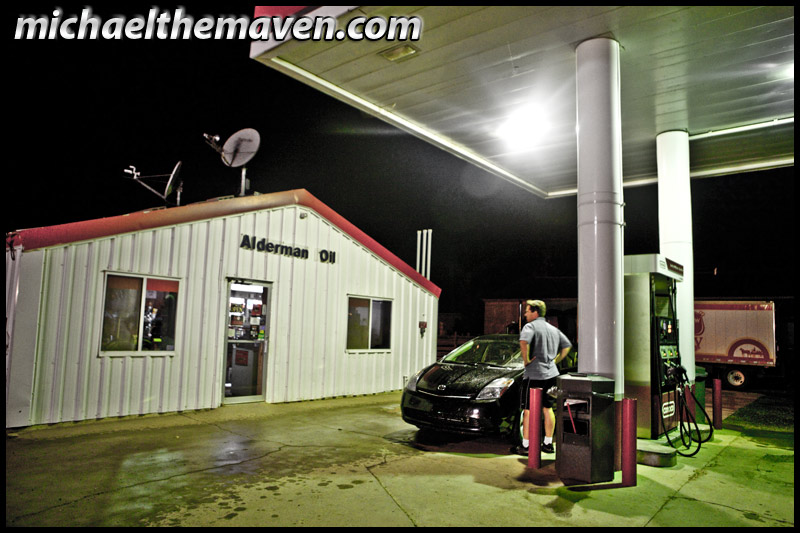 This is me last night, in the middle of Montana, thanking my lucky stars. I almost ran out of fuel in the middle of nowhere, at midnight, in the middle of a storm, with no cell phone service. My Prius has a range of about 450-500 miles depending on the octane rating of gas Im using, how fast I am driving, etc. To make things even more confusing, the tank isnt metal, its a flexible bladder type tank that holds between 10 and 12 gallons and it changes. I try to fill the tank up when I get down to my last 100-130 or so miles just to ensure I dont run out.

Well, apparently there is a road in Montana (and Im guessing a few other places) where there isnt a gas station for a good 140+ miles in between, which is what I think for the civilized world is crazy. After not seeing a station after 70 miles I was getting worried and I pulled up into the station with about 490 on the tank and 45 miles to the next city. My GPS wasnt recognizing what appeared to be a closed station either. Initially when I saw it, I noticed that all the lights were turned off. There were a few other cars stopping, looking at it, and then driving off, so I assumed it was closed. I was bummed, but I had to try the pump anyway because I was pretty much desperate. And it turns out it was on and working! :) Ran my card like I normally did, filled up and off I went.

I think there is a little lesson there: I almost talked myself out of not trying because there was this initial appearance of failure and hopelessness, but in reality, a closer inspection proved that I was fine. The problem was in my head! Not on the road, tank or car. Had I panicked without checking it out and tried to drive to the next city, I doubt I would have made it.