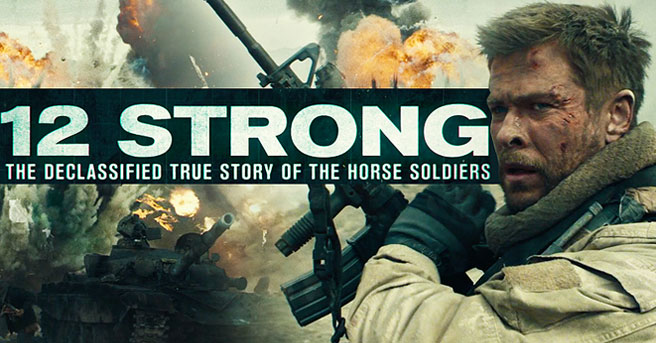 I have some mixed feelings about the film 12 Strong.

I LOVED the story, especially because it is true and we (the United States) did a lot of bad things to a lot of bad people (the Taliban & terrorists (not "insurgents")). I truly feel any religion that does the things they do to innocent men, women and especially, children have a special place in hell. Yes, you are reading this correctly, for all of the disaster aid work I am a part of, sometimes violence is still the answer. I got into an argument with a friend today over this, but Im pretty certain they didn't really have a comprehension of how bad these guys really are. I think the horseback riders were determined, innovative and did whatever it took to get the job done and I salute them! There should be more films like this, especially the true ones. So from a historical perspective, I appreciate they are getting the airtime they deserve.

As far as a film itself goes for entertainment....something was missing and I really can't put my finger on it. Something in the editing, something in the firefights. I felt the dynamic of the Captain (Hemmsworth) and the Northern Commander was realistic, because that feels the way things really are on disaster aid trips. You have a mission, and have to worry about something as trivial as navigating an individuals personality or hurting someone's feelings.

What I didn't like, were the gun battles felt a little too unrealistic. Unlimited ammo. Charging at hundreds of emery on horseback, it was too Rambish. I also wanted to know the characters more.

Other than that, its a YES!

If you do see it, follow it up with an interview from one of the REAL horseback soldiers as interviewed by my friend Thad Forester on Patriot to the Core: A GREAT Interview with one of the original 12 Strong Soldiers