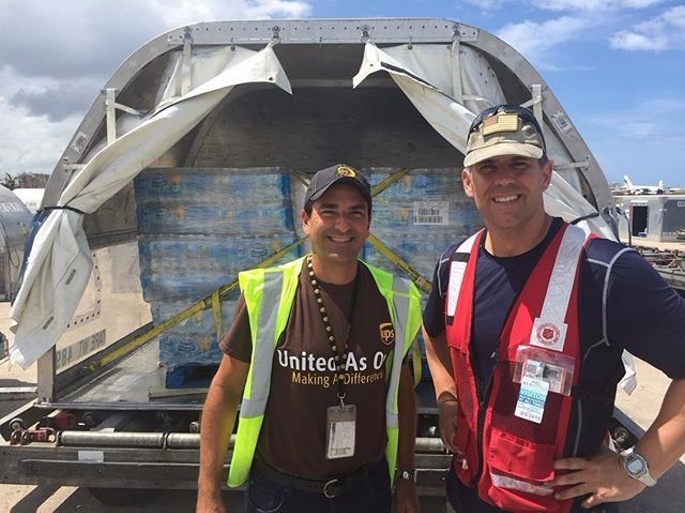 Hey, everybody. Michael here. It is October 11th, 2017, and I'm recording this from Caguas, Puerto Rico. I've been here for just over a week now and I've been working with the Salvation Army and I wanted to give you guys an update in terms of what I'm doing, what the real situation is on the grounds and the problems we're facing and as well as what you can do to help.

Puerto Rico, the problem with it ... Whatever you're hearing in the news, it's not one thing, it is a number of things. If you look at the system of society, including water and power and internet connection, cell service, fuel, distribution of food, all of those things, they come into play as a system. So when all of the systems in a complex organization start to lose efficiency, it has a multiplying factor on it, and I'll try to illustrate this right now.

If you're not able to call to a friend or a coworker and communicate an idea to them, when that is gone, it creates a logistical nightmare because in order to get certain types of information, you have to physically show up. Puerto Rico is unique because it is an island and it's geographically isolated, so there's not roads coming in. If you are going to come to Puerto Rico, you're coming by boat, or you're coming by air, and that creates a tremendous bottleneck for supplies first off. The second problem is that the damage to the infrastructure is wide spread, so if one town or two towns were hit on Puerto Rico, the rest of the island can obviously come in and support it, that's not what we're seeing here. We're seeing widespread destruction across the entire island. 88% power is still down, so the island is running off 12% of the power that it typically normally has, so without power we lose lots of different services, desalinization plants, water plants, things of that nature, and that creates some tremendous challenges. As I mentioned, the power grid is down. Without power, it's a real nightmare. In Saint Thomas we didn't have power for a while. Most everything that I see here is running on generators, but there is some city power coming back on.

But really the biggest problem in the beginning was the lack of fuel that has kind of been resolved and people are able to travel more, the gas lines are definitely shorter, in fact yesterday I filled up, I didn't wait at all, but I think the fuel was the first thing that needed to be resolved. The second thing now, the biggest thing, is communications. If AT&T and the other cell service providers could fix that, that would be a great benefit. Even our sat phones that we're using here, sometimes they don't get through because there's so many people using sat phones, but currently the communications is one of the biggest challenges, I think.

Despite what you guys are hearing in the news, I can tell you there are thousands of government and [inaudible 00:03:04] workers, nonprofit organizations, state departments working together. They are doing a phenomenal job, very impressive, but as a whole, I see Puerto Rico as a problem that's just not going to be solved at any point. You're just not going to say, "Okay, the problem in Puerto Rico is finished." That's not how it's going to work. What's happening is the situation is being improved upon from day-to-day, and that is what's getting the progress done, is just improving the position. I've been very impressed with everybody working ... I really don't think you can point the finger at anything and say, "this is what's wrong." It's logistics, communications, power, fuel, the isolation of the island, all those things compounded together.

When I got here to the Salvation Army, I just finished in Saint Thomas, and I came in to assess what was going on and make some recommendations. We have a new team that's come in, I've been assigned as the operation chief for the Puerto Rican emergency disaster response, I've already, let's see, 10 days, and what I've been assigned to do is to help build the logistical pipeline for moving product as we receive it from government agencies or we purchased it, we store it in a warehouse and we're trying to get those resources out to the cores, the Salvation Army cores, who are doing feeding programs and other kinds of outreach. So we're trying to build the system and a pipeline to continue to feed people. The Salvation Army, they're doing a great job, the local leadership is doing an amazing job, but our goal is to get to the point where we're feeding a hundred thousand people per day either through hot meals or through delivered meals, and it is a tremendous challenge. I feel like I thrive in these situations, very complex, lots of networking and teamwork are from different agencies coming together, and I'm very proud of what has happened so far. We're really starting to get momentum now.

I am a little tired, but I'm also really excited for everything that's going on. I don't know how long I'm going to be here, I don't have internet connection right now so I'm going to have to save this file to a point where I can actually get the video or the audio file out to my assistant and he'll post it as a podcast. I'm sorry, you guys, that I've been out of touch, but I've literally been just totally absorbed in everything that's going on for the disaster response. People are hungry and they're thirsty, and this is where my focus is.

So a few things I need share with you guys, it's really kind of interesting, we've had a lot of support come in from other people, there's a company called Flow Track that's going to offer us free software to manage the warehouses. I've never managed a warehouse before, I've never driven a forklift or needed to do tracking of inventory, and this company came in and said, "We're going to help you." UPS has been amazing, they were very helpful in Saint Thomas, and we're probably going to try to partner up with them in some very out-of-the-box solutions. I think everything's on the table, if you have a solution, I don't care what it is as long as it works and this is going to benefit a lot of people. I can tell you more about it once it's finally approved.

But something that I wanted to let you guys know about is that a photographer on YouTube, Chelsea Northrup, maybe guys know Tony and Chelsea Northrop, if you watch YouTube, if you're a photographer, she has relatives here and we started communicating. I asked her if she wanted me to check in on them, and one thing led to another and she took it upon herself to launch a fundraiser for water filters specifically. So the problem is water his being delivered by truck, literally bottled water, and has been taken around and those resources are depleted ... It's kind of hard to get water here because it's heavy, and you have to put it on a ship or a plane, and so the government and FEMA is looking to alternate solutions. One thing that I've seen in the past is water filters, water filters has been super beneficial, and so Chelsea, credit to her, she's taking initiative, she wants to raise money to purchase water filters from a company called Water One.

Now, part of the problem is, before we can do water filter distribution, we have to get them approved by the Department of Health, and we've navigated those channels. The Department of Health has approved the water filters, and so the game plan is to raise as much money as we can for these water filters, we're buying them at 50% off, every one water filter ... I think we're paying 50 bucks for them, that is going to supply 600 gallons of fresh water per unit. So there are fresh water sources here, we're going to take these to the people who need them the most, the ones in the mountain, I've seen them drinking out of the rivers, we're going to distribute them to the people that we find that need them the most. But the plan is to have this fundraiser, purchase the filters, get the filters shipped over by our partner, UPS, and I will personally pick the filters up at the airport and the Salvation Army will distribute them as part of the food distribution program that is already ongoing, and we're going to focus on those who need it. It's essentially like buying 600 gallons of water for 50 bucks for somebody. They have replaceable cartridges and things of that nature, but right now there is an impending crisis because some of the water sources have become contaminated.

There's a dam, I think that was breaking in and they were worried about a community, about a quarter of a million people, who ... They're looking at larger solutions. FEMA wants to bring in cisterns and water bladders and things of that nature, but what we're going to do is try to focus on the smaller communities 30, 20, 70 families and focus on them. I know that the Salvation Army has already ordered some of the filters and we will get them out as soon as we can, but I would definitely please ask that if you're interested in supporting ... What I'm doing here personally is to make a donation to Chelsea's fundraiser, all the money is going to purchased through Red Lighting, which is my charity aid organization that's set up specifically for this, and then I'll personally get the filters. So all the money is going to the filters. There's no overhead, except for maybe, I think, some transaction fees or something like that.

That's what's going on with me. Personally, I'm doing great. Physically, I'm doing okay. I'm a little tired mentally, but I take naps, 20 minute naps, once or twice a day and it's been getting me through. I've been in the field now for almost a full month so I think I have about 10 to 14 days left and I'm going to be completely spent, but just wanted to let you guys know that I appreciate you all so much for your support and listening to the podcast. I know I've neglected you guys, but that is from Puerto Rico. It has been a tremendous opportunity to learn and to serve. I wish you guys were here with me so I can show you some of the cool things that we're doing. I'll try to record some of it, but there's no way I'm going to get a video file out of here just for bandwidth. I'll be lucky to get this file out. But in any event, thank you guys so much. We're going to put the links in the description if you want to support the fundraiser. Thank you so much and I will see you next time. I'll try to do another update shortly.