What I Learned From a 3 Day Fast

As I write this I am concluding a 3-Day fast and wanted to make some notes. I thought the experience was very insightful and wanted to share with you how I did it, how i felt and what I learned. Part of me feels a desire to push further into the 4 or 5 day range, but I always make a deal with myself to avoid going past certain kinds of goals once they are attained (like giving myself more work for finishing a tough job early for example).

First off, I should mention that I typically do a complete fast on most Saturdays, unless I am traveling, working or there are special occasions. This is something I have been doing for many, many years, so I would imagine that I am a little conditioned to fasting in general, so it may have been a little easier for me.

Secondly, I went without both food and water on the first day, which is typical, but on the second and third days I drank plenty of water, and included some electrolytes like plain old salt in my water, potassium (just one dose) and magnesium. Our bodies obviously need water and electrolytes to maintain homeostasis, which includes a balance of intercellular fluids and ions. Probably best to consult with a doctor before doing any kind of fast if you haven't before, or for longer periods, there are reports of people really jacking themselves up (even death) with only drinking water only during a fast. Just be careful people!

Thirdly, Why in the world am I doing this ? There are several reasons, but suffice it to say, it was an experiment. Ive never gone without food this long and I wanted to see how I would feel. Part of my motivation was from a study released in 2014 that supports the idea that our immune system resets itself after 3 days of fasting. Very intriguing. Some of the theories include a purging of old white blood cells, being replaced with new ones. There are other studies and theories that suggest several other medical benefits as well, including weight loss, protection against multiple sclerosis and even anti-aging.

Day One was pretty easy, I basically had a normal dinner Saturday night, went to bed and had a normal Sunday- 4 hours of which I spent reading under a tree. I did feel some intense hunger pangs in the evening, but that subsided once I started drinking fluids again.

Day Two I started feeling really, really good. Its hard to explain, because physically you are tired, and there were two dizzy spells but other than that, I felt GREAT. Clear minded, extremely productive, busy and fell asleep easily.

Day Three (today) was even easier. Very mild hunger. Drink plenty of fluids, stayed busy with work and it wasn't so hard. As I mentioned I am very tempted to push further just to see what else happens, but because that wasn't part of the plan, I will end it tonight.

The most important thing I learned from this experience: When our minds are hungry, our stomachs go to sleep. It basically means when we are curious, eager to learn something new, watching a good movie, engaged in a good cause or conversation, doing something constructive or fun, it becomes easy to forget we may be hungry. I realized that if I just focused on doing things that I liked and enjoyed, I wouldn't think about being hungry, and that was exactly what happened. I think there is some gold in there.

Think about that. Our physical desires to eat fade the more intellectually, mentally or emotionally engaged we are in an activity. When we have lulls in time, and we haven't eaten, we notice our hunger more. From this I am concluding that much of how & when I eat, may be triggered by boredom more so than hunger, and one may be able to lose weight, simply by spending more time doing the things he or she loves!

The second thing that really hit home was the clarity of mind was really pronounced. I wish there was a way to stay in that mode of clarity indefinitely, but I think if I have something big going down and need to have a clear mind, this is where I would want to be.

My third observation was how productive I became. If I am not going to eat, there is not need to prepare food, clean up, etc, and it removed those transitional spaces as well. Felt like I had 2-3 extra hours because of this. No post lunch grogginess either.

Take a look at the color of a Keto Strip after 3 days (I don't use these anymore, but thought I would take a look just out of curiosity) Never had it this color before! 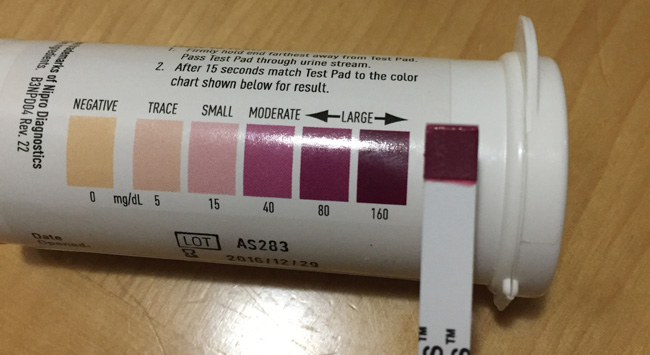 In any event, yes a three day fast was a very positive experience for me and I will be doing it again!

Have you fasted before? What was your experience and what did you learn?