Nocturnal Animals | A review and Interpretation 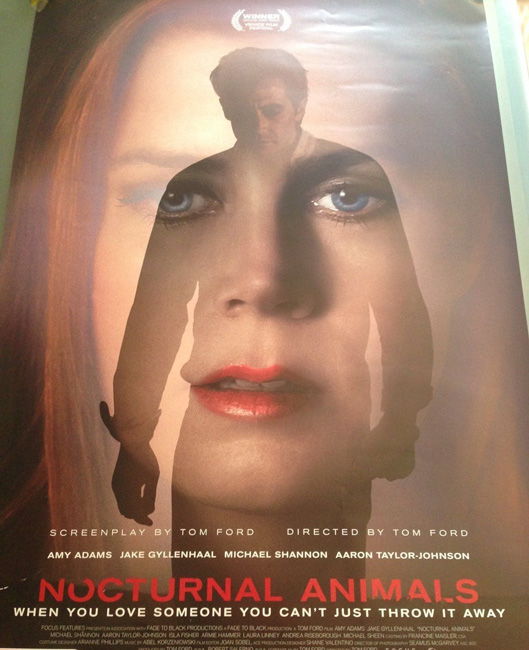 First off, let me say that Nocturnal Animals is fantastic. Seriously. It was amazing. This is what great filmmaking is all about. Beautiful imagery. Deep characters, great writing, the ugliest of human traits on full display and many layers of symbolism. Riveting. At first I thought âthis is a good movie to watch onceâ but by the end it was âthis needs to be re-watched many times to appreciate fully.â It is not for kids or teenagers, or non-R-rated movie go-ers obviously, but everyone else who loves great cinema should see this immediately. It should be a nominee for Best Picture of the Year. If I take the time to sit down and really think about a film, and then write something like this, you know Ive enjoyed it.

SPOILERS â You are welcome to ask questions in the comments below and I will try to answer them.

Do not read below this line if you havenât yet seen the movie because these comments will ruin it!

Why the dancing naked obese women in the opening? I believe the dancing women symbolize the misperception of what is (incorrectly) glamorized & worshipped by society. Specifically traits such as power, greed, worship of sex, disloyalty, infidelity, hate, violence, unforgiveness, a love of fame / glory / money, anything that glitters, etc. The film is a journey into the dark aspects that humans are capable of and the opening is Fords way of mocking societies tendency to worship these characteristics. It is a loose play on the Emperors New clothes, we as a society are worshipping the wrong things.

Why did Ed send Susan the book & What does it mean? The book is dedicated to Susan, and it is, in itâs entirely, symbolic of what Susan did to Ed. Everything. The daughter symbolizes their real life, unborn daughter. Tonyâs wife in the book, symbolizes Susan before she decides to leave Ed. The 3 men in the car (Ray, Lou, Turk) the ugly villains of Susanâs personality. Ed has written the book about Susan, what she is and how she hurt him. Susan also at one point even told Ed to give up writing as he was no longer good at it, but now has written something amazing, and it is so because it exposes her for what she is. Some say success is the best revenge, even more so in this case.

Ray- The kingpin, represents her enormous ego, he even specifically says he will not tolerate being disrespected, and if someone accuses him of something he has to bring it to reality. Ray is the side of Susanâs personality that convinced her that she is better and stronger than Ed, and therefore taking advantage of him was justified. Ray refuses to take responsibility for the accident, blaming Tony, even though he was the one instigating everything. (From their daughter no less flipping Ray off. Interesting symbolism, no?)

Lou- The scumbag who left him in the desert, I believe represents her disloyalty. I thought it was very interesting, how Lou and Ray later returned to the place where Lou left him, saying that âYour wife wants to see youâ. This is symbolic of Susanâs feeble attempts to communicate with her estranged husband in his greatest moments of abandonment and suffering, when in fact it was just her ego preying on his weakness.

Turk- He is the scumbag killed during the robbery, and I believe he represents greed. Remember Susanâs mother told her Ed wouldnât be able to provide financially for her, and this is also a theme with her now current husband, who is struggling with is business. Susan basically mocks him for his inability to be as successful as she.

Ray, Lou and Turk (ego, greed and disloyalty) are what raped and killed the daughter and mother in the book. Ed has woven these aspects of his life into the story in such a way to illustrate what Susan has done to Ed in real life.

Susan is also eventually convinced by her mother that Ed is ânot an equalâ (ego), could not provide for them financially (greed), and later abandon Ed (disloyalty).

Tony is very carefully portrayed as someone in the book who is weak and unable to defend or provide for his family, and this is why he is taken advantage of by the 3 villains. By the end of the book, he is finally strong enough to exact his revenge, even if it kills him.

What does Michael Shannonâs character represent? Justice. Unsophisticated and at all costs if necessary. It is interesting how he was questioning Tony in the beginning, as if there was any doubt as to who committed these crimes. As if Ed was asking himself these same questions as to why Susan cheated on him, left and had an abortion.

The Ending- In the final scene, we are left with Susan waiting for Ed, and while some movie goers wonder if he ever shows up, the answer is undoubtedly no. The whole purpose of the book was to get Susan into an emotional & vulnerable place, looking to re-kindle the pure, kind and sweet romance she has since learned to miss in the face of a shallow, unsuccessful, disloyal husband, and in that place of vulnerability, Ed demonstrates that he is now strong enough to carry out his revenge by leaving her there. She is now the one discarded & worthless.