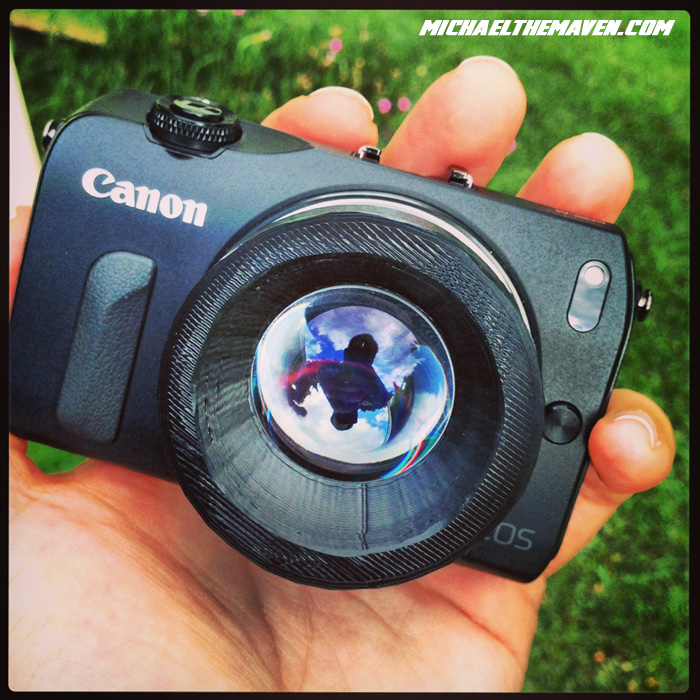 Ive been meaning to post this for a while. Here are the results of my first 3D Printed Lens Mount. It is important to differentiate between "Lens Mount" and "Lens Element" (aka the actual glass). FIrst let me say this has been a tremendous learning experience on many levels.

As a photographer I have always wondered why in the world has no one made certain kinds of lenses, say a 30-50mm f0.7 that would just be absolutely amazing in low light? They exist and have been made before, like this one: Zeiss 50mm f0.7

Glass lenses themselves are pretty easy to find, either in old lens mounts for example, you know the ones people sell on ebay as "spare parts" or from lens supply manufacturers. In my naivety, I figured I could get the freaking biggest lens I could find with a relatively short focal length, mount it on a camera body and use it as a supremely awesome, one of a kind low light lens. Never underestimate the power of naivety! Its amazing what you can accomplish when you are too stupid to realize you might not have all the skills needed to do something

The First thing I did was have to come up with a design I could make on my 3D printer, which I think I was successful in. My design was a camera mount, with a threaded top. The second part was essentially a cup that would hold the lens element and the focal length could be adjusted by rotating the cup which was also threaded to match the threads on the mount. Essentially a 2 part hollow nut and bolt.

I spend a saturday afternoon working on the threading and mount. Something I have learned about making complex things on a 3D printer is to print as little as possible until you get the fittings right, as I did in this example, where the male and female threading fit nicely. Its kinda crazy to believe a 3D printer can actually make something like this, but it all worked out.

Here is the test threading: 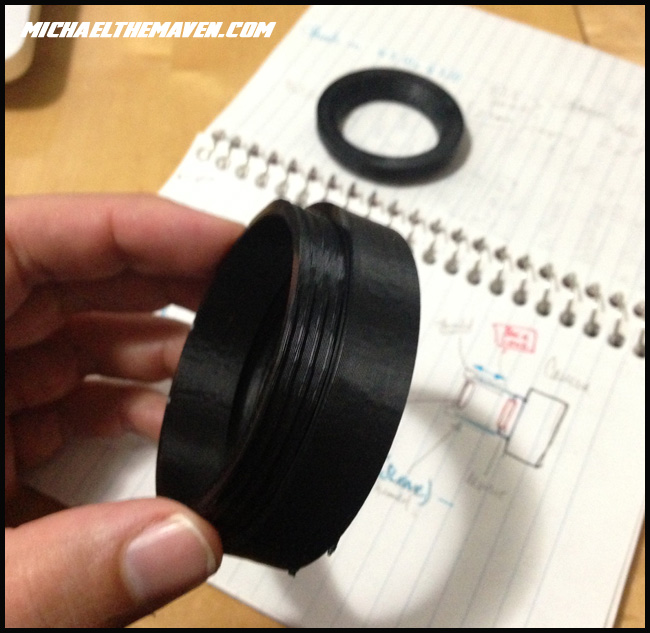 Part of the problem I had was the lens elements was in possession of had very short focal lengths, like 25mm or 30mm. The mount for a Canon DSLR is about 45mm, which meant that I would have to find a way to overcome the fact that I had a flipping mirror inside the body which the lens would hit. Instead of messing with all that, I decided to redesign the mount to fit a Canon EOS-M Mirrorless Camera
(which is actually a better camera for this kind of job, because it lacks a mirror and therefore can move the lens element itself much closer to the sensor. BHPhoto is having a steal of a deal on these little guys right now, $299. Ill be honest, I was about to get rid of mine, but after they came out with the update for the focusing and it's awesomeness for 3D printed lenses, Im hanging onto it! I even have a tutorial training video for it: Canon M Crash Course by Michael The Maven

As an interesting side note: The Canon M mount is practically identical to the full size DSLR mount, it is just smaller My threadings also were scalable for the M, so I just downsized everything to fit. The front part of the lens is custom designed to fit the glass itself, so it can be popped in or out without any need to glue, etc. Something I cannot stress is the importance of being able to Measure the Focal Length of a Lens before you start making your housing.

Here is the Canon M Mount with the Threading: 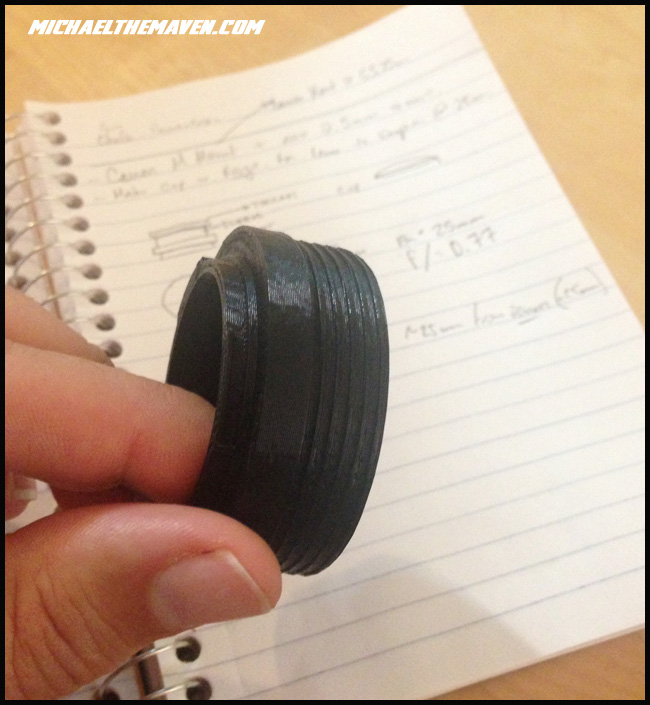 And the final result (same as the first image in this post): 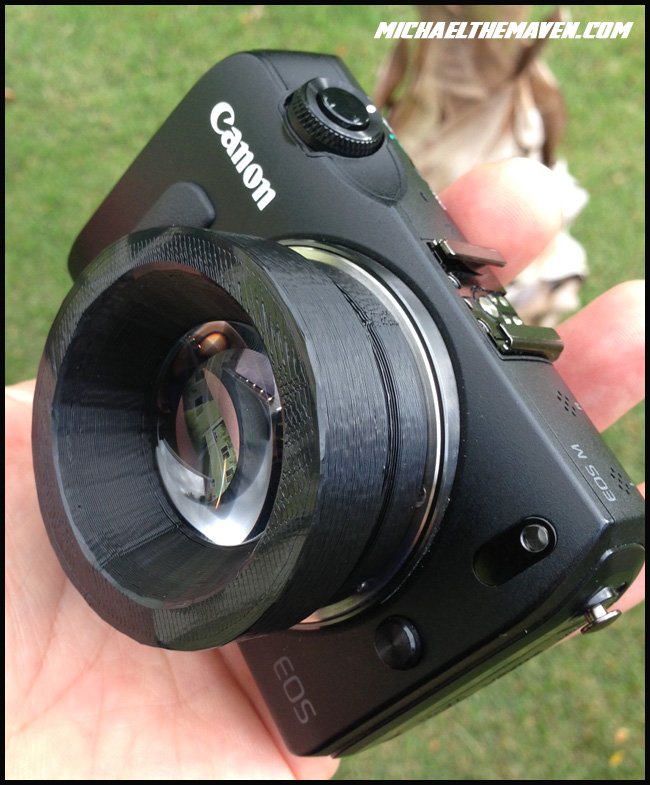 While I estimated the focal length of this lens to be about 25mm, it really turned out to be closer to 30mm. With an opening of 32mm, that put me right in the ball park of an f1.0 lens, which is accurate. The problem? Focusing. While the lens itself has a monstrous opening, which would be awesome for low light photography, the aberrations are so terrible that it cannot really be used.

Here are some sample images from my first, custom 3D printed lens, Ill try to explain each here:

First test shot from my desk once it was constructed: 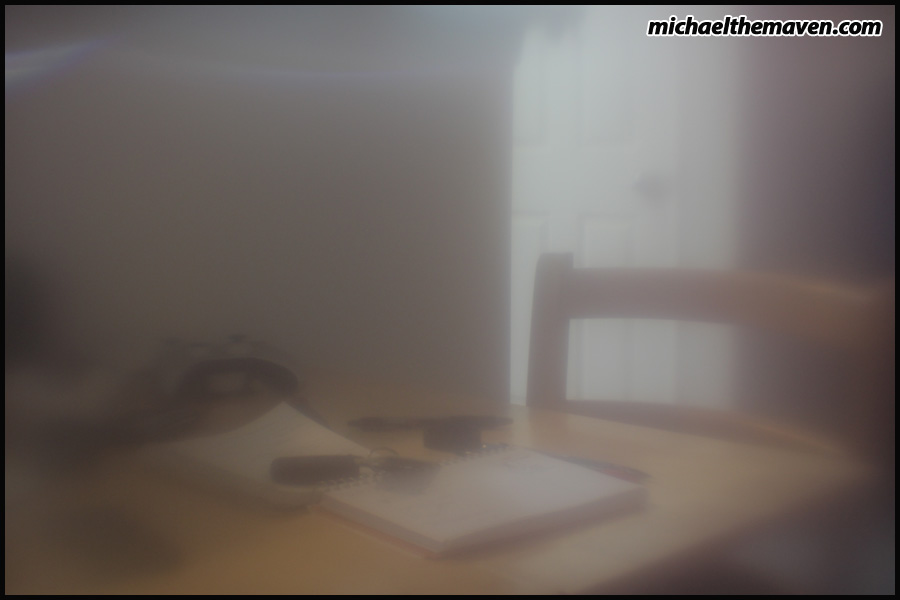 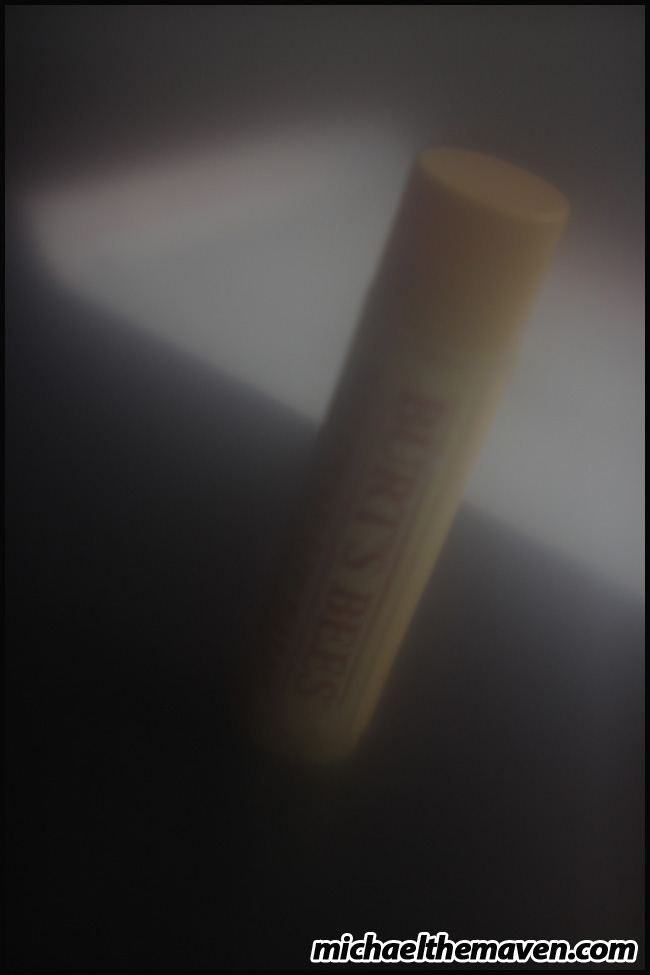 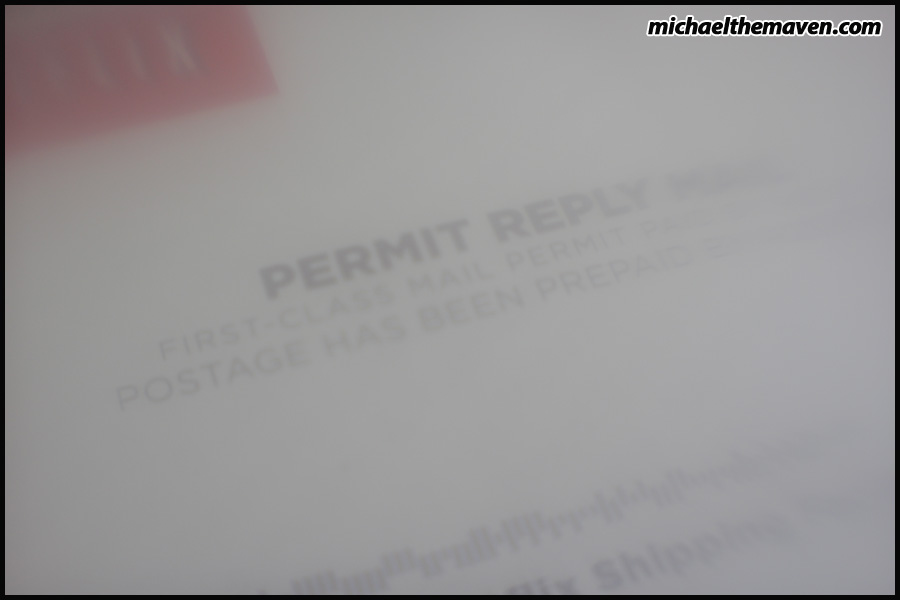 This is the grass obviously, note the spherical pattern of distortion: 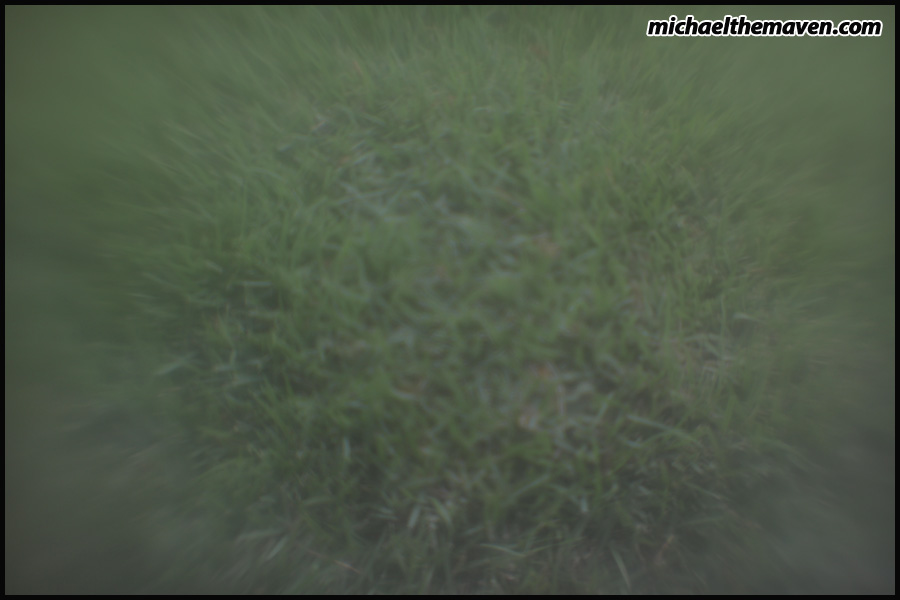 This is a plant by my car port, note the fuzziness: 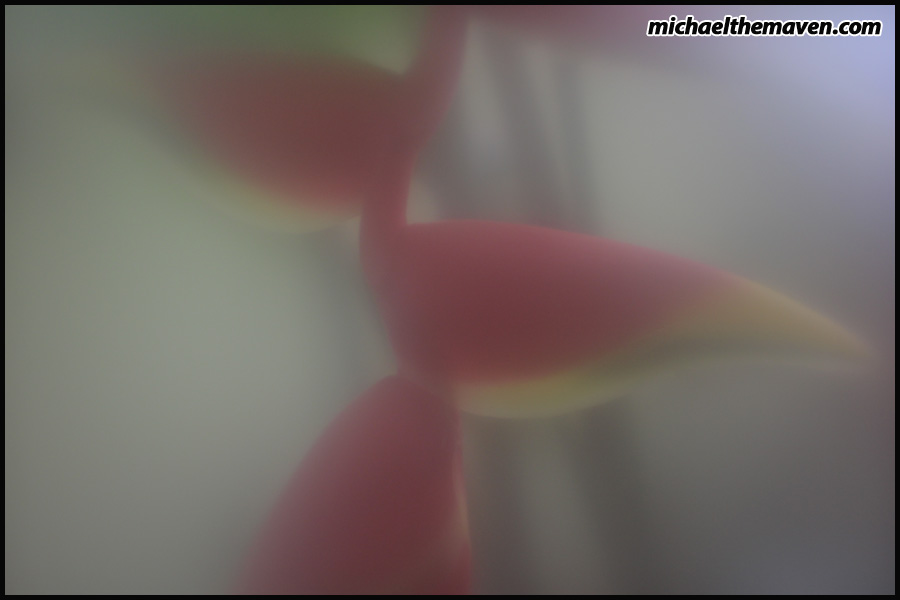 I start doing research and it turns out that this is very common and the way to "fix it" is to use a much smaller aperture, which I do by using tin foil and a holder between the 2 other lens parts. This is about an f stop of 3, notice how it already looks better? The problem with this is, yes, you can correct it to a degree by stopping it down, but that defeats the whole objective to make a crazy wide aperture lens that works for less than $10. 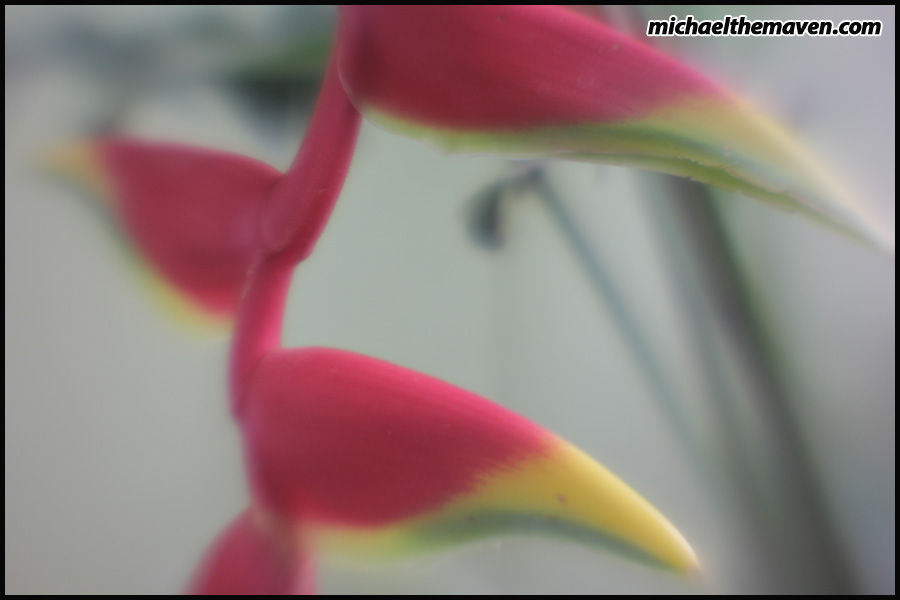 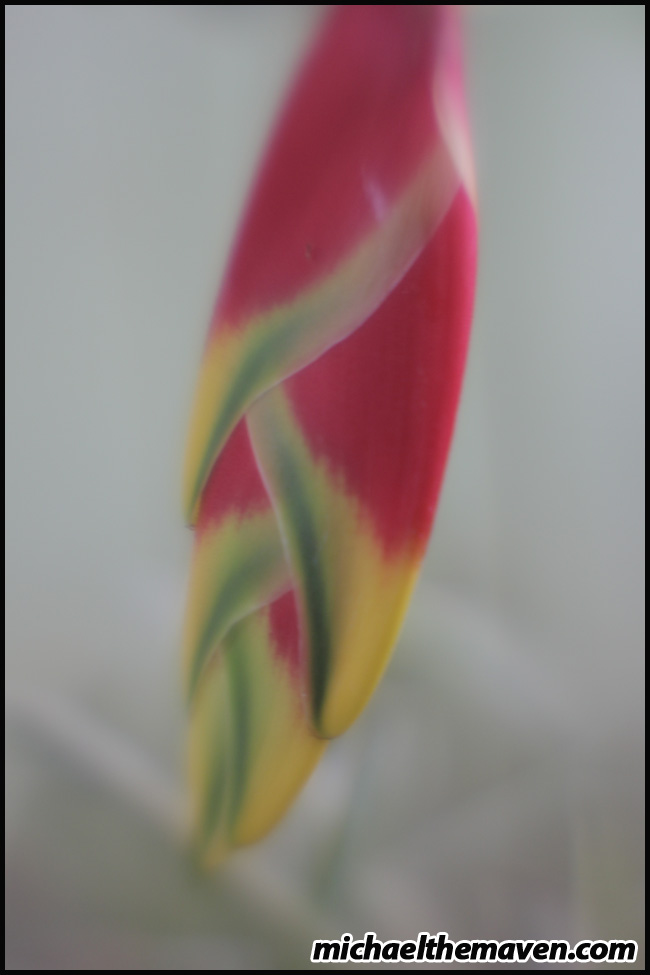 This is with a pinhole opening, 30 second exposure: 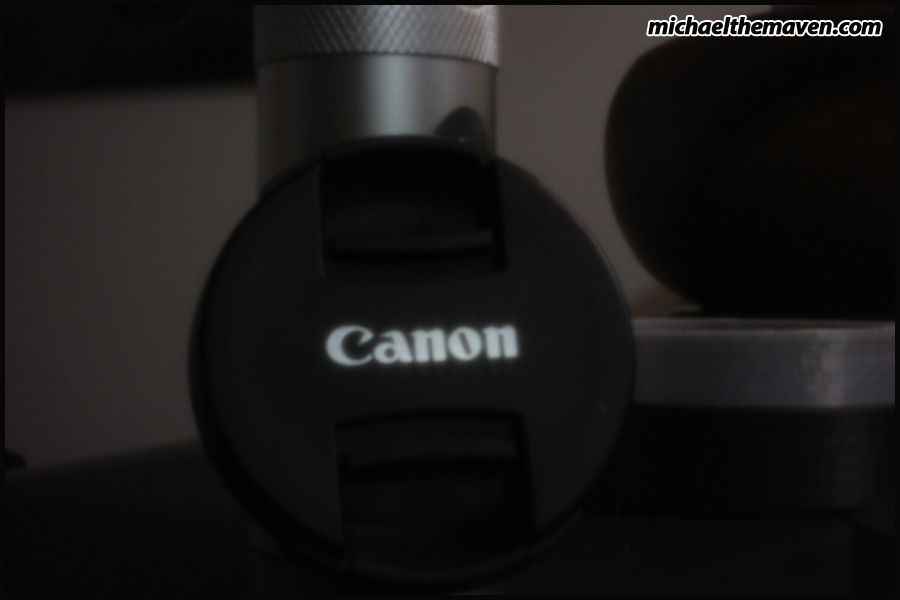 One of the main factors I was having a problem with was the shape of the lens itself, a Double Convex. I ordered a different lens, referred to as a "Positive Meniscus" and immediate saw better results in the distortion, this is it wide open, it works out to be a 15mm f0.6: 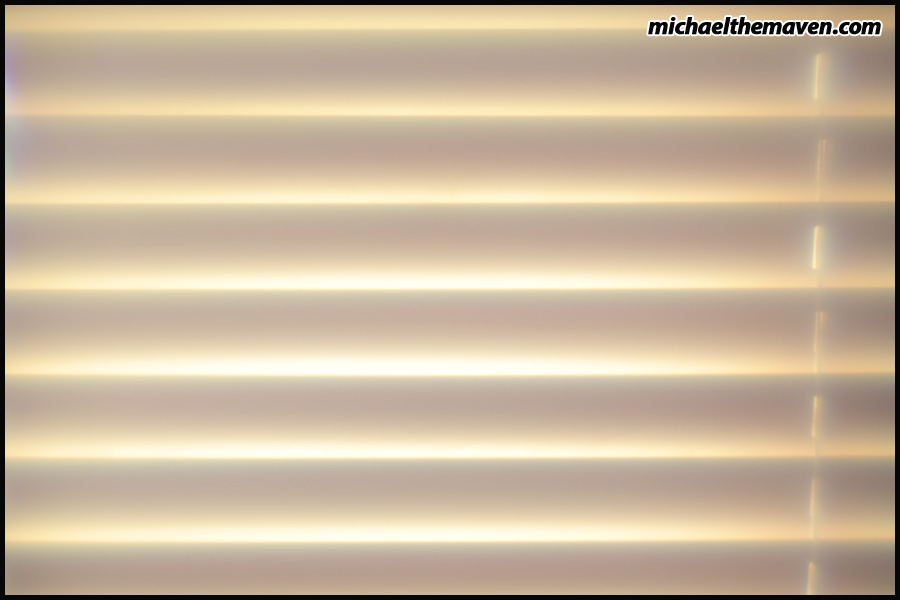 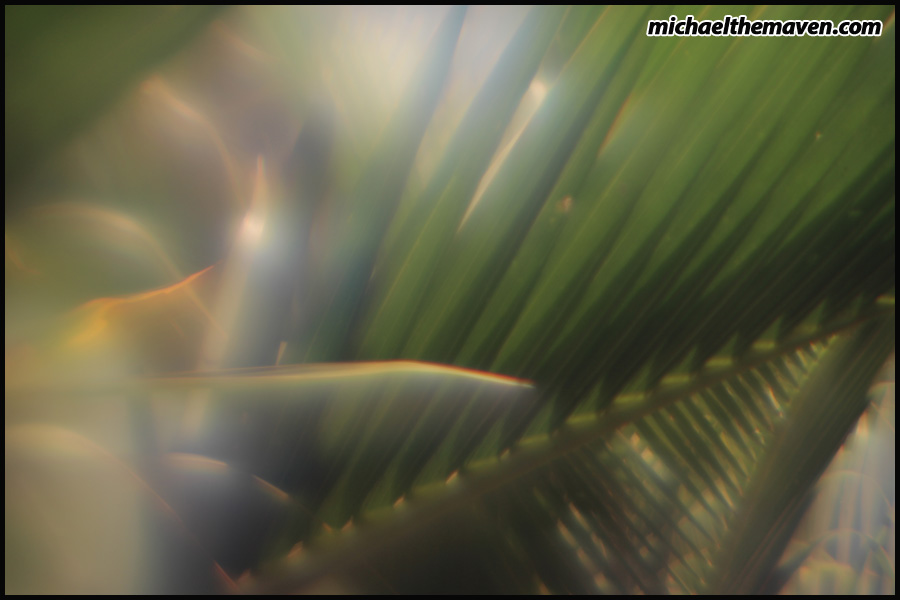 I start digging around more, and learn that in order to get very sharp focus without aberrations, a lens will consist of other lens elements specifically designed in relation to one another. When you actually get into what they call the "optical formula" it gets extremely complicated, on an intense trigonometry level that pretty much has to be done by scientists. The thing is, I know people are making their own lenses and having some success, but in almost all case, it comes down to using very small apertures to overcome the focusing aberrations.

Need to play around with this second lens more, it's giving me some better results. I also need to start looking at other lenses and what I can do to fix some of these sharpness issues and already have some ideas on how to make the sharpness better without stopping it down.

My curiosity led me to find a few good books on basic lens construction, but I will say this, there is not much information out there about it, like this is a secret lens companies want to remain secret. Ive found that there are different types of lens constructions and mounts that can help get better results and I hope I can have time to test it out.

All in all, while I wasn't able to get the results I wanted, I feel like I gained a tremendous amount from this experiment. As far as building the mounts themselves, I am feeling very confident. I think my next test will be to take an old canon FD lens, and rebuild the housing for an EF camera. In my estimation, completely doable. Remaking the lens holder takes about a half hour once I have the fitting down right.

Im also thinking about some specialty lenses that would require a very small aperture, those should be doable and easy.

As for the wide aperture lenses themselves, this failure has spurred an intense appreciation for what we do have now, as well as an interest about their construction, optical formulas etc. Ill continue to dig around until I find something that will give me the information I need to pull this off. I would love to be able to make a manual focusing 50 f1.4 for less than $7-8.

More to come on this!