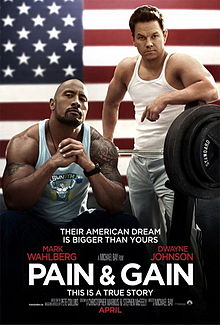 While it appears that Pain and Gain will be the number one movie this weekend, I would strongly recommend you not watch this movie, ever. Michael Bay's film attempts to be this clever dark comedy & the truth of the matter is the story behind it is very real, and the murders perpetrated by Donnie W & the Rock's characters were also very real. I will spare you the details, but suffice it to say it was absolutely brutal and the epitome of senseless greed.

Whenever there is a terrible crime, I cannot help but to wonder how the press provides millions of dollars of free advertising and marketing for what will eventually become a number one hit when retold by Hollywood. This causes conflict for me, because I believe in freedom of speech, but what I am not in favor of is how the media will make someone "infamous" and names/faces of criminal's become so ubiquitous that someone will always try to make some money on it. I am absolutely against criminals profiting from their crimes directly, whether it is financial or in recognition.

There is also a very fine line between historical movie/documentary/re-enactment, but I definitely feel trying to make a dark comedy about real criminals who had real victims is absolutely in bad taste.

Boycott Pain & Gain. If we do not support these types of movies with our money, Hollywood will stop making them.