Literally an hour or two after shooting the nuns in the park (doesn't that just sound funny?), Jack had arranged for us to essentially act as second shooters at an authentic Myanmar Wedding, with the main rule being that we had to stay out of the way of the "main photographers". This was very intriguing to me for a number of reasons, and while I was very excited for this, there were many things that were a little different:

1. The entire wedding, including the pre-shoot would last no more than 2 hours.
2. The pre-shoot lasted about 30 minutes, and the "main photographers" were a bunch of mid-20 year old youngsters who I was absolutely certain were not experienced (thats a nice way of putting it). In fact, it seemed the videographers were the ones directing the show, and the single photographer they had on the crew was appeared to be shooting with a kit lens.
3. Aside from cutting the cake and having a bite of it, the couple didn't eat. Everyone else did.
4. One thing that was very similar to American Weddings was that the couple visited each table to greet their guests while they ate.
5. There was music and singing, no dancing.
6. The couple had their degrees posted on tapestry above them.
7. After eating, most of the guests immediately left, likeâ¦long before the reception was officially over. Once the guests started streaming out, the couple went to the door to say good bye and thank them for coming. The couple was very, very gracious to all of their guests.

(Side Note 1: Despite Jack strongly suggesting to the bride and groom they might want to give the tall white dude with the 2 professional cameras and complete arsenal of L lenses 5-10 minutes of their busy time, I didn't get any love and all of my shots came from standing in a very restricted location shooting over the shoulder of the said 20 something photographer with kit lens. It was amazingly frustrating beyond all belief to have such an exotic looking couple, great window light and not be able to move them around a little. They were however, very kind to allow us to even be there.).

This is what a Myanmar Wedding looks like, and I will also add that this couple was probably, very, VERY well to do to be able to afford this.

When they first arrived, I was licking my chops at the great window light coming in. I love to blow out the backgrounds in situations like this to give it a high key, positive, upbeat type feel. 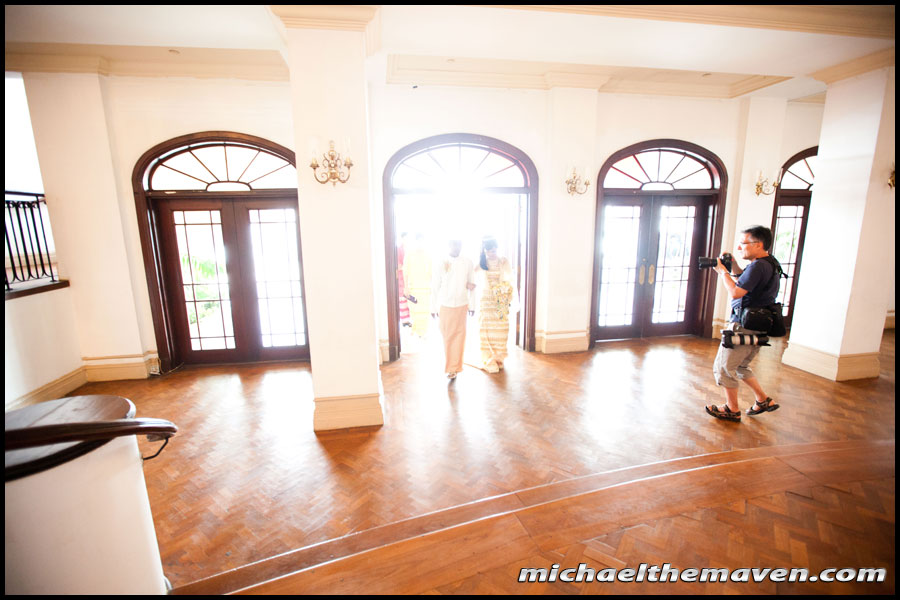 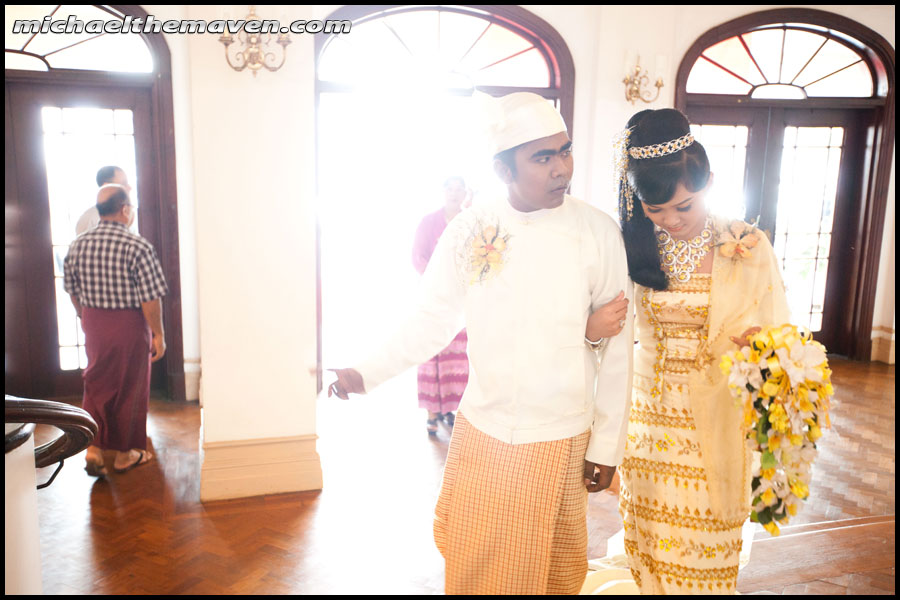 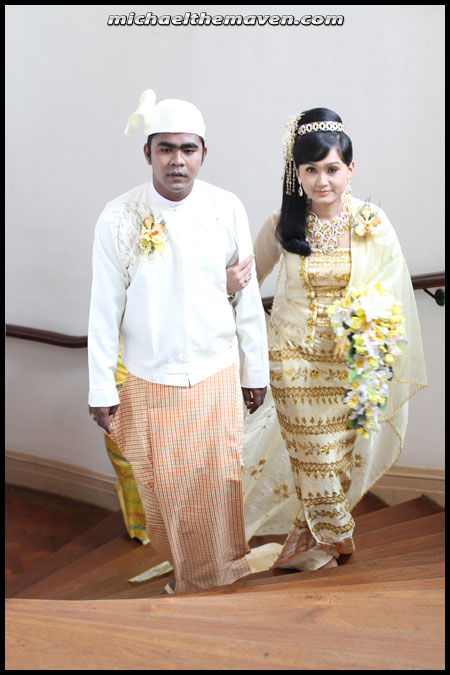 This is the other crew. Despite shooting in a very well lit room, even with electric lights, they decided to shoot with the windows at their backs: 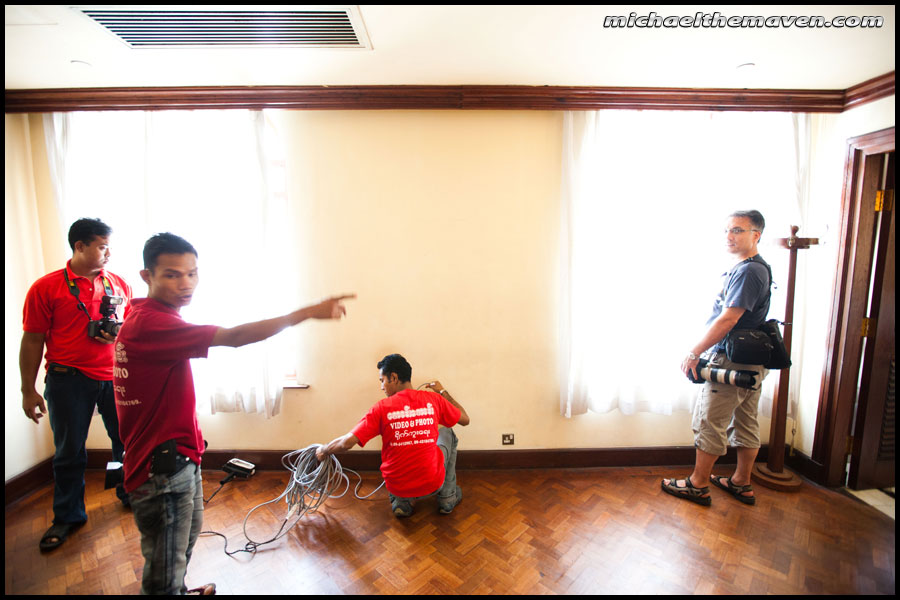 Like this, pretty much for the whole time. I think there were like 3-4 total poses over 30 minutes, with this one taking about 15. I didn't entirely understand what they were doing, but the videographer was doing many pans and zooms. 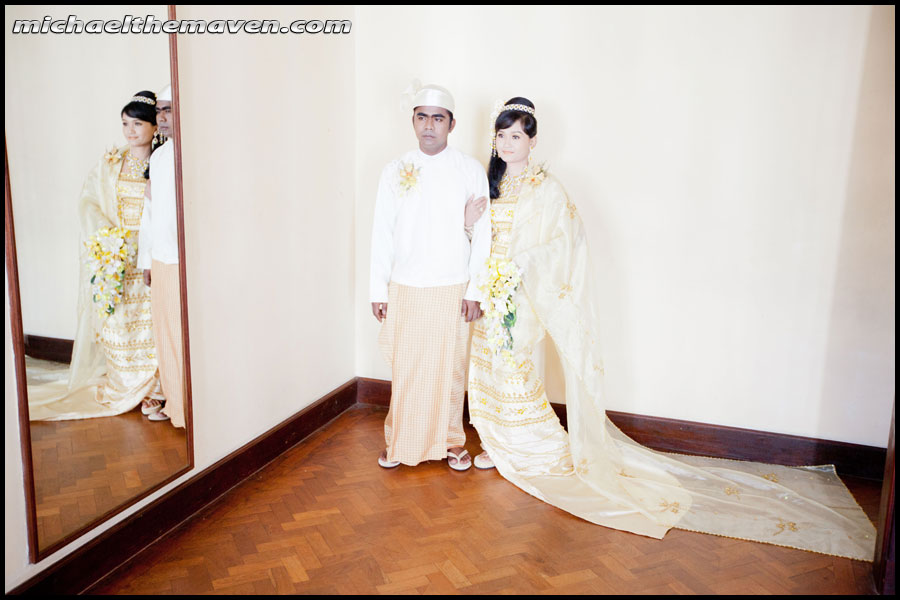 Was still able to get some half decent detail shots of the brides jewelry and makeup however. Note the flowers on all of her fingernails and toenails. 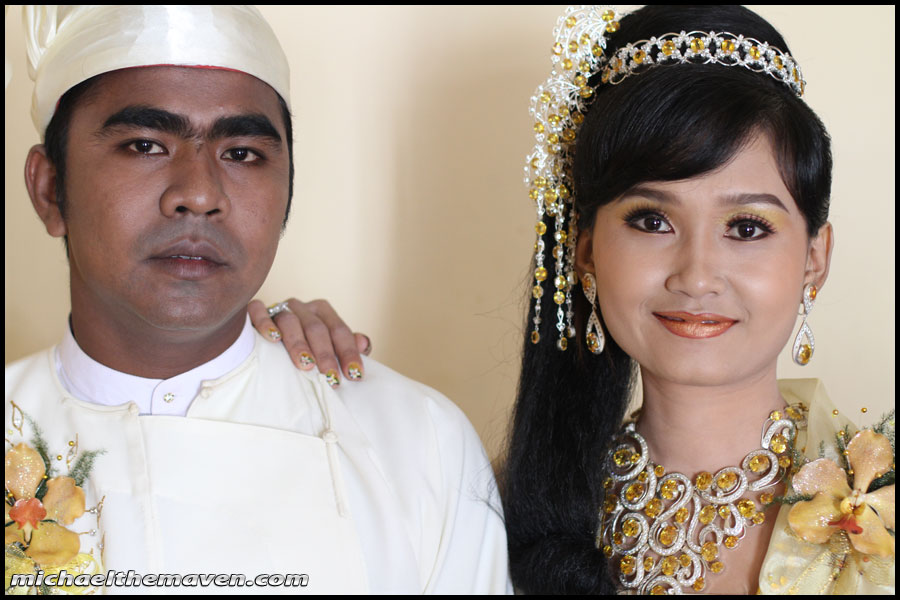 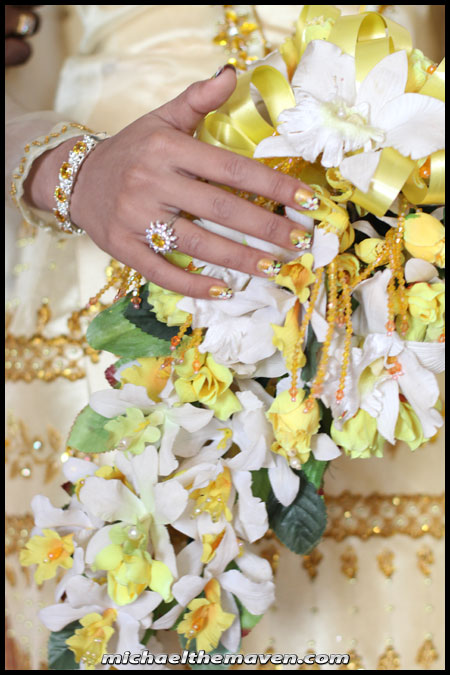 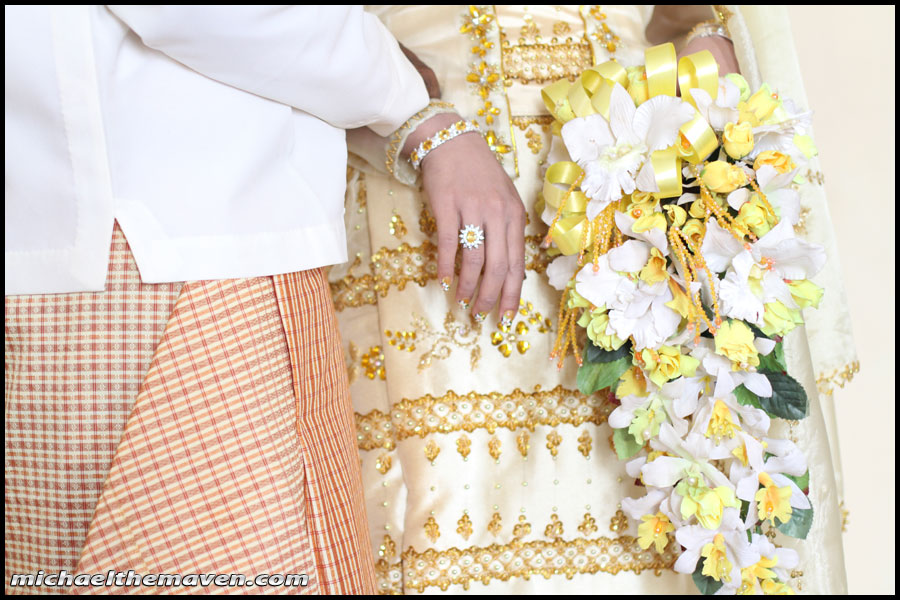 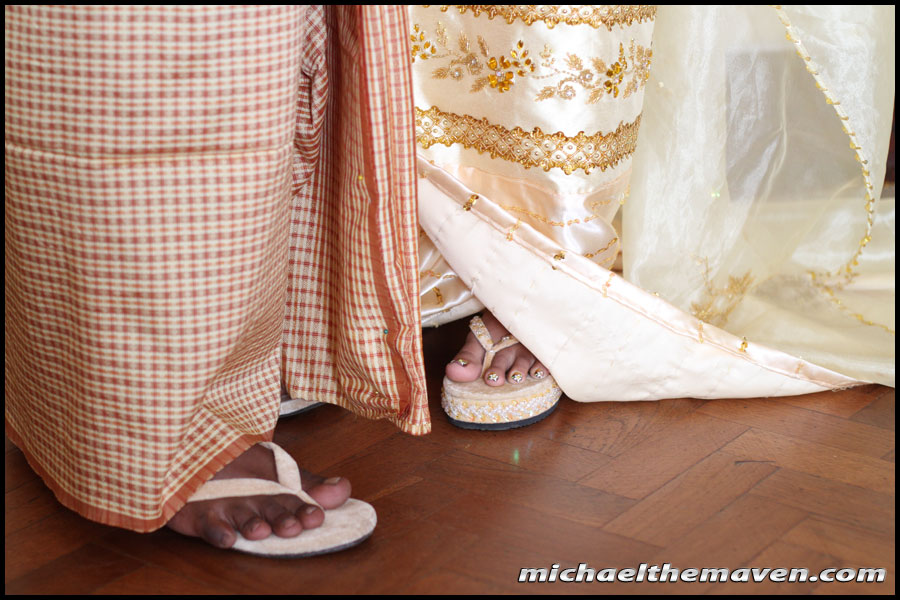 Bridesmaids. I tried to converse with them, but the whole language barrier kinda got in the way. 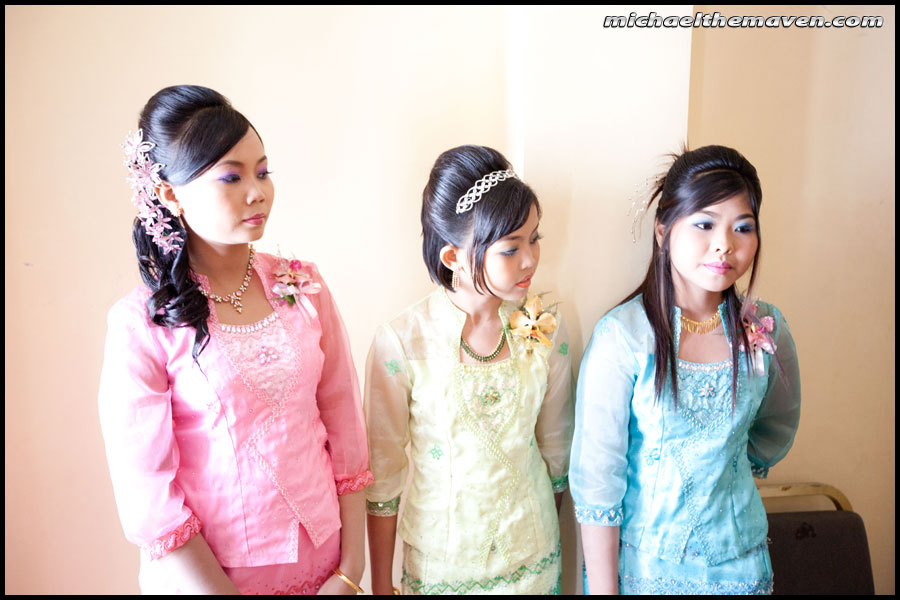 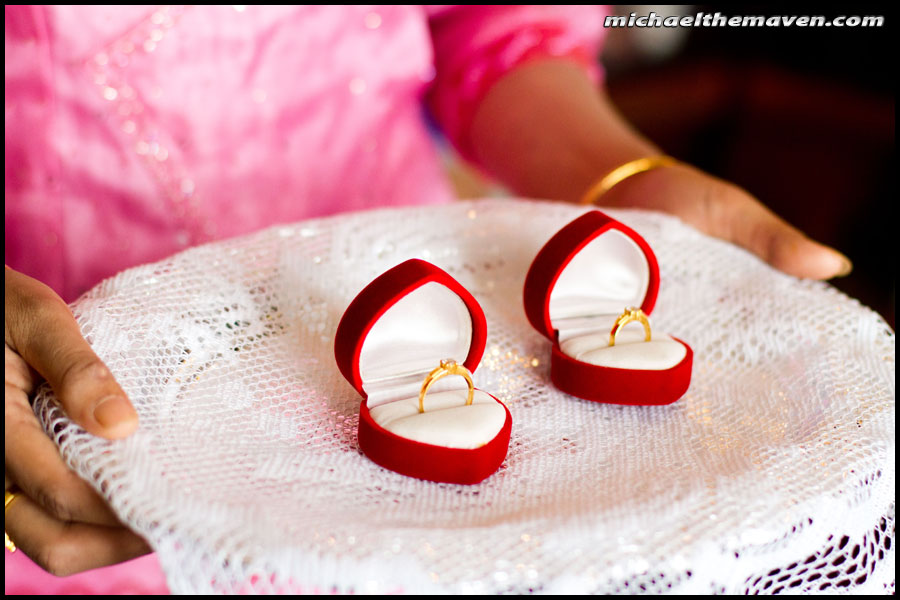 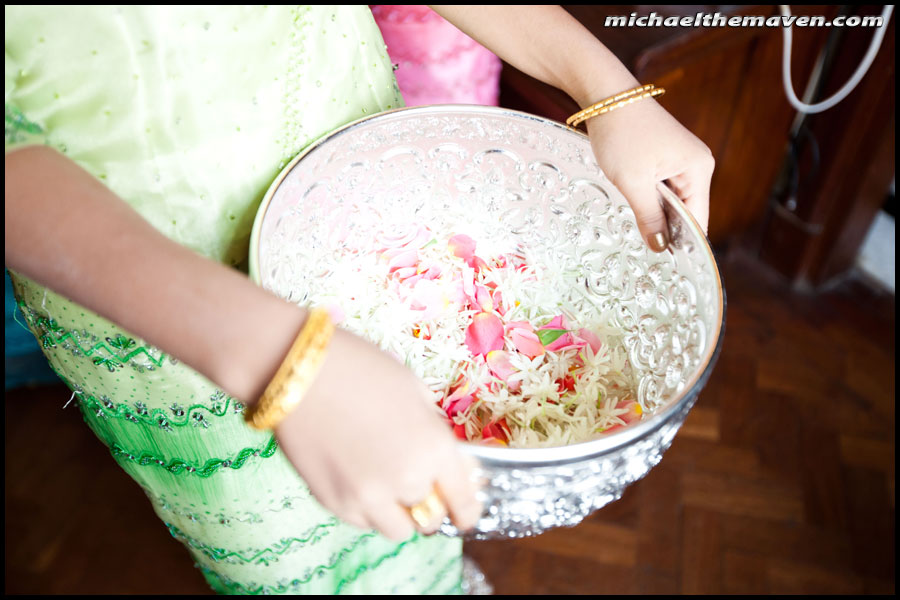 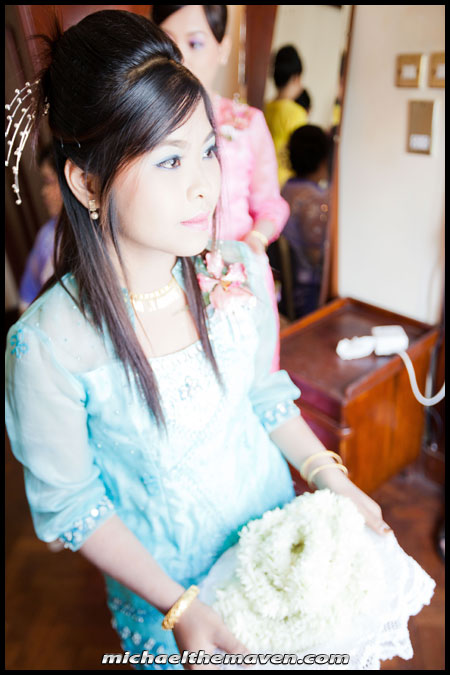 I was able to persuade the bride to allow me to take shooting into the window light. I had about 10 seconds. There was so much more i wanted to do, but they were pressed for time. Jack either has or will provide her with a print. 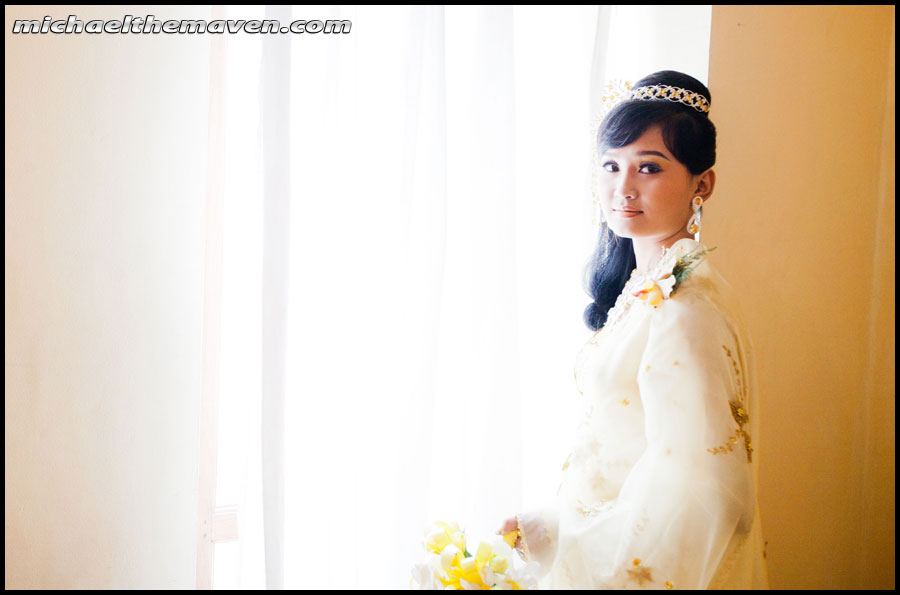 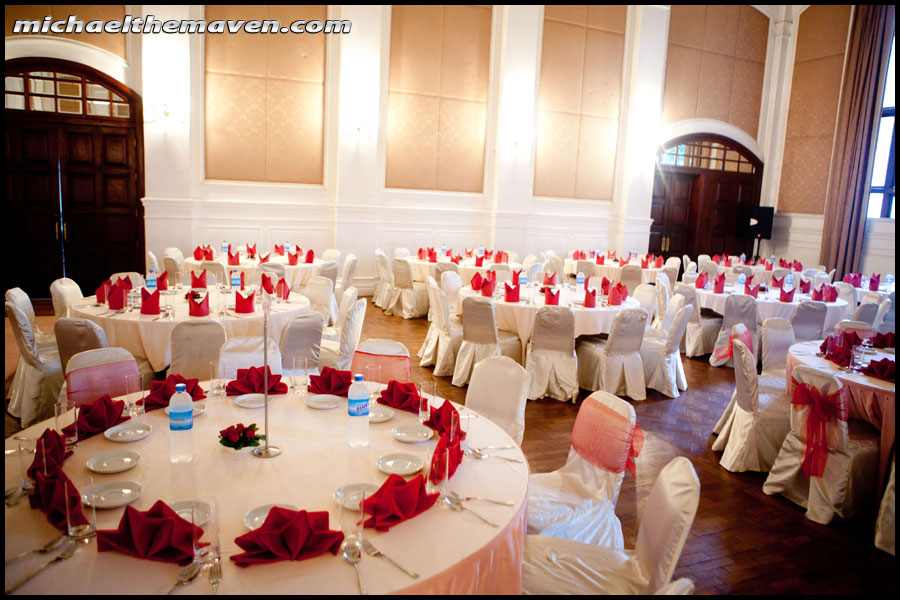 I was always interested with the number of English signs everywhere. Again, the video crew with the corded hot lights were everywehere. 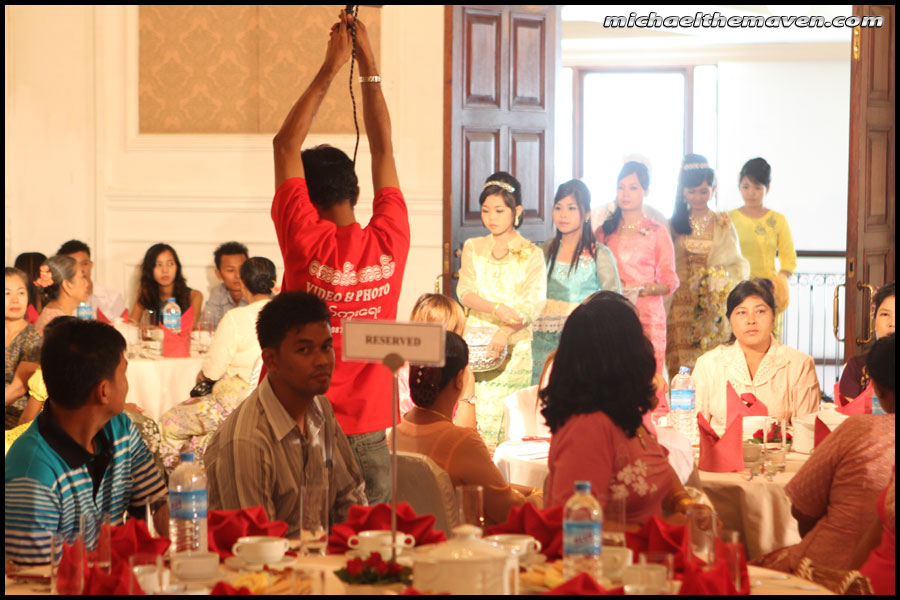 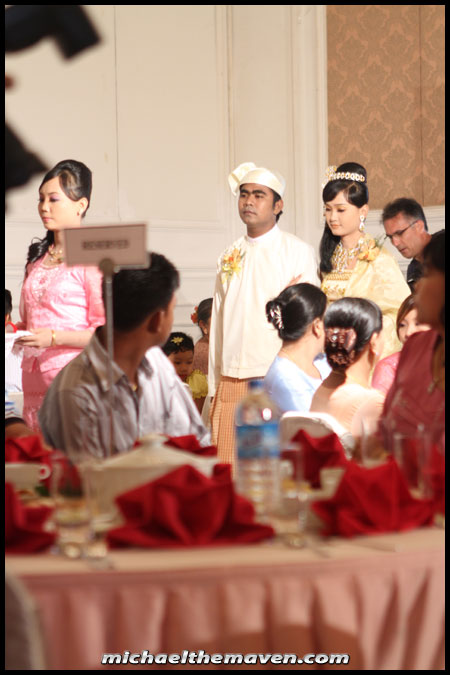 Note the degrees are written in English: 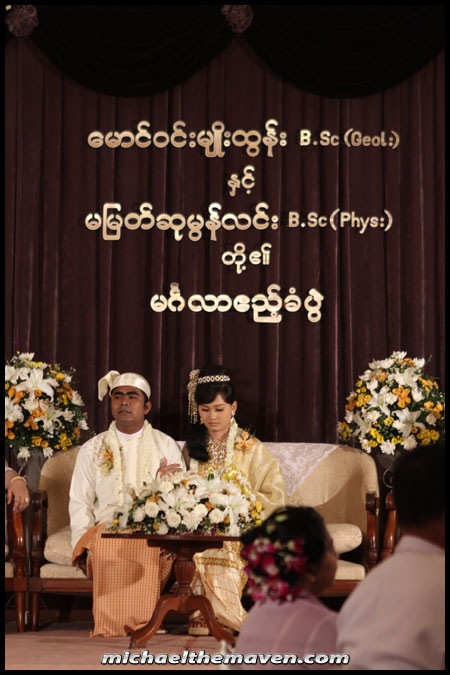 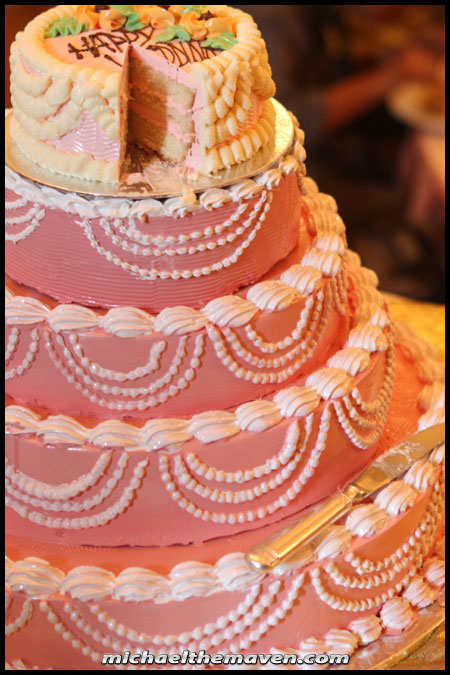 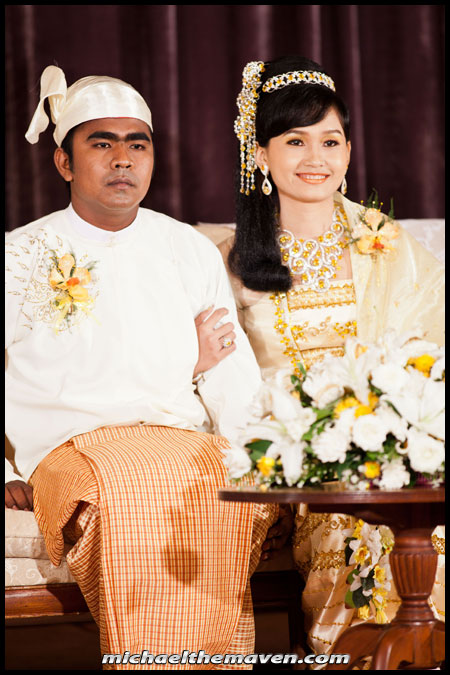 This was with Paul's new Canon 8-15mm f4 Zoom Fisheye. (Which I really, really liked btw). It has some serious great versatility for very tight shots. 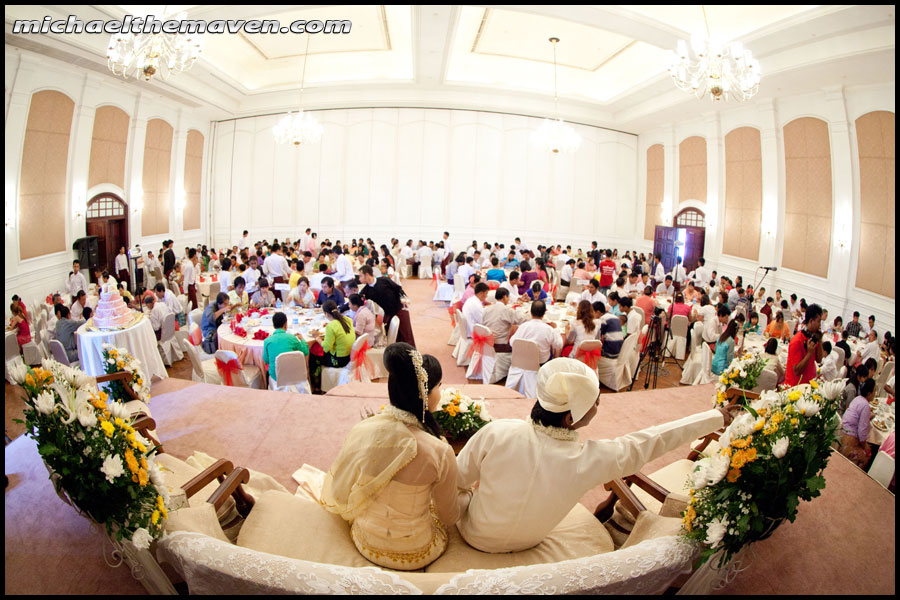 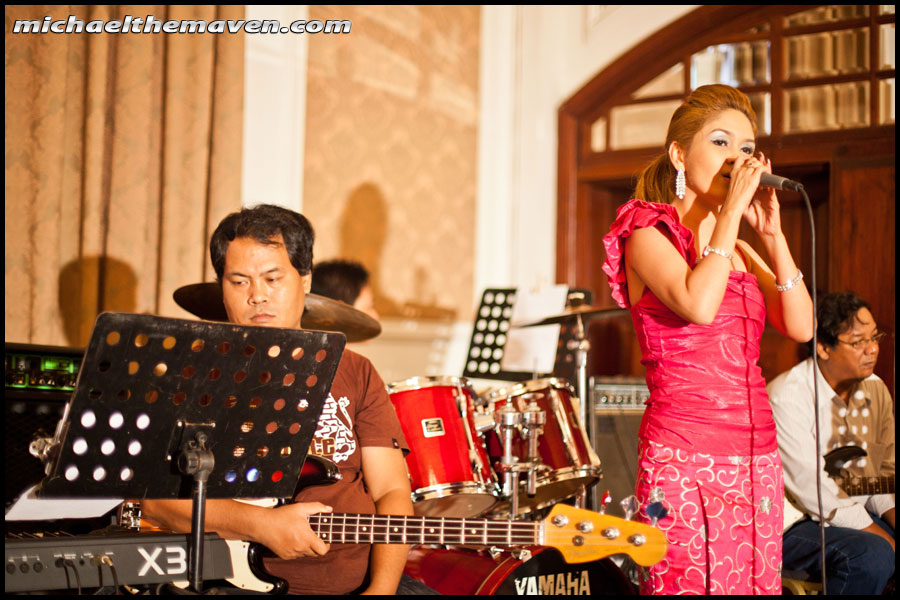 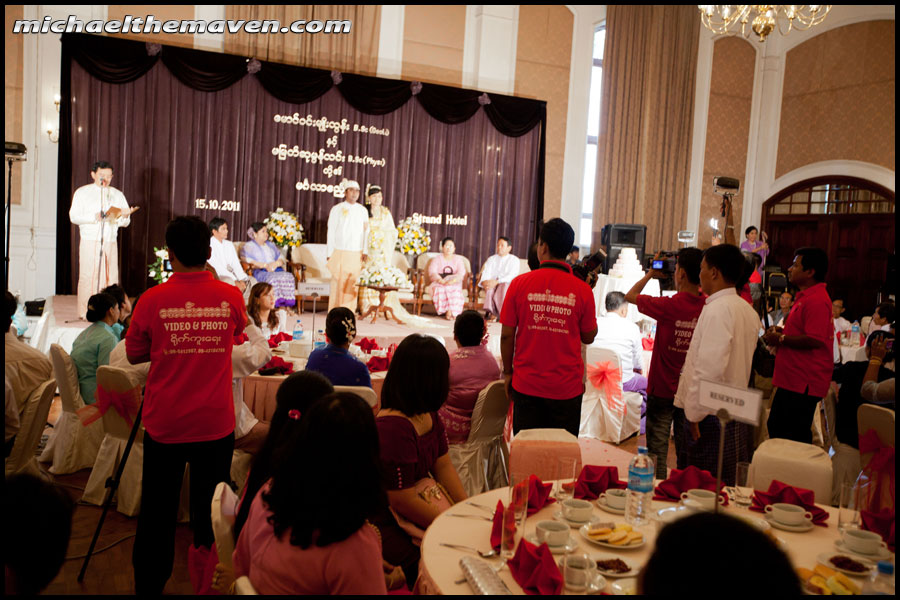 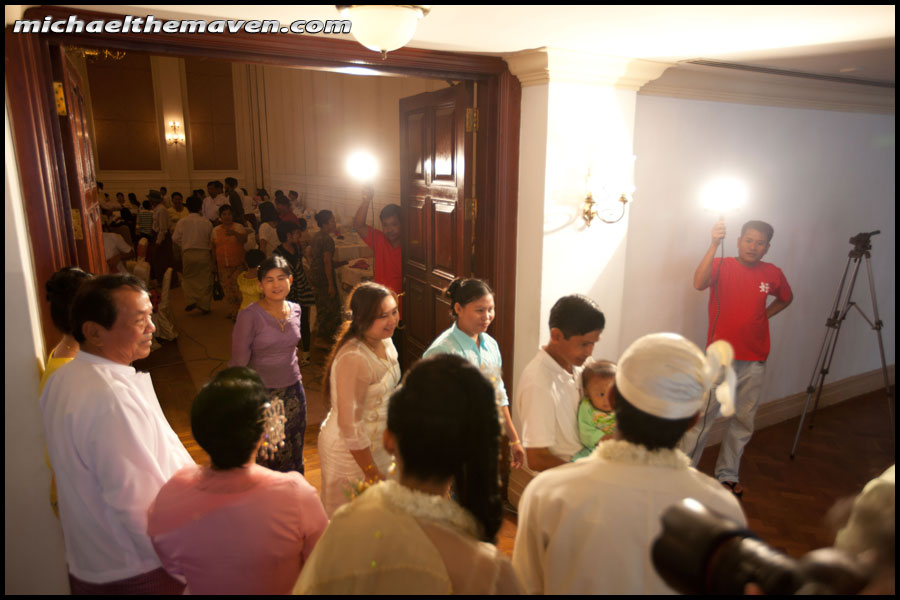 I realize it may not look like much, but if you own a car in Yangon, you are BIG TIME. 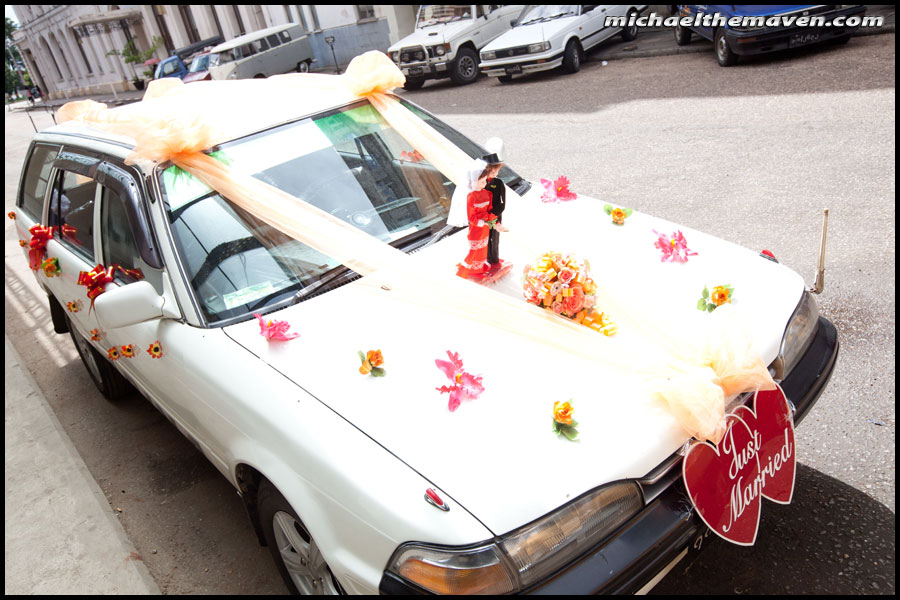 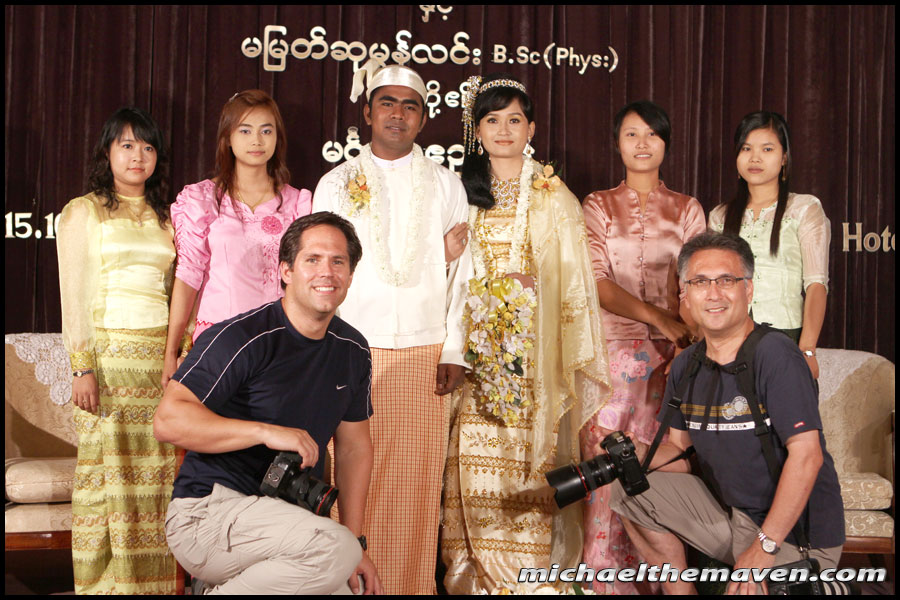 Paul and I were quite happy to have our picture taken with the beautiful couple immediately before we all had to leave. It was a great opportunity to see and be part of this Myanmar Wedding!