I'm a little disappointed with way the radiation issue has been blown way out of proportion to the degree that many aid organizations have decided not to come to Japan. I cannot speak for what is going on around Fukushima or the immediate surrounding area, but I can speak for the areas around Sendai, and North up to Otsuchi.

Three weeks into the Haiti disaster, NGO groups were everywhere. Three weeks into the Japan Tsunami disaster, I have only seen Samaritans Purse, Food For the Hungry, and the Japanese Red Cross. I know that many NGO groups that want to be here are not because they are "spooked" by the radiation threat- and to be honest, I was quite spooked when I first came in. The way the media has been painting the story is that if you are anywhere in Japan (or the US for that matter) you are in danger of increased radiation exposure.

Radioactive materials have the properties to be measured in extremely small quantities. However, just because there is an increase in radioactivity, does not mean that this increase is actually dangerous.

I've been wearing a very sensitive radiation detector for the last 10 days. This particular model can pick up readings on the micro level, and it averages around 15 micro rads per Hour.

For those interested, A milli measure is 1x10-3, and a micro measure is 1x10-6. As far as I could see, the radiation detectors worn by the Samaritans Purse workers cannot even pick up micro levels of radiation per hour, only cumulative readings per week.

In plain terms what this means is that "radiation contamination exposure" in Sendai, Minamisanriku, Ofunato, Ritzukentakata, Otsuchi and all of these areas in between is pretty much the same as it is in Atlanta, San Diego and other US cities. That's right- in a practical sense...there isn't a real radiation threat in these areas, at this time, despite all the troubles they have had with the Fukashima reactors.

It is also very easy for radiation stats to get blown way out of proportion. For example- they say they found increased radiation in Spinach- however they didn't emphasize that you would have to eat 2 pounds of it everyday for a year to equal a cat scan.

What this means is there are a tremendous amount of resources and volunteers not pouring into Japan because radiation can be detected in extremely small quantities and everyone is freaking out about it if there is an increase of 5-10 micro rads per hour here and there.

If everyone who is spooked about health concerns in the way they are about radiation, they would all stop smoking, all stop sun bathing, stop eating junk food, exercise regularly, etc. It's totally inconsistent to believe that this micro levels of radiation are somehow more likely to kill you than an automobile or heart disease.

If my radiation detector starts going nuts, then yes, I will get out of here- but that hasn't happened yet and somehow I don't think it will. It's a risk I'm willing to live with.

Tried to rest as much as possible today, but had a few planning meetings with Nathan and some of the Samaritan's Purse workers. We are trying to tweak our pipeline to get supplies brought up to us each day instead of having to come back to Sendai each day. If we can get this worked out, I see no problem in moving 6-10 tons of food and aid per day.

Met with Franklin Graham and other Samaritan Purse reps in the afternoon. He was very kind, gracious and appreciative for what we were doing.

My motivations for being here are not religious. I just want to help my Japanese brothers and sisters- that's the only motivation I need. It isn't for a reward in Heaven or because I feel God wants me to. I just want to ease suffering. I do feel that I have been given unique skill sets that can be used to help others and I also do not believe the way things have worked out are coincidence.

I say this because I want you to know that my motivation for explaining something I realized today, isn't to preach religion.

There are a few volunteers I have seen in Japan whose primary goal is to proselyte, and secondary goal is to help with the relief effort. I remember a conversation I had with one of these volunteers, he couldn't complete a sentence without talking about how religion would save these poor people when they were starving.

I've also had conversations with Nathan about this and we agree that it is wrong to use these circumstances to leverage religion. These victims need real, practical help. Food, shelter, warmth, clothing, a chance for relief and recovery.

They all deserve this aid regardless of their religious beliefs and it should be given without thought or hesitation with respect to this.

To show up with aid, and use it as a chance to try to proselyte, push religion and convert doesn't feel right. The priorities right now are 1- get aid to those who need it. If these people are touched in a way to find God because of this, that is wonderful- but to withhold aid from those who do not believe as we do would be wrong.

It was so incredibly pure and beautiful. With all these 1000s of people suffering, he singled out the one woman to help her.
I don't think I will ever forget it and wish I could somehow transfer this feeling to you. Just something I wanted to share without being preachy about it.

I shaved my beard off this afternoon. This evening Tomohito, one of our delivery drivers took Nate and I to an authentic Japanese hot spring bath. Interesting experience to say the least, but I feel so good right now it's incredible! I admit I'm still tired, but want to be rested up soon. 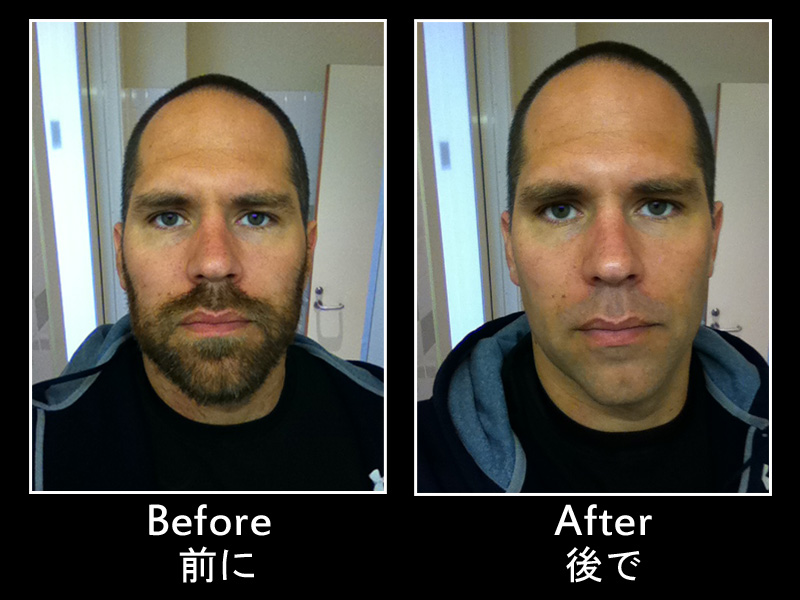