What an awesome day. We started early by delivering to the first of the locations we found yesterday, and then I broke off from the rest of the group with another volunteer named Ken, it was just us for the first part of the day.

One thing I love about the Meysen group is how well I get along with each of them. We can completely interchange and the work moves forward without snares- we are all on the same page no matter what the task, it gets a lot done.

We had a few locations that Toby sent us the day before that we hadn't checked out. At the first stop, they seemed to be doing pretty well but we asked the director if she knew of any pockets of people who may need assistance, perhaps they were old, or didn't have the means to make it to a distribution center.

Surprisingly, this woman told us about a group of people who were living in damaged homes, storage containers, and even broken cars. I didn't believe it at first, but we immediately switched our focus to finding them if they did exist.

Long story short, we headed in their supposed direction and continually asked people if they heard of them or knew where they were. The answers were all affirmative, and eventually, we found a narrow, muddy road leading to a little town called Baba Nakayama.

To our surprise, these people were living in their destroyed homes, trying to clean up their yards. We asked to speak with the area leader, named Abe (pronouced Abay) and he invited us inside his home, where 100 people are sleeping each night. (you are reading this correctly). He also said there were an additional 100 people living in the actual ruins of the town and another two groups of 20 and 30 not far away which they supported.

The main road leading to Baba had been destroyed and would take weeks to repair. Abe and his team made the dirt road we drove in on, so it was difficult to access, especially for large supply trucks. Hence, very easy to be ignored or fall through the cracks.

Abe said that the town was made up primarily of fishermen and farmers, and while they had been given some rice and water by security forces, most of what they were eating now was what they grabbed moments before the Tsunami struck. He also noted they had not showered or bathed since (over 2 weeks).

My understanding is that they were able to make it to a distribution point, but the trip was so far it wiped them out for gasoline, a precious commodity which was also running their generators and heating at night.

Without fuel they couldn't make the trips to the distribution point, which told them they would have to come in and pick it up in order to be supplied. This was the no win situation they were in and making the most of it.

We took a list of their requests, the first and most important was "enough tents to house 50 people" and two large pots to cook rice. They only had one pot and had to cook rice in it twice for each meal. They also asked for food and blankets, two things no one else has asked for yet. Their list of requests was the longest and most detailed I've ever made. Luckily, we had half of the supplies they needed at our base camp, it would be easy to make a delivery later in the day.

Unfortunately, it started raining and the place we parked our van quickly became a mud pit. We could not get out....

Being that the Baba Nakayama had been literally wiped out, there was plenty of debris around to make a path for the van to get some traction. I honestly felt a little weird digging through the rubble of what was someone's home a few weeks ago, but the task at hand was that these people were hungry & needed help, so I dug in and found 4 thick tatami mats.

Several of the men from Baba Nakayama came to help and for the next hour or so, in the freezing rain we pushed, pulled, tugged, and eventually engineered our way out of that mud pit. Ken and I were both covered in it, not since I was 10 did I have so much mud on my person.

I remember looking down at my mud covered shoes and clothing, soaked in water, all of us pushing on the front of the van as hard as we could...I loving every second of it. This is what life is all about...taking a chance to help our brothers and sisters, even if things get hard...it's worth it!

I couldn't understand a word they were saying, but we were all united in solving each others problems.

I sent in the GPS report to Nathan and then we headed back to camp to get cleaned up and have lunch. (ramen! I'm eating lots of it these days....lol) Nathan immediately loaded up his van and trailer with food, water, tarps, hygiene kits, gasoline and other supplies and we took it straight out to Baba Nakayama for delivery. They were very happy to get them, and we are working on getting them the rest of their supplies later this week. It was a very fulfilling experience. Spent the rest of the day looking for other similar groups, and we didn't find any more, but my heart is filled with gratitude and humility to be able to help ease their burden, even if it is in a very small way.

I'm not sure why I have been given me these unusual skills of doing GPS based aid work, but I know that it is something I am really good at and I enjoy equally as much.

Ready to crash again for the night, I am tired and excited for tomorrow. 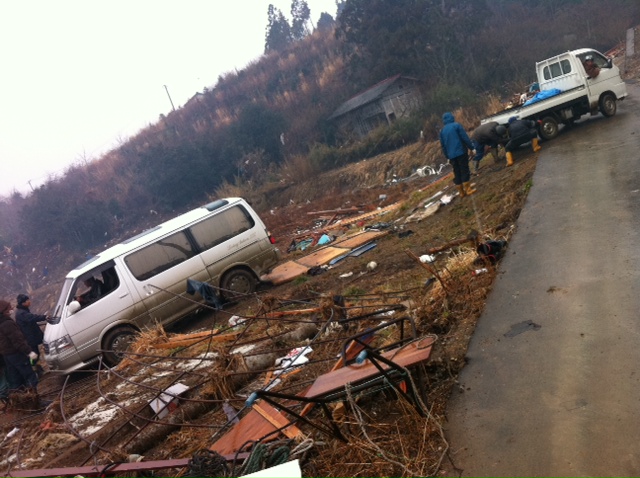