Michael made great progress over the course of the day (3/18). He was able to get into Sendai. The hotel staff gave him 3 cases of water to take with him to drink. 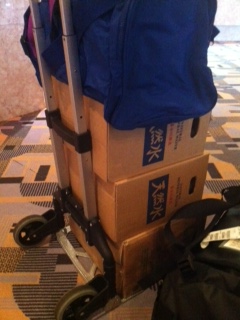 Michael's was dropped off at a random bus stop by his taxi cab driver but this gentleman spoke good enough English to help him get on the right one. Michael had a lot of gear and the man helped him load it. Michael has found that Japanese people are really friendly and helpful.
There was a lot of traffic heading into Sendai. Somewhere along the 63 km bus route a woman on the bus had a heart attack. Luckily there was also a nurse on board who was able to help her until the ambulance arrived.
Upon arriving in Sendai Michael saw that the food lines into the Supermarket were nothing like he has ever seen before. They were limiting the number of items purchased. There were also HUGE line at the gas stations. Fuel was being rationed.

Michael made it to the CRASH base camp in Sendai who has 100 tons of relief aid coming in. Seems like NGOs are working through local government leadership- NGO's deliver to them, they distribute to the community. It's very structured and organized.

The school where the base is stationed has been converted into a distribution hub- one minute food is arriving, a few minutes later it is shipped somewhere that needs it. Michael is very impressed with their organization.
Canned bread ready to eat.
They just loaded a truck headed to a Hospital that ran out of food and then went to a refugee shelter.
There are about 80 people living in this shelter- the school provided them their first hot meal since the quake.
The school has really welcomed Michael! All of the volunteers reuse their bowls and cups to save water. They mark them with pens to keep track of which is whose.

Looks like they enjoy mushrooms- Michael stuck with rice, an MRE and a zone bar. :0)
They helped the family of a Sendai airport engineer move while he was at work- they had this super cool beautiful dog.
The school has been given permission to access the express way as well as get gas without waiting. Michael feels they are a very good group to work with. They are very organized and have a working system.

As far as he knows, Michale is the first true volunteer to reach them. He hasn't heard anything back from the Salvation Army. CRASH has an operating base here at the school, but they were out all day doing assessments, so I helped the school with loading and unloading trucks for most my time today.

Michale also mentioned that it is freezing! He is wearing 3 coats!!! 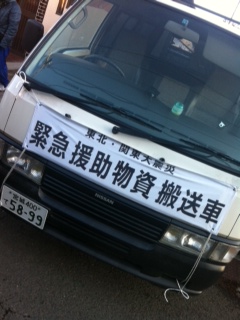