One Crazy Week - Haiti to Bama 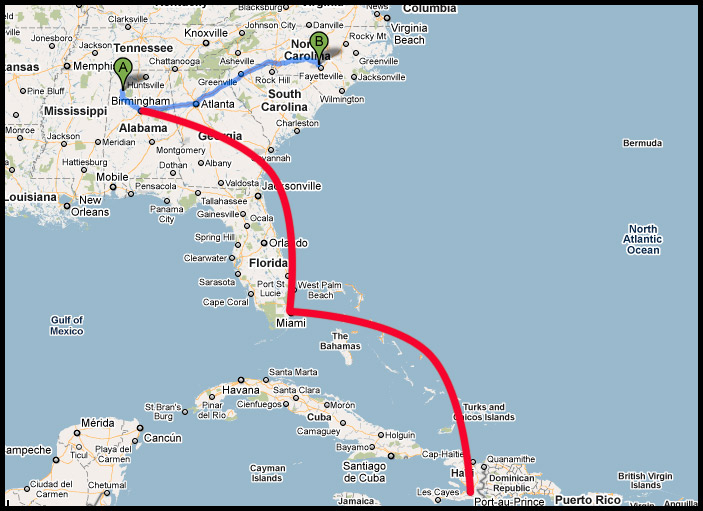 Finally, I am back posting. It has been a crazy busy week. First of all let me say thank you so much to Toby R. for posting on the Blog for me. It has been pretty much impossible for me to do it, even after I got back for the last few days.

The second Haiti trip was a great success, but I want to emphasize what superstars Craig Arnold and Andre' were. These guys really made everything happen, and Mathieu and I were largely in support roles. Because Mathieu and I had our own system and team, it allowed us to split up and divide many of the tasks between the 2 teams. Craig and Andre would do most of the "heavy lifting" work (mostly in offices arguing with people) and Mathieu and I would handle the smaller stuff, and follow up visits. This allowed us to do twice as much work in half the time.

This is close up picture of Craig- I love this guy. He is an extremely selfless and christlike person. He works for UPS full time, but took a week off to come and try to help SA get their containers. It was his game plan from day one. 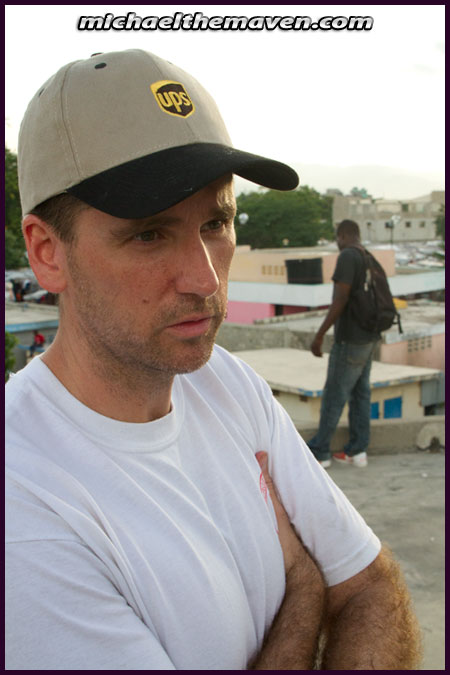 Andre- as equally gold hearted. Also came on his own dime and funded the miraculous dinner we had where we made all these great contacts. 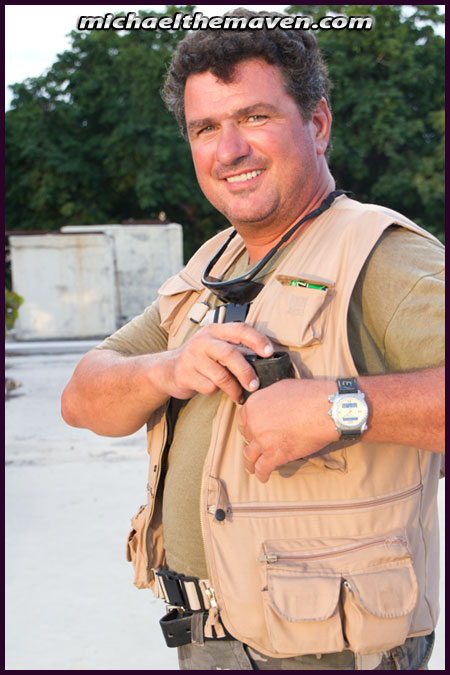 Sometimes "scoping things out" requires us to climb on top of partially damaged buildings, please do not tell me Dad. When we met up with Craig and Andre they were already up there, so I just climbed up and Andre' remarks in his french accent "yes, you see he is trained" it made me bust out laughing for some reason. 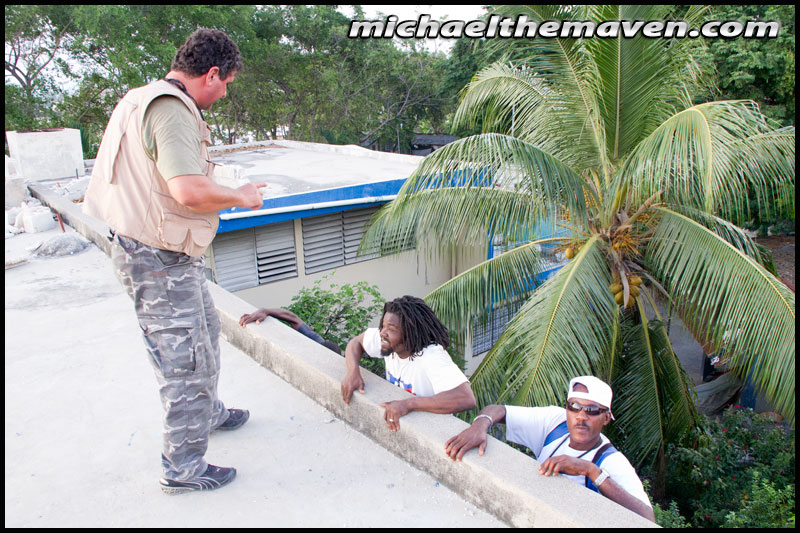 Much better view of the SA refugee camp. 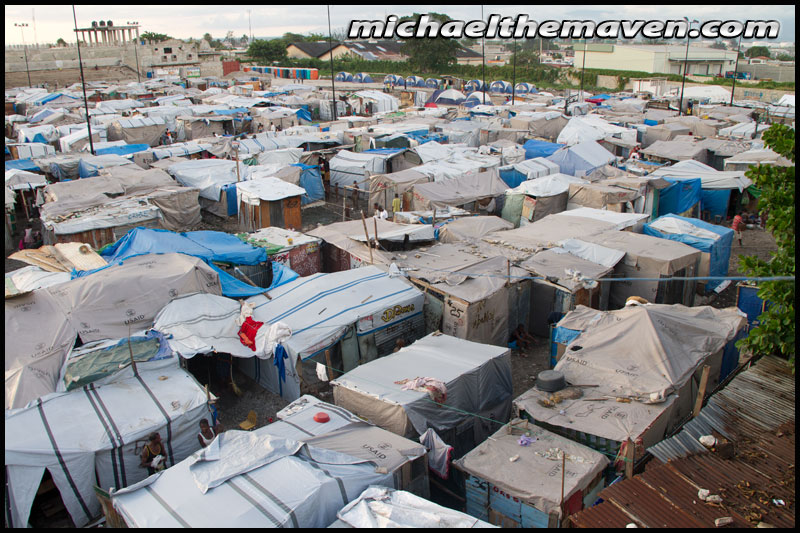 But if you really want to see what is down there, here's a closer look. Yes, that is a completely naked homeless boy. That little drainage ditch around their tents are also used as toilets. You only need to look at this once to realize how good we have it. The new tarps we got were distributed to this camp on Thursday and Friday 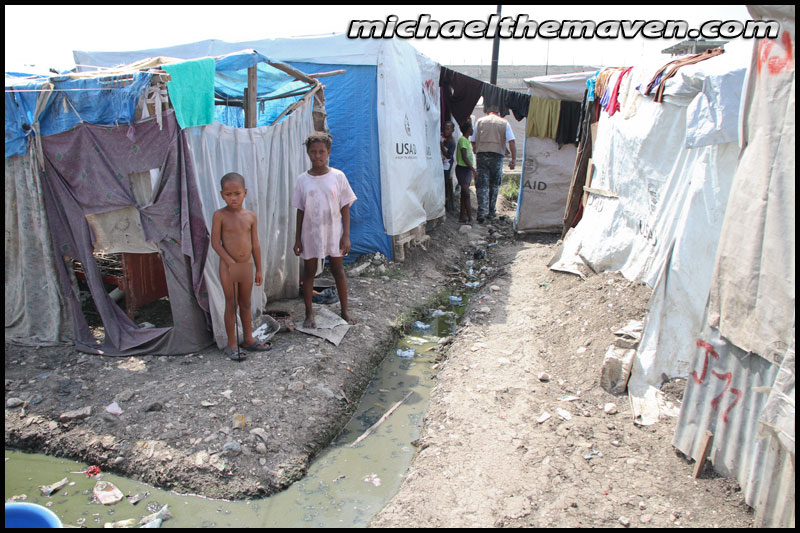 Mathieu comforting Jean, one of the orphanage directors we met last time. We didnt tell him we were coming, we just showed up with a 2 truck loads of food. He was very happy to see us as we were to see him. 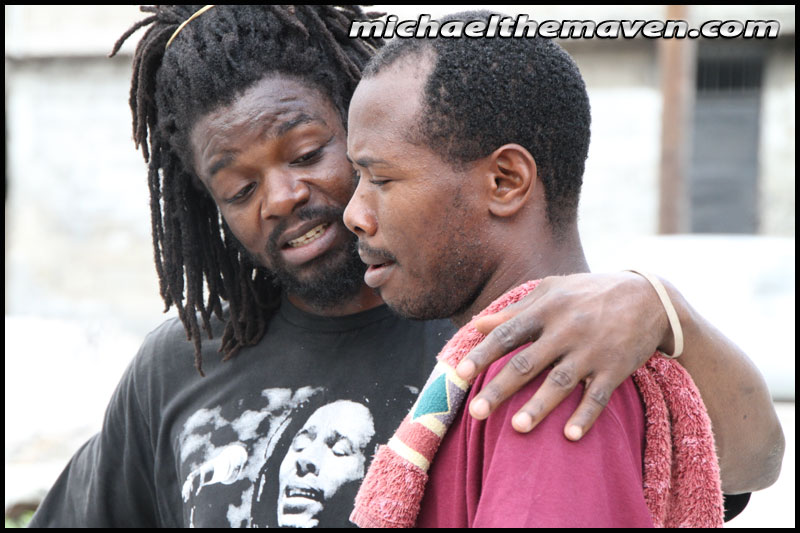 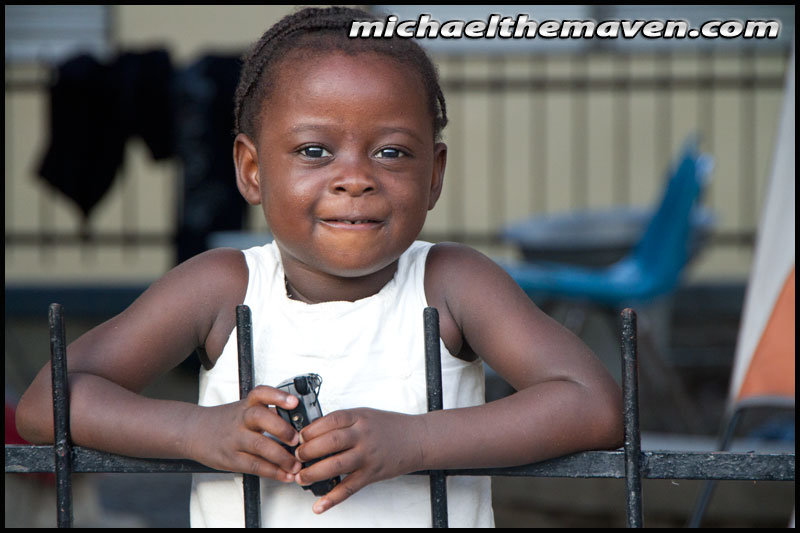 It was very difficult for me to be in Haiti and my mind wasn't really into the work like last time, I wanted to be in Alabama with Mark and his family. I had Toby check airline tickets on both Tuesday and Wednesday just in case there was a miracle of a chance I felt my part was done, I knew if I wanted to be at the service in Haleyville on Thursday, I would have to leave on Wednesday a.m., fly to Miami, and then to Birmingham. The viewing was on Wednesday night and i knew I was going to miss this part of it.

By late Tuesday night, we had gotten the clearance paperwork for most of the containers and had also arranged for security at the tarp distribution, and also figured out how to move food without security to locations outside the city (we had the shipping companies do this). At this point, most of the red tape was out of the way, and all that was left was the fun part, loading, unloading and distributing. When I asked Craig what he thought he answered "You need to go be with your friend." Mathieu would take charge of the Haitian crew (which he did) and in this sense, the team would only be down one person, me. Regardless, I did still feel bad about leaving and wanted to be there.

Mad props to Craig, Andre and everyone else who are still in Haiti and will be leaving Sunday afternoon. I have a tremendous amount of respect for Craig, Andre and Mathieu for doing what they did. Several thousands of people will benefit from their efforts for a very, very long time.

Wednesday morning, I jumped on a plane to Miami, had a layover, and then got on a plane to Birmingham. I arrived around 9pm, filthy, sick and without a change of clothing. The car rental companies don't like renting me cars because I do not use credit cards (only debit), so the Norrises, a family I stayed with volunteered their SUV for the weekend. I walked into Wal-Mart around 11pm to try to figure out what I was going to wear (as I didn't have the proper attire with me). Surprisingly, I found everything I needed.

Woke up and drove 2 hours up to Haleyville for Mark's service (which I will be posting tomorrow). I arrived about 20 minutes before the procession showed up. It was so good to be there.

I had also brought my camera, a Canon 7D , and the one lens, a Tamron 18-270, whose versatility is jaw dropping. All the images you see from both of the services were taken with this combination.

Initially, the Forester's asked the general public that no pictures be taken, but they asked me to go ahead and do what I do and I felt great to be able to contribute in this way. The service in Haleyville was outstanding, I was so impressed with the talks given by Mark's brothers and military friends. I will talk about this more tomorrow, but the town of Haleyville was amazing, there were countless people standing by the road to wish Mark's family well on the way to his burial site.

After the service, Mark's family invited me to join them to drive up to Pope Air Force base where Mark was stationed to attend his squadron's service. Again, no clothes to change into (just had the "dress clothes" for the service) so a second trip to Wal-Mart was in order. 2 nights in a row, I purchased all the clothes I would wear the next day. Weird, but it worked.

The city of Haleyville chartered 2 buses for the Forester Family and we slept on the way up. Arrived, got cleaned up and then participated in the tour/service for Mark. I will be trying to post this later on in the day tomorrow. (Lots of pictures to go through, LOTS). Words cannot adequately describe how impressed I was with Mark's Squadron the 21st STS, not so much in the traditional military sense, which they had plenty of, but in the "family" sense. This is an extremely tight knit group of people who sincerely care about each and everyone of their soldiers and their families. I immediately felt a sense of family from them. Hard to explain.

Drove back down after the services and crashed at Mark's house for a few hours. Michael Madsen, another great friend of Thad and Mark's needed to get to the airport by noon, but needed to go down to Tuscaloosa before, so I drove him. By the time I got back to Bham, I went through the pictures of the last 2 days, some of them are really good, but ultimately, I am so tired right now it is ridiculous and I need to get some sleep.

My plan is to head up to Haleyville tomorrow and spend some time with Mark's parents for at least a few days. There are a lot of images and videos that need to be put together and ultimately, I am hoping all of Mark's friends and family can help me make a really great remembrance DVD.