I've been on Twitterfor a few months now, and to be honest, I was quite confused about it when I first signed up, am still learning how to use it beneficially and have a lot to learn about Twitter, so if I don't understand something please correct me.

Twitter is essentially a mini-blog entry, much like the status of your Facebook, but it limits the user to 140 characters. I like this because it forces users to get to the point and quickly so. "Following" someone allows you to see their Tweets to the world, and when you have several people involved, its like bunch of mini-conversations going on.

The thing I really like about Twitter is that it is coming from individuals, in real time so it's faster than news. Another thing is that many celebrities have Twitter, so it allows you to get to know them anonymously.

I personally see a need for Twitter because there are rare occasions I cannot connect with the internet to make a blog post (think Haiti) but Twitter would allow me to mini-blog wherever I have an internet connection. It's short, fast and easy to do.

Here are some of the things I have learned:

You can send a Tweet to the world in general by just typing anything you want in there.

"RT" means - "Repeat Tweet", it also shows up as a little yin/yang symbol. It's a quick way to re-tweet something someone else said and give them credit for it.

The Hash Mark "#" means to put your tweet into the results of anything that comes up in a search for those terms. Say you want anyone interested in photography to see your tweet if they search for that term, you would write "#photography" at the end of your tweet.

Because URL's can be exceptionally long, there are websites like Tiny Url and Bit Url, that will shorten a website address to a few characters and it saves some space. In order to do this for so many links, the URLs have really weird and random combinations of letters. This explains the weird link addresses you see at the end of many tweets.

Lists allow you to organize people you follow into categories and subjects, such as "photography" or "mac stuff"- these are things you decide and arrange. By viewing your custom "lists" it filters out everyone but those people you have added. Great for reading the latest news about a particular subject.

One exciting feature of the new Maven App (coming very soon, it was submitted today) was that everyone who downloads this App will be able to read my Twitter feeds, even if you do not have a Twitter account. If you do have one, it will also allow you to message me directly, (which is more likely to get an answer than a long email) as well as your and my friends. I know this is going to sound weird, but there are quite a few of you out there who have formed some pretty good friendships with other Michael The Mentor forum users or school students. This feature will allow us to all stay connected better.

Here is a screen shot of the Twitter feature on the new Maven App. For now it is pretty simple and straight forward, but we have some new features coming soon: 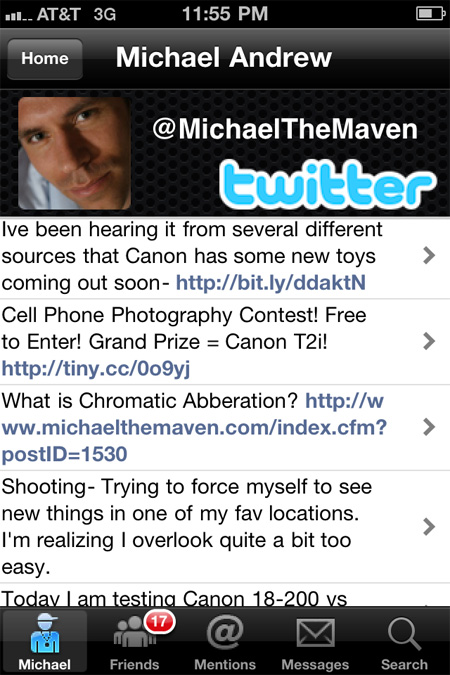 I originally thought the Icon for "Michael" was a coach with a whistle, turns out it is actually a "rapper". Oh well... :)