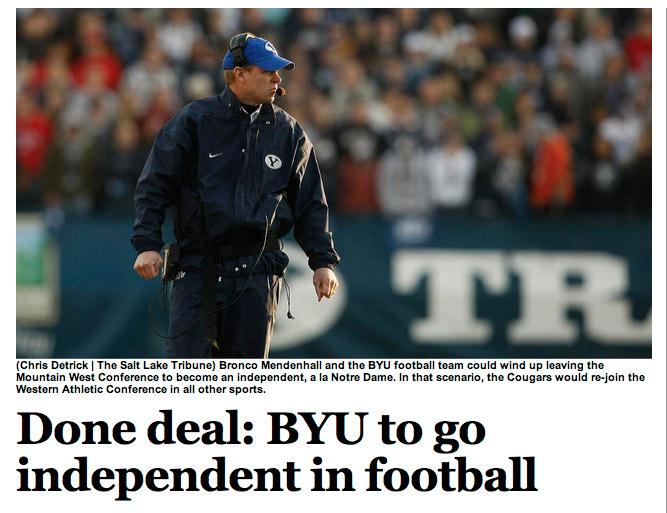 I just heard about this, apparently they have been mulling it for a while. I know BYU Football may not mean anything to most of you, but it does to me as I played there for 5 years. I earned my first Varsity Letter as part of the 1996 team that went 14-1 and was snubbed from playing in what was then a BCA bowl. BYU has always gotten a bad deal being a member of the WAC and MWC, in that all of their earnings and television time had to be split in some way with other members of the conference (the WAC had 16 members in 1996).

It has especially hurt their television rights & earnings, and for the past 3-4 years its been nearly impossible to watch games because of the bickering between league officials and the owners of the broadcasting rights. Earlier this year, Utah left for the PAC-10 (starting in 2011) and BYU was snubbed again, not receiving an invitation, mainly because BYU doesn't play on Sundays and they didn't want to have to deal with scheduling headaches. They were essentially laughed at as being the unwanted step-child.

Fine. BYU will go solo! (assuming LDS church leaders approve it, which I can't think of a single good reason not to).

BYU will be able to book any team willing to play them, keep all the Bowl earnings, as well as all of the media rights. What this means is I will probably be able to watch most BYU games now on TV. Granted there is still no guarantee at a BCS Bowl, but who cares?!?! It's not like that was happing anyway.

I know BYU typically finds a way to falter 1-2 times a year, even in the best of seasons, but this is a HUGE opportunity for them and I am very excited about it!