Photography is Not a Crime 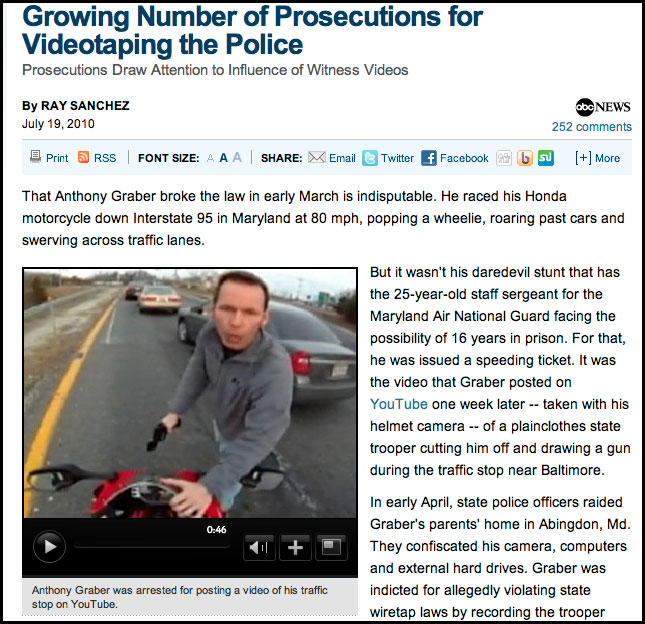 Thanks to Adrian who posted this in the forum- I heard about this case, but did't know the status. Im attaching the link to the article, as well as another website which has documented cases of photographers being arrested. Apparently, Anthony Graber was show-boating on his motorcycle, and he was also wearing an on helmet video camera. He was pulled over by an plain clothes police officer who drew his weapon. This video is posted all over the internet. Anthony is now facing up to 16 years in prison for violating Maryland wiretap laws.

I have a tremendous amount of respect for law enforcement officers who put their lives on the line everyday, and I would say the very vast majority of them know the rules and follow them themselves. However, when I hear of cases of people being arrested for videotaping or photography in public places, where there is not a "reasonable expectation of privacy" it really upsets me. While it doesn't happen often, and every circumstance is different, I believe many of these cases are clear violations of a person's 1st Amendment Rights. The article sums it up best: If the Officer is acting legally, he shouldn't have to worry about being videotaped in the first place. Additionally, different states have different rules, so it also depends on where it happens.

I will say this, there are times and places where it is absolutely illegal to photograph or videotape someone, especially when they have an "expectation of privacy". While I am not a fan of Paparazzi's, I understand why they are allowed to essentially harass movie stars, I just wish they would do it from a distance and just have some basic human courtesy.

Having got a ticket myself from a freaking security guard for photography sakes- there is no question in my mind photographers' rights are violated on a regular basis.

I do believe it will eventually come to a "Tipping Point" , and the time is getting close (impossible to say when, 5-10 years maybe?). Technology is getting smaller and smaller, more and more people are carrying cameras and video cameras (cell phones) and it is becoming more and more difficult to even know when and if you are being recorded. Eventually, all of these cumulative events of photographers being arrested, combined with the evolution of technology will lead to a major change in our society, I just hope it will be in favor of 1st Amendment Rights, rather than taking them away.

Photography is Not a Crime