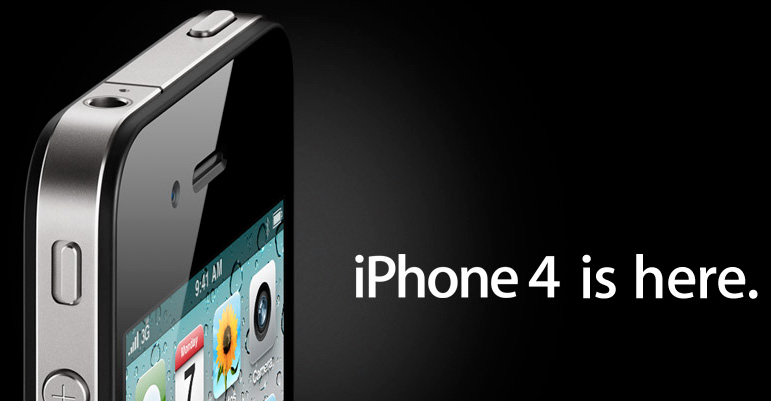 Picked up my iPhone 4 yesterday and wanted to tell you guys my initial impressions.

I arrived at 730am at the Chandler Mall and figured since I had pre-ordered I would be in and out in maybe 1-2 hours. There were a TON of people there, several hundred. I immediately noticed that there were a lot of weird things going on, some good, some bad.

1. I give Apple props for handing out water & Gatorade, various snacks and what not and a little later on in the day, Pizza.
2. Once I got in the store, the service was fantastic and they had my 32GB iphone reserved as promised (which was otherwise sold out) for walk-ins.
3. Even though I had only reserved one iPhone, I decided to push my luck and ask for another, they gladly obliged. They had what seemed like hundreds of 16GB iPhones there and allowed me to purchase another for my Father. No problemo.

This was a little curious because it told me that there was indeed excess stock at the store, and not a little. While Apple reports that it sold 600,000 pre-orders, there were probably much, much more actually sold yesterday. Its possible that Apple has found a way to artificially manipulate demand just a little.

Think about it. Make a million (or 2 million for that matter) iPhones, and then sell out of "pre-orders". Perceived supply goes down, (which may or may not be the actual case) Perceived demand goes up...way up. Websites curiously have several issues (for the next several days), again, supply goes down, demand goes up. Apple conservatively forecasts that new shipments wont be available until July or August, again, perceived supplies go down, demand goes up. I am wondering if this is all a very brilliant marketing strategy?

There were a few things that I didn't like about yesterdays pick up:

A. The fact that Apple was letting walk-ins come in and buy. They were slowing the process down for those who had pre-ordered. At first they said it was a 5:1 (they would let in 5 Pre-Orders for every one, but in reality, it was probably closer to 2:1.

B. While the service was great once inside, they probably could have had more employees there.

Other than that, I was pretty happy with everything. I was able to get my phone in a few hours, as well as one for my Dad who wasn't expecting it for months.

I've only had it for a day now, but so far my first impressions:

1. The improved screen is one of the biggest things to me. Its freaking awesome. SO sharp!
2. Clustering Apps- I LOVE it. I had pages of Apps before and now have just 3-4 because I can throw all of my "Reference", "Games" and "Photo Tools" Apps into separate folders.
3. The phone is smaller than the 3G and 3Gs.
4. It seems faster- to do anything. Not only opening Apps and websites, but even calling seems faster.
5. I like the new camera and video abilities. The Led flash (both constant for video and flash for photo) are very nice.
6. iBooks is able to transfer all of my previously purchased eBooks for my iPad, into my iPhone.
7. Oddly, iBooks is also able to open up PDF Contracts saved from Contract Maker Pro. Very, VERY, nice!
8. The resolution of text on the Apps is extremely sharp. If the update for the iPad is anything similar, this will solve all of the resolution issues we are seeing in text with non-native iPad apps. That update will probably come later this fall.
9. Im not crazy about the glass on the back, this is going to get scratched very soon. Will need to get a professional plastic wrap over it. For now I just left the original plastic that came with it, just took some scissors and cut off the bottom tab and the corner where the camera is.

As far as all the reports about touching the left side of it hurts reception, I haven't been able to reproduce this myself, though I may not be holding it in the right-wrong way. Reception has been great, so far at least.

Anyone else get your iPhone 4? If so, what are your thoughts about it?