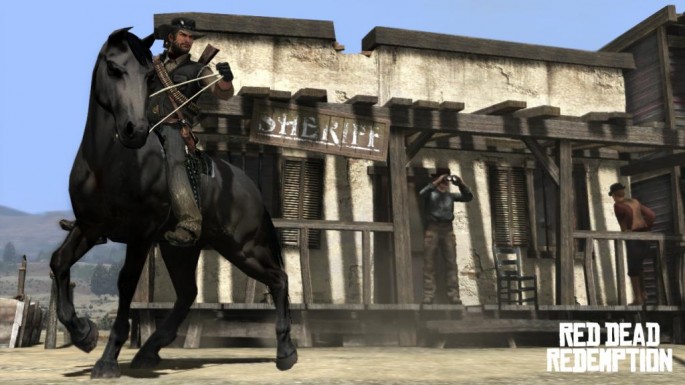 A second game I picked up this week is called "Red Dead Redemption" for the XBOX 360. Ive played it for a couple hours, and it is very different than Alan Wake's linear format, I come to learn that gamers use the phrases of "Open World" and "Sandbox" to describe it's genre. As a photographer, it's easy to pick out actual images (as in real life stills) used for many of the backgrounds and textures, especially in the skies.

Why should this game matter to you? I realize many of you probably don't even play video games at all, but something that caught my eye was in the instruction manual. There are probably over 1,000 people who helped design and create Red Dead Redemption. While I will never have to the time to invest to even come close to finishing it, it totally gives you the feeling of what it would be like to be a "bad-cowboy-gone-good" at the end of the Western Era, taking place in 1911.

For those of you who are interested in video games, it rates at 9.7 out of 10 on gamestop's website, one of the highest ratings ever. Alan Wake comes in at 8.5.

I am absolutely astonished at how much detail was put into this thing, it is absolutely crazy and even more astonished with the fact they fit it all on one DVD. You will have the opportunity to do just about everything you ever imagined a Cowboy in the old west might do, from duels at high noon, to shooting a noose in half to save a friend. Additionally, your actions greatly effect how the game plays out- you can choose to be good, or not-so-good.

A few things I do not like about it, sometimes traveling between towns is tedious, you can ride your horse, which takes a while or set up a campsite and instantly travel, or ride a stage coach- it's just takes too long to do in any case, but I understand this is the idea of "open world" games and in terms of size, I have never seen anything like it. The next closest "open-world" game that could compare would be Assasin's Creed and then Crackdown. Sometimes the cinematic clips are long and I am definitely not a fan of the bad language- it's unfortunate there aren't some settings in the menu that you could adjust for this, but other than those- wow...what a game. I am seriously impressed.

Have a big family shoot this afternoon, should be a good time.

New App should be submitted to Apple this week- I haven't said much about it, but we've been working on it for 3 months, so I am excited to get that thing done.