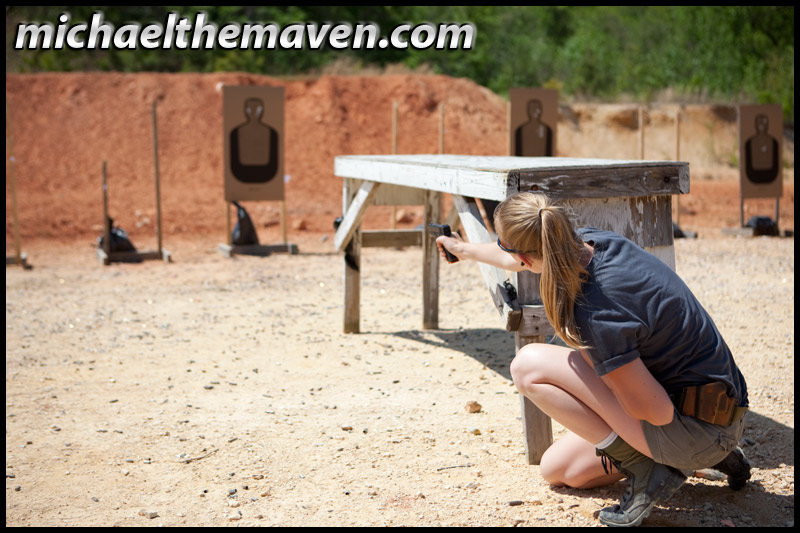 Had a GREAT day today. Made major improvements in my aiming and how I squeeze the trigger. The thing that helped the most was concentrating on slowing everything down as much as I could and instead of worrying about going fast, I focused on using correct technique, even if it took much longer. My accuracy greatly improved. This says a lot for learning anything new- focus on going slow and learning perfect technique. If you rush it and learn poor technique, you will have to "unlearn it" and sometimes this is very hard to do. Get it right the first time, then worry about speeding it up later.

One thing we do is load single dummy rounds into each of our magazines randomly. It does a few things for you, 1- It simulates a misfire and 2- If you are squeezing the trigger correctly, and you get to a dummy round, the gun will not fire, will just hear "click" and if you are pulling correctly, the gun will stay absolutely still. If you have trigger control issues, you will shake the gun when you get to the firing point, even though no round is coming out because you are anticipating the recoil. It is a great indicator whether or not you are pulling the trigger correctly.

We did a lot of "weak" handed drills. Molly, the girl in the picture is left handed, so this is actually her "weak" hand. We did all kinds of drills regarding clearing various types of jams, assuming you no longer had a functioning "strong" hand.

- One of my favorite parts of the day was learning to shoot the Glock with just about every finger from each hand, and even using a ball point pen to fire. And YES- we learned how to shoot it upside down, with our "weak" handed pinky...just like you see in the movies! The crazy thing about this is....if your pull on the trigger is smooth and steady, and you are aiming the same, you will be nearly as accurate as you would in your strong hand index finger. Also learned how to shoot with 2 pistols at the same time. Pretty fun stuff! 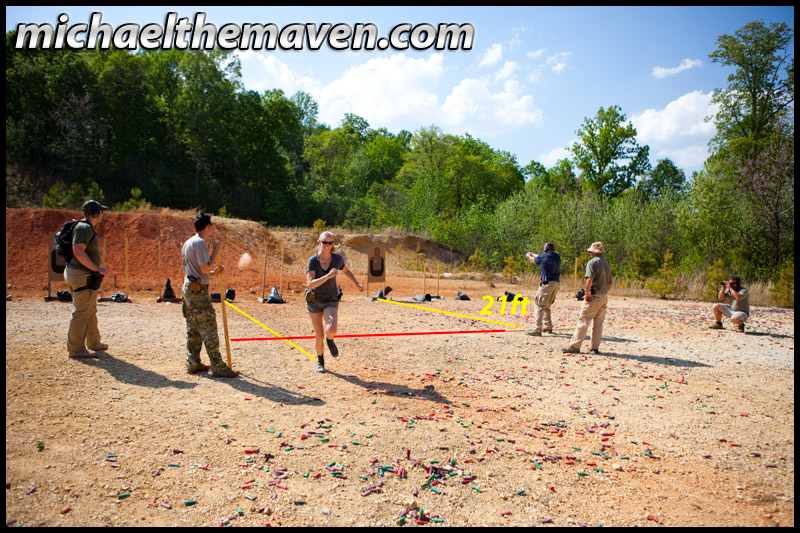 This one exercise was really mind blowing- We marked off 21 feet from the targets and stood behind a wooden plank. We had a "runner" way off to the left of the shooting target and on the instructor's mark, the runner started running. Most of the shooters were not able to get an accurate shot off before the runner past the 21 foot mark.

What this means is...if you are armed and have someone start running at you from a seemingly long 21 feet away, chances are they will be able to get to you before you can accurately shoot them. This image is the shooters first shot. Look at the picture and see where Molly is, she isn't exactly a lighting bolt either. I know it is hard to believe, and I wouldn't have if I didn't see it myself, but here is just no way an untrained individual can get their weapon out of their holster and fire accurately before the runner passes the line. This is just one of the many exercises we did that really open your eyes to gun safety and awareness. Most people who buy handguns think that just because they have them, they are safe, when in actuality, there is a ton of training that goes into learning how to do it correctly.

I am proud to say that I was barely able to get a round off at about the 21 foot mark, the first time it was a shoulder shot, the second in the heart.

After three days everything is becoming more and more reflex. It is getting easier but I am still making mistakes.