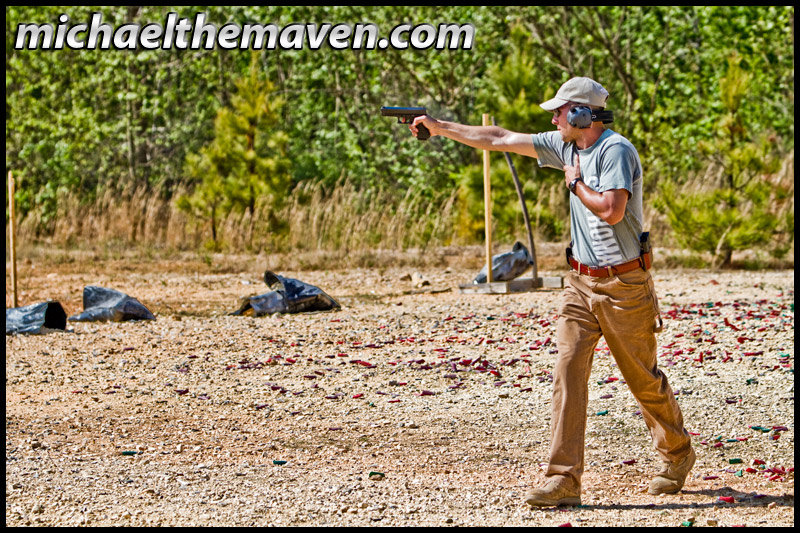 Things I learned from Fighting Pistol-

For the record, I realize now more than ever that I hope I never have to use a firearm on another person, even in self defense. Its just not something I wish or hope for. Anytime a life is prematurely ended, even in self defense, it is a tragedy. There also is just a ton of baggage that comes with a successful self-defense using a firearm. There could be a police record, possibly of being arrested, prosecuted, hated/hunted by others, emotional stress / trauma, financial loss etc. It is always better to avoid it altogether if you can.

I learned that the best weapon to overcome a violent confrontation is not a firearm or the training to use it. The best weapon you have is your brain, to keep yourself alert, constantly assess potential threats, avoid/diffuse bad situations, etc. These are better solutions if possible than shooting someone.

On the other hand, I also learned that there are occasions and times when there simply is no other option than to open up on someone. There are perpetrators in the world who will not only kill you, but your family and others if they had the chance. Its not a comfortable thought, but it is very real, has happened and will happen again. I was shocked to learn that over 30 Alumni of "Fighting Pistol" have been in violent confrontations, one, who chose not to carry his firearm with him was murdered in cold blood over a dog. I was amazed to hear of some of the stories of past students who had taken the class and were then thrust into a situation that they would have surely been killed. This is what makes me uncomfortable with not having preparation and a solution to these types of situations.

James Yeagar has been inviting me to come take a Fighting Pistol for at least 2 years now, but it wasn't until I was in Port Au Prince, Haiti two months ago that I realized how badly I needed it. My good Haitian/American friend Mathieu and I were coming back from a delivery. It was late, dark, and well known that gangs were on the streets at night. We were driving in our local pickup truck (also called a Tap Tap) and out of no where, a local jumped in the back with us. Mathieu politely asked him to leave as the tap tap was being rented by us. The stranger refused to leave saying it was ok and he needed a ride. He was carrying a bag with him and we had no idea if he was armed, but he was definitely bold. Mathieu asked again, and he refused. We had no way of communicating the situation with our driver without tipping off the stranger. The three of us were looking each other up and down, when Mathieu finally unzipped his backpack which was strapped on his chest and stuck his hand in, as if he was now holding a gun. He then began to stare our unwanted passenger down. The tension was through the roof and my most dominant thought was: "I wish I had a real firearm right now". After a few seconds of huge tension, the stranger finally got spooked and jumped out. I feel we were very lucky that night, especially because Mathiew was not armed.

What I am trying to say is that no matter who you are and what you do, no matter how careful you are, you are not immune to danger- sometimes it will find you and jump into your life. I was really impressed with Jay's comments about how most serial killers can spot, select and even groom individuals who believe "it just cant happen to me". It can happen to you. It happens to people like you everyday.

So essentially "Fighting Pistol" for me has been, "if I learn it and never need it, there is no loss, if I don't learn it (and prepare accordingly) and need it, it could cost me my life or the life of someone else" and in that sense, it just isn't worth not knowing.

One of the most dominant thoughts I have about the course is that it is absolutely insane that there are so many gun owners out there that have absolutely no formal training with their weapons. (Heck, there are surely several thousands who have some training, but not enough).

I have been shooting here and there over the years, but the amount of information taught is nearly overwhelming. I do not feel I mastered anything taught, which in turn means I have a ton of work and practice to do. And this is after feeling reasonably comfortable and confident with firearms before the class started. The class taught me I really knew nothing, and now I know just a little more than nothing. I think that EVERYONE who owns a handgun should at absolute minimum take "Fighting Pistol" and if not you are probably better off not even taking the thing out of the holster in a violent confrontation. So many things can go wrong, and the thing that I couldn't get my mind around, was that everyone in the class was making mistakes, no matter how many times Jay and Paul corrected and re-corrected us. Once your adrenaline gets going, you just aren't going to be able to think about it. It has to be a REFLEX. If we were making mistakes after being taught correctly how to do it, how in the world can anyone possibly, reasonably believe they can get it right with no training at all? Its just absurdity.

I will also say that everyone in our class showed great improvement. There were some women and older people who became very proficient by the end of the second day. Not perfect, but I remember watching the oldest guy in our class shoot and move to cover and I was thinking "If I was a bad guy, I wouldn't want anything to do with him". It's crazy how much of it is mental and muscle memory. I imagine it will take thousands of reps of drawing and shooting to finally master everything to the point where you do not have to think about it anymore, and this is what you need if you plan to carry a weapon in self defense. If you are going to carry, you absolutely must master the use of the weapon, not in thinking, but in reflex.

Some other things I learned from the class-

- I am convinced now more than ever that Glocks are the only way to go, specifically the G19 or 17. We were very rough on them and they were extremely reliable.

- I have SO much to work on, I am seeing some improvement in my grip, but my biggest weakness is maintaining correct sight lock.

- I feel obligated to learn gunshot first aid now. EMT crews cannot arrive to the scene of a shooting until police have first ok'd it. What this means is, if someone has been shot, they can bleed out because the ambulance wasnt able to get there in time.

- Carrying a weapon means there is greater responsibility, a need to exercise greater caution, judgment, pre-planning, preparation (in many ways), it is not a license to be careless or reckless.

- I think one the most favorite things I learned was how to protect yourself and fire at point blank range (essentially having someone right in your face grabbing for your gun). I am proud to say I emptied an entire clip into the perp without even blinking, retreated and reloaded no problemo. (it was probably the only think I did right all day).

- I am very grateful to James, Jay and Paul for the outstanding class they have offered and highly recommend it to anyone who is looking to get excellent firearms training with their handguns.

Tomorrow starts Advanced Fighting Pistol- It wraps up on Friday. I will try to get some more shots, but it is tough to do so when I am trying to learn what is going on. Our instructor has taken some images of us and I hope he has a few good ones I can share with you all soon! 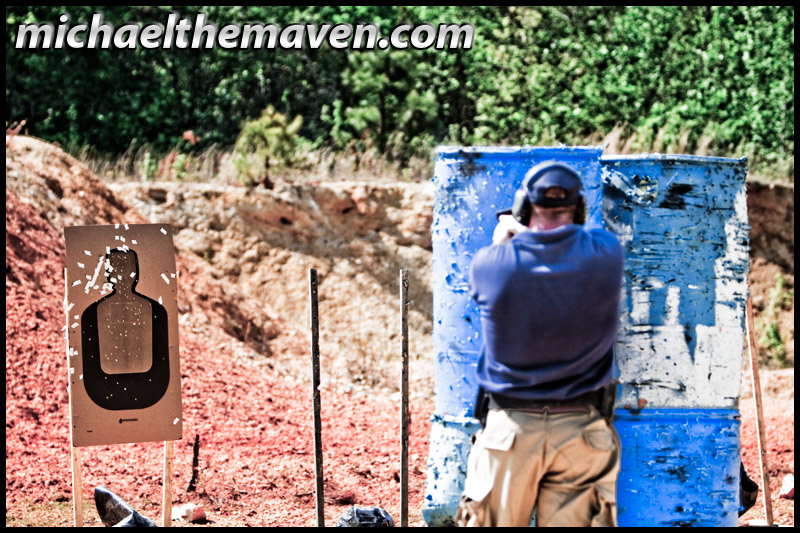 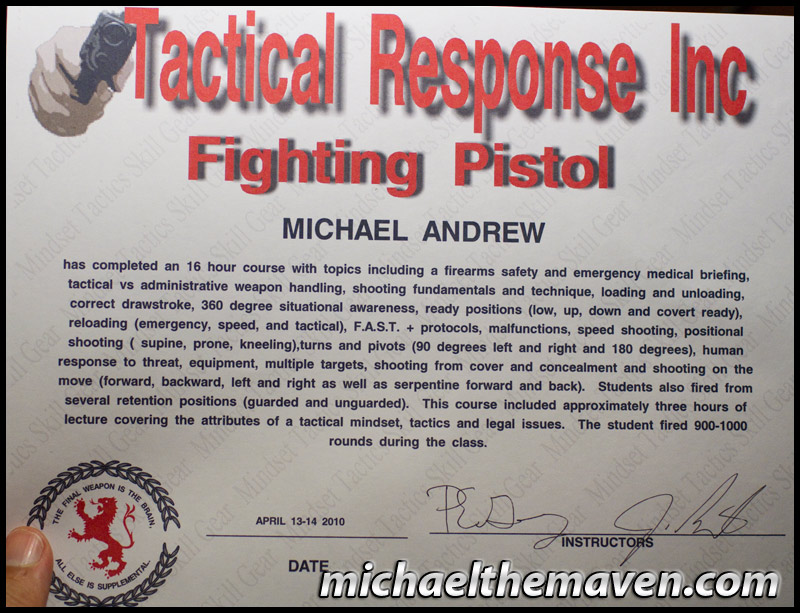