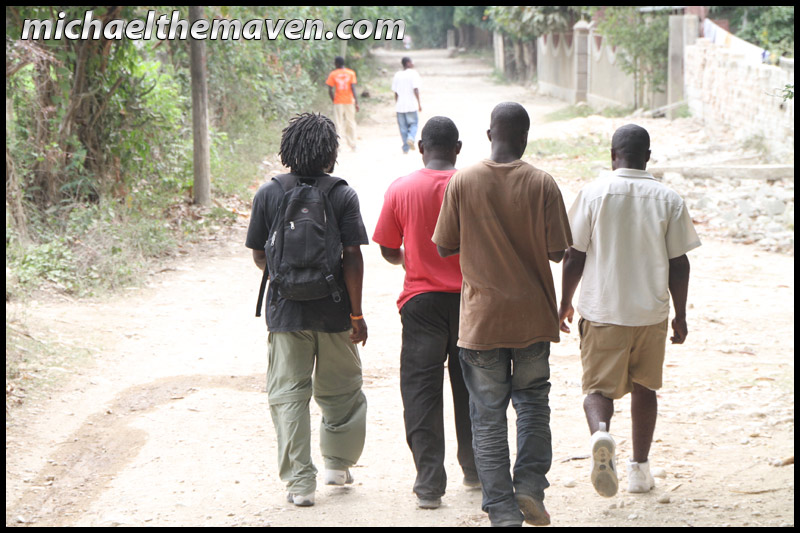 A few days after our arrival, Mathieu and I kept on receiving reports of an Orphanage in Titayane (about a half hour north of PAP) that had 500 children who had no food or water. To make things tougher, we had no address or even the name of the orphanage, just "There is 500 homeless starving kids in Titayane." Initially, we believed there was nothing that could be done, but after a few days we discovered the best way to try to find them was to ask around.

It became very evident, very quickly that Mathieu and my partnership was very dynamic and could handle many different types of situations. I could go places that most aid workers couldnt go, simply because I was with Mathieu and his relatives (say for example the up into the Jungle mountains or City Solei or out and about at night) and many times, Mathieu was only granted access to locations because he was with me (say a US or Canadian Military Base or Embassy).

I could also rely on him and his cousins to gather information on the street from the locals in a way I could never imagine and I could relay that information in real time to Toby, as well as other aid organizations who wanted to help us with the contracts and technology I had. It became clear that Mathieu would handle certain tasks, and I would handle others. After some time, we didn't even need to talk about it, whenever a need came up, we both knew which one of us was best equipped to handle it, and we did.


The American Sisters gave us some good leads on other orphanages in the Titayane area and we found one of them at an entirely HUGE enclosed compound. They had secure walls and when we arrived they were loading a adult patient into an ambulance. (This was a sign of an orphanage being very well connected). There was a second adult man there who needed a ride to the main road so he could get a Taxi to the same American run clinic for what I believe was a complication with an amputation. Why they didn't just go together in the same ambulance I will never know, but we ended up giving the guy a ride to the road. 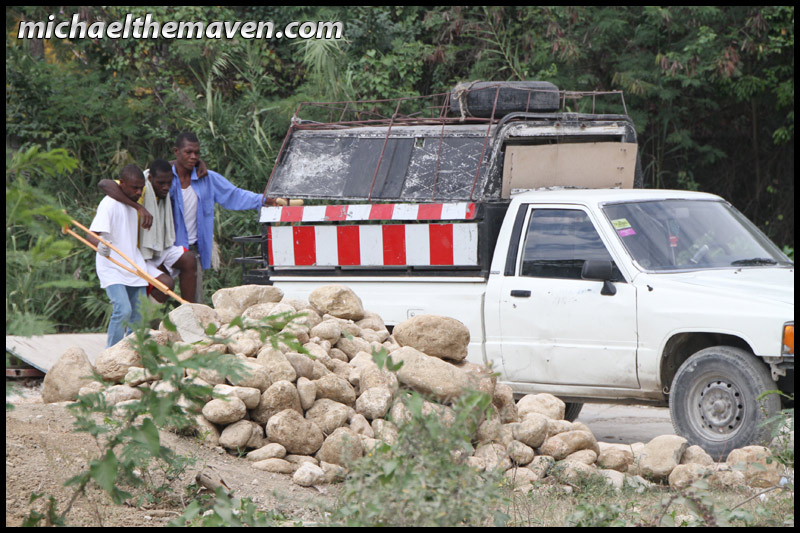 Once inside this compound, I started getting a really good understanding of what is going on in Haiti in terms of Orphanages. There were many very nice, professionally made buildings. Storage units, Tents, stocks of medical supplies. Very well dressed, and very clean director. In speaking with him, we found out the compound was in fact a church/orphanage, but there were only 9 boys in the orphanage, and there appeared to be more adults there than were children. Technically, yes an orphanage, however not many mouths to feed.

We asked the man if he had received any aid he said "very little, we need more". Another lesson learned, pretty much all the orphanages we spoke to would say they needed supplies, even if they had supplies. There is an unspoken understanding that if aid workers show up and you say you need help, there is a good chance it will come. Even if an Orphanage had plenty of food and supplies, the prospect of getting more meant the possibility to sell for $$$.

Just about every single orphanage we visited insisted on needed some type of help (and compared to American standards, they absolutely did), however, the degree of their needs differed greatly. Mathieu could naturally see this and sometimes we argued about how much aid to give them. "They are rich...they don't need us" he would sometimes say, other times "We really need to get these people some help" and it took me a while to see what he was talking about, but eventually I just took his word for it.

I think as a naive American who just wanted to help, I just assumed that we should try to help everyone. As time went on, Mathieu taught me the truth about Haitian Orphanages "Some of them really need help and are run by good people. On the other hand, some of these orphanages are run strictly for the sake of profit. The adults may not be able to find work, or are lazy, so they start an orphanage and know that aid groups will supply food and money. Some of them are involved in child trafficking. We have to be really careful to focus on the ones that have good intentions with their children."

One of the ways we started doing this was to look carefully at the person running the orphanage in comparison with the children. If the director was well dressed, heavy set, cleanly manicured, drove a nice car and the children were in rough shape, it meant most of the aid would end up in their pockets instead of the children's stomachs. If the director was living in the same facilities as the children (a tent for example) was skinny, and poorly dressed (as were the children) it was usually a pretty good indication they were in greater need as a whole. There was one orphanage director who wouldn't speak to Mathieu because he was a black Haitian American and only wanted to speak with me because I was a white American...the crazy thing was...the director was a black Haitian too! Stuff like that just ticked both of us off because it was an indication they were doing fine and were overly concerned about non-essential things (like eating).

In any event, we asked the director "Where are the 500 orphans in the field?" And shockingly, he answered: "Oh...they are just up the road, within walking distance."

So up we walked....and there they were. There wasn't 500, there were 200, and yes, they were just sitting under a tarp in an open field. There were a few adults there getting ready to cook. We could see their dirty bed mats, and their cooking utensils in an open pit, which meant they were really hurting. I took several pictures including their collapsed building and many of the children, some clearly malnourished. 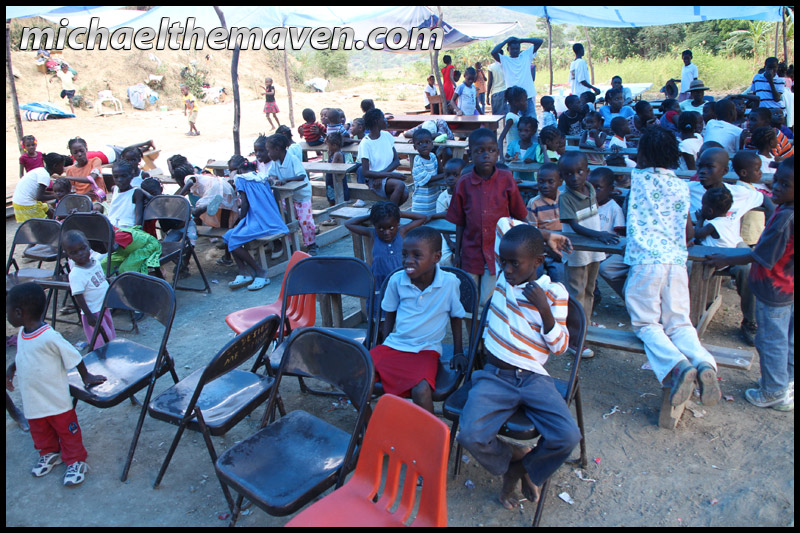 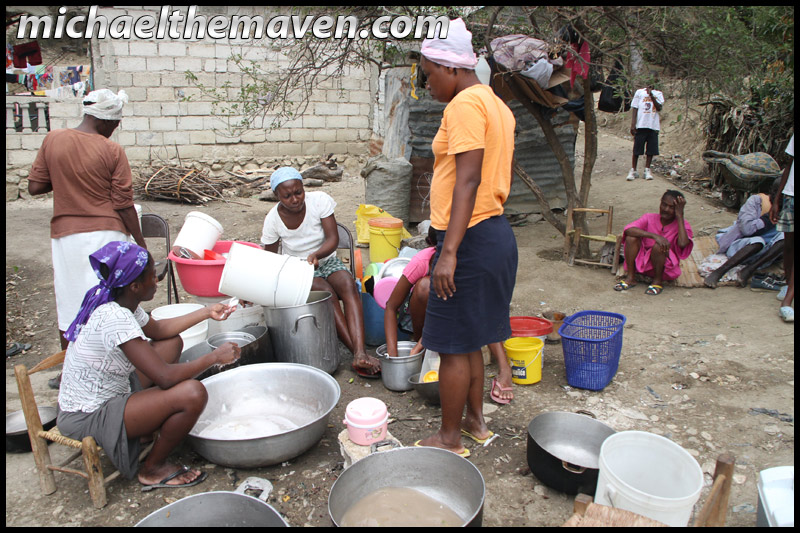 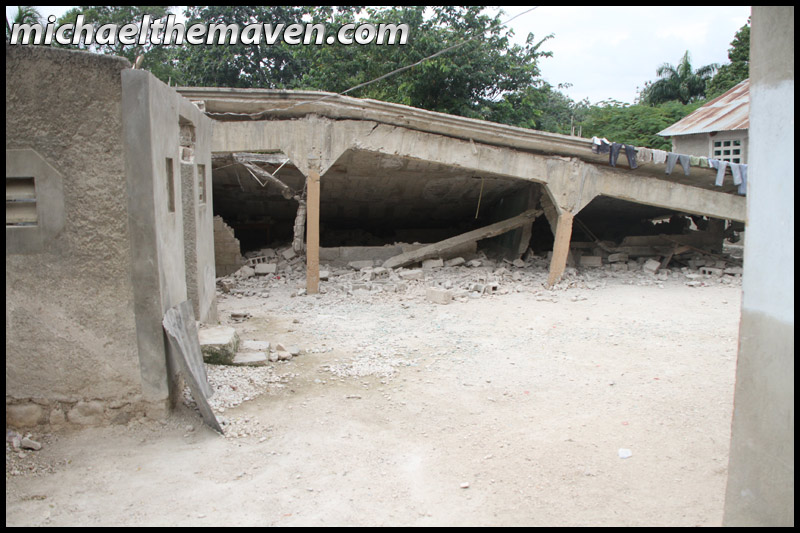 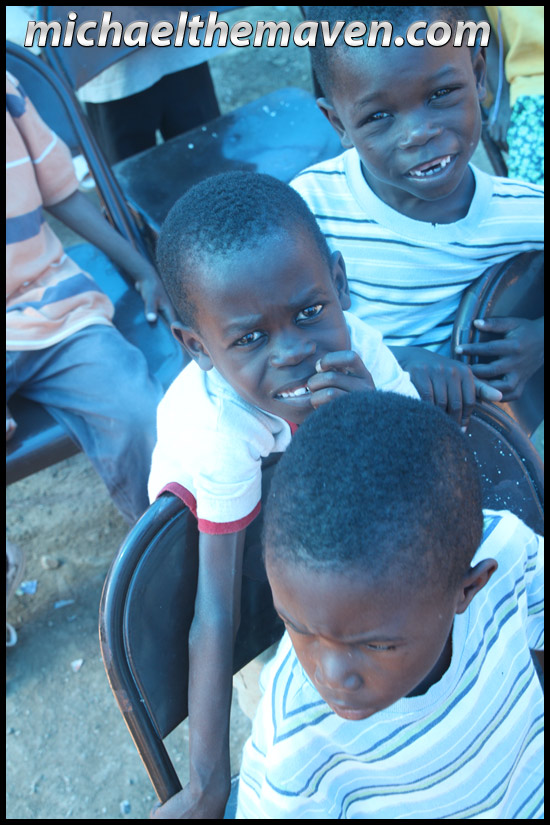 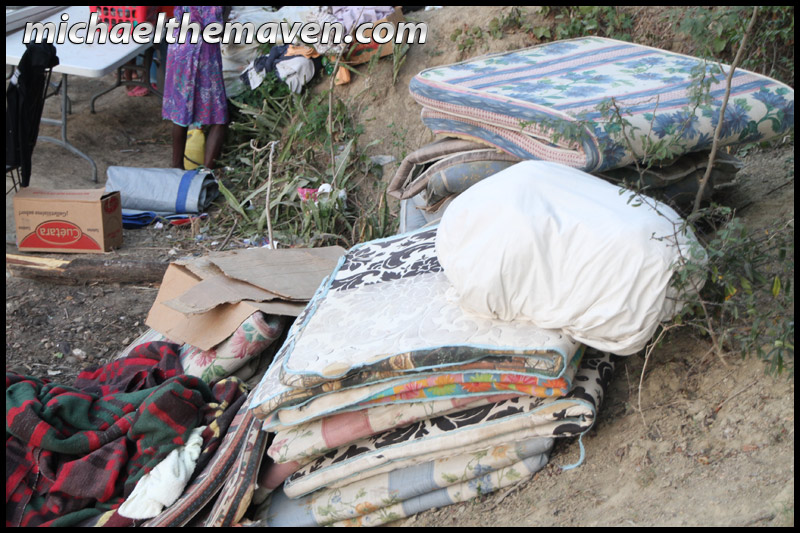 "These people need help as soon as possible" Mathieu remarked.

Now that we had found them came the next problem....Where in the world were we going to find food to give them? How in the world would we get it there? Up to this point we had only been collecting information, now we had a situation where we had to do something....(to be continued)