What is a "Disaster Tourist"? 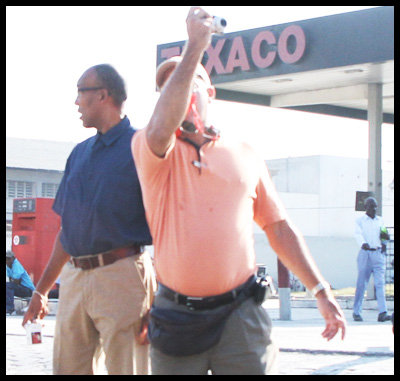 âThatâs exactly what we call them tooâ A Salvation Army Team Leader told me. âThey come with the intentions of delivering aid or helping, when in actuality, they have no real skills or assets they can provide, and become liabilities because they cannot provide for or support themselves. They end up slowing down the aid effort.â

That explained why the Salvation Army initially asked us to leave. I was later told by another Salvation Army leader that the only reason they decided to help Mathieu and I was: ââ¦because you were very stubborn and we could see you meant business.â

Mathieu and I saw this âdisaster tourismâ phenomena several times. As crazy as it sounds, this is an absolutely real thingâ¦ these individuals become sensationalized by the media about a disaster and feel the urge to visit and become personally acquainted with the location, although they go thinking they will help.

The first place we saw it was in the Dominican Republic, there was a Chinese Reporter going to PAPâ¦.ALONE. She couldnât have been taller than 5â0â and was dressed like someone going on a vacation. She didnât have a place to stay, no food, she didn't have a crew with her or even an idea how she was going to get out of the country. She planned on staying 2 days.

Rick even mentioned that he saw some women wearing high heels wanting to go to PAP. While that may not seem like a big deal to most blog readers, there just wasnât a place for high heels in Haiti a week after the quake.

There is not a clear cut way to define who a âdisaster touristâ is. We spoke with a Hospital Administrator who was furious over the fact that all of the American doctors who came didnât bring any of their own food, and were eating the hospitalâs supply, which was meant for patients. Were they âdisaster touristsâ? I would say no, because they were supplying critical skills to the hospital in a big way.

Why I am taking the time to make this post?

1. They are liabilities to others. (This includes becoming victims themselves)
2. They are non-self sustaining. (They do not have their own food, shelter, money or means or a plan to take care of themselves)
3. They have limited skill sets, resources, plans, information, and means to actually help.
4. They usually have an exceptionally short period of stay (typically 1-3 days max).
5. Feel drawn to visit specific locations sensationalized by the media.
6. Photograph themselves in front of disaster locations and smile.

If you Google "Disaster Tourist" you will see that it is a well documented phenomena: