Matthew, wrapped up in the tent tarp.... 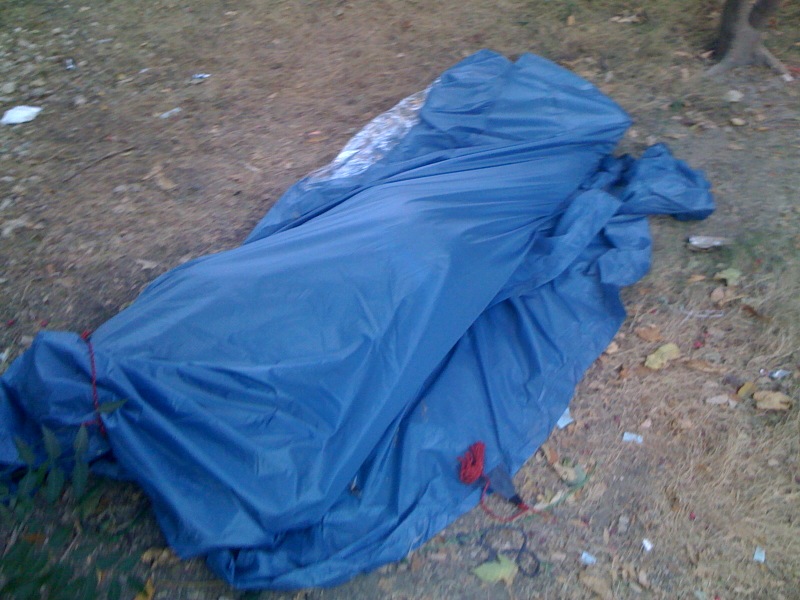 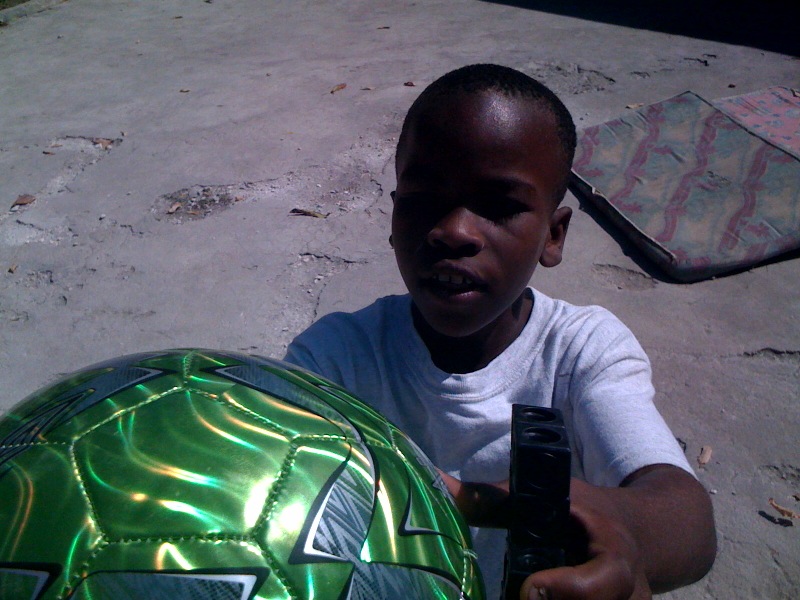 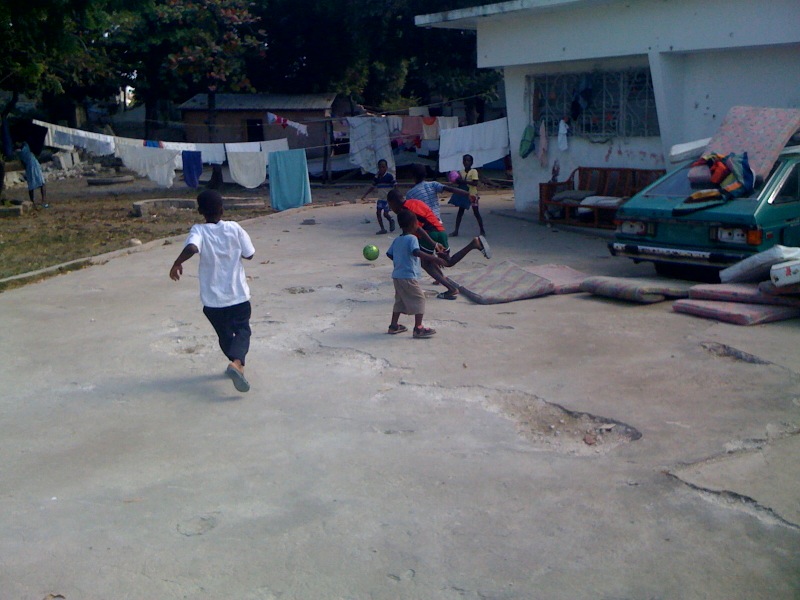 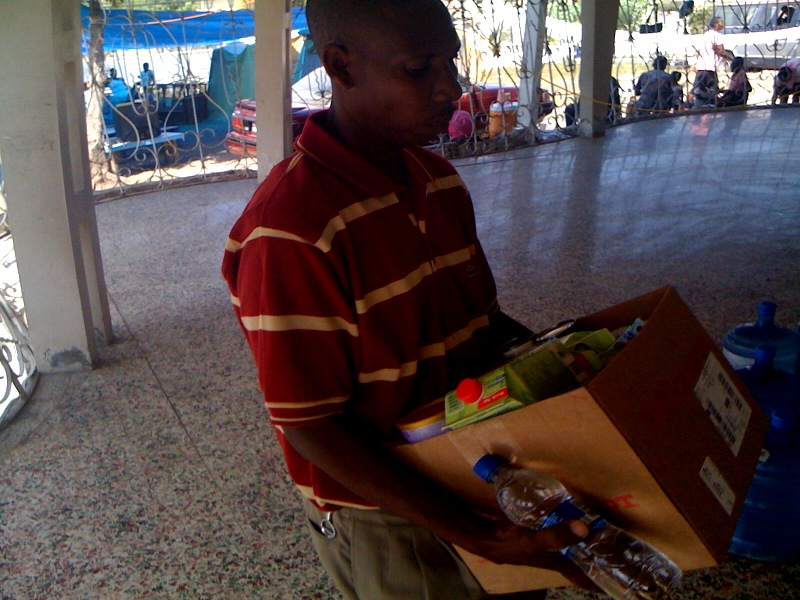 Last night when I crashed Matthew wasn't there. Sometimes he goes and
hangs out with some locals at the SA camp playing dominoes. I woke up
at 12 and he still hadn't come in. Same thing at 3:30 a.m., which was not
a good sign. When I was shaken awake at 6:30 a.m. and he had still not shown up,
I was really worried. I quickly got dressed and went over to the less secure part
of the SA refugee camp to look for him, we had been sleeping over
there until just yesterday when some of the doctors invited us over. I
found Matthew wrapped up in a tent cover sleeping on the ground,
apparently he had been locked out from the other side and couldn't get
in. "Drop me in the jungle and I'll survive."- The dude is scrappy.

I'm so incredibly tired. I think the last week and a half is finally
catching up with me. I woke up this morning to an aftershock and was
out the door before I realized what was happening. The expectation of
another quake hitting has me coiled up like a spring and it's taking a
toll on me stress wise.

This morning we took Scott (from the team of doctors) to a local
hospital with whom he has been in communication. While he assessed the
hospital we learned they sponsored three orphanages themselves, and
would be willing to distribute food and supplies directly to them.
This makes our job easier than going out and finding each of them
individually. While they did say that they probably do need food, they aren't
hurting as bad as some of the others.

When we got back, we decided to make a food run to one of the
orphanages we found earlier this week that WAS really hurting. Again
we scraped together whatever extra food/supplies from SA, as well as
some of the volunteers here and made the delivery. We were also able
to score them 2 soccer balls, an extremely hot item with the
kids...they went nuts when we gave them to them.

We were supposed to run some food and supplies to the clinic in
Casale, but the medical supplies never came. While waiting, Matthew went to grab us
lunch and spend some time with his family while I started working on my connections
and resources for Leogane.

The Canadian Navy contact is looking better and better. They have a
lot of man power, but no supplies, so I spoke with the SA leadership
here who gave me the green light to get some food allocated to the
Canadians. This has to be done through the SA logistics officer, who
was gone all day at a food distribution in City Solei, but it looks
like this is going to happen. Shelter Box has also expressed an
interest in supplying the Canadians so that they can distribute in Leogane, so if I
continue to communicate with all three of these entities, I think we
can build a pipeline distribution system for that region.

I'm working with the Canadian Commander to get a larger transport, and
finalize a supplier- if we can get them all hooked up and working
together, it would be huge. They will manage distributions for the
orphanages as well as others in need there.

The commander has personally invited me to return tomorrow to take him
to the orphanages we found, and finalize our plans. They have a lot of
man power, A LOT, so in terms of getting aid to Leogane, we need to
hook these guys up with suppliers. It will feed about 200 in the
orphanages, but I see it growing to feed several thousands of others
in the area. I might try the Mormon Church again but I've already
struck out twice with them.

Our goal is to deliver something everyday to someone who needs it, and
so far we are giving things out faster than we get them- it feels
good- and still...there are no security problems. Salvation Army has
been treating us awesome and now even refer to us as their "orphanage
rescue program". They treat us as equals and have just been so
wonderful to work with the last few days. I handed one of them a request
sheet from the Casale Clinic - man, they went right to work on getting
it lined up.

I had a free hour in the late afternoon to wash some of my clothes in
a bucket- they were filthy beyond description. Somehow...Matthews
clothes look fine...I don't get it.

PS - Every time I have delivered food or supplies the care takers have
expressed a tremendous amount of gratitude. The last 2 deliveries,
they hugged me. If you guys know of anyway to get me more product, I
will find a way to get it to the right orphanages who are hurting the
most. I'm glad SA has stepped up so much but I'm a little sad we still
haven't found a fully backed partner like UNICEF. This would allow us to just turn
the info over to them and let them run with it. In the mean time, Matthew
and I will do what we can to deliver supplies...it just shouldn't be
like this. I think a lot of organizations don't take us seriously, but
some, like SA and the Canadian Navy do. I have faith that if we just
continue to plug away, doors will open and we can make bigger and
better things happen.