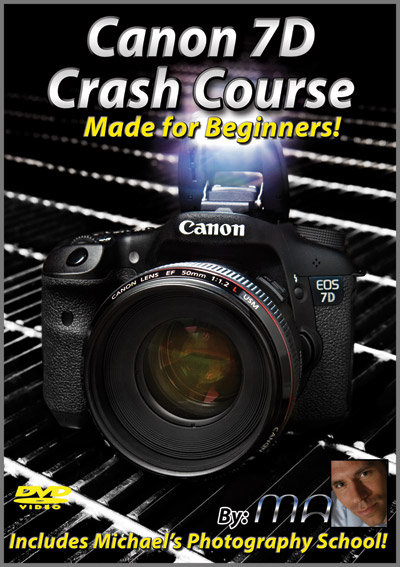 Well..I finished it late tonight...Wow...I just looked at the clock and its 4:48am. I lose track of time when I am in production mode. Its crazy, the last 2 or 3 weeks of a production I get into this vibe of super focus because I think I am going to finish that day, and I don't and then it goes on for a another week or 2. Its very stressful, making sure I have all the information that I wanted to include, making sure that it is clear and easy to understand, making sure there are no mistakes, etc. I typically do not feel relief until 2-3 weeks after I am done, but because the T1i DVD and the 7D DVD were done so close to each other, I haven't been able to unwind in pretty much 4 months. Still need to review it a few more times, but it will go out on Monday and then we will play the waiting game with the disk manufacturers, with Christmas and New Years, I am expecting it to be shipping somewhere between the 2nd and 3rd week of Jan 2010.

The 7D Crash Course is by far the best DVD I've made for a camera...simply PACKED with lots of great info. Many of the usual lessons had to be completely redone, like the focusing systems, transmitter, menu and video sections, etc. The DVD is close to 4 hours long...such an awesome value. Words cannot describe how bad I wish I had these videos when I was learning, especially the Photoshop Crash Course. I don't sell many of those and in my opinion, it is still the best overall tutorial DVD Ive made, simply because I'm cramming 10 years of information into 6.5 hours. If for whatever reason I had to do the Photoshop DVD ALL over again...I wouldn't, it was just too much work. I probably wont even do an update until CS6 comes out in 2 years- its THAT good.

I'm not going to go back into video production mode until after the Holidays, though I will be working on the The Top Secret Product, which has gone through several Beta Testers now. We are adding a few more features, so its release will be delayed, Im projecting until late Jan. I will say this, it is always extremely important to have others look at your work, especially on long drawn out projects. When you look at something over and over, everyday for months you lose that sense of fresh eyes to find things you wouldn't have seen because you are so familiar with it. We have had some really great feedback so far, and many awesome suggestions.

I really can't wait to show you guys what it is, simply because it is a game-changer in the photography world, but that's why this is being kept so secret. I would much rather come out and say: "BAM- here it is and you can purchase it right now" instead of "I have this idea I am working on..." and all of a sudden I just made 3-5 competitors. If the product is done, polished, effective and inexpensive, I doubt anyone would be interested investing so much time, money and energy into something that already serves its purpose.

Here is a little hint: If you are a photographer, it will allow you to do your work better, faster and more efficiently than you do now, and to the best of my knowledge, NO ONE has thought of it yet. One of the testers called it "As wonderfully useful as it is simple. I think many photographers will be asking why they didn't think of it themselves"

Another hint is I will have to go out and shoot a series of training videos demonstrating how to use it, just in case its too hard to figure out (all testers were able to figure out 85% or more of its features without any help). It will even have its own page in the forum to discuss how to "customize it" because it is extremely flexible to personal preferences and modifications.