All right, here we go- Tonight after attending a local photographer's club (which I decided to attend just to help out BTW) - I was given a ticket for taking a picture. This is the image, the "Officer" (aka Security Gaurd) approached US (as in there was me and another photorgapher) about 1-2 minutes after this picture was taken. While this picture may appear to be quite incriminating, Im sitting in a public cross walk between 2 parking lots, which mean the signs behind me can only mean one thing, cars and people are not allowed past those signs. Read more below.... 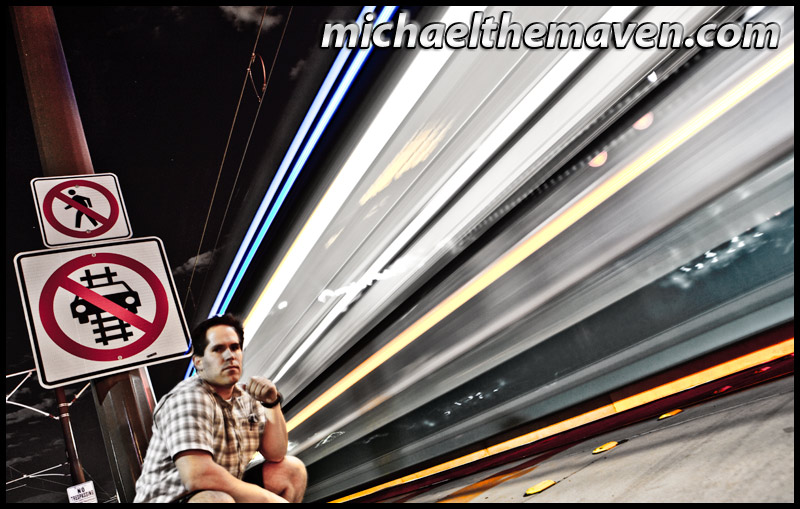 Here is a different perspective on where I am sitting, without Paintballer Pro (Newspaper) applied of course! 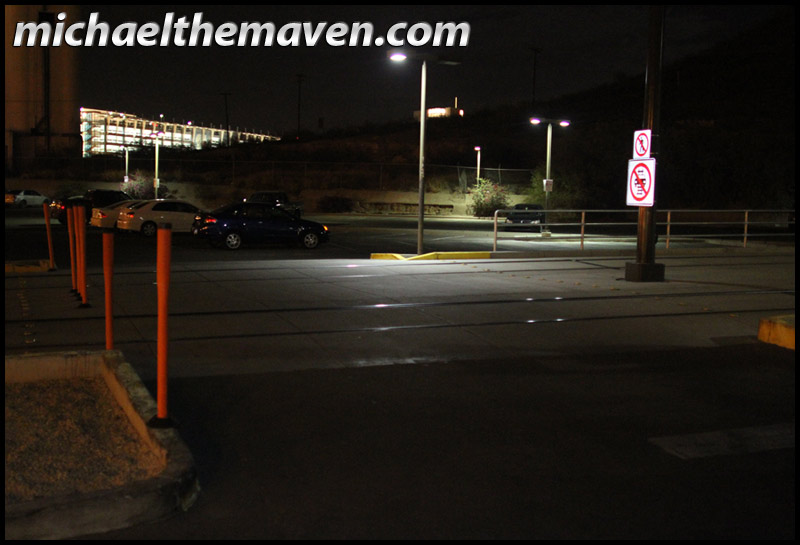 As you can see, this is clearly a public access road meant for both cars and pedestrians to cross over, so I figured the signs could only mean one thing, no cars or people were allowed past those points (the signs). Not so...as soon as I got done taking that picture, this little Security Guard starts yelling at me and another photographer who I was with. We weren't interfering with the rails, we weren't even close, we were just sitting there taking pictures.

Now before I start with this story, I would like to mention this: I have had many, MANY run ins with âlaw enforcement for hireâ employees, meaning NOT ACTUAL POLICE. Itâs always security guards, park rangers (yes, you read this right), ushers (also true), or otherwise private citizens that donât know what the heck they are talking about. Now there are obviously some rules which I will link to on the bottom below, but the general rule is, if you are in public and you are not taking a picture of someone who has a âreasonable expectation of privacyâ, a sensitive government building (such as a nuclear reactor) and in some cases government officials, you are good.

So little ego-maniac comes running up yelling: "You are both guilty of criminal trespassing!"

Iâm like: "How in the world are we trespassing? We are taking pictures.â (I seriously thought this guy was kidding at first)

âThe rail system is private property, and by entering or even crossing the rails you are in violation of trespassing. I will need to see some identification.â

So me, trying to co-operate and be cool about it, pull out my wallet and I give it to him. In the past, I have learned that if you give the person as little friction as possible for something like this, they will usually let you go with a warning. Not so tonight...lol. (Its still usually true). I think if I was to do it all over again, I would say nothing until actual cops showed up.

The photographer I was with, whose name and identity which has seemed to have escaped my recollection at this writing responds with âI donât have any ID with me.â

Totalitarian-Should-Have-Played-Worf-On-Star Trek-But-is-only 5â2 responds: âWell then thatâs double for you, you are going to get a ticket for criminal trespassing, and Iâm going to have the police come over here who will cite you for failing to carry proper identification.â (WTF ?!?- BTW there is no law requiring you to carry identification, to drive yes, but to be walking around in public- no)

Then my-good-photographer-friend-I-mean-associate-that-I-âjust metâ responds with a very co-operative âWell, I have it in my car, can I go get it?" As we were standing in a parking lot surrounded by cars.

Hitler-Lucifer-Hybrid-Child: âYes you may.â As he is furiously typing my information into his over the shoulder mounted ticket meter computer. Look Out and Beware!! Justice is being served!

About 3 minutes later, a little Jeep pulls up and 3 more Security Guards get out. They insist that it was indeed criminal trespassing and anyone and everyone who enters the cross-walk could be technically ticketed and the reason I was being ticketed was because: get this âYou were taking a picture.â Thatâs great logic. Even while we were standing there several cars and pedestrians continued to walk across this space and when I asked him why they werenât being ticketed, he responded with âI can only do one thing at a time.â Lol!!

I tried many times to explain to him how the signs were clearly laid and they could only mean beyond those points, not the cross-walk, even as people and cars were crossing right then and there and he would just cut me off and start yelling âTell it to the judge!!"

After Officer Morales, of the âEast Valley (Mickey Mouse) Metro Security finishes with my ID, he refuses to give it back. I asked him twice for it and he refused to give it to me. At this point, I am getting agitated, I felt like I was being harassed for something purely innocent, he was just standing there with his 3 buddies, waitingâ¦.yesâ¦waitingâ¦for my associate to return. Iâve learned a lesson from this and hope you do too:

NEVER GIVE YOUR ID TO A SECURITY GUARD

Either tell them you donât have one or ask them to call the police, but never turn your information and especially your property over to someone who is not a legit COP. Also, police know they cannot confiscate your camera or ask you to delete your images without a warrant, security officers do not know this. Cops for the most part wont go through the trouble of giving a photographer a ticket, Security Guards will.

So after standing there for about 10 minutes, it starts to sink into genius boyâ¦.that my associateâ¦.wasnât returning anytime soon. It seems that while he was ticketing (yelling at) me he didnât pay attention that she walked right out the other side of the parking lot and at that pointâ¦.RAN AWAY, I mean, thatâs my guess, not that I would know anything about that specifically, its not like she told me later or anything.

Then, the 4 security guards fan out looking all over the parking lot looking for the Ninja Like woman who escaped their Law Crusade! (He still had my ID). At this point (which is about 20 minutes after the guy initially stopped us) he realizes that heâs been had, and they start to ask me:

Me: âUmmmmâ¦.I think she said she was going to her car to get her id, but to be honest with you I suddenly I cant remember much about her at all.â (Yes, Michael The Maven will absolutely take one for the team). They gave up after that.

He gives me the ticket, $70, not for criminal trespassing but for âentering, occupying and remaining on the rail guide way without a valid permitâ.

I finally asked him âLet me get this straightâ¦Iâm a professional photographer, came out to help some students tonight at a workshop, have my ID, give it to you, co-operate, donât leaveâ¦.Iâm the one getting the ticket?â

âAnd if I was 10 feet on the other side of the track, no ticketâ

IF YOU ARE TAKING PICTURES OF TRAINS OR TRAMS, DOING IT FROM THE OUTSIDE LOOKING IN IS OK, DOING IT FROM BETWEEN THEM LOOKING OUT IS NOT (Guess we learn something new everyday! And yes, We are talking about a Tram that has a top speed of 10 mph.)

âWow, I'm so impressedâ¦you are really good at your job.â So as I am leaving, I decide to take some pictures for evidence to prove my point to you my beloved reader. Lesson three: If you have a camera:

Wear it around your neck, they will never know you are recording. After the fact, I canât tell you how bad I wish I would have reached down and pressed video record on my 5Dii during this whole event just so you could see what an absolute moron this guy was.

At this point, 2 managers from the hotel which owned the property walked out and talked with the Security A-Team. Then they come over and start asking me questions:

âWho are you and what are you doing here?â and so on and so on. At this point I had enough âAre you asking me to leave?â They answer âNo we arenâtâ Me,âOk, then, well I guess Iâm done talking to you. Iâm taking pictures. You are welcome to watch me, being such the criminal I am.â And they didâ¦for at least 5 more minutes. Reallyâ¦do people not have better things to do with their time? As ridiculous as this all sounds, its all true.

So what this is all coming down to is this:

You have a right to take pictures, especially in public places. There are always going to be security guards and people who do not know the law who will challenge you. It is your first amendment right to express your freedom of speech, donât back down from it. If you are on private property and are asked to leave, just leave.

The final ticket I was given was for being between tracks, so I might be able to see where they are coming from, but for criminal trespassing? No. I donât even think that âentering/occupyingâ the area would stick due to the nature of this cross-walkâ¦ it is possible âremainingâ would as I had a tripod set up. Still, considering all the crime that goes on in downtown Tempe, this is about as extremely lame and stupid reason to give someone a ticket.

As a final note, I want to let you in on how my brain works when it comes to high stress negative experiences like this:

Thatâs rightâ¦.and this is why: It would be far too expensive in both time and money to challenge it. Pay the $70, and never think about it again. I want my mind clean and clear so I can focus on the task at hand: Video Production, Product Development and moving to MAUI as soon as the 7D DVD shoot wraps here. I donât have time to think about how some 5â2â dude, who probably has the worst job in the world tried to get under my skin.

Itâs a Chess Game, I didnât even lose a pawn here, someone bumped the table- no sense in losing focus over it. If this was an attack on my character, or my rights had been violated, different situationâ¦.Iâm always ok with letting things go and rolling with the punches. Do I feel wronged? Absolutely freaking YES, is it worth pissing me off more thinking about itâ¦.absolutely noâ¦I have too many things on my plate to allow this to tick me off.

Iâve learned from this experience, and most importantly, I have FINALLY gotten a ticket for the sake of photography and for some reasonâ¦.this makes me feel really good! :)
Great PDF Article on Photographers Rights