I scouted out the Lincoln Memorial Steps as a good location earlier in the day. We returned about 3 hours before the fireworks and another photographer told me they were kicking off photographers with tripods on the steps. I wasnt sure if this was true or not, but he was clearly peeved, so it was probably true. I decided not to bust out the tripod until after the fireworks actually started, by then all eyes would be on the sky. I also planned to not open it taller than 2.5 feet as to not attract attention. Made friends with the family in front of us and they co-operated with the positioning of their children for optimal shooting. (I was shooting over the kids' heads as they were shorter).

It was unreal how many people saw the 1' x 1' open space in front of me and tried to sit exactly on that spot. We had to fight tooth and nail to prevent this from happening, and turned away at least 5 groups who were trying to claim it. "I have kids coming" which is technically true, just probably not for a few more years.

The place was ridiculously packed. It took about 2 hours to get on the metro after. I think this proves it was worth it! Im convinced that f11 & ISO 200 was money, shutter speeds varied greatly. Ill be posting tips on some of the techniques I used.

More Coming! Hope you guys dont get bored with these :) This one below was a close second to being my favorite (the first is my fav). Hard to believe this is real, but yes, the explosions were happening right above the water there, so the Washingtom Monument makes a great backdrop. I knew that if I wanted this effect I would have to shoot from near the top of the Lincoln Memorial. My dream location would be over Lincolns shoulder, as if he is watching, but this probably isnt going to happen anytime soon. :) Take a close up look at base of the Washington Monument below. All those white dots, are camera flashes firing, which absolutely helps in no way whatsoever with firework photography. :) The bluish dots in the foreground again are camera LCDs. 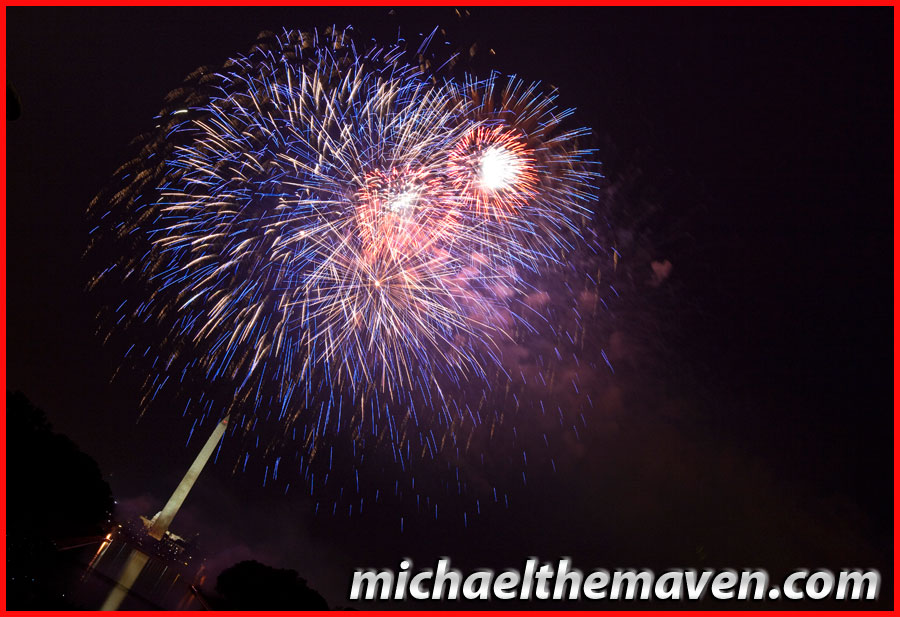 There are only so many you can take without them starting to look the same. If you look on the green shot above, you should see some hints as to what is going on here. The video should explain it in the 2nd, "advanced" part. Very good stuff. Will try to have it up as soon as possible.