On the way up I listened to the BYU vs. Washington game on the radio, which if you follow college sports has stirred an uproar over a controversial ref call with 2 seconds left when Jake Locker threw the football up in the air and Washington was given a 15 yard penalty for the PAT. Here is the video if you missed it:


On the ensuing PAT, BYU easily blocked it and ended up winning 28-27. 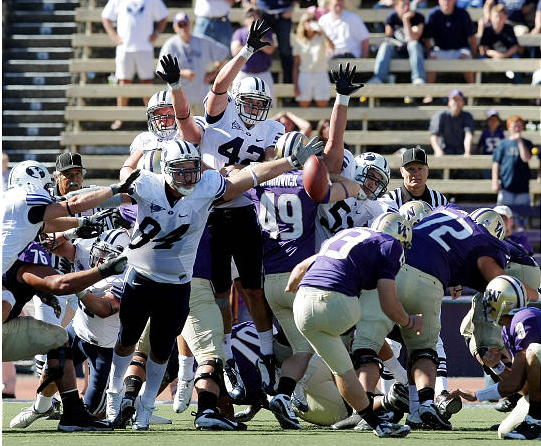 First- We had a saying when I played, there is no such thing as "shoulda, woulda, coulda". What happens, happens, shake it off and get your head back in the game. Its pointless to think about what "could have been" and I can say this because Ive been on the receiving end of such situations many a time.

Secondly, from what I understood, these refs were awful, and there were several plays, not just this which could have also affected the outcome of the game, such as the 4th and 10 a few plays earlier when Washington held one of BYU's linemen allowing Locker to get a first down...Thats just one example- the commentators were shocked at how bad the refs were, but my point is this, if everyone feels they ABSOLUTELY must argue or get so upset about one bad call, then ALL the bad calls need to be addressed. It is absolutely pointless to argue one bad call just because it happened at the end of the game with 2 seconds left.

Thirdly, BYU still had to block the kick, which they did and credit is due. The way this whole thing is being argued is that the ref's call actually blocked the kick, which it didn't. It also assumes that because of the penalty, the kick was now impossible to make. A mere 15 yards longer than a regular PAT. Most college teams routinely kick field goals this distance. A 35 yard attempt isnt "that" hard. Even Willingham (the coach of Washington) said that it was still their job to prevent the block which, they didnt.

Fourthly, everyone seems to forget the fact that BYU has been victim to many of these same types of calls and they don't whine like babies. Two years ago a Pac-10 officiating crew took away a touchdown from BYU because a receiver pushed off, which on review he clearly didn't. BYU took it in stride, played the game, but still ended up losing by just a few points.

Finally, the person who said it best was Jake Locker "refs never decide the outcome of the game" which means there was lots of other things going on that led up to that point, sure refs can affect penalties and positions, but the burden of proof always rests on the shoulders of the players.

I think Jake Locker is an amazing athlete and competitor and it was a sad way to end a great game, however, the refs made a call they were supposed to, not that he celebrated, but that he threw the "ball high into the air". Nothing was wrong with him being excited or jumping up and down with his teammates, there is a specific penalty for what he did, I still cant figure out why most commentators cannot see this. If a BYU player did it, I would fully expect for him to be flagged as well.

Rules shouldn't change because the score is close and there are only a few seconds left. And even still, that call was not why BYU won, BYU won because they blocked a kick, which if you watch a lot of college football, you know its quite difficult to block a field goal/ PAT attempt.