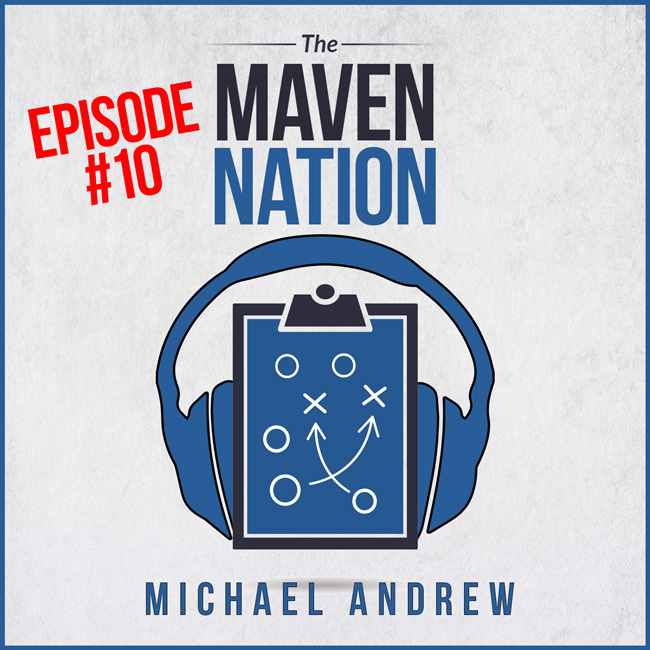 Good morning everybody! Michael the Maven here. Today is July 21st 2017, which means tomorrow, we are launching The Efficiency Playbook. We are going to have a few special episodes. typically, we are going to go Monday, Wednesday, Friday. We are going to go through the weekend and even through next Monday and Tuesday, five days in a row, simply because we want to make sure you get your opportunity to download The Efficiency Playbook. The Kindle version is going to be given away barring any technical difficulties starting tomorrow from the 22nd through the 27th. Go to my blog michaelthemaven.com, sign up, and we will send you the link as soon as it is available. If there is a problem, this is something I can only do once in 3 months according to Amazon's rules. I want to make you guys get your chance for a free copy.

Today, we are going to be talking about something very interesting, something I didn't really know the name for but I realized as a teenager was that when I was emotionally invested or financially invested into something, it clouded my judgment. This is common for everybody. When you have invested time, money or emotion, it is harder for you to make an objective decision. This is something I want to make you aware of. It will give you the advantage to take this wrapper off of your mind so to speak. I noticed that originally, when dating as a teenager, my brother Aaron and I, we have figured out that if I was dating somebody, Aaron would have better advice for me on how to deal with her because my judgment was clouded. When he was dating somebody, he would come to me and give me certain situations and I could get him answers immediately that he couldn't see because he was emotionally invested.

Later on in life, I saw these with the companies I have consulted with. They would have a problem and when advice is given to them about an external resource, they were resistant to it. They didn't want to accept it because it came from another place. Even now, when I consult for my own business, I have certain friends that I go to because I know they are not emotionally or financially invested. They can see the situation more clearly. This is the phenomenon that I've been wondering. Programmers are great examples. Sometimes I hire or fire programmers so I have some code, I give these codes to other programmers and they will say "That is not our code! We can't work on that, we didn't make that!" There is always been this phenomenon. I've seen this resistance to ideas that did not originate with you. Things that are not familiar, we are automatically a little bit resistant to them. This also ties into the investment part of clouding out judgment.

I am reading this great book right now called The Universal Principles of Design. It is a great book. It is a summary of designed principles from different sources. Wow! Just an incredible book! This phenomenon is called "Not Invented Here!" Robert Claggett, an MIT student in 1967, is the one who is credited with a form of a definition of Not Invented Here and per that he wrote called The Receptivity to Innovation. The idea is basically when you are dealing with a new idea. Technology, language or product that is coming from an external source, there is going to be this psychological bias against it even if it is superior to what you are currently using. I have seen this so many times. The problem with this is... it is limiting our options. If you read the Efficiency Playbook, there is Chapter 11 called Spyglass. It talks about using other people's solutions to fix your problems. There is a tendency to believe that everything that originates with us is the best. But this is not the case. Chances are if you have a problem, somebody out there has already solved it. The chances of that are very good. They're great!

Not Invented here results to something that is sometimes referred to as Reinventing the Wheel Syndrome. If you have a problem, you believe that you need to create a brand new solution, you need to be the inventor of it. Statistically the chances of this, you being the original problem solver, is already been done most of the time.

That's not to say that all foreign ideas and solutions are superior simply because it's unfamiliar. You have a bias against the fact that sometimes that it is. So the question then becomes How can you tell that a tech or an idea is superior to your own. Give me the answer right now. If you see somebody who is solving your problem and they are excelling at it 2or 3 times or more, being more productive or more successful or better results, it's time to look at what they're doing and how they're doing it.

I talked about this in the book. I am not talking about forgerizing or copycating. I'm talking about using free ideas, free solutions that already exist to solve your problem. Here is the takeaway... this is why this is going to be so important. Using unfamiliar things can be a huge advantage because it is going to increase the rate and the speed of your ability to adapt versus trying to invent it on your own.

In closing, let me give you a fun story. We played with the University of Washington in 3 years. A sophomore year, we lost. A Junior year, we lost. A senior year, we lost. i was 3 years in a row. I graduated. The last game that we played in was against Tulane in 1998. They had a perfect season, that was that and I graduated and we lost great right? The BYU coaches spent time with the Tulane coaches, this is their enemy, their competition, learning their offense.
Then BYU incorporates it into their own offense and so when BYU plays Washington in 1999, the next year, Washington was unfamiliar with the new BYU offense. The twists that BYU had put in, BYU beat Washington for that fourth year in a row we played.

So keep that in mind... unfamiliarity can be a great advantage if you are receptive to it. Be open minded with foreign ideas. Don't be afraid to consult with people who are not emotionally or financially connected to what problem you are currently trying to solve.

In any event, the Efficiency Playbook is going to become available tomorrow. Definitely, check it out! Get a free Kindle copy. Thank you guys so much for joining and listening. I really appreciate you and I'll talk to you next time.