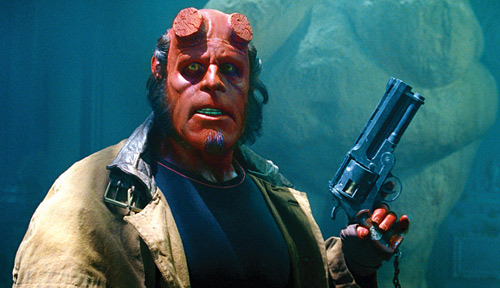 I must admit, the first time I heard about Hellboy I thought it was about something evil, which really kind of turned me off. I guess a lot of people had the same reaction to Harry Potter as a Wizard or the Da Vinici Code as being blasphemous. If you have such feelings about any of these movies, then you probably wont like Hellboy 2.

Ive really grown to like Hellboy, who was born as a "gulp" demon and nearly fell into the hands of the Nazi's who wanted to use him as a weapon, but....he was rescued by the US Army and paranormal researchers, and was raised by one of the professors. Hellboy shunned his heritage of evil and constantly grinds his horns down in token of this. (If you missed the First Hellboy, it is a pretty decent movie, rent it!).

I really really like the fact that Hellboy recognizes good from evil, and even though he is genetically programmed to be a demon, he chooses not to and uses his power for good. His character is so tormented with what he IS and what he chooses to be. Its a beautiful thing. Most normal people see him as a freak, but he still remains consistent in doing good.

I thought Hellboy 2 was a fun movie...this is what summer movies are all about. Felt like a cross between Men in Black and Harry Potter. It was better than the Hulk that just came out. Lots of great action and comedy. I would recommend seeing it in theaters, if you can get past the superficial stuff. But if you cant....dont worry, Hellboy is used to people like you. ;)