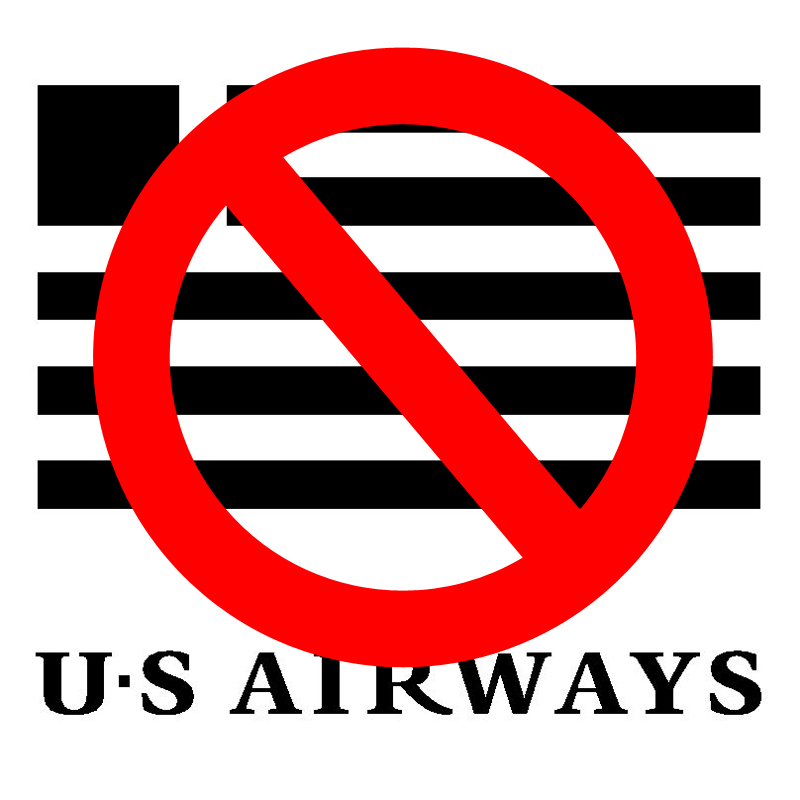 I love the United States. I love Freedom. I freaking LOVE the First Amendment. And you know what else I deeply, truly enjoy? Telling everyone I know about how companies try to screw their customers over and why my friends should never, ever use them again. This is not my first problem with US Airways, and as of today, they are on the very bottom of my list of Airlines to fly with and you should put them there too.

Background: I purchased a ticket on US Airways from Phoenix to Pennsylvania on March 31st for my mold making workshop. I paid premium for a direct flight (4 hours), had upgraded seats, the whole 9 yards. The price was $879 and I paid with Paypal, which is cash to me.

US Airways cancels the flight within an hour, and sends me an email to let me know that they have rebooked me on a different flight. The new one, was routed with a layover through Chicago, and would arrive about 4 hours later to Philly than the previous flight.

The new flight was available for purchase earlier for about $370 less, but there was no mention of this in regards to the amount of money I already paid for the first flight ($879). USAirways basically decided to keep the difference in tickets, despite the much longer route. #shady. It seemed to happen automatically (the rebooking) so I don't see this as a simple mistake, but more of a company policy.

When I was 13 my grandma sent me to the store to buy some milk. When I came home and had kept the change, I was scolded for stealing. I learned a lesson that day; that spare change matters, if there is some left over- give it back to the rightful owner. Same thing here.

$370 may not sound like much, but when this is multiplied by every customer rerouted through that same flight, (the other was nearly sold out, but lets say 200 for guestimation purposes, this amounts to the sweet bonus of $74,000 for USAirways on a single flight. Very high probability this isn't the first time this happened, nor the last, but it makes you wonderâ¦.What is stopping a company from simply saying "This flight is cancelled due to mechanical difficulties and we have rebooked your flight", when really they just wanted to shuffle some customers around onto another flight that has more open seats?. Something to think about.

So, I call to tell them the new flight is unacceptable and ask for a refund, which they say they will begin to process the refund and it will take 7-10 days to show up on my account. Following up 10 calendar days later, I am told it is "7-10 business days" (2+ weeks) and finally today I get this lovely notice today: 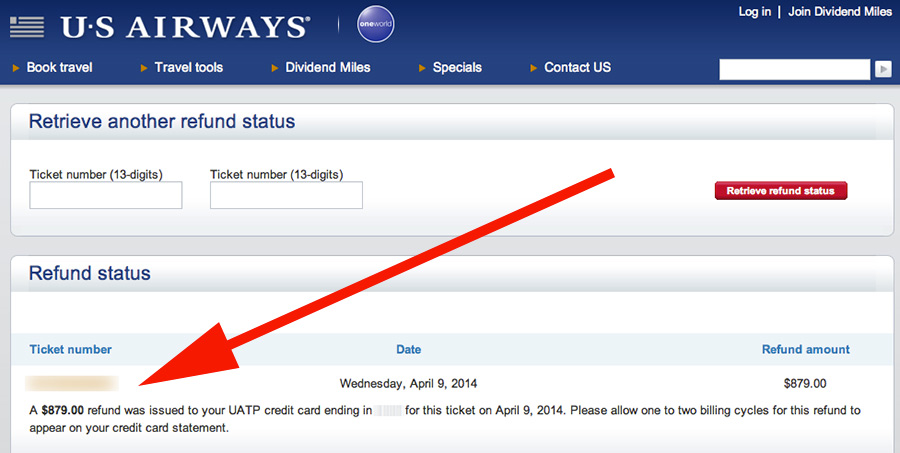 2 Problems hereâ¦why did they wait so long to process it, and 1-2 billing cycles in the credit card world is 1-2 MONTHS. I have to wait up to 2.5 months to get my refund?!? This is insanity.

Further more, US Airways makes if very hard to contact them directly regarding refunds. You cannot email or call their refund center directly? They want you to fax them a request. (Who uses faxes these days??) The only way I was able to reach the refund department was to call reservations and then be transferred. They do have a number for refunds, but it never goes through.

I was finally able to speak with a manager who would only identify himself as "Tim" with the identifier letters "UR" when I asked for his last name). He simply responded that they issued the refund and it was out of their hands. When I explained that I had not received the refund, he suggested me to call Paypal and take it up with them. When I explained to him it wasn't my mistake (for the cancelled flight) and that he shouldn't be dishing responsibility back onto the customer, he said "well that $879 isn't here anymore".

Tim, if the customer hasn't received his money, is it a refund? No, it's called STEALING. Yes, US Airways is stealing from me. Does that sound harsh? Read on...

So I did call Paypal to see if they could straighten it out. When I had originally checked they said to contact the airline (can any reasonably sane person make sense of this misdirection nonsense?)

Lo and Behold, when looking at my account, I realized US Airways also didn't refund my seat up grade and wi-fi purchases:

In fact, they never processed that part of it either. Naughty, naughty US Airways. I can understand a mistake occasionally, but if you try to take advantage of a customer three times in the same transaction, its probably intentional. I say 3 because I still do not have my money.

Most companies are very fast and efficient about taking your money at the point of the sale. It is immediate, but when it comes to refunds, they don't want you to have your money back for as long as humanly possible. I can only speculate as to the reasons why (collecting interest perhaps?) but any company that actually cares about customer service will refund the transaction as fast as they took it in the first place. Any time you find a company that is overly slow to refund, it is a good indication this is policy and intentional, and the company should be avoided at all costs.

US Airways, you are officially #MavenUnapproved.

Bonus- You can read the pathetic exchange I had with them on Twitter:

@USAirways- I am unhappy about this- If you can accept my money instantly & cancel the flight within an hour, the refund should be as quick.