Michael in the Philippine's Update #14: Back in the Saddle

Feeling much, much better today. Still a little tired and weak, but I would say I'm at 85%. Thank you to everyone who wished me well. I don't like being sick here, because there is so much to do and not many volunteers. I hate not being able to get my hands dirty for these beautiful people.

The island we checked out today is called Zummaragra. Learned many important lessons from this experience and need to apply them in the future. Getting access to a helicopter in a disaster situation is essentially the holy grail of assets in disaster aid work, everyone talks about getting them, or how wonderful it would be to get one, no one actually does it. Turns out there is an actual submission process to borrow one through the UN, you just need to know who to talk to and what to do and Craig was able to make it happen as we were worried about 3 different islands and wanted a quick way to assess them. One of the islands was ok, the other had already been adopted by another NGO group, a few kilometers away, apparently had massive damage. No one knew anything about Zummaragra. Craig accessed the right people through the right channels and lined it up.

I have at least 400-500 images on my 5Diii, also got several clips on my iPhone. The video on both the iPhone and 5d3 were shaky, so I decided that full res stills were the way to go.

Surprisingly, there was very little damage on Zummaragra, and while we could see children and adults both signaling us to land, the pilots, who were civilian contractors hired from a tour company didn't believe they had a good place to land. I saw at least 3 places, including a fully paved basketball court. I think any military pilot would have done it, these guys seemed afraid, so we weren't able to land, disappointingly.

While the infrastructure, buildings, power lines, cell towers, fishing boats all looked ok for the most part, we really don't know how much they depend on neighboring islands for food, and if they are not fully self sufficient (growing and catching all their own food) they might be hurting. We are looking into a ferry to the island, but it's a 5 hour trip one way. Zummaragra is also a notorious rebel hideout. At least we took away an interesting experience and have a knowledge of the protocols and contacts to hopefully make it happen again in future disasters if needed. That or maybe it's time to get our own.

After a quick lunch of Ramen noodles we loaded up our trucks and split into 2 teams making 5 deliveries each to "refugee shelters". That term is to be taken with a huge grain of salt, it's essentially a building that has some of its roof intact, there may be anywhere from 1-20 families all staying there, each with very little food. They sure were happy to get what we brought them. Most of the places we went today were just completely out in the boonies, and because there weren't many people out there, some were really hurting.

Craig is leaving tomorrow do we got some good footage of him playing with several of the children.

One of the members from another city called General Santos apparently purchased a van for me to use as long as I am here, so Andoi and I have access to travel anywhere we want, anytime we want instead of needing to bum rides from one of the few church vehicles we have here. He is going to be a new Dad soon, so it looks like I'll be driving this thing for at least a couple days.

The pace doing disaster aid work can be absolutely brutal. I think one of the problems some volunteers is that if they actually get here, they do not know what to do or where to start. I also think that sometimes they get burned out (it is truly stressful & hard work). If you really apply yourself, yes you will still occassionally have some down time, but for the most part, it is flat out go go go, non stop. You may load or unload a truck 2-3 times a day, do a distribution, do a food or gas run, just non-stop. If you are going full speed, I don't think it is humanely possible to consume as many calories as you will burn, simply because if you have enough time to eat that much, you will fall asleep before you can finish such a meal. Come 5am, you better be ready to go again. Day after day, for weeks.

Something I just love about working with Craig, Andre, Demarius, Andoi & the Salvation Army team is we are definitely all on the same page as far as pace and sense of urgency. We all jump in to fill necessary roles depending on what is needed, sometimes without even discussing it. Makes it so much easier to get things done.

When we don't have things going on with SA, Andoi and I focus on helping with the church, it's members and friends (we have made many, many deliveries to non- church members that came from the requests of concerned members). We really try to help everyone we can, as fast as we can, as fair as we can, but between the LDS church and the Salvation Army, we absolutely have a full plate.

My flight from Manila is scheduled on the 12th, but I'm keeping the option open to extend if necessary.

Definitely not seeing the numbers of volunteers we saw in Haiti or Japan, and I can see an impact we are having, extending is definitely a possibility.

We will have a very busy morning tomorrow before taking Craig to the airport. Bob Poff is also coming in with President Aban from Ormoc (Aban has been spending the weekend with his family). Bob Poff is the CEO of the company that is bringing in 75,000 or so meals from the money that we raised together. I'll keep you all updated. 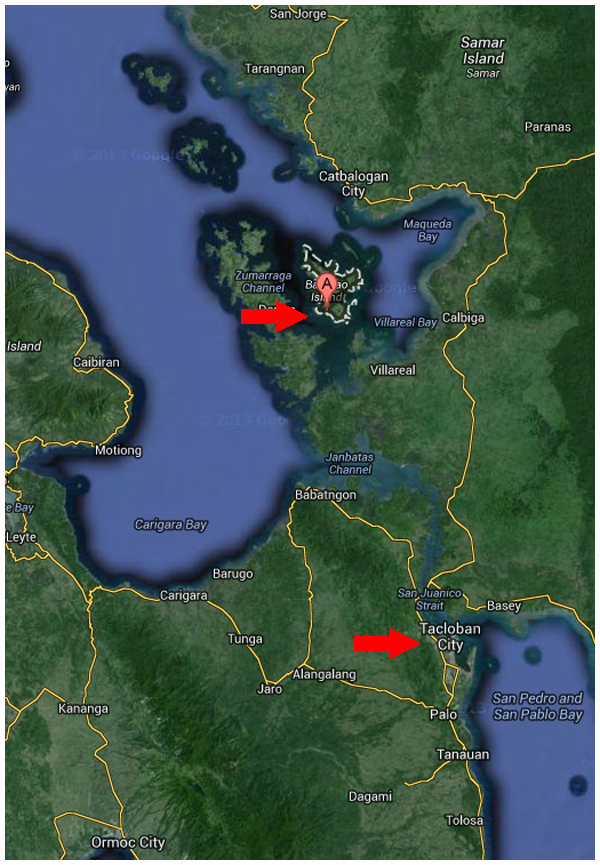 Shows Zummaragra in relation to Tacloban City.
Look at these faces! I just love the philippino children. They are among the sweetest, most gentile, humble children I've met.
This is my dinner, a cup of Ramen noodles. It tasted like heaven after 2 days of white rice. I think I've lost 15 lbs so far. Nothing will make u lose weight like disaster aid work!
I shared some of my ramen with this handsome fellow who was clearly malnourished. Hate seeing so many animals and pets suffering here.