Master of Disguise & Spy Dust (& The Truth about Argo) 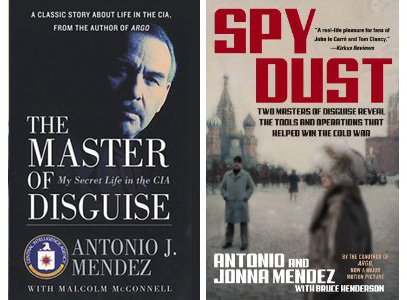 As many of you know by know, Ben Affleck's direct "Argo" has been winning awards left and right. The screenplay for the movie came from a series of real life spy stories written by Master Spy Antonio Mendez in the book "Master of Disguise". I read both of these books about 2 years ago, and i can tell you that some of the missions described are absolutely hair raising crazy.

On the other hand, the Argo story was one of the least interesting. For example, all that "come to this side room" and impromptu yelling interrogation, "we-are-going-to-kill-you" by the revolutionaries at the airport? Never Happened. While I agree the film Ago is both interesting and entertaining, I find it somewhat a little ironic that Argo is winning so many awards, for being a "true story" when in fact, many details of that story are not true. There really should be some kind of regulation when films suggest that what they are showing is true.

The books however, are much more fascinating and full of detail about the Mendez's missions. My understanding is that Warner Brothers and George Clooney have the rights to the "Master of Disguise" book, which has many other very, very interesting stories/missions.

The mission I thought to be most fascinating however was the one about "Spy Dust" in his second book. Holy Incredible. Tony and his team make a plan to extradite a couple from Moscow and they make them disappear in the middle of the Kremlin despite being surrounded by a Russian security team monitoring them!

The one thing that really stuck out in my mind about these missions is that they were never attempted unless there was an absolute certainty they would work, and that in order for them to work, it often required the team to get someone to believe something that wasn't real. Put those 2 components together and what you get is that they were absolutely certain they could trick people and get away with it.

Mendez fills the books with declassified techniques, strategies, trade craft, as well as how he became a CIA spy. With the success of Argo, You can absolutely bet your money that we will be seeing more Spy movies based on Antonio Mendez's missions.

2 great reads if you are into Spy Stories and haven't read them!