We've been working like crazy on the Canon T4i Crash Course Training Video which is very nearly complete, we expect to release it in the next day or two for download.

Went for a late night dive around 9pm-10pm again at Makena landing as part of my certification classes. Can you guys believe I have NO ONE to dive with here, all these pictures are coming from certification classes, lol. Id be diving twice a week if I had a regular dive buddy here on Maui.

Last Night we had some pretty big swells, which meant that in certain parts of the dive we were being pushed back and forth between 5-8 feet. At one point I was questioning if it was a great idea to be out there in that, but it settled down to 3 foot swells. Did some compass navigation exercises in complete dark, which I passed great on. All I know is that it is really easy to get disoriented during night divining and that you really, really have to "trust your compass". It felt like I was going in the wrong direction, but the compass was right.

Some of you have commented on how my diving images are improving. Some of this has to do with my skill (knowing which settings and how to approach the shot) and some of it has to do with plain ol' water clarity (a huge factor). The gear hasn't changed much, though I do find myself almost exclusively going for the 100mm Macro.

We didn't see a whole lot last night. We were with 2 other students who went through their air (much) faster than I did (which is rare). It is interesting to watch new night divers, their eyes are as big as bowling balls and they are really, really jumpy. Its also interesting to watch how these night animals react to inexperienced divers. On at least 3 occasions last night, the newer divers would approach a critter, which would then take off. I would approach the same critter and was able to get within inches. The spotted box fish, yellow fish and Bigfin Squid all literally bounced off my camera housing port.

Im learning that my physical body language/position can all help me get very, very close if I do it right.

Take this first shot for example..this guy was just chilling. I think I was about 6 inches from him. 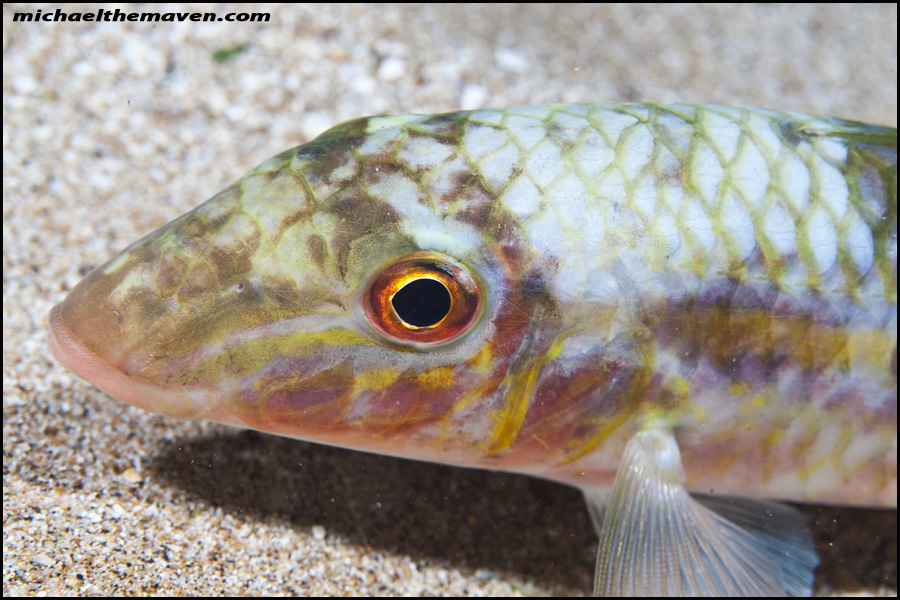 Baby Auger! (About the size of a dime). 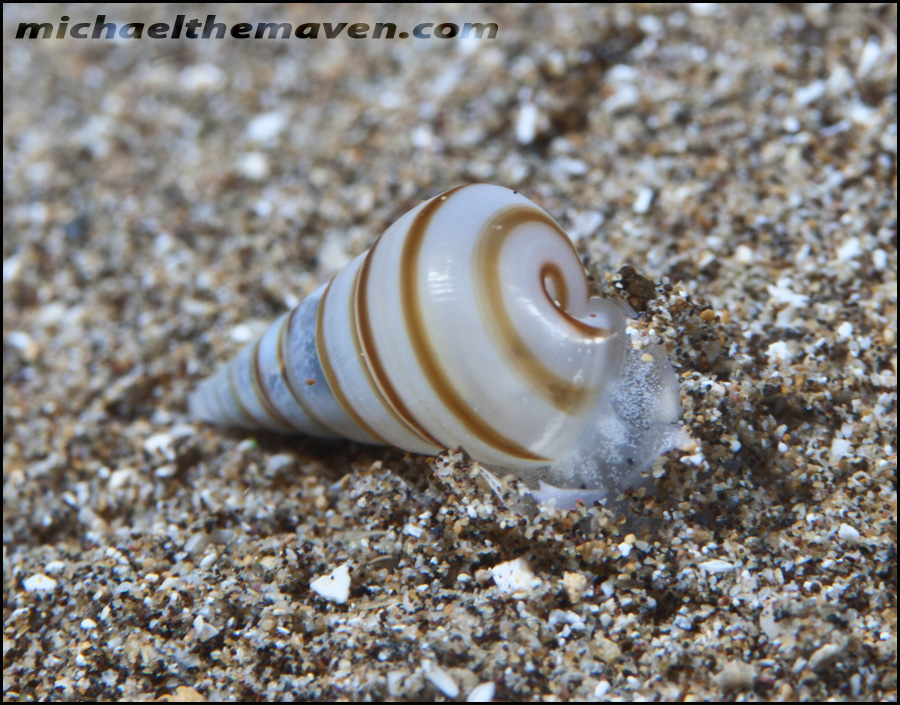 Spotted Boxfish, a member of the puffer family. This guy was completely co-operative, I have about 35 shots of him, but this one shows his pretty colors best. 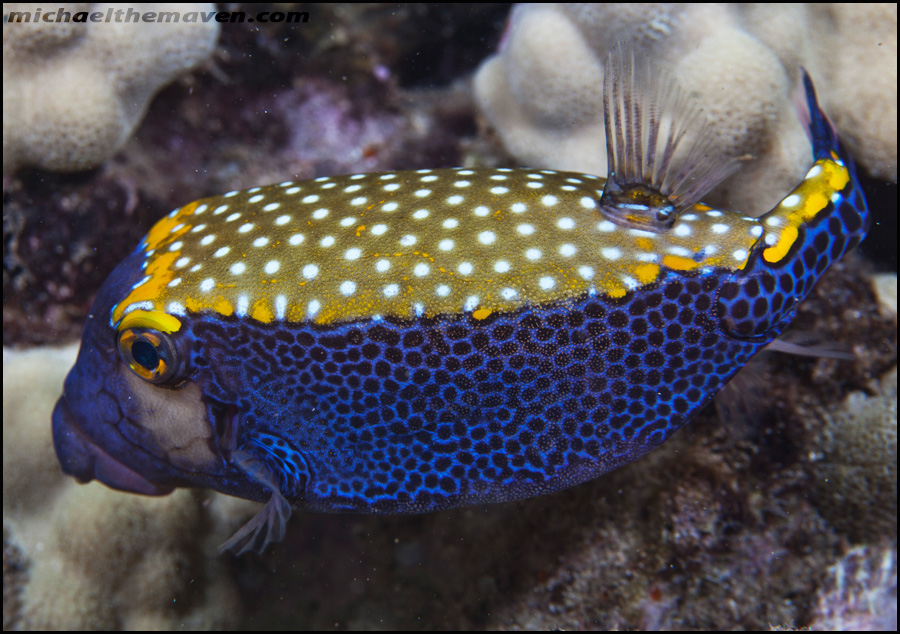 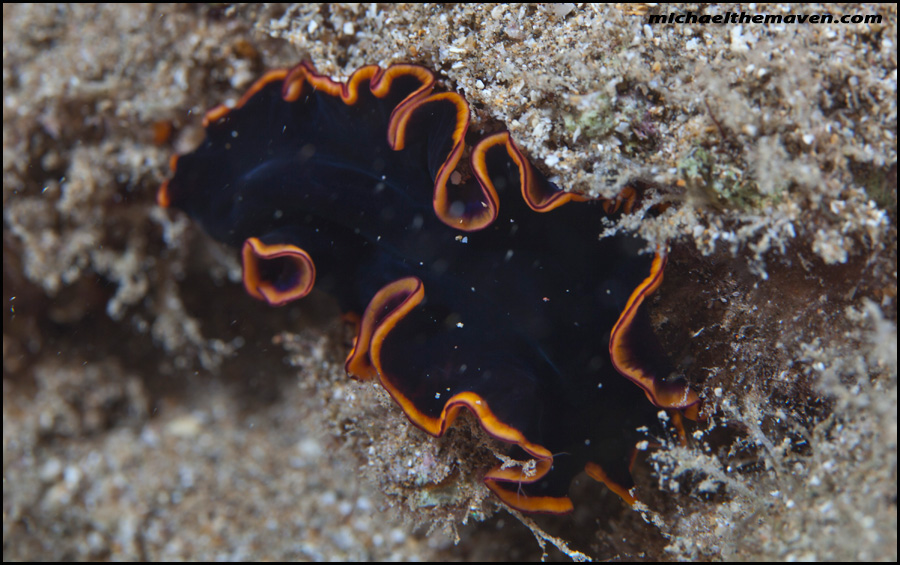 This one was very rare and I had a really weird opportunity to shoot him. Its called a tuberculosous Nidibranch, pretty rare and HUGE for a worm (about the size of a small soccer ball). Our Dive Master Zac said he's only seen one other in his whole life. This guy was caught in the back-and-forth surge, suspended off the ground about 1-2 feet. The thing about it was, the surge was flipping it over and over, so I could get in position above it, I could get every single angle of him without even touching it.

I go above him, and the surge started pushing me around too, but the cool thing was, both the Nudibranch and myself were being pushed back in forth in an equal rhythm. My legs were literally straight up, head with camera facing down and I figured I could fire the shots at the instant the surge shifted. Almost a really quick lull between each wave. It worked!

I think this is the anterior, note the elf like ear shaped lungs poking out. 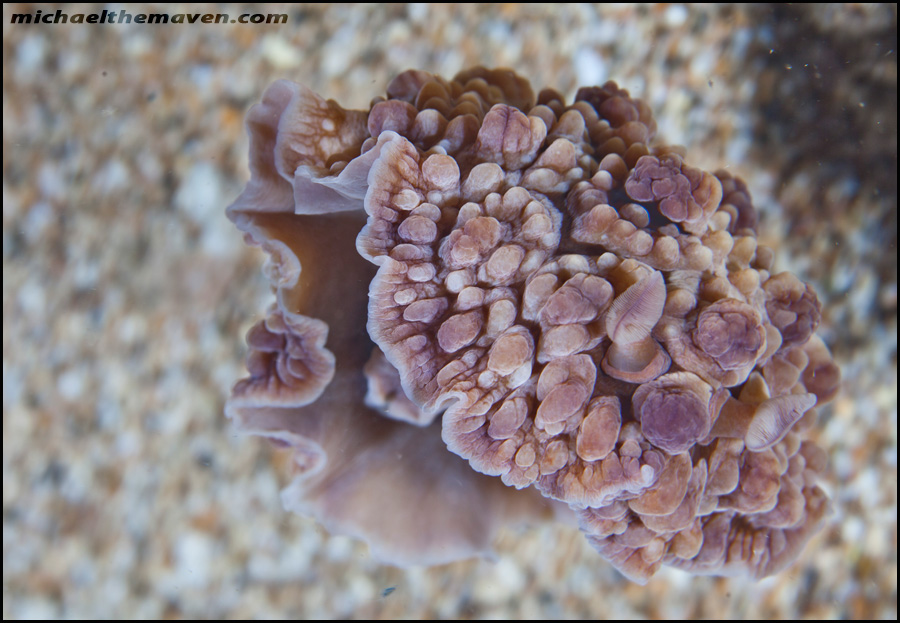 Pretty sure this is the posterior. I could be wrong. 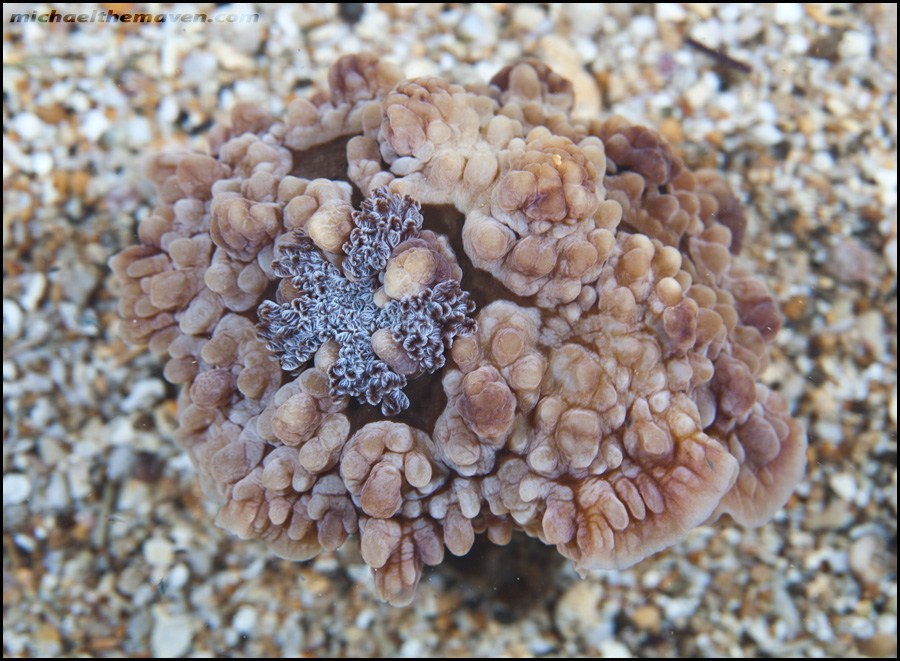 The underside. There is another species that has beautiful white spots. This isn't it. :) 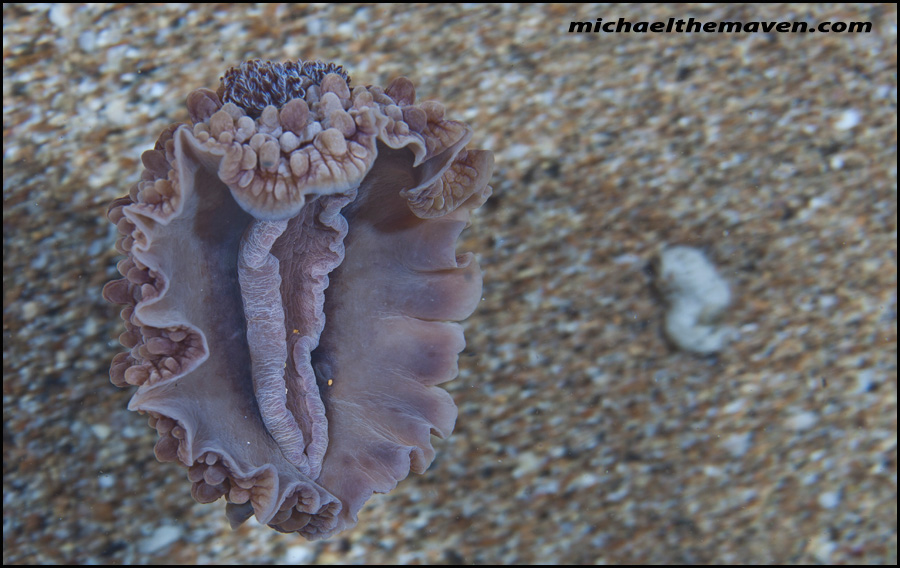 As we were getting out, I met the worlds most co-operative Bigfin Squid. Zac took the other 2 divers away so I could get some one-on-one time with it. Holy cow...amazing. Check out the textures and patterers! 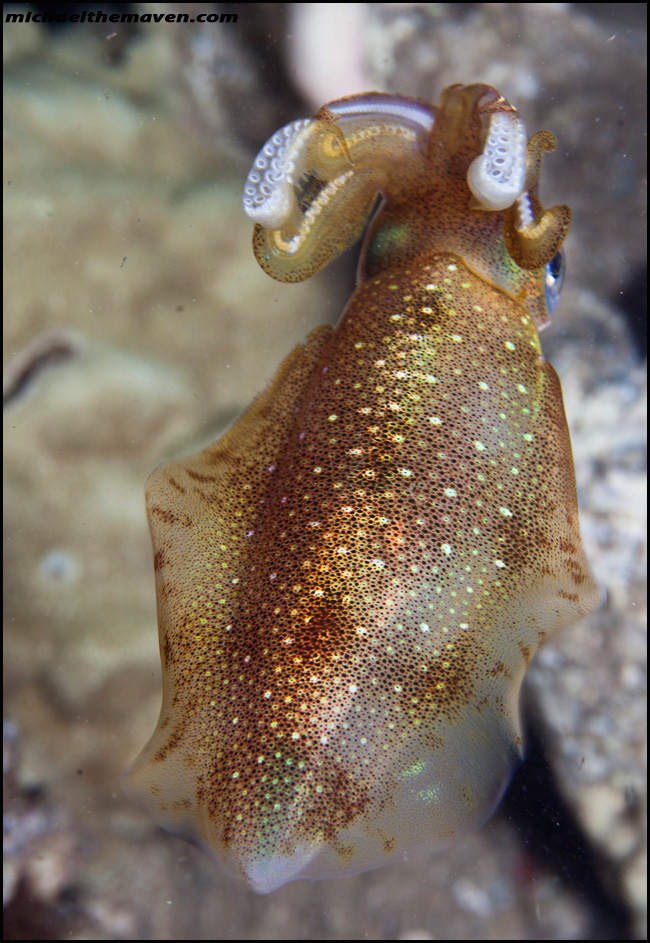 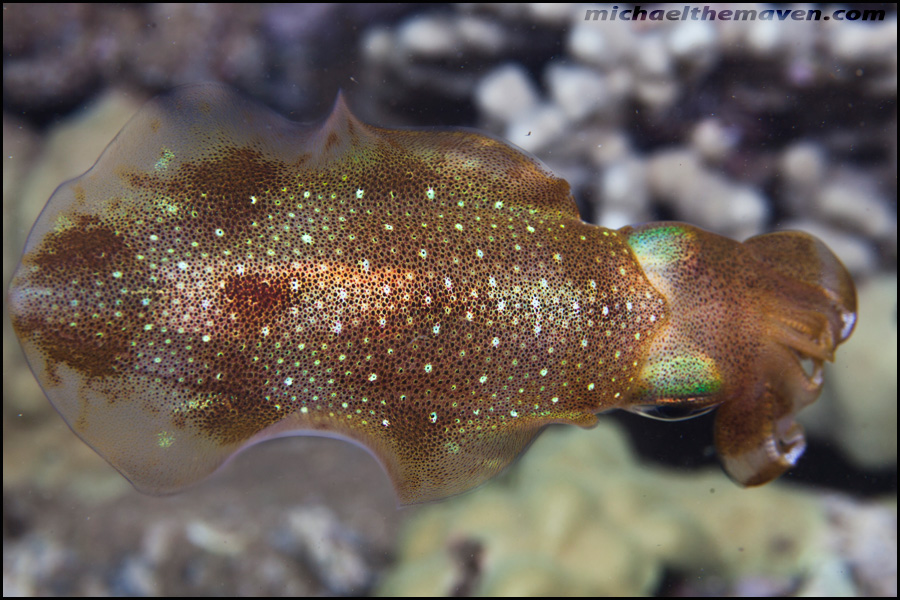 This guy would lift different tentacles as if in an effort to communicate with me.... such a trip. 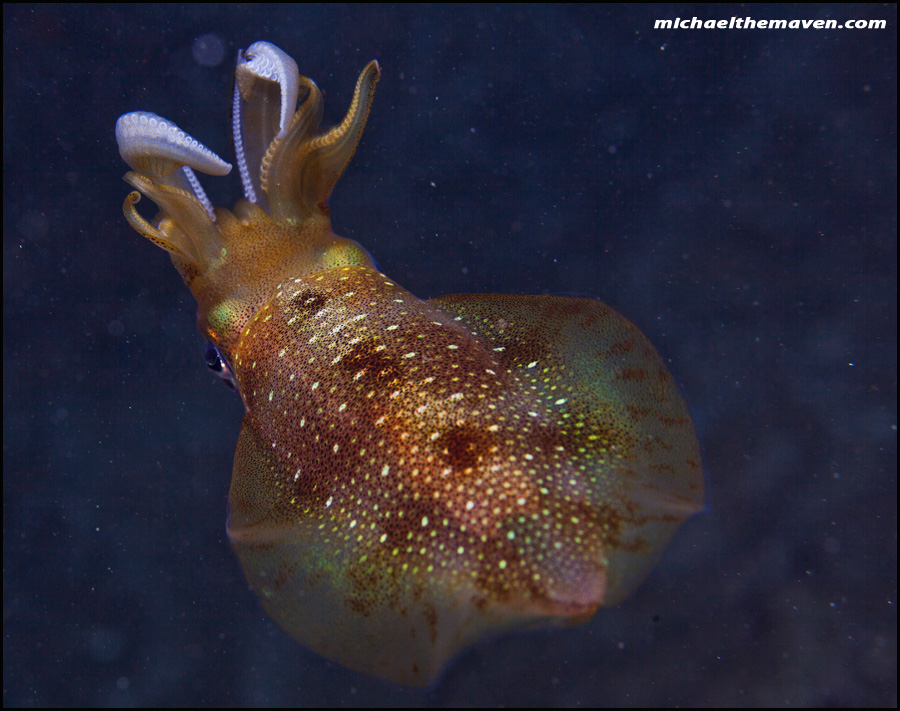 He pretty much let me get as close as I wanted.... 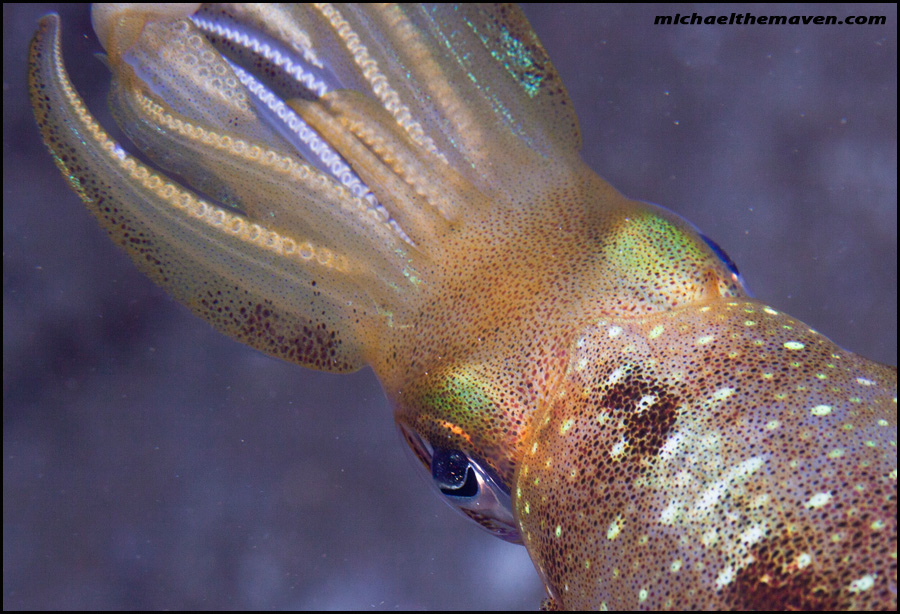 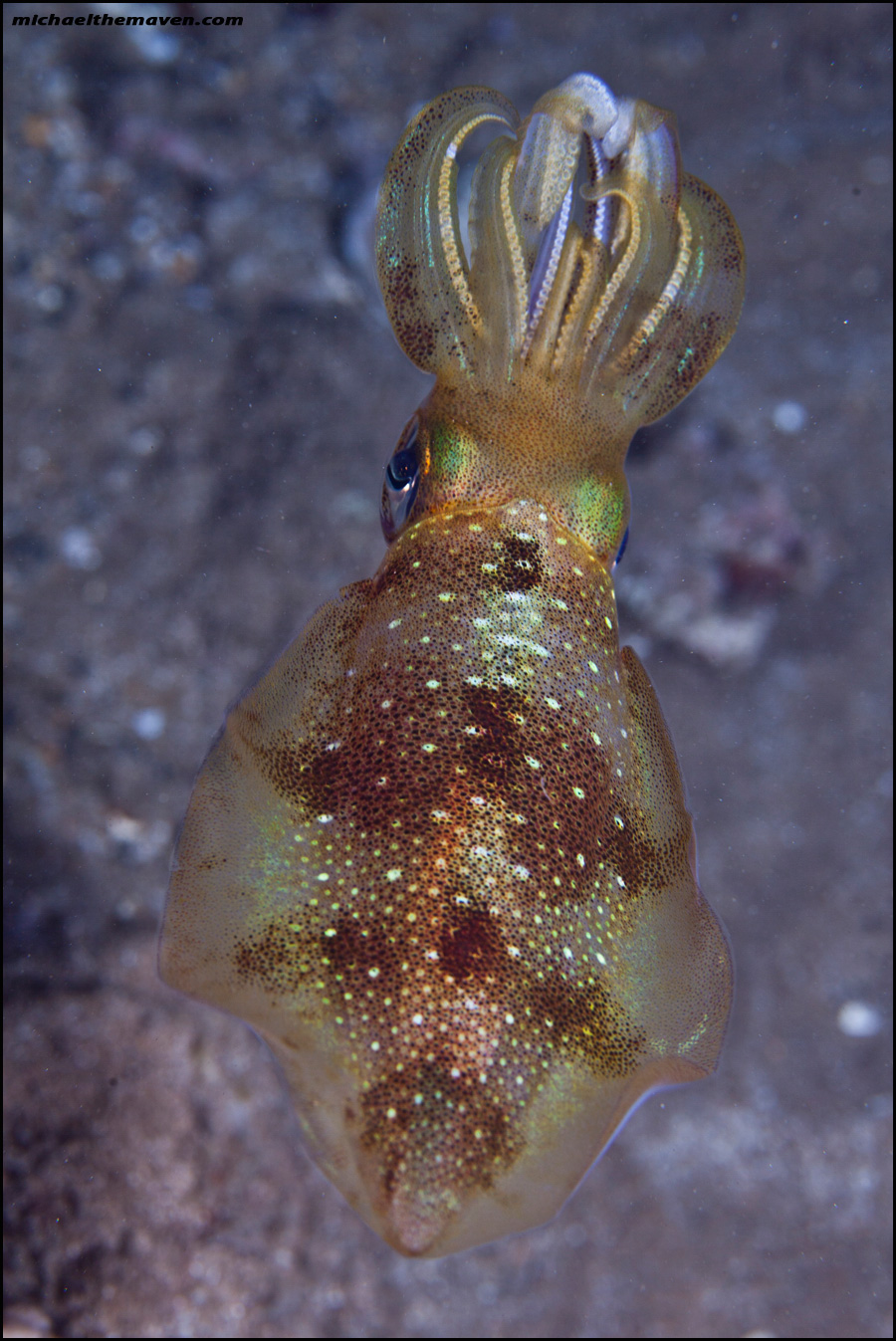 Note the different color and light streaks....these things are brilliant to watch, as if electricity is flowing through them! 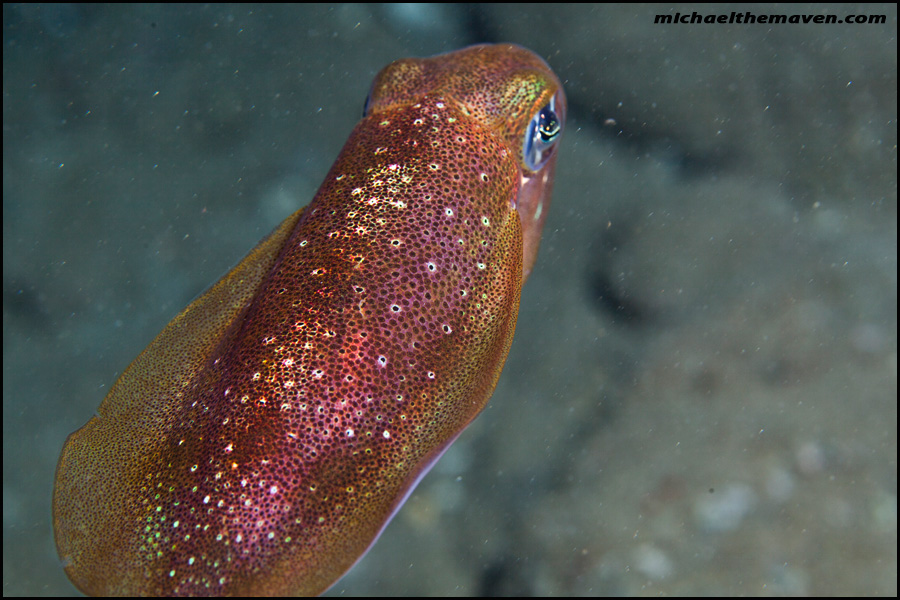 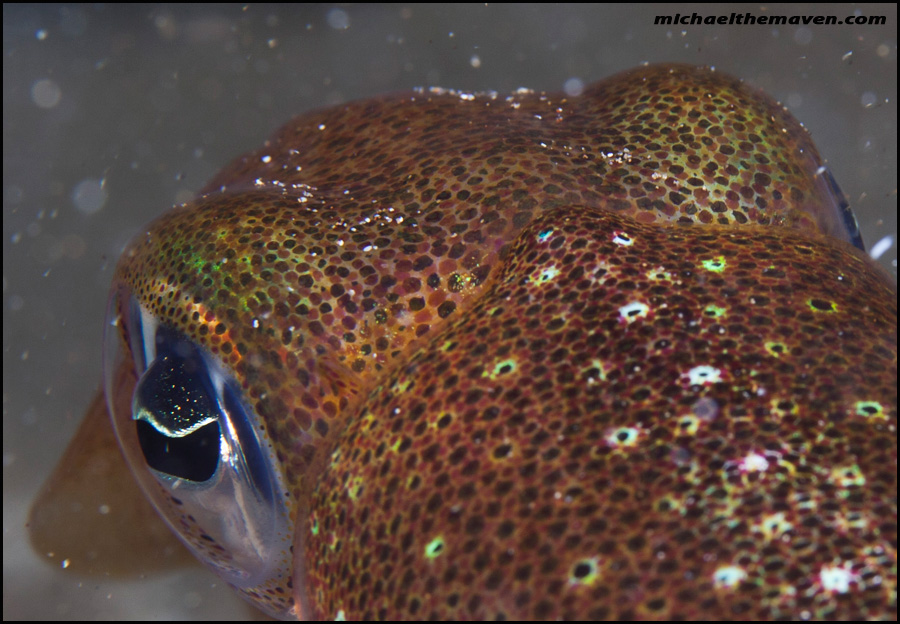