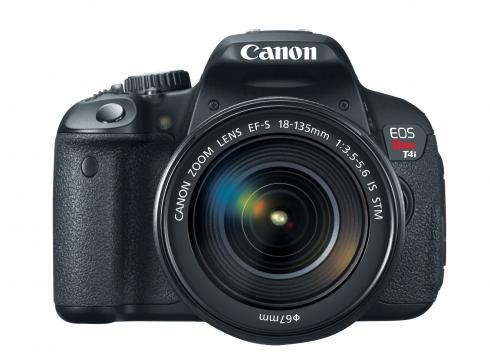 As ridiculous as that sounds, especially considering that it is 95% identical to the T3i, I finally opened my Canon T4i yesterday and started playing around with it. Yes, initially it looks, feels and besides of the touch screen and new focusing systems, this IS a Canon Rebel T3i.

That said, the new touch interactive screen is absolutely KILLER and I am going to go on record to say this is the future of DSLRs and will fundamentally change the way photographers use cameras.

Here a few of the many things you can do with the new monitor:

- Scroll through and magnify images (about 10,000 times easier and more user friendly than the "push-this-button-20-times-and-move-directional-pad" technique). When the 5Diii came out, I was irritated with the fact Canon had simply moved the zoom button. On the T4i, once I saw how this worked, I didn't even attempt to use the zoom buttons (they are still there), I instinctively find myself using the swipe, pinch, spread finger gestures on the monitor. It is straight up freaking awesome and feels so much faster to use.

- Change your exposure settings - you can swipe and roll through your camera exposure settings very easy. I am not so sure how often advanced users will do this, but I think beginners will find this much more intuitive.

- Touch Screen Focusing - For all the complicated and different ways there are to focus with a DSLR camera, either through the view finder or through live view, this is huge: Touch on your monitor where you want it to focus. While it isn't the fastest focusing method, it is still reasonably quick, and if you are shooting with a very wide aperture lens, say 1.4, or 1.2- it also means you will not need to recompose once you get focus lock. Of all the focusing systems I have seen on a camera, this is the easiest (by far) for a beginner to learn.

- Auto Shutter - You can program the T4i to take the shot once focus is locked. What this means is that in combination with the auto focus, users can simply touch the screen to focus AND take the picture . The fact that you can hold a DSLR, then focus AND take a picture simply by tapping on your monitor is a completely different experience than holding it up to your face, halfway depression to focus, recompose and then take the picture. We eliminate all but one step and thus, yes, we have a game changer on our hands.

- The new tracking focus will also allow videographers to track moving subjects as they are recording. A very welcome improvement for videographers. Not sure how well it stacks up against the Nikon D3200 , but I can feel a test coming.

Many of the shooting menus can also be changed with touch screen interaction, I will shoot a video review on this soon, but trust me when I say touch monitor is a beautiful thing and you cannot help to think "this is sooooo cool!". In fact there seem to be so many little ways to tweak settings through the monitor I will have to have several lessons on it for the Canon T4i Crash Course Training Tutorial Video, which production we should start tomorrow or Friday.

Touch screen monitors require a hardware overlay in the monitors themselves, so we won't be seeing any firmware updates for the 5Diii to add this functionality, however, I would be willing to bet money that we will see the touch screen on most of Canon DSLRs (as well as point and shoot cameras?) from here on out. It is an excellent and very welcomed new feature that not only greatly improves viewing images, but the shooting experience as well.

The monitor's touch sensitive interactivity combined with the power of a robust DSLR system, make the T4i a game changer for how we learn and use DSLRs.