So I've started regularly scuba diving and have found night dives to be quite fascinating, because so much interesting animal life comes out. I'm also learning quite a bit about how to best shoot at night, underwaterâ¦.a bunch of little things like;

- when it would be better to have a 2 strobe cord vs 1 strobe cord with secondary on slave feature (Answer: when there are other photographers in the group, you will want to hard wire both).

- It is typically better to shoot on AI Servo mode because everything is moving so fast and hard to get a focus lock anyway.

- Dedicated Macro lenses are better later in the night, because more nocturnal slugs, worms, cones and other little critters will be more abundant. Also probably a good idea to limit the focus range if you are going after pure macro shots.

- AV Mode is better during the day, but manual mode is probably better at night with flash strobes, but then again Av is also good when using the video light for stills.

Stuff like thatâ¦I totally wish there was a "Underwater Photography" Crash Course DVD, taught in the way I teach (no-nonsense, straight to the point and easy to understand) because I can see this is going to take quite a bit of time to get really proficient at.

As we are gearing up last night, and my buddy Justin pulls me aside to say that a rather large tiger shark had been spotted in the area earlier in the day. I am getting used to hearing these warnings. No big deal right?

We get in, have a fun dive and take a break at the bubble cave, which is essentially an underwater cave that has an air pocket opening where you can actually just chill and talk for a few minutes. Turns out Im down to my last 1/3 tank of air (Im usually the first to run out) and distance wise, we are at the halfway point, which means I really have to bee-line back to the shore if I don't want to surface and swim back (Which I don't). I mention this to everyone and it's agreed that we are all heading back together.

It becomes pretty apparent about 2 minutes later, no one else is in any hurry to accompany back to the shore, I tried to wait for them to come to me, but quickly running out of air and really just deciding to take care of myself in that situation, I decided to move ahead, and get back as quickly as possible.

I start swimming at a pretty fast pace along the coral reef, following it to the beach, and there is a certain part of reef wall that takes an almost 90 degree turn, you can't see what is on the other side, and whatever is on the other side cannot see you. Being that everything is pretty much pitch dark with the exception of what is in front of your light, as well as running out of air, and being completely alone now, somewhat adds to the tension.

Right as Im starting to make my turn around the reef wall, in almost the exact way I imagined such an encounter happening, about 20 feet away, I see it cruising along like a missileâ¦, Im guessing between 6-7 feet. My very first thought was Thats BIG, it has to be Tiger Shark and I quickly start scanning its body for the distinct Tiger Shark pattern but its too dark to see. The shark now sees me, and turns directly towards me to investigate.

Im proud to say that with all this tension, running out of air and having this shark headed straight toward me, my dominant thought was "Okâ¦.be coolâ¦.. I kid you not this shark literally swims right up to me, 2-3 feet away from my camera housing. I also figure if it tries to bite me, I can at least have something between me and it (my camera) and I can just jab him with it. I also wanted to get some shots for the blog, but unfortunately, I have my 100mm Macro on there and even attempting to get lucky on several of the shots, maybe some gills or an eye, none of them turn out.

Thankfully, the shark was actually a large white tip, not a Tiger. He stops just short and then circles around a little checking me out and then leaves. Probably the biggest white tip I've ever seen, but still a rather interesting encounter and more so because I was alone.

I bee-line for the shore, and caught glimpses of the shark just ahead of me, and the crazy thing was, there was a second group of divers who just above me who didn't even see it. I am sure, there are TONS of creatures and fish I don't see and they are right in front of me.

I was only able to make one dive last night, but I did get a couple good shots: 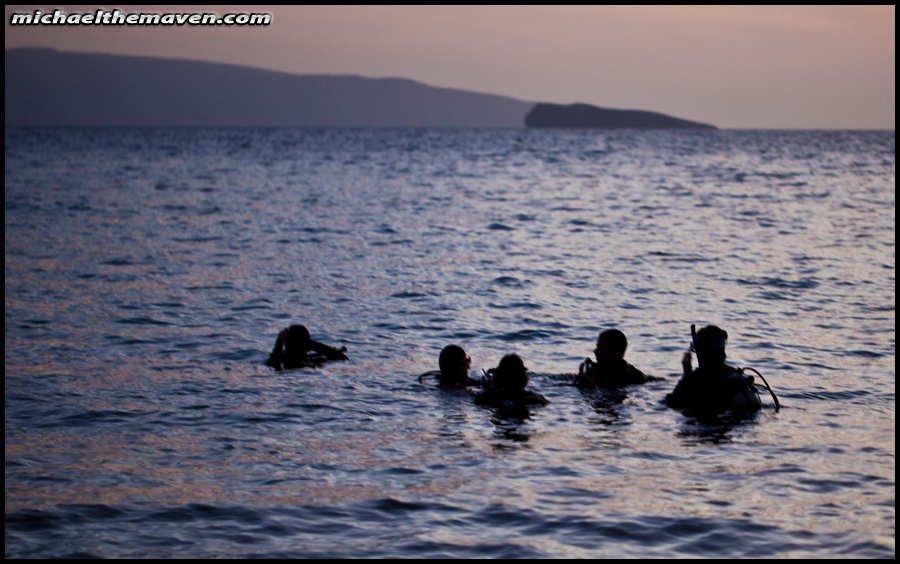 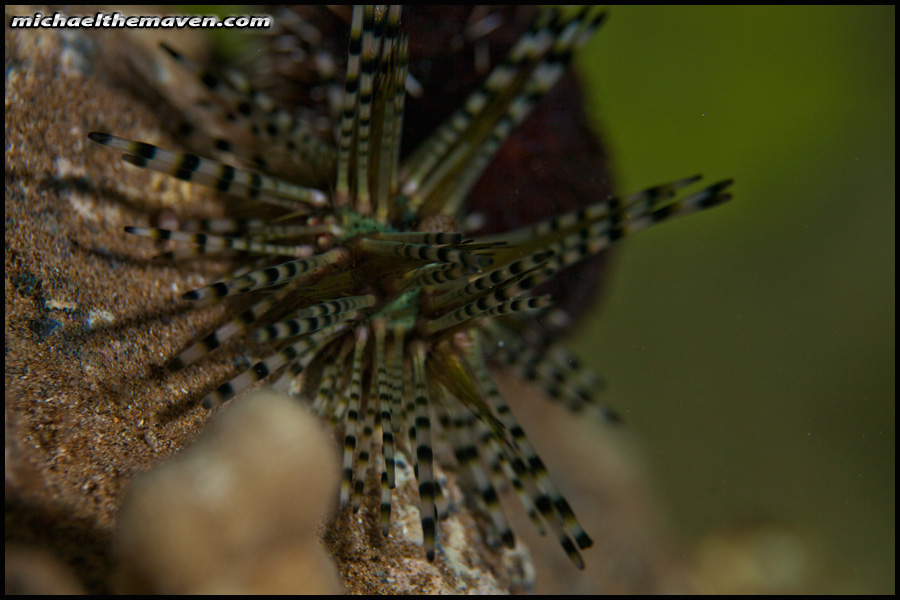 These first few are like "warm up shots" i just make sure all my gear is working, strobes are working, I have a good exposure settings etc... 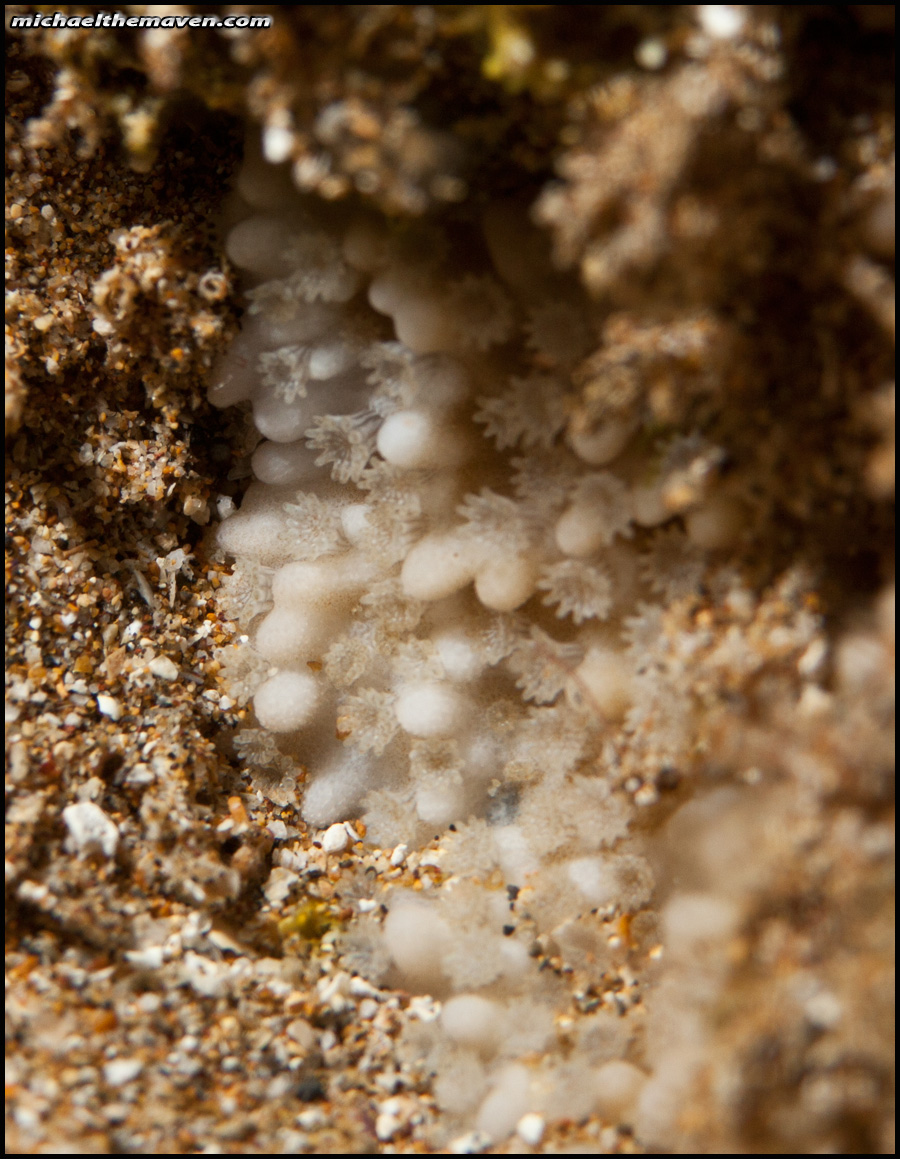 It really is amazing to see all this life everywhere out there at night... 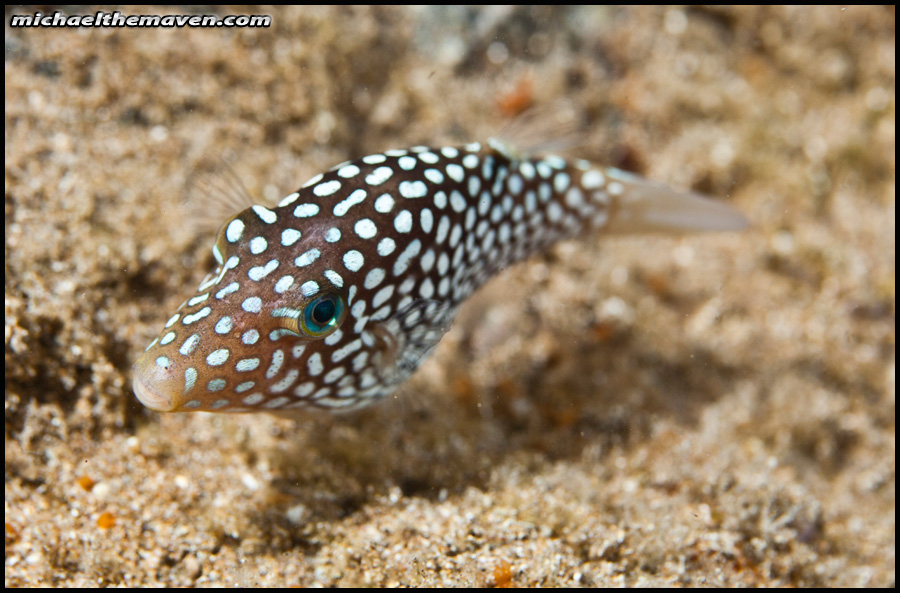 These little guys are everywhere.... 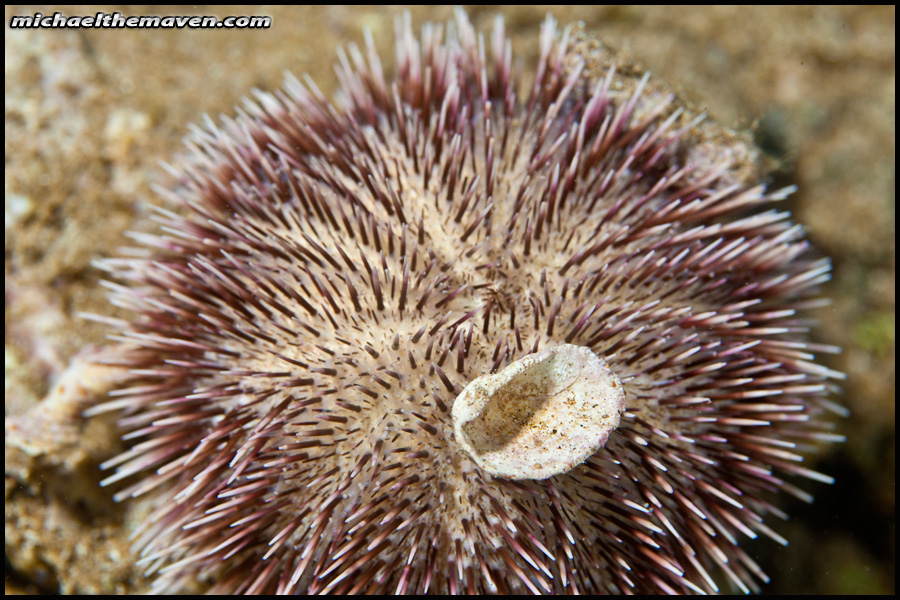 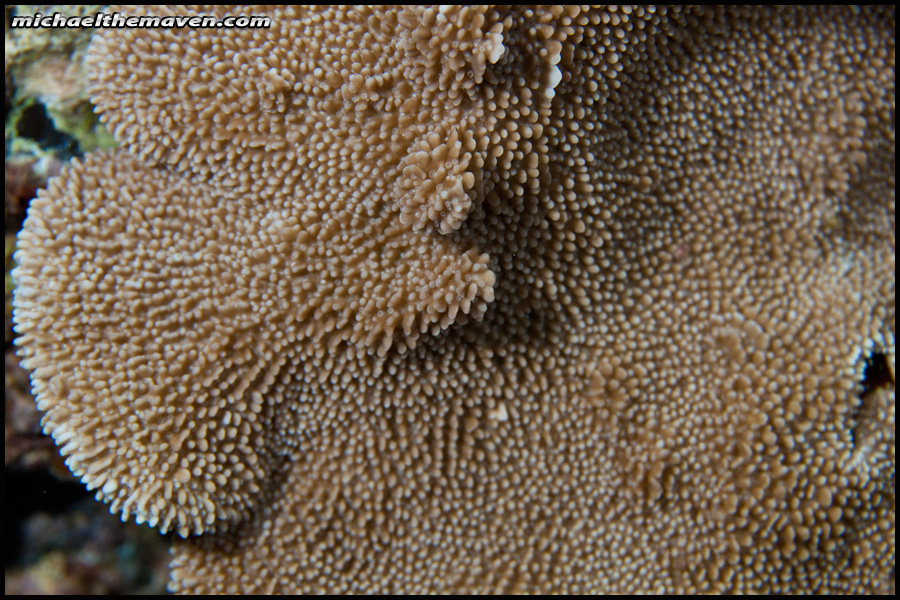 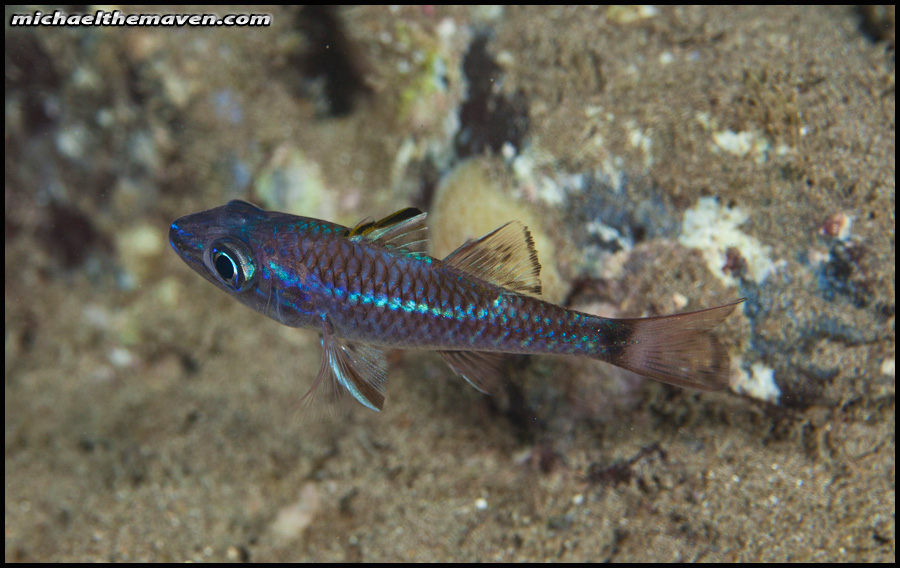 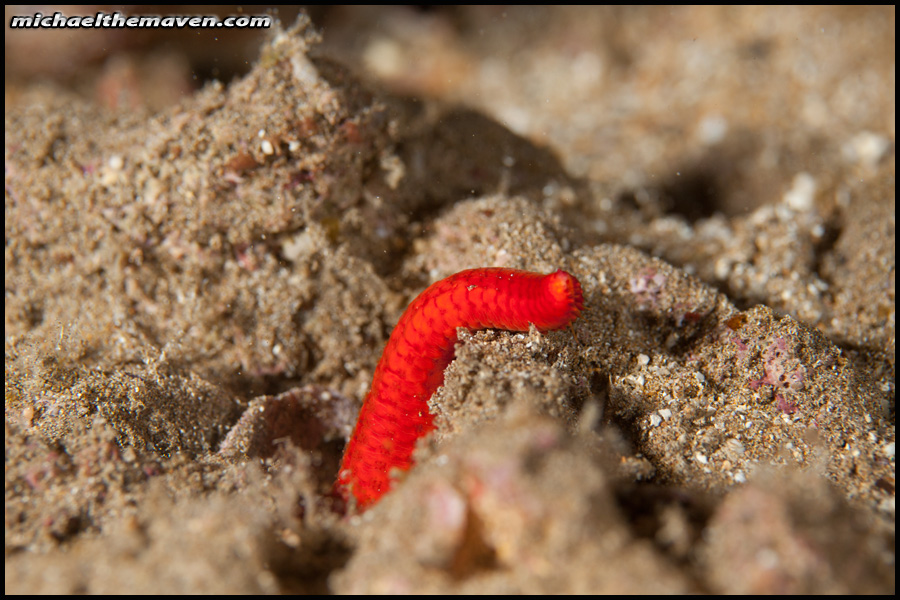 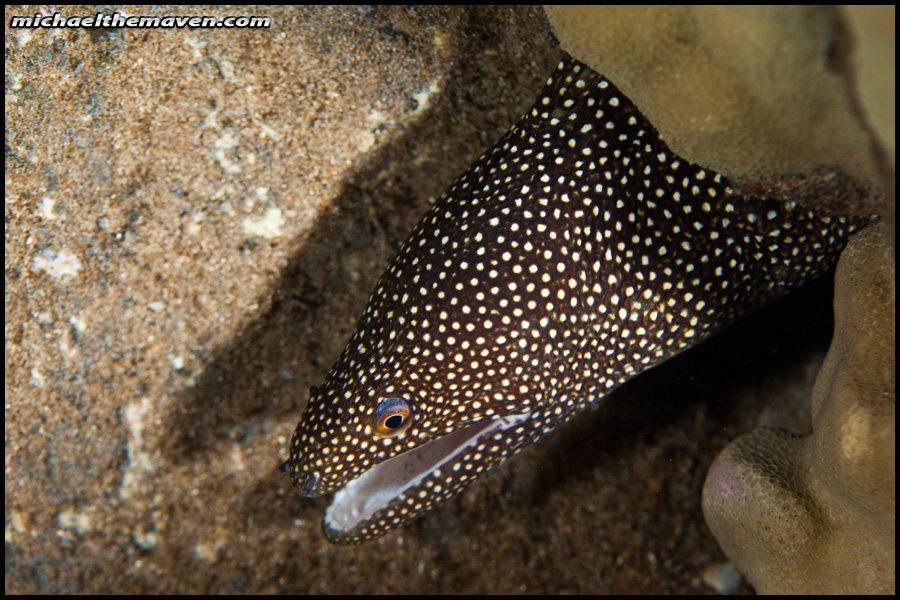 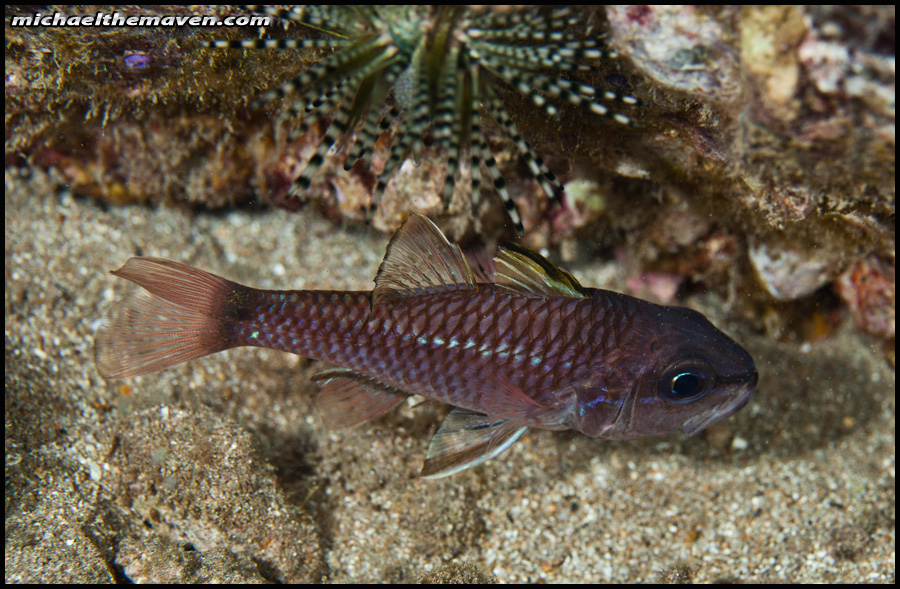 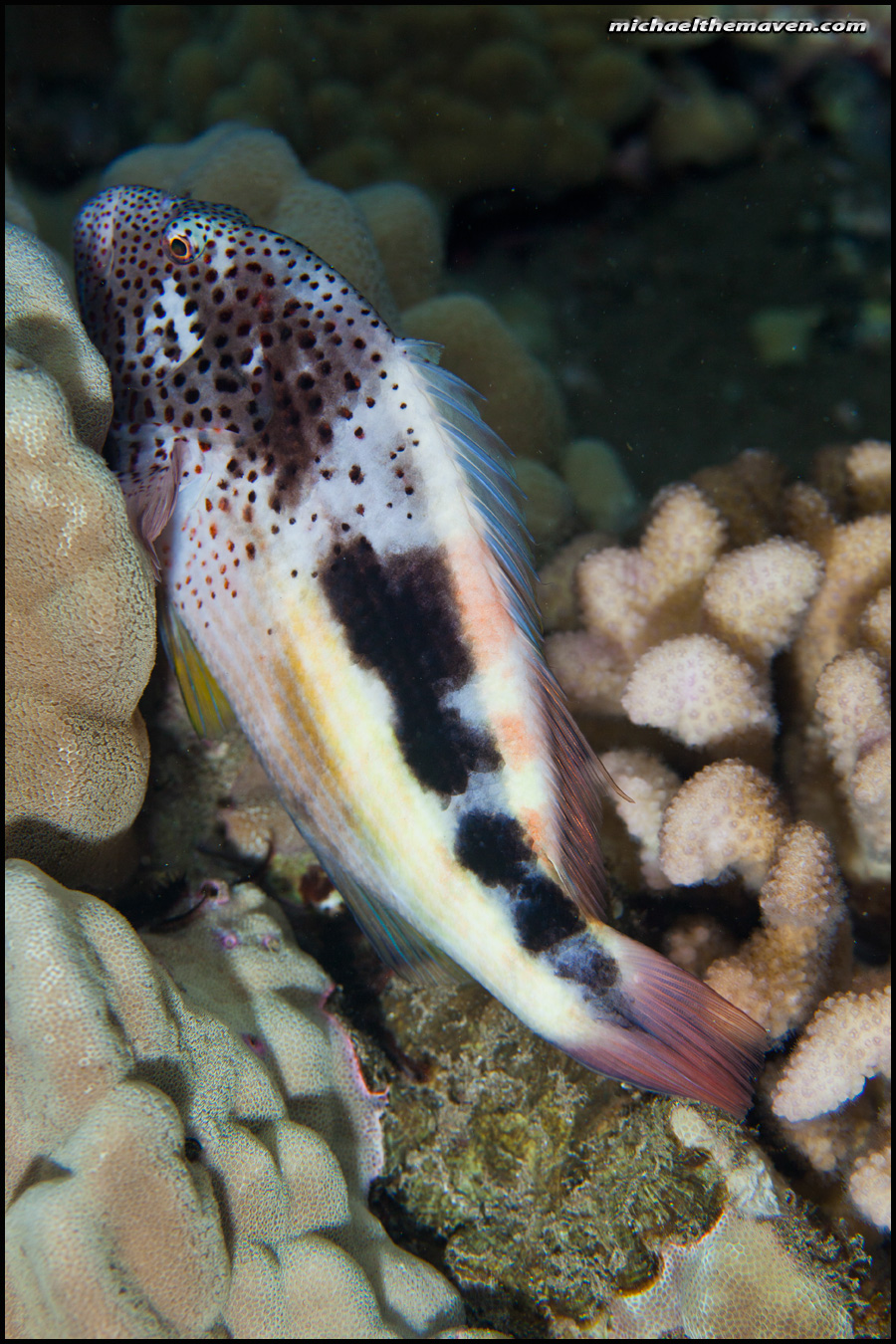 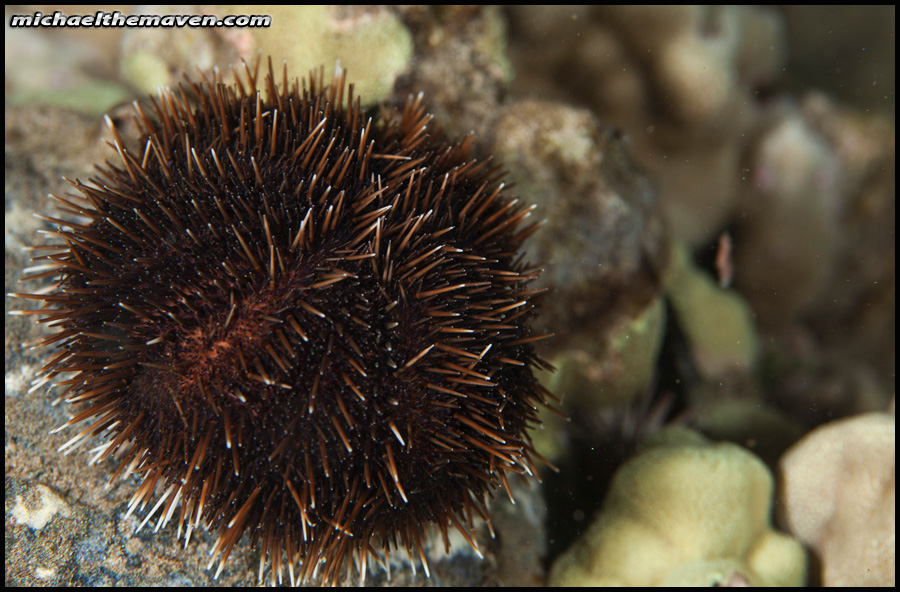 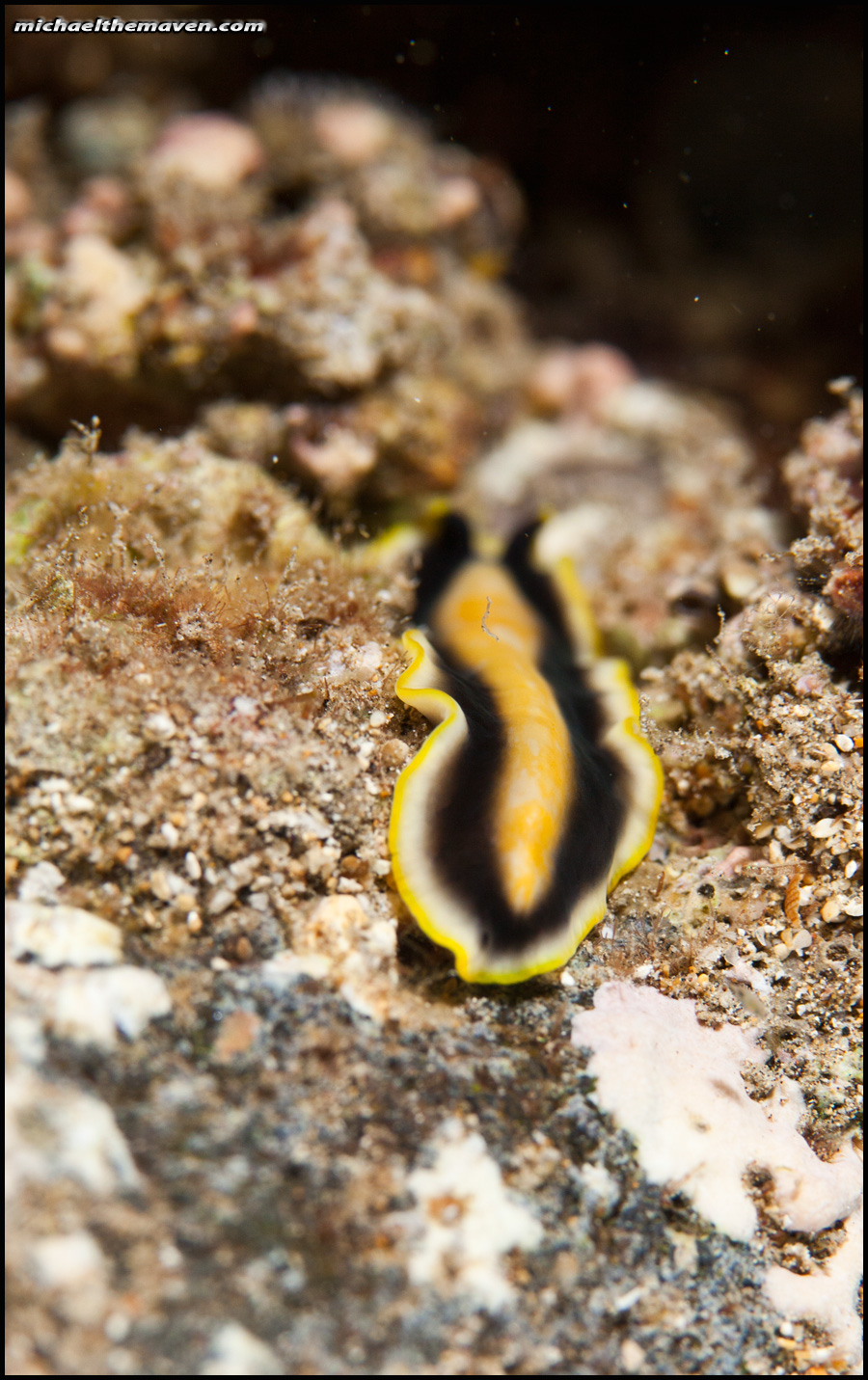 Thought I had this Nudibranch in my sights....unfortunately he was running away from me! For a sea slug, these guys sure are fast. He got into a crevice before I could line up a good shot on him. 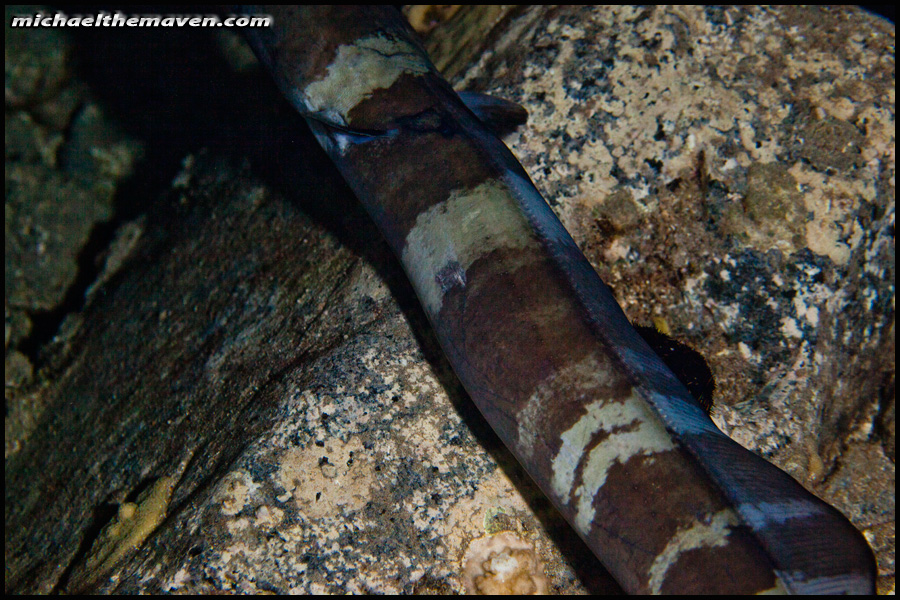 Part of a Conger Eel....this is the limitation of shooting with a 100mm Macro, you miss the big stuff.... 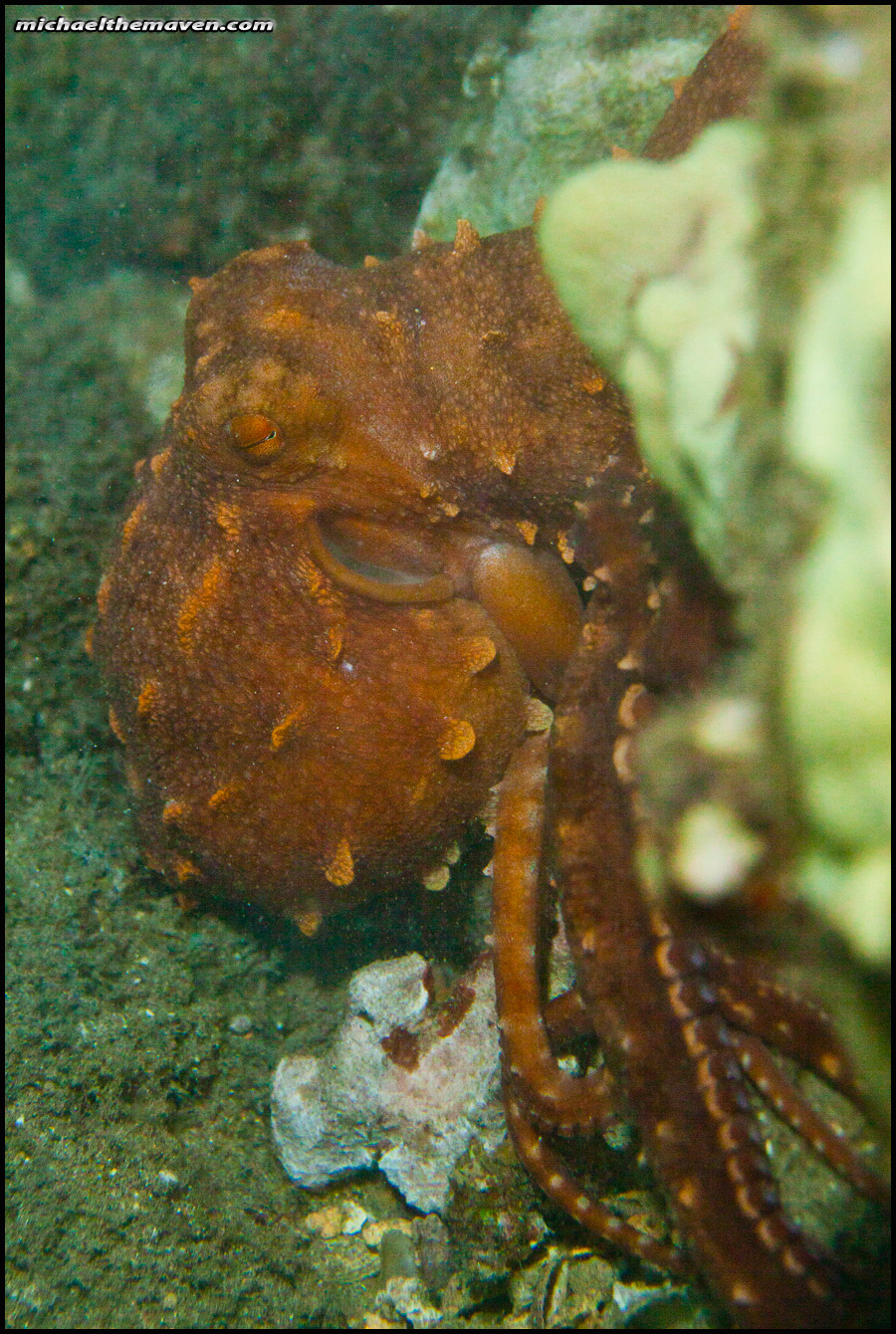 Was able to get a few ok shots of an Ornate Octopus....he was pretty big and someone patient of me taking pictures of him. 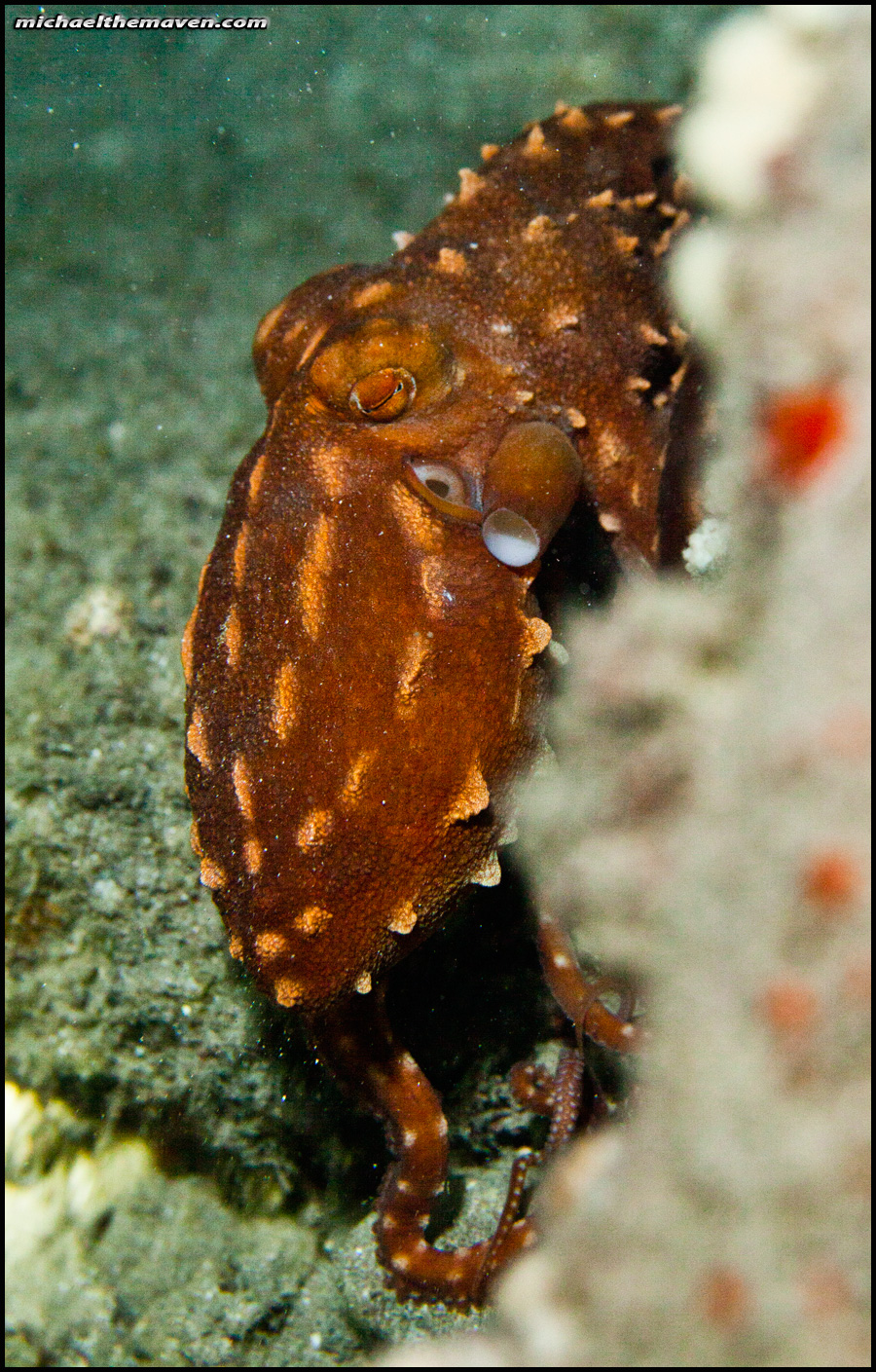 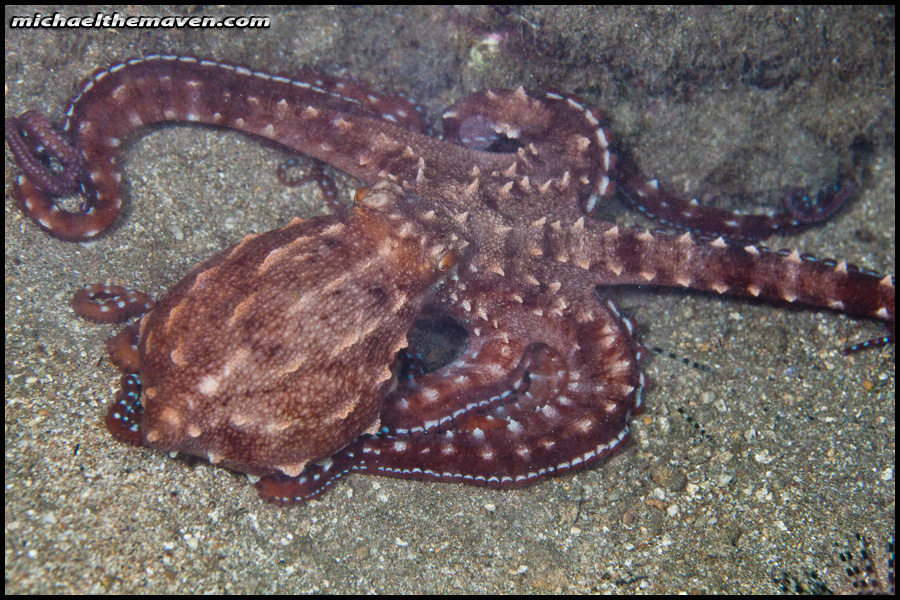 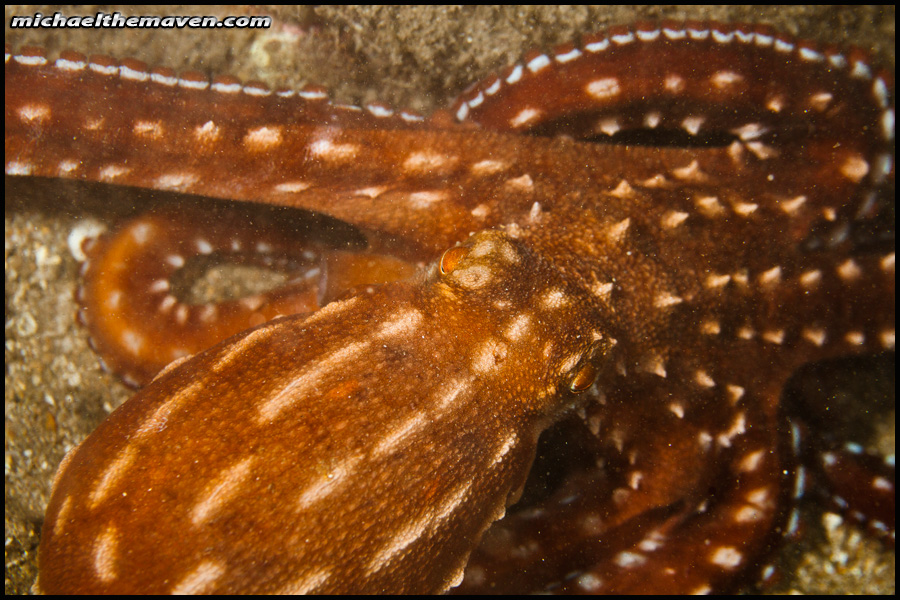 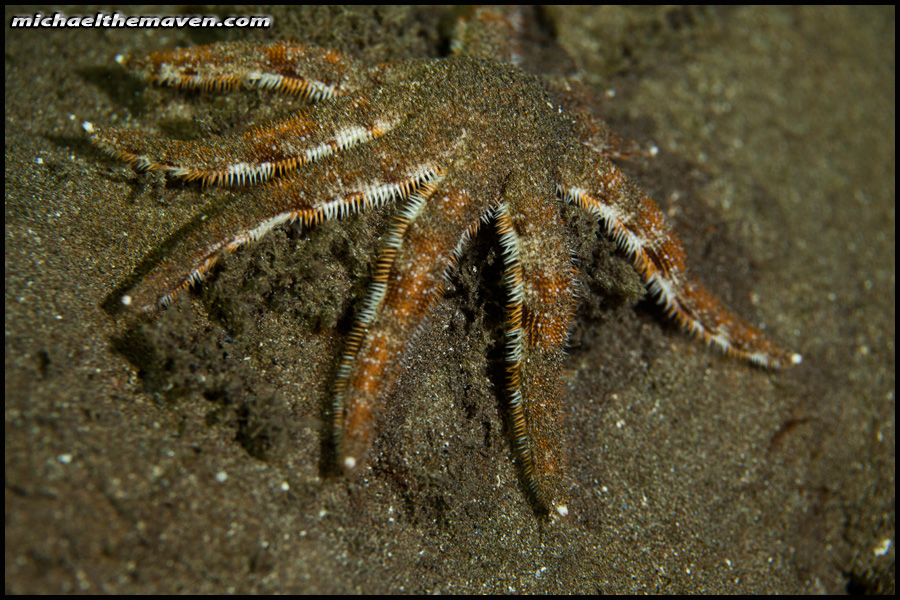 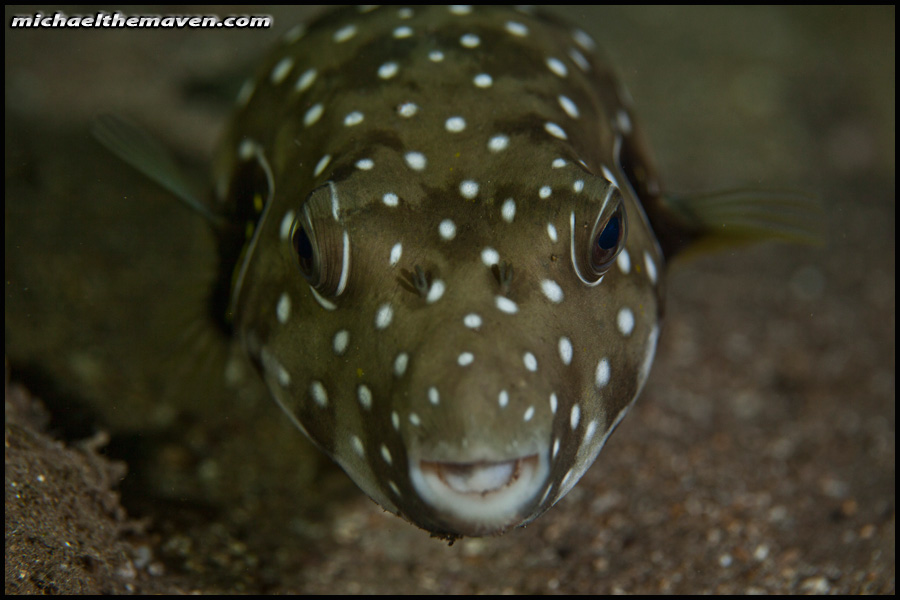 These little puffer fish are SUPER co-operative. They are as interested in divers as we are in them. Second time I had one literally bounce off my camera housing. 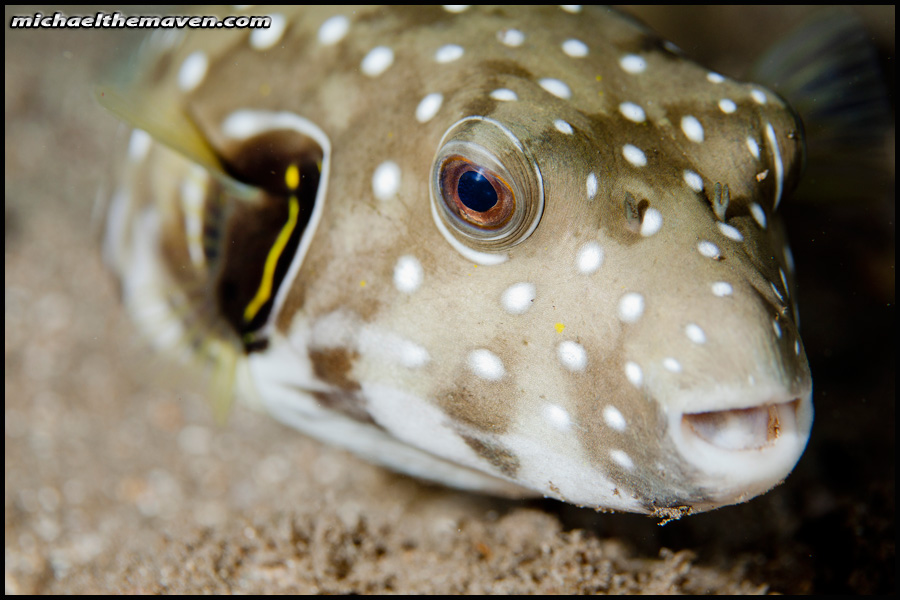 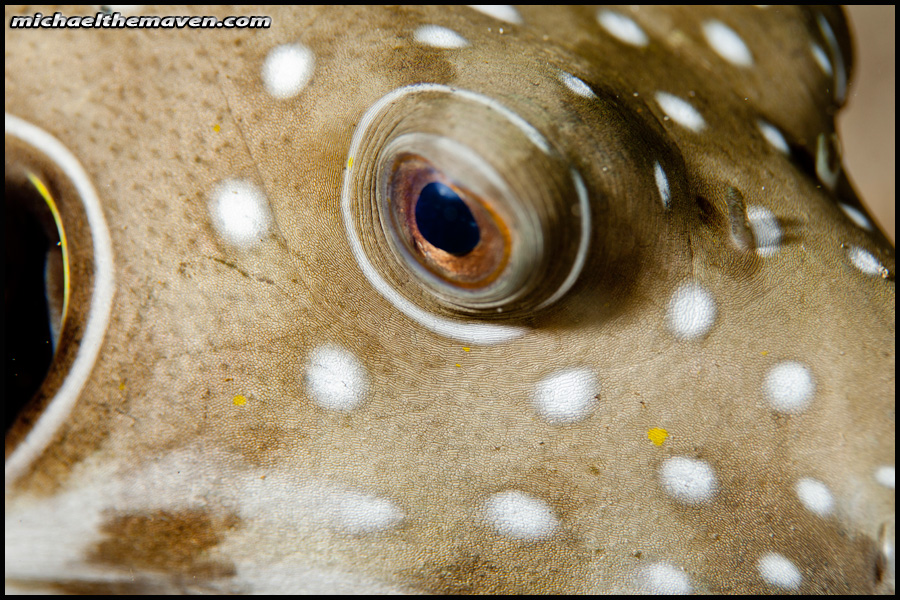 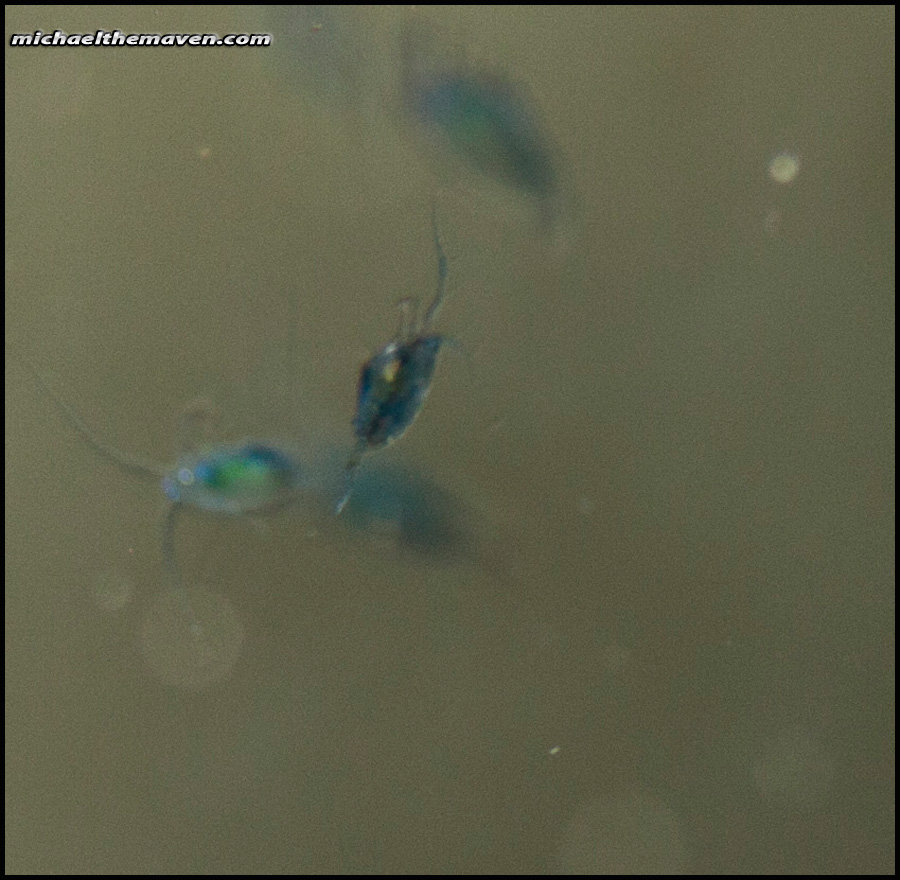 There were about 2000 of these little blue things swimming around my lights...who knows what in the heck they are.... 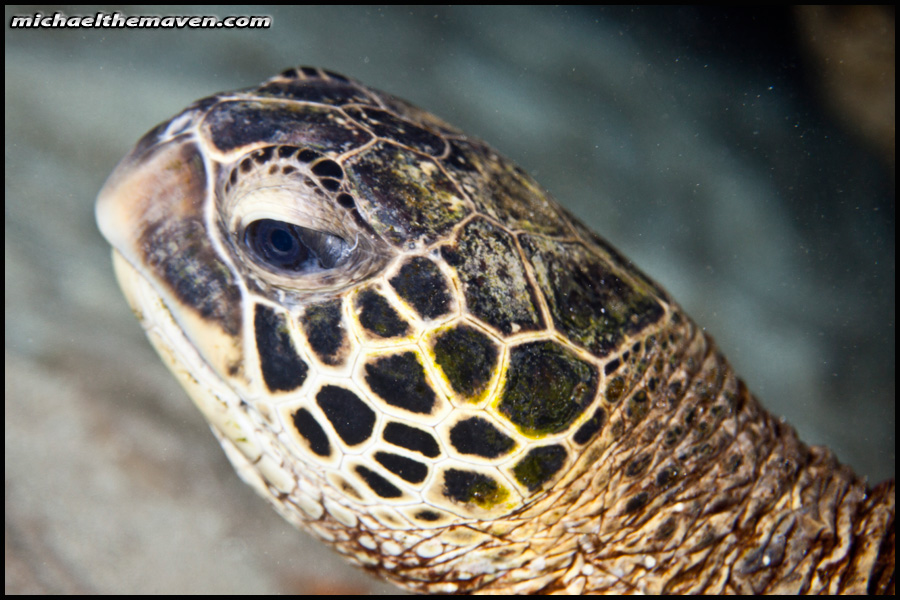 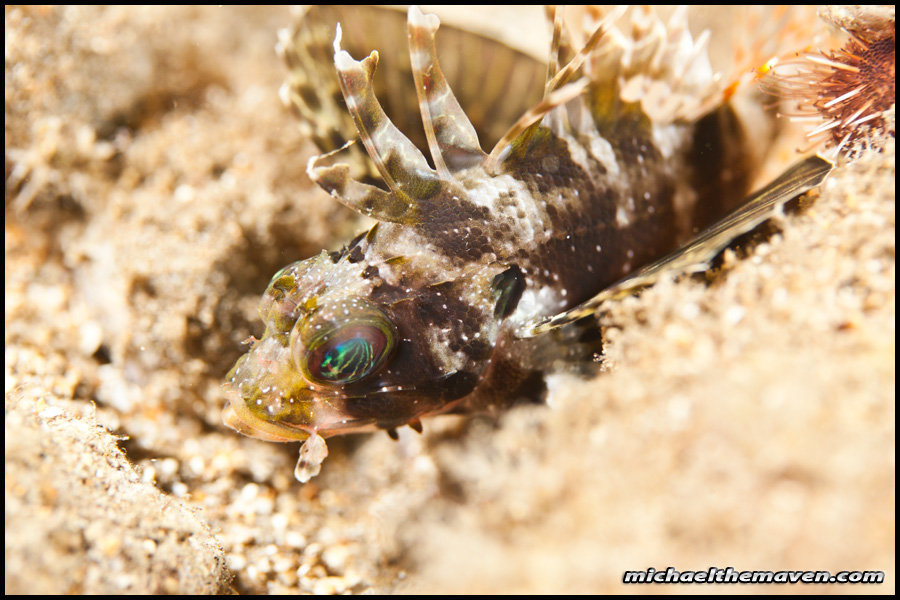 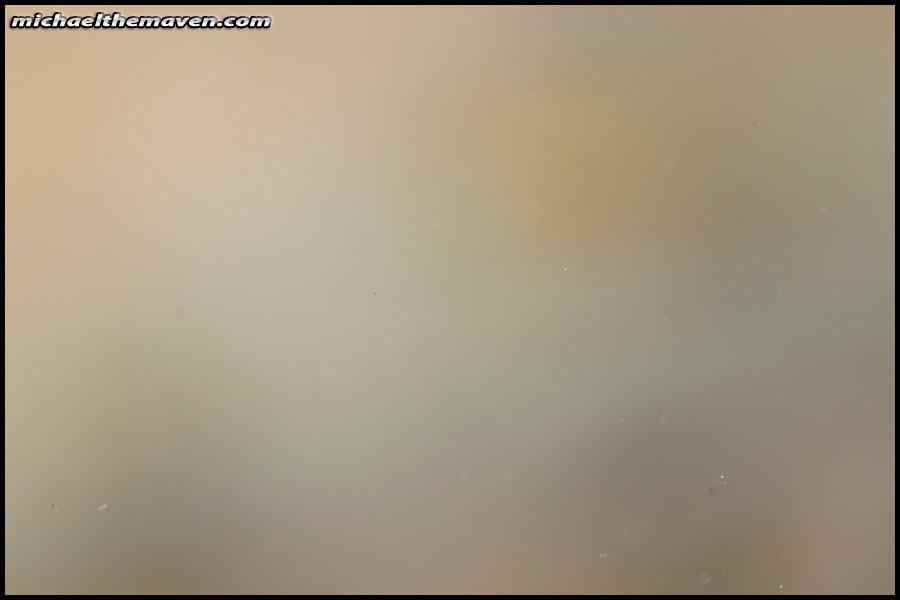 This was taken during my shark encounter....not sure if this is part of it or what, but you get the idea of why having a macro lens is no beuno for the bigger stuff.