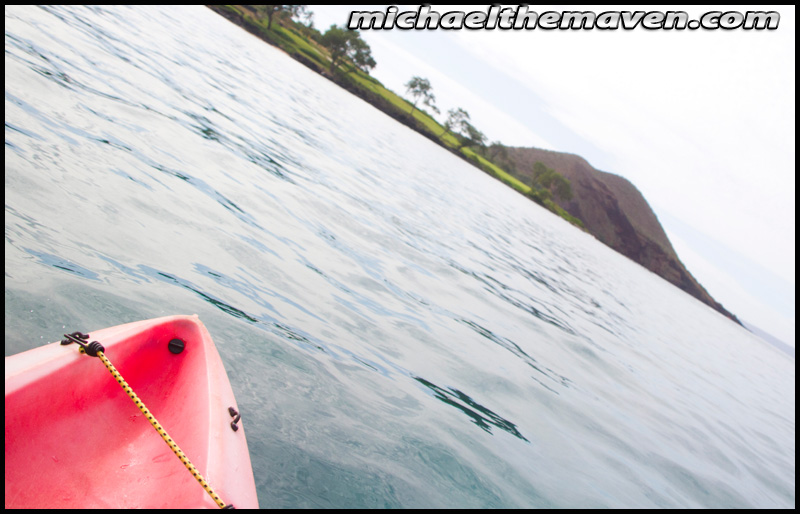 Being my lucky self, I checked Craigslist yesterday and found this one-seater Kayak for a mere $175. It included the seat and paddle too! I immediately bought it once I saw it, threw it on my rack and drove it home. This morning I thought I would take it out for a leisurely test drive. I wanted to check for leaks and find out if there was any other gear I needed. In many ways, it reminded me how many new photographers must feel went just starting outâ¦I have an idea of what I want to do (go kayaking and snorkeling off my kayak), but I am not really sure what gear I need, where to buy it or even what the basic Kayaking rules are on Maui. I know there are a few different places to launch, and I chose Makena Landing because that is where I have gone with different Kayaking tours.

The humpback whales are also just starting to migrate to Maui again, and come Late December, they should be here in full swing. Would love, love, love to get some shots of them jumping out of the water, however there is a law that says you cannot get within 100 yards of them, which I plan on respecting. (The guy who sold me the Kayak said he was caught and fined $500 for getting to close). Still that 100-400 on a Canon 7D (640mm equivalent) should allow me to get some great images. Being on the water, without anything but 100 yards of space between me and the whales should be prime photography opportunity. Im excited.

One major problem: Kayaking is a very wet sport. Usually your legs and waist are literally in water as you paddle, so I wanted to know how feasible it was to throw a 7D and zoom lens into a dry bag, kayak out a little and then remove the camera and take a few shots. I was able to bungee cord the dry bag to the hull, so even if I tipped over it would be ok, and when I was ready to shoot, I opened the bag and took a few quick shots. It was pretty easy to rest the camera in my lap while paddling and as long as the water is calm, I don't think its going to be an issue. When I was done I just dropped the camera into the dry bag, closed it up and landed.

I am really, really excited for this because I can go kayaking now anytime I want, without having to rent gear or get on a tour. I do know that I already want a 2 seater kayak to take friends and family out occasionally, and I have already found a place where to get it. I though they might be too big for my Prius, but I don't think that will be a problem anymore.

Doing a test run like this also quickly showed me that I need an anchor & paddle leash so I can stop off anywhere, dive, then get back in without losing my kayak.

Sooooo much fun and a great way to take a break from editing and doing Maven type stuff. 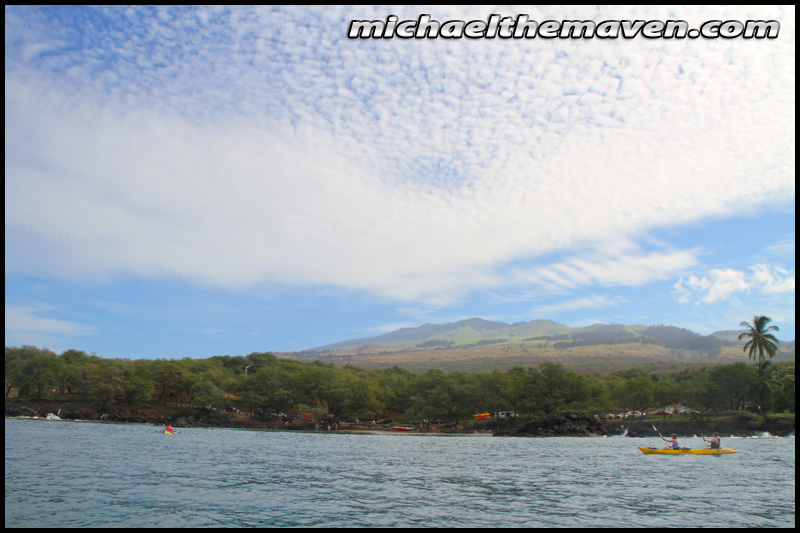 This island Molokini Crater, the tip of a dormant volcano vent, which forms a cresent shaped island which is now a bird reserve. (The Navy used it as a bombing target around WWII).

The woman in the shot is doing another very popular activity called SUP (or Stand Up Paddling). You literally stand on a slightly bigger than a surfboard board and paddle. I tried it once, talk about needing serious balance skills! I spent 2 hours falling off it over and over. Ill need to look into that again soon. 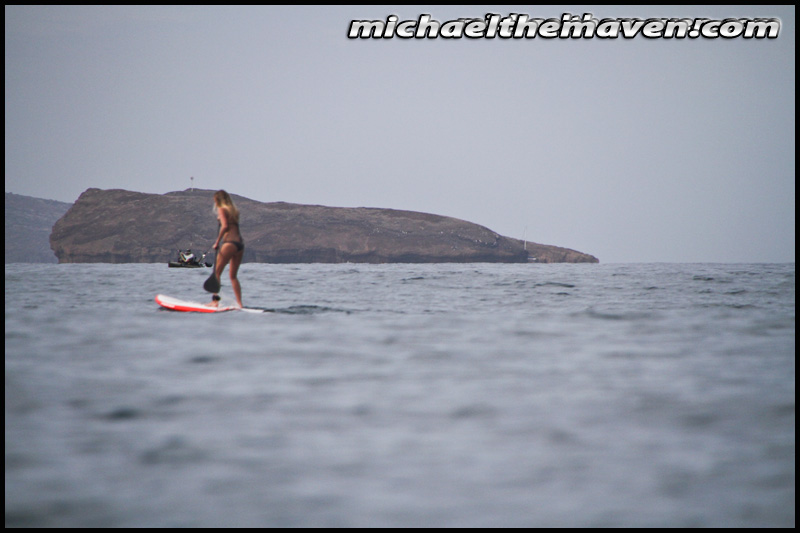 This guy had a fishing Kayak...he was all business. He had a fish finder, leg paddles, outriggers (to keep from tipping over). 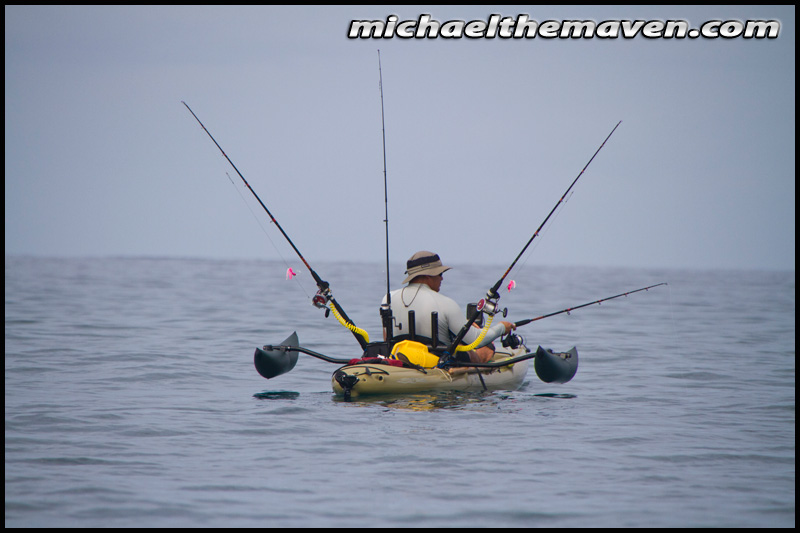 There were several boats out this morning, lots of fishermen and snorkelers. Say...isnt that a bad combo? 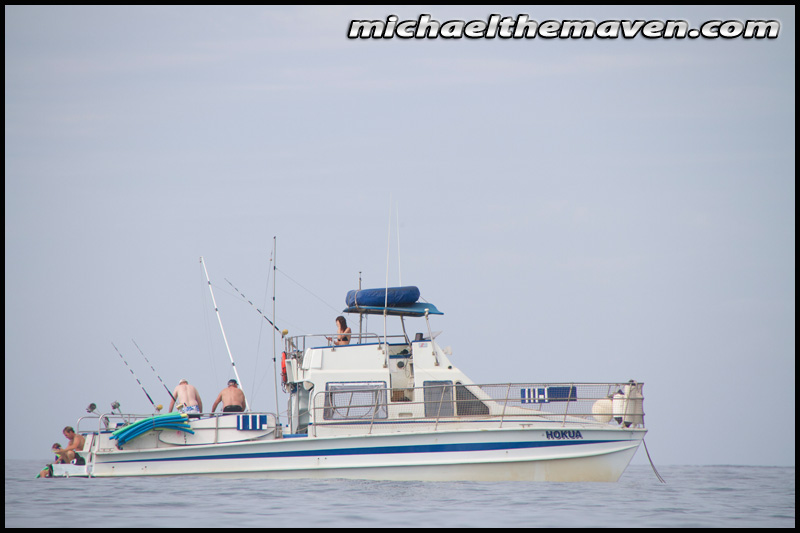 This is what Makena Landing looks like from the water. 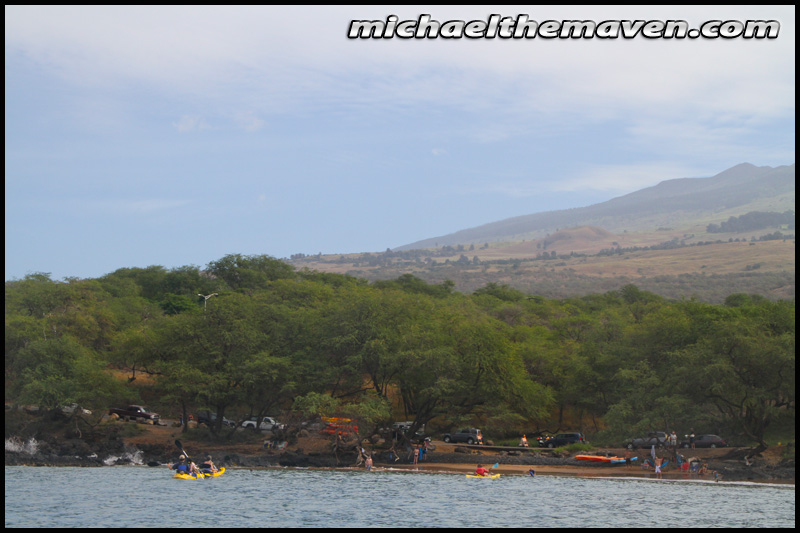 One thing I will have to be careful of is tipping over. A few times when I brought the camera up to my eye, I could feel the Kayak moving around beneath me a little. Still....Im excited to see if I will be able to get any interesting shots!