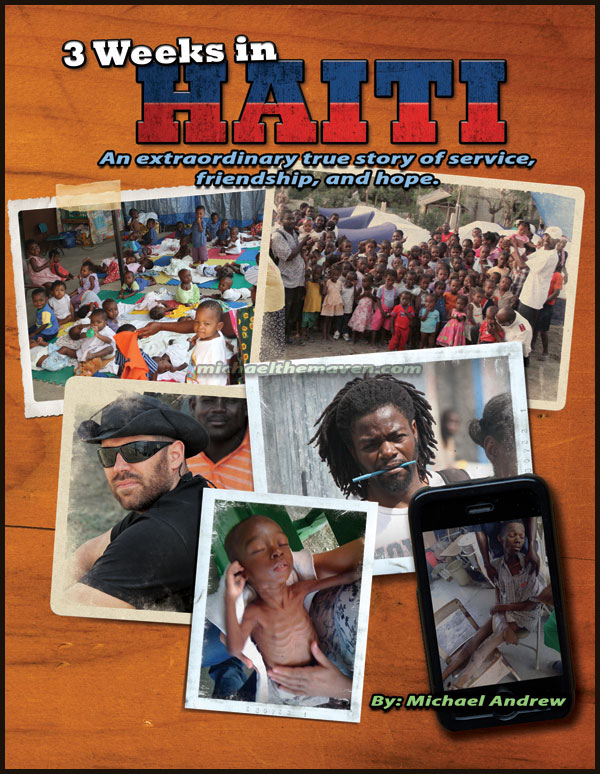 Happy (and a little nervous) to announce that my book "3 Weeks in Haiti" is now available on both Apples iBookstore and Amazon's Kindle Store. Hard copies are still in the works, I would like to get some feedback and make a few more changes before we go to print, but I would imagine that hard copies will be available in the next few months. They will initially be available for purchase directly from my store and hopefully we can get some bigger distribution in the future.

Im pretty proud to have written and published a book. It's one of the things I wanted to do in my lifeâ¦write a good, inspirational book that will be around long after I am gone. Its like leaving a nice little footprint on earth. I also feel like I have a whole lot more to do, and even if I live to a ripe old age, I don't have nearly enough time to do everything I want.

I also have a whole new level of appreciation for authors. It is a serious, ridiculous amount of work, but also having completed it, I know what is involved and know how to better plan and execute next time around. It took me about 17 months to write and go through the editing process. I will do things differently next time. I actually have 2 more books I am thinking about. There is one thats been on my mind for 20 years, I seriously need to get that done.

Initial sales of "3 Weeks in Haiti" will be the startup fundraiser for "Red Lightning" which I have been working on non-stop since Japan. I don't talk about it and wont until it is ready, but what I plan to unveil is without question the biggest thing I have ever attempted. It will either be a home-run or a complete and miserable failure. Sales from the book will help fund many of the Red Lightning projects I have lined up.

I read through a few pages of it today, and I liked it much more than when I had been writing it. It was pleasurable. All the times I had read it before was work. Of those who test read it, most did so in 2-3 days. You can download it to your iPhone or Android device (if you have the Kindle App), but I think it looks best on an iPad. (Fits better, easier to read, fewer pages, etc).

Much gratitude to everyone involved in the trip, the creation of the book and especially you guys for supporting me.

In any event, here is the Synopsis of "3 Weeks in Haiti"

In the days following the Haitian earthquake that claimed more than 230,000 lives on January 12 2010, freelance Photography Instructor Michael Andrew and fellow photographer Brian Owen traveled to the ravaged capital of Port-Au-Prince, Haiti with little more than a desire to help and the gear they could carry. After driving through the Dominican Republic to get to Haiti, the duo make alliances with other aid workers in country, including Mathieu Louis, a naturalized American citizen of Haitian birth, who is searching for his missing family. Abandoned and rejected by the major aid groups already on the ground, Michael and Mathieu take matters into their own hands, hiring a group of local Haitian men to help execute an unprecedented and innovative plan: using GPS technology to locate and tag orphanages that have "slipped through the cracks" of the larger relief effort and convince those in control of aid resources to support these orphanages. This is an extraordinary true story of service, friendship, and hope.