Just walked in the door. Its good to be back on Maui. I sincerely apologize for the lack of personal posting, but I didn't have reliable internet access in Burma and only limited in Japan. Thank you to Adam for updating and keeping things interesting. To be honest, I am completely exhausted right now and am just fighting to stay awake until 8pm. If I take a nap now, I wont be able to fall asleep later tonight.

Probably should give you a little background on the purpose of the trip and how it all unfolded. My friends at Meysen and Grape City in Sendai, Japan have been traveling once or twice a year (for the past 15 years) to Myanmar to work on what they call the "Friendly Myanmar" project, which mostly consists of images and calendars of the Burmese people and landscape. I am confident in saying that the Friendly Myanmar project has the largest collection of images covering Myanmarâ¦ ever. (They have hundreds of thousands of images from many different parts of the country including some of the rare parts and tribes of the land). When I was invited to accompany Paul (Broman) on this trip, I jumped at the opportunity as they have been given unprecedented access, as well as would be on this trip.

Myanmar is strikingly beautiful and amazing. The people are so kind, humble and friendly. I honestly hope the images I post in the next few days reflect this. Paul and I had been planning the trip for several months, but it was unclear if we would be able to get a visa for me, but when we learned I would, I had about a 15 hour window to buy my ticket, get on a plane and make it to the Myanmar Embassy in Japan. I arrived literally a half hour before it closed and if I didn't make it in time it would have been a wasted ticket to Japan. I stayed at Grape City in Sendai for a few days and then traveled with Paul to Myanmar on Tuesday the 11th. We arrived pretty late, but were met by our guide Jack who speaks Burmese and arranged for all of the shooting events of the trip. I personally stayed in a hotel not far from the airport and the following morning Paul, Jack and I had breakfast with a former ambassador who pulled the strings to make the trip happen. These first set of images are from that first morning. 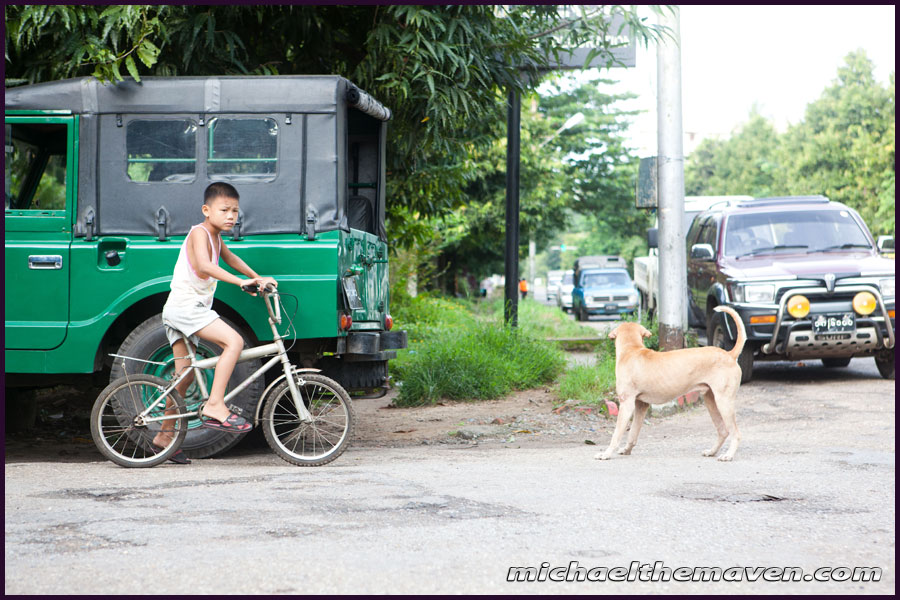 This is a typical street in Yangon. I include it here so you can see the condition of the road as well as the dog. Those dogs are everywhere, but I noticed the dogs were nice. They didnt bark or harass at all. 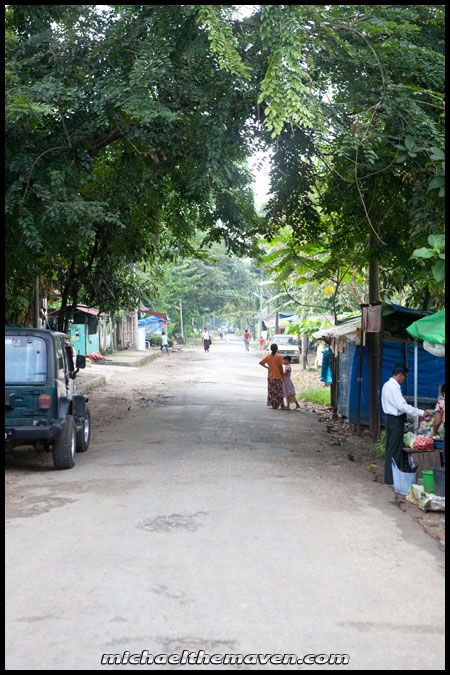 Better shot of the street which I post for comparison with a later location. I was fascinated with all the different forms of transportation. 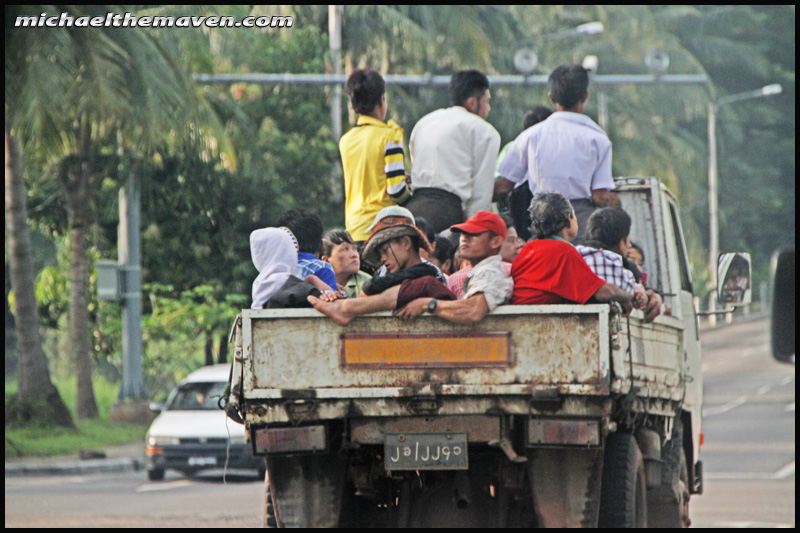 Granted the market where we ate was really for well-to-doers, but at least you can get a feel for the environment: (Many of this images were processed with Paintballer Pro) 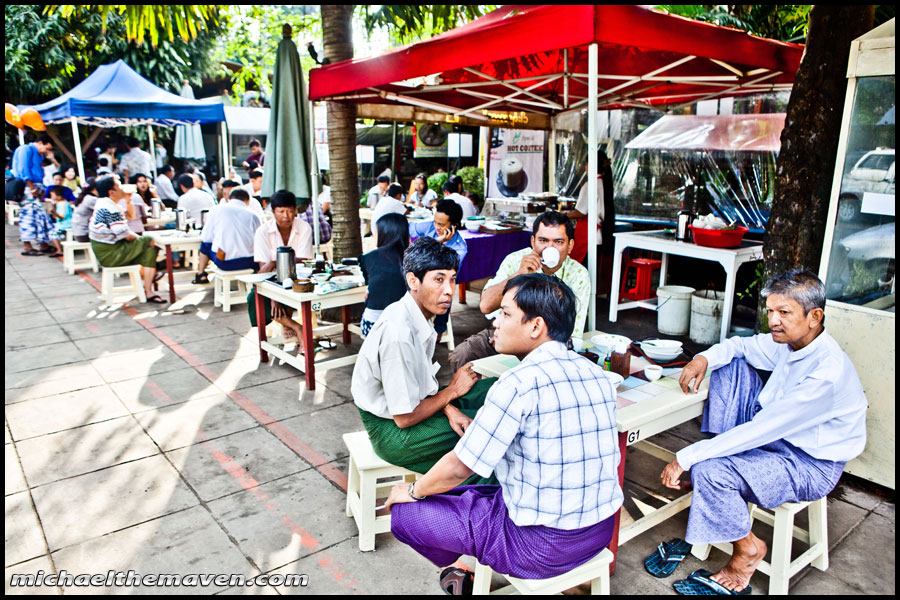 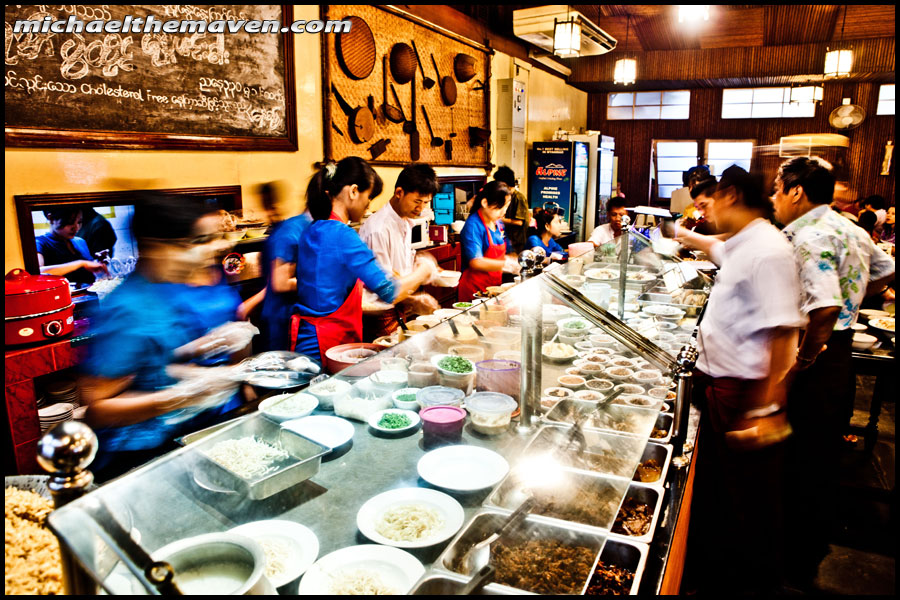 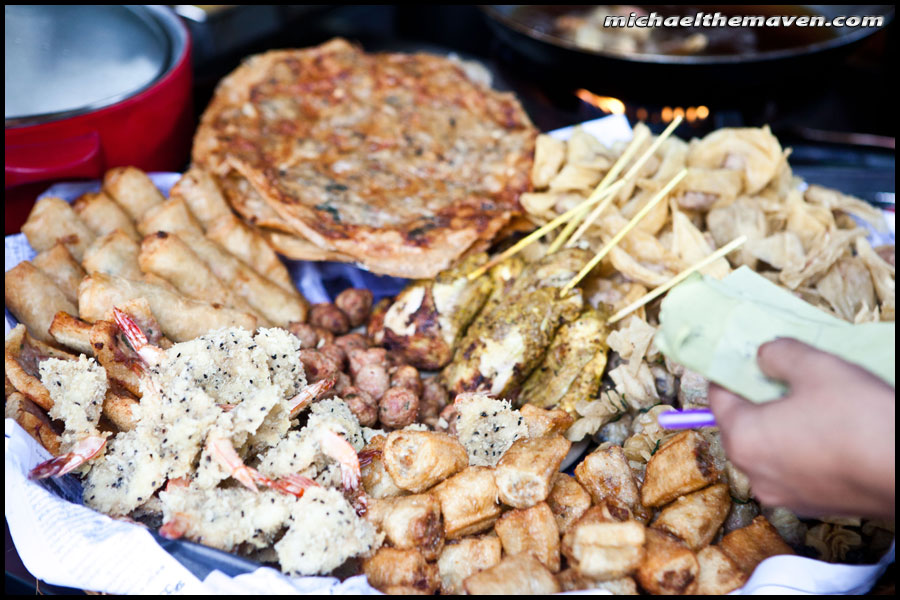 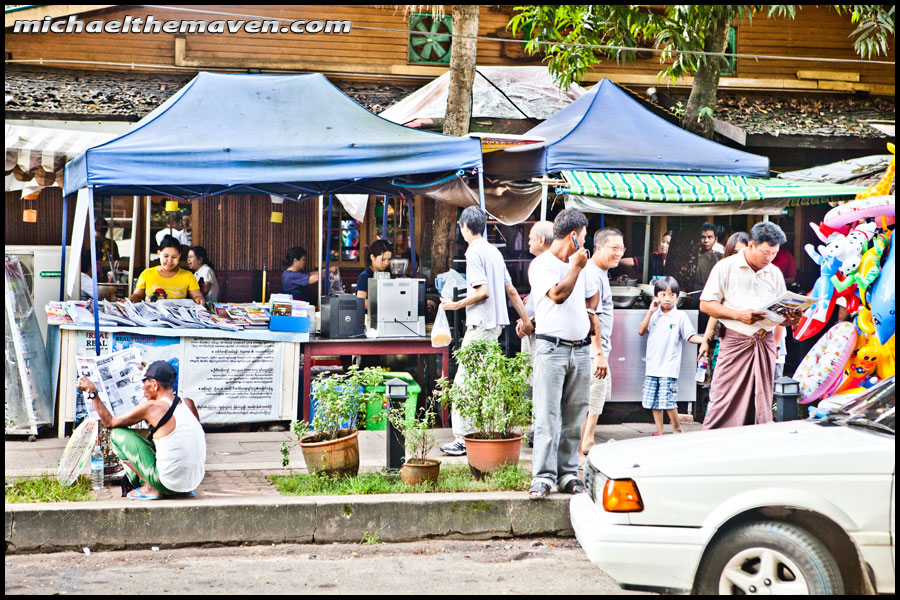 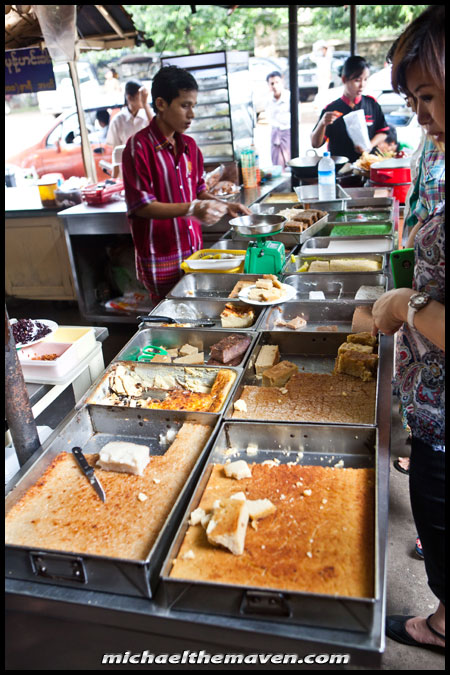 In the afternoon we scouted the Swedagong Pagoda, which is considered the most holy of Buddist Sites in Myanmar. As legend has it, 8 hairs of the Budda are under many layers of domes and on the evening of the 11th would be one of the largest religious festivals of the year called "Festival of the Full Moon". I admit there is a ton I do not know about the Buddist religion (pretty much nothing) but I did note that devotees worship a God depending on which day of the week the were born. In fact, we met several people who did not know what year they were born, but were content in knowing "It was a Tuesday".

We wanted to scout this location out before returning to shoot in the evening, which we did. I grabbed a few shots with my 7D and Tamron 18-270. 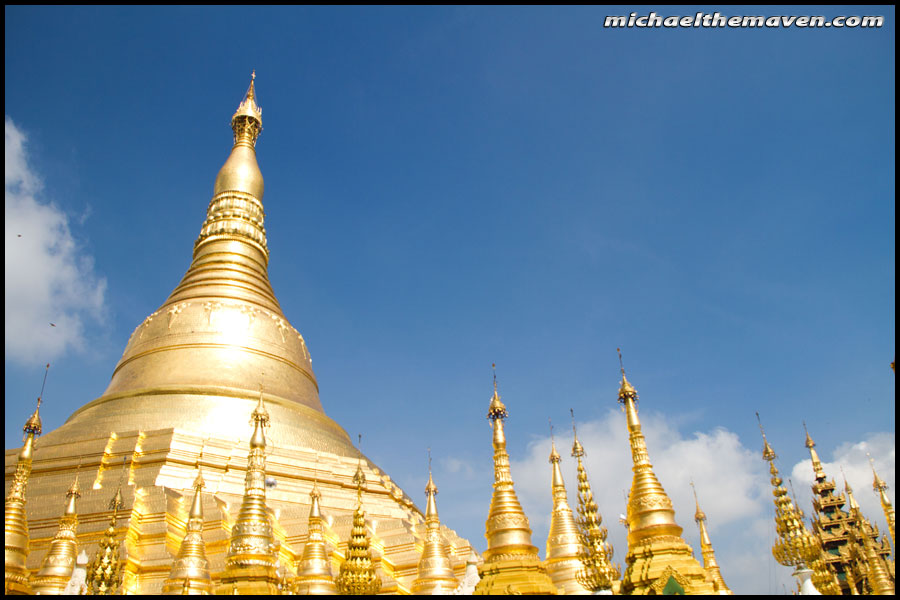 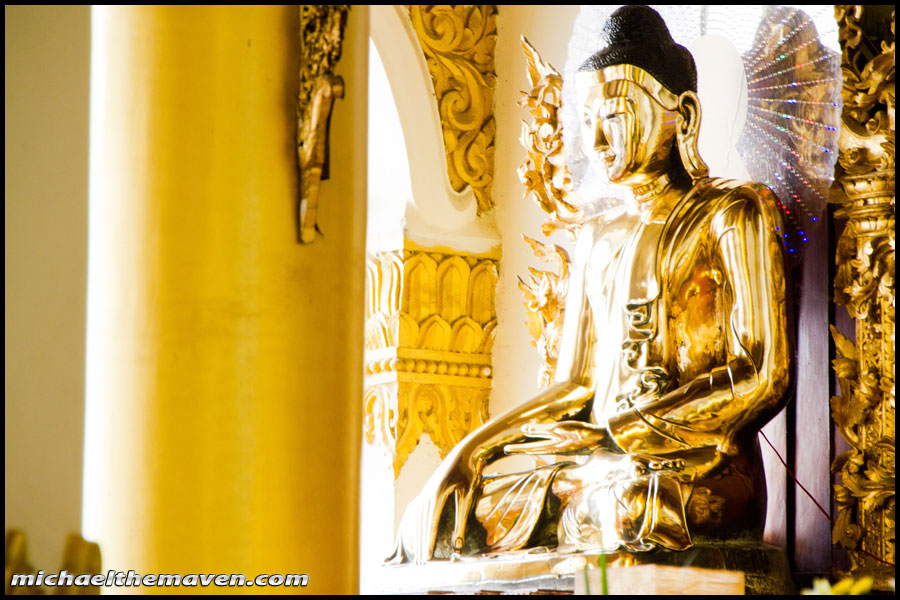 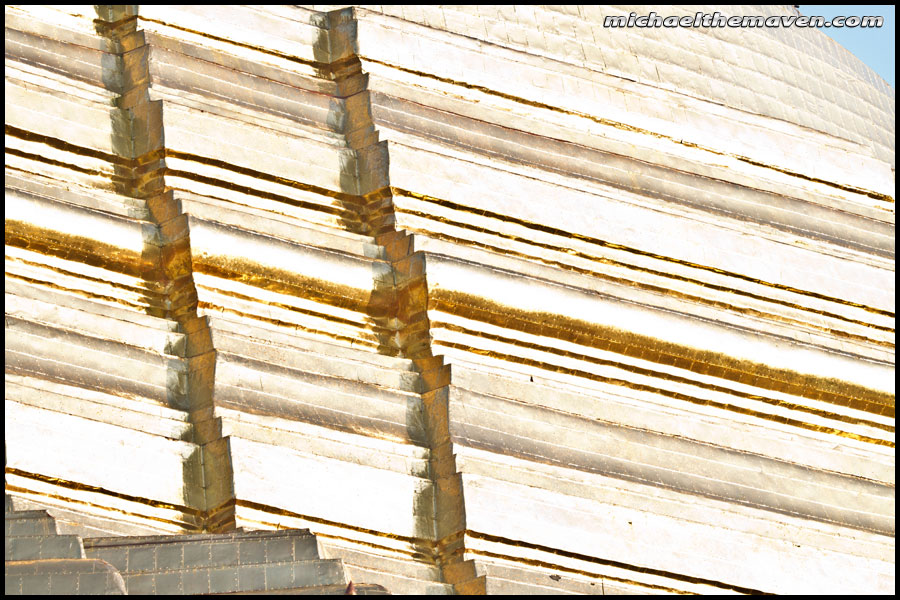 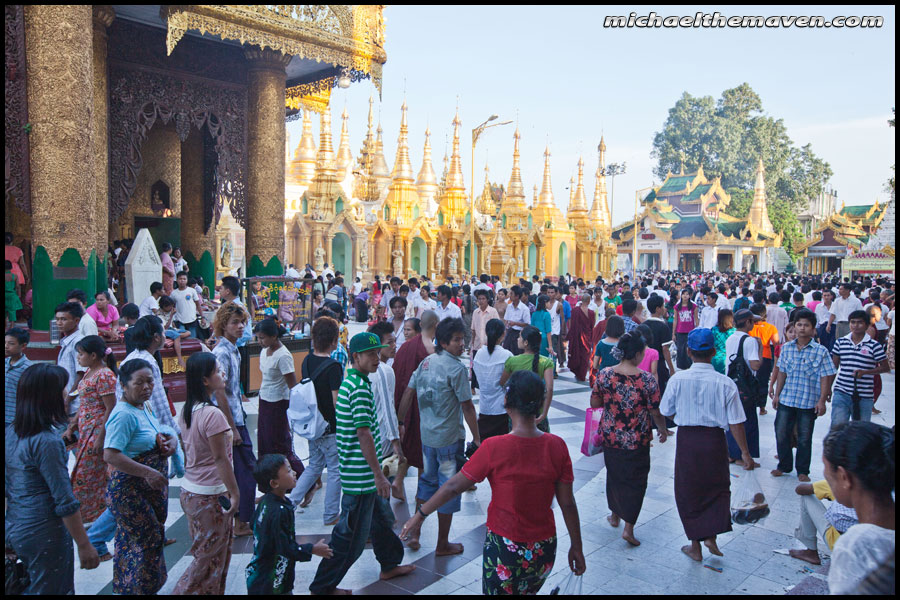 This little girl was begging. She was truly filthy but still managed to melt my heart. 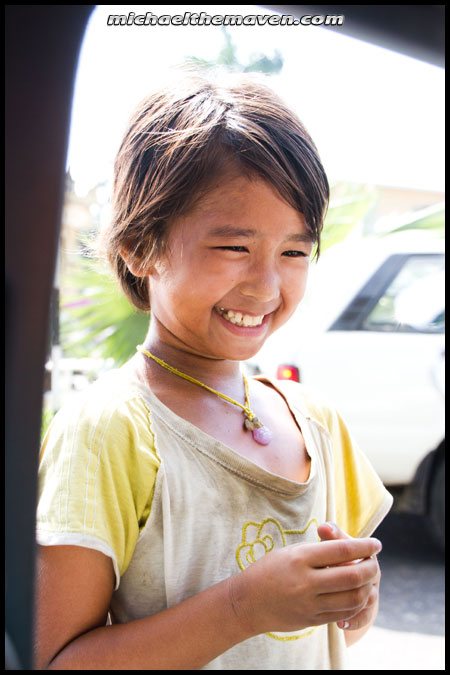 I have a whole other set coming just on the Fesitival we shot that night. It was awesome!

You can read more about the Shwedagon Pagoda here: