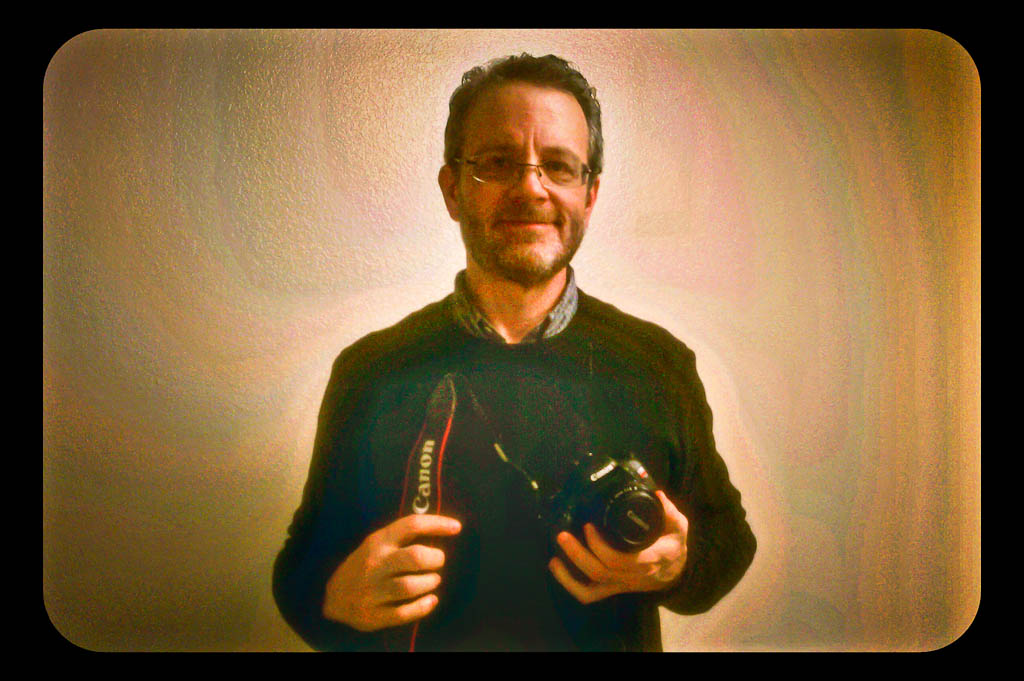 Remember Doug Knisely- the photographer who won the Cell Phone Contest and the Canon T2i? Here is the self portrait with his Grand Prize. Doug sent it in a long time ago, it was buried in emails and I just found it today.

I promised you a picture with the T2i! I was trying to figure out what to do, but it only seemed appropriate for me to take a cell-phone self-portrait, which turned out to be harder than I thought! But it was fun. So, I guess this is probably in a similar vein as the daily cell-phone pictures that I take.

I have been enjoying the T2i since I finally made it back to Chicago to pick it up. I took it on a business trip to Honolulu, along with an 85/1.8 and a really fun Samyang 8mm all-manual fisheye, which was what I ended up using mostly. What a great travel combo... Here are some photos here if you are interested:

The T2i is a fantastic little camera. It's not quite up to the DR of my D700 (I'm spoiled) and low-light work is challenging (AF still seems to be a bit less strong compared to Nikon), but I think I've really good a good feel for its strengths and limitations now.

Thanks again for sponsoring the contest, and I consider it a real honor to win. I really enjoy the cellphone photography almost as much as the more "serious" stuff. The T2i has been extremely useful to me, and I believe I'm going to include it with the fisheye even on serious shooting trips so I can avoid changing lenses. I can't say enough positive about the cheap Samyang 8mm fish; it is really sharp! For urban shooting, that is a great combination. The Canon 85/1.8 is also a great lens, comparatively much better than the Nikon 85/1.8. I'm also interested in exploring video, which is something that Canon does so well (and for which primes are a good choice). My Nikon gear doesn't have video at this point, and the T2i video is excellent.

Best regards in your future endeavors,

P.S. One of my unsolved challenges is how to sync off-camera flash with a cell-phone. Haven't come up with a solution yet, but I haven't given up. :) For this one, I used a floor lamp shining into an umbrella with a white card for fill on camera left. I didn't want too good of light else I would lose the cell-phone low-light look. :)

There is a way to sync off camera flash with cell phones, which I can hopefully write about soon. Thanks for the image and writing Doug! We were very honored to have you win!