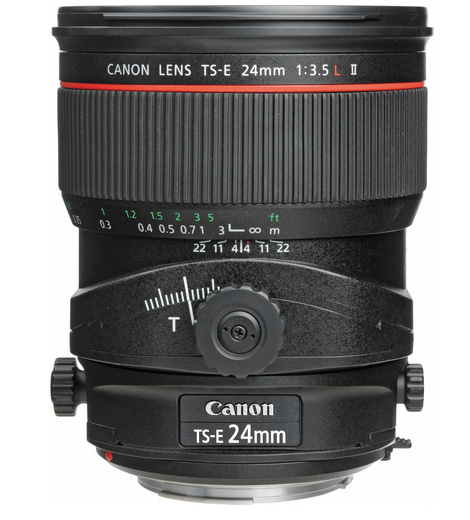 I'm finally in a position where I feel the Canon TS-E 24mm f/3.5 II Tilt-Shift Manual Focus is a good investment for me and will allow me to differentiate my photography look further. There is a lot of competition in the photography world, and something I spend a lot of time on the Photography Business Crash Course DVD are the many ways you can make yourself different and more appealing, instead of copying what everyone else is doing. A Tilt-Shift Lens, which is capable of producing some crazy looks, can become a form of competitive advantage, as long as you are the only one doing it. Something to think about.

Back in 2008, I purchased the original Canon 24mm Tilt Shift and played around with it, but just didn't know what I wanted to do with it or how to operate it. Being that money was tight and it was so expensive, I returned it.

I have second thought that decision since and wished I would have tried a little harder to figure it out. From what I hear, there is a significant learning curve with tilt shift lenses and this is probably what I experienced. There is no auto-focus, (not an issue for me as I love to manually focus with live view), and you have to train your eye to "tune" it to the look you want. I also understand that some of these tweaks are very subtle. In any event, it is rated extremely high by Bhphoto.com users.

Without going into too much detail, I am primarily interested in this lens for the following reasons:

1. Tilting the DOF (typically DOF runs parallel with the sensor, a TS lens allows you to tilt it- this has many extremely cool applications, such as having running lines (not planes) of focus, with extremely blurry edges. Tilting the DOF also allows you to get seemingly unlimited DOF's on certain surfaces, such as a dinner table or field when the DOF is tilted parallel to the surface you are shooting.
2. I understand these lenses are very sharp when shooting wide angle shots, very little periphery distortion. Some Landscape shooters prefer these over any other lens.
3. The ability to introduce (or correct) lens distortion.

Some may argue that many of these types of "looks" can be achieved in Photoshop, but I have always been a big believer of getting it right in camera and then tweaking in post-process if needed.

I am also curious about Video shooting applications. If you saw "The Social Network"- the rowing ragatta sequence seems to have been shot with a tilt shift lens. It was my favorite part of the movie, simply because it looked so DANG cool. With the ability to record video in HD on the 5Dii and 7D, I have to try this out a little to see if the look can be matched (or at least close to it). Check it out here:

If Tilt Shift Lenses prove difficult to learn, there is an outside possibility I will make a Crash Course on using them- but in either case I am excited to expand my repertoire and look forward to posting the results.