By now you have recognized the continuing theme of shooting Sunsets, which by themselves as we have seen are tricky. Being that I have access to most of my gear now, today we are going to take it a step further and tackle a very technical and difficult shot: Sunset Portraits.

This is difficult because if you are exposing for the sun, your subjects are going to be dark, like the silhouette shot of my father a few days ago. One piece of hardware I am still missing is my giant Strobe battery, so the question my Dad and I were asking was: "Could you get away with using Speedlites only for quality Sunset Portraits?" I am happy to report that, yesâ¦.if you have 2-3 of them, it's doable. Not easy, but doable. If you have my Canon Speedlite Crash Course DVD you will understand most of what was going on here, if not this may sound like gibberish. (If you have a Speedlite, that DVD is an absolute must!)

Sunset was about 6:28pm. My good friends Warren, Marshall and their wives are visiting for the next few days, so around 5:38pm, I ask them if they would be interested in trying it out. Quickly collecting my camera bag, 2 - Canon 580 Ex II Speedlites , I rushed to go pick up my Dad who also has a third 580 Ex II. We met up with Warren and Co around 6:05, and at 6:12pm I found myself literally running to my favorite portrait location near the Grand Waliea hotel, I needed about 5 minutes to compose the background and get set up. It was a race against the sunâ¦.

Slapped the tripod down about 2 feet off the ground, locked the 5Dii in with my 24-70 2.8, and put the ST-E2 Transmitter on top. Powered on the 3 Speedlites, switched them to slave, and took 2 test shots of the sky, exposing for the sun.

By now everyone had caught up, and within seconds Marshall and Ang were sitting on the rocks in front of me. I had a little problemâ¦. where to focus? , backlit subjects are pretty much impossible to focus.

This is how I solved it: Flipped lens switch to manual, briefly removed the ST-E2 (because you cannot get an accurate exposure preview with this on), slowed the exposure to 1/15, which allowed me to see their faces- then used the Manual Live View Zoom technique I show on the Advanced Photography Techniques DVD, which allowed me to get a sharp focus, slapped the ST-E2 on, and reverted back to 1/100 shutter speed.

I had Warren and Kearstin holding the Speedlites 1&2 on my left and my Dad was holding a large diffuser disk. A translucent disk can convert small light sources such as Speedlites into a relatively large light source (see 365 Project Day 122)

I grabbed the third Speedlite, set the camera to 2 second timer, and hit the shutter button.

This was the first shot, which I thought was the best: 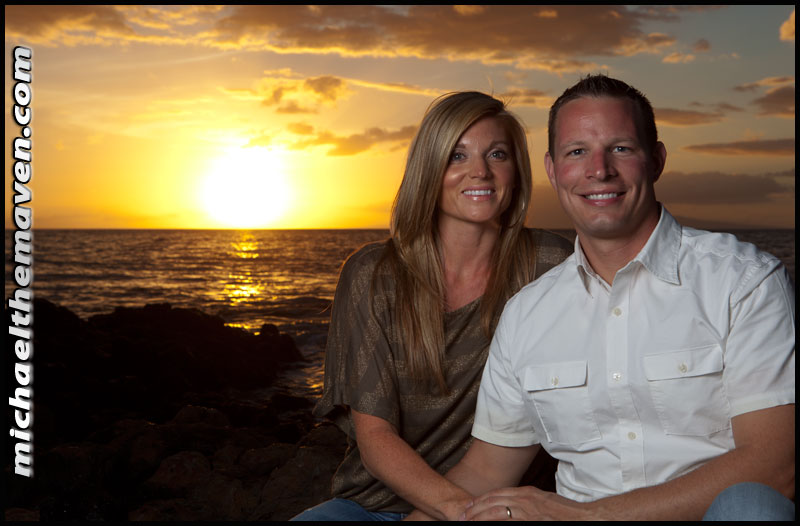 This was the setup diagram:
Next Warren and Kearstin jumped in and Marshall and Ang held the Speedlites, both of these first shots were straight out of the camera. Not great, but not bad either- solid starting points. 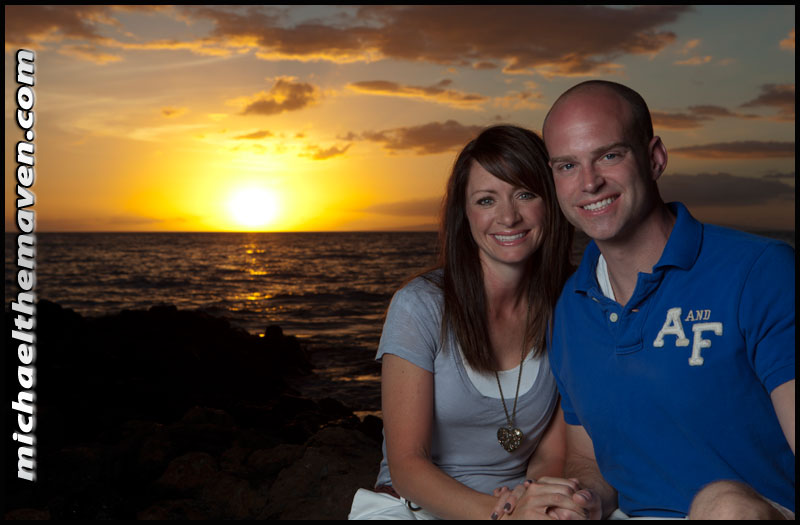 I took a total of 19 shots (including test shots and a few group shots) in about 11 minutes and we were done. It's amazing how fast the Sun moves at Sunset, but I was very happy that we were able to get it working.

One thing I noticed was the missing textures from the rocks. To solve this, I took a long exposure "plate" shot of just the rocks properly exposed. This would essentially allow me to "paint rocks in" if I needed to. (It is very important that you do not move the camera when doing something like this- you want all those edges and curves of the rocks to line up exactly the same.) 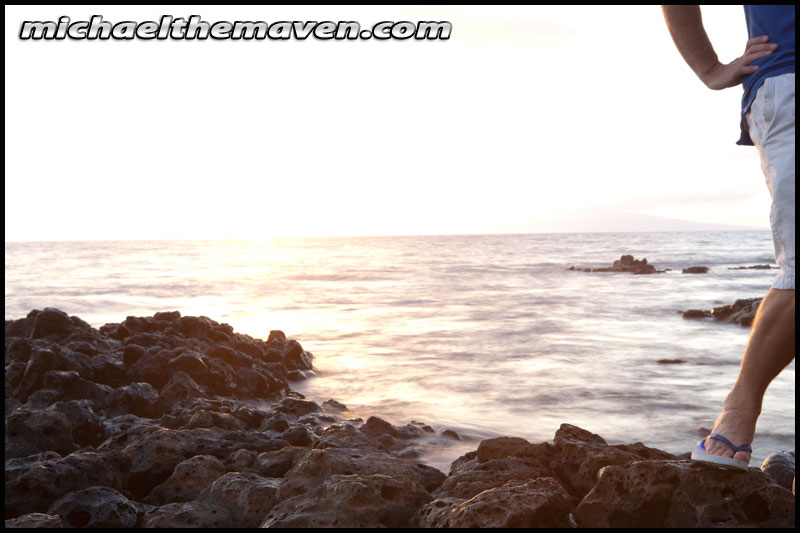 Same exact concept as yesterdays "blending" example, only this time I am "blending" just the rocks in, or "painting" them in with a layer mask. 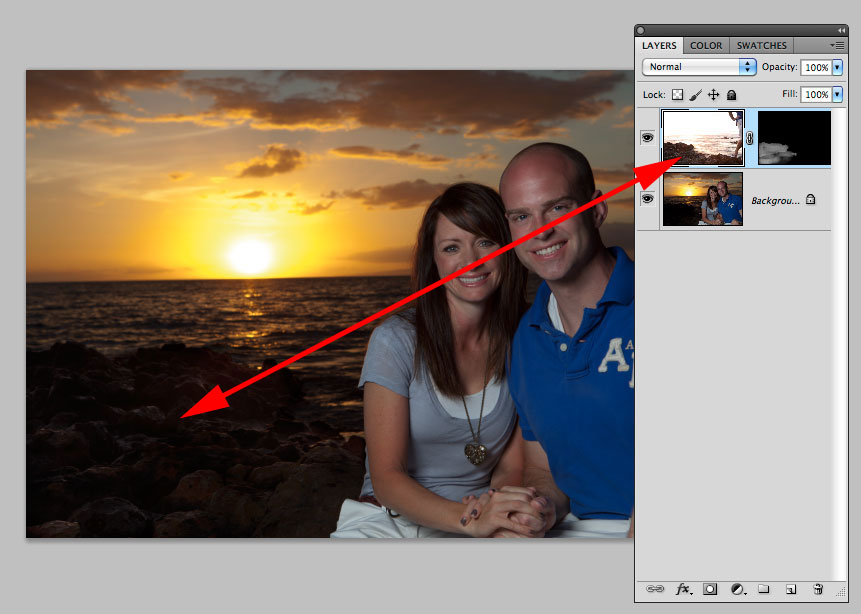 Popped both images with Michael Andrew Lollipops Â®, curves bump, straighten out horizon, and that's it! 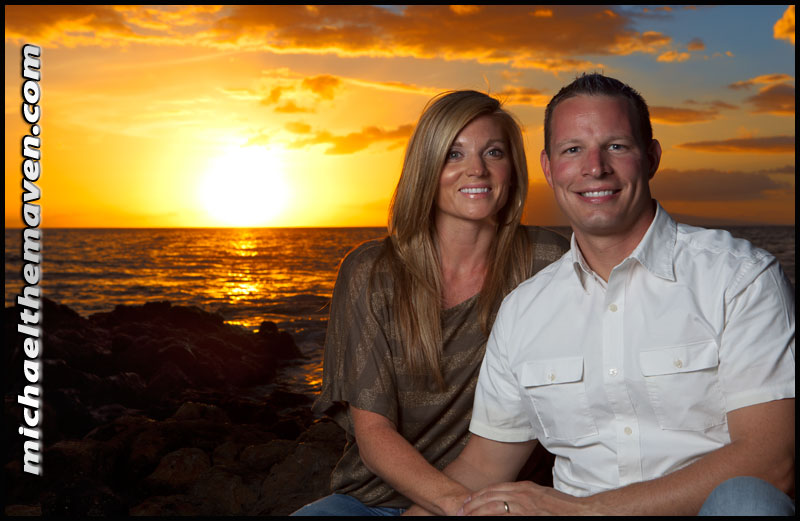 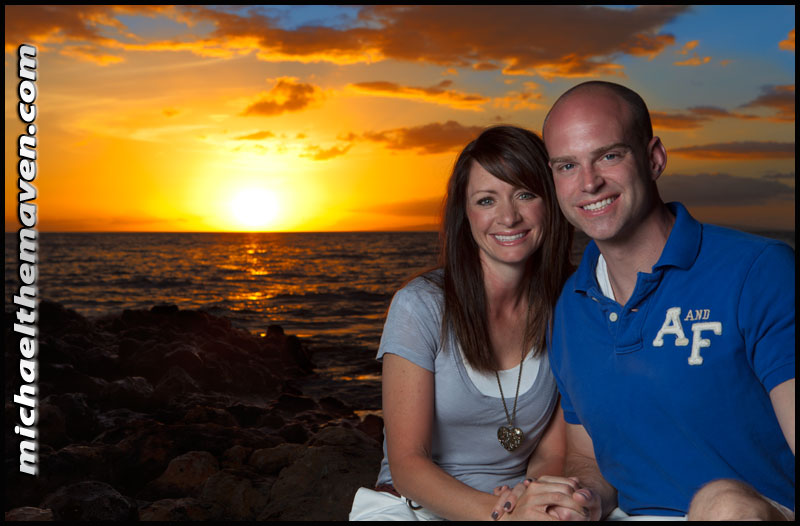