I love it when companies with poor customer service really believe that there is no repercussion for giving said service to someone like.....me. Yes, I will blog about it. US Airways = SUCKY. 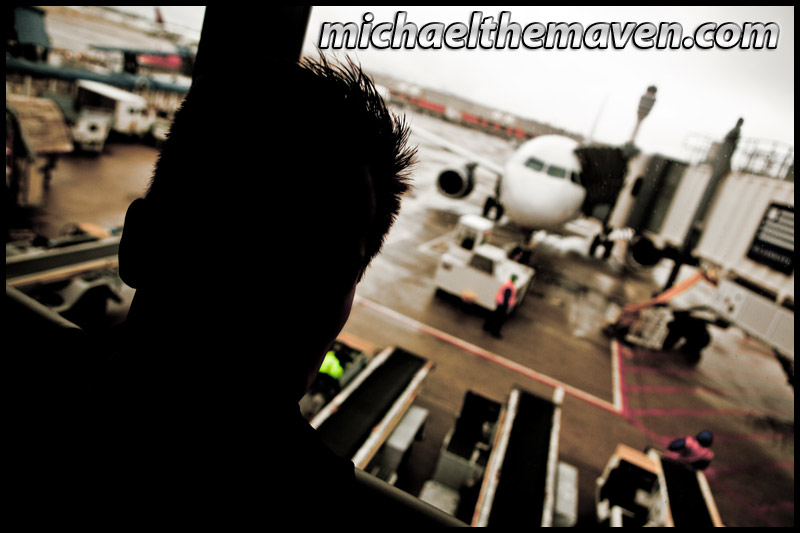 We have all heard the horror stories, plane pulls out from the terminal and for whatever reason, weather, mechanical problems, etc it ends up sitting on the tarmac for 7-9 hours, with no air conditioning, no food or water, etc in what turns to be a form of temporary kidnapping as passengers are not allowed off the plane.

Today on the way back to Mesa I found myself in this situation. Please donât misunderstand, I know things happen and I am a pretty patient person. The problem with this scenario, was the way US Airways communicated with us. We didnât even know there was an issue until after an hour on the tarmac when the pilot just said âwe seem to have an engine problem and are waiting for the mechanicâ No information about how long it would take, what the issue was, what our options were, etc.

After an hour and a half we pulled back into the terminal, but they had a several people standing in the doorway. The supervisor, whose name was Michael âCâ (they wouldnât give me his last name after repeated requests to get it) comes on and reassured everyone who would be missing a connecting flight would be rebooked in Phoenix. I thought this was a good move on his part, but I noticed a tone in his voice that was alarming, as ifâ¦he knew something we didnât and he didnât want us to know.

He then said we could leave the plane if we wanted to, but we would be âon our ownâ. He and the flight attendants said this several times. The pilot then gets on the intercom and says a part in the engine was broken and the mechanic had found a âwork aroundâ but we would need more fuel, would have to fly at a lower altitude (and I assumed it would be a longer flight). Not exactly comforting. This has nothing to do with the fact that they had turned off the AC and the babies started crying.

So just over two hours into it, with no expected leave time, no update, etc. I had enough, grabbed my bag and started to walk off the plane. The first stewardess asked me if I wanted to leave and she then tried to talk me out of it. I was told that this was the only US Airways flight to Phoenix and all other flights with other airlines were booked, there wasnât a SINGLE seat available with ANY other airline. I was suspicious of this but didnât care.

âNo sir, your options are to either wait this out or pay for your own way home with another airlineâ¦maybe tomorrow sometime.â

I really didnât care at this point and I wanted to get out of there, so I told her to step aside. When I get to the doorway, I am greeted by the supervisor, who then tells me all the same things. There was no other flight, no seats, no anything and my only choice was to continue to wait (for who knows how long) or to try to fly out tomorrow. He also said I wouldnât be refunded any money if I walked off the plane of my own choice. I told him I was sick of the lack of communication, it wasnât fair to US Airwayâs customers to leave them hanging the way they did, and the plane stunk. He tells me âAll the customers on this flight are happy. They understand and are being patientâ. I knew this wasnât true because I had been talking with everyone around me. He asked again âAre you really sure you want to get off the plane?â Like it was some critical life decision and I was âyeah, get out of the way.â

The instant I started to walk up the ramp, everything changed. One of the flight attendants ran up next to me and asked- âSoâ¦what do you want to do?â

âWhat do you mean?â I asked âIâm getting off the planeâ
âYa but what are you going to do to get home?â
âIll just get a ticket with a more competent airline companyâ I answered

At this point we were back in the terminal, just asks for my stub and then says this jaw dropper: âLet me put you on the next flight, it leaves in just a few hoursâ. (!!!)

So this is the gameâ¦.if you find yourself in a âstuck on the tarmacâ situation, it appears there are certain rules the airline company has to follow, but they donât want you to know. This is me speculating, but there has to be a point where they MUST let you off the plane and no matter what they tell you in the plane, you DO have rights to get another ticket, either with them or with another airline, especially in cases of mechanical malfunction. 3 hours after we were supposed to leave, I saw that the plane was still sitting there.

Iâm under the impression that the flight supervisor was doing his best to keep everyone happy, but he flat out lied to the passengers, There WERE other options, but because he didnât want to have to deal with it, he would rather just misinform them into believing sticking around was the best choice. Think about it, 150+ passengers, 2-3 hours of their day was âstolenâ- no repercussions, so additional fees, nothing. The customers âateâ this. Maybe this is what the supervisor really meant. âWe can push our customers around as long as they are willing to put up with itâ.

Donât ever let companies take advantage of you like this. Once I was back in the terminal, I felt a tremendous sense of relief, and yes, while I had to wait another 2 hours for my next flight, I felt wonderful that I chose not to be pushed around.

If you find yourself stuck on a tarmac, 2 hours is plenty of time for them to either correct the issue or communicate specifically as to how long it will take. If they donât, at that point I donât think it is unreasonable to insist they let you off the plane, and yes, they will get you an alternative flight.

If the entire plane did this collectively, I doubt this âmislead the passenger policyâ would continue.